Regularization of the Kernel Matrix via Covariance Matrix Shrinkage Estimation 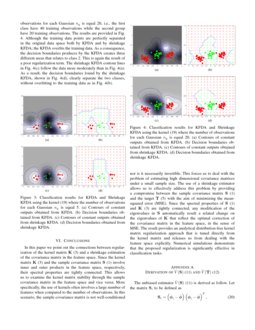 Multiple Measurement Vectors Problem: A Decoupling Property and its Applications

Machine learning tasks often require a data pre-processing stage also known as feature extraction. One common and powerful way of extracting features is by employing the "kernel trick" concept, formulated as an inner product in a feature space, which allows us to build interesting extensions to existing algorithms. The general idea is that, if an algorithm can be formulated in a way that the input vector enters only in a scalar product form, then that scalar product can be replaced with some other choice of kernel. Many models for regression and classification can be reformulated in terms of a dual representation in which the kernel function arises naturally. For instance, the kernel trick technique can be applied to principal component analysis in order to develop a nonlinear variant of principal component analysis (PCA) [1, 2], while other examples include nearest-neighborclassifiers [3], kernel Fisher discriminant analysis (KFDA)[4] and support vector machines (SVM’s) [5].

The aforementioned schemes attempt to discover structure in the data. For example, in pattern recognition and regression estimation, we are given a training set of inputs and outputs, and attempt to infer the test outputs for unseen inputs. This is only possible if we have some measure for determining how the test set is related to the train set. Generally speaking, we expect similar inputs to lead to similar outputs whereby similarity is commonly measured in terms of a loss function. The latter indicates how well the inferred outputs match the true outputs. The training stage commonly involves a risk function that contains a term measuring the loss incurred for the training patterns. However, in order to generalize well to the test data, it is also necessary to control the complexity of the model used for explaining the training data, a task that is often accomplished with the help of regularization terms

[5, Ch. 4]. Minimizing the empirical risk without regularization terms can lead to numerical instabilities and poor generalization performance. Therefore, it is essential to utilize objective functions that involve both the empirical loss term and a regularization term. A possible way to avoid the aforementioned problems is to use the class of admissible solutions [6], often referred to in statistics as shrinkage estimators [7].

There already exists an extensive body of literature concerning the small sample size scenario [9, 10, 11, 12, 13], achieved by incorporating additional knowledge into the estimation process, such as sparseness [14, 15, 16], a graph model [17], [18], a factor model [19], or other references therein. However, such additional knowledge is often either unavailable or is not trustworthy. In the absence of further knowledge about the structure of the true covariance matrix, the most successful approach so far has been shrinkage estimation [20].

The rest of the paper is organized as follows. In Section 2, we formulate the problem. In Section 3 we introduce the shrinkage estimation and derive its optimal solution with respect to the kernel matrix. In Section 4 we examine the relation between the kernel matrix and the sample covariance matrix. Section 5 presents numerical simulation results for classification tasks. Section 6 summarizes our principal conclusions. To make for easier reading, the derivations of some of our results appear in the appendix.

Notation: We depict vectors in lowercase boldface letters and matrices in uppercase boldface. The transpose operator is denoted as (⋅)T. The trace and the Frobenius norm of a matrix are denoted as Tr(⋅) and ∥⋅∥F

, respectively. The identity matrix is denoted as

is a random matrix, we use the notation

(the sum of variances of the elements in

Let {xi}ni=1,xi∈Rq be a sample of independent identical distributed (i.i.d.) q-dimensional vectors, and let ϕ(x) be a non-linear mapping to a p-dimensional feature space with a covariance matrix Σ of size p×p. When the number of observations n is large (i.e., n≫p), the most common estimator of Σ is the sample covariance matrix S of size p×p, defined as

where Φ is the p×n matrix design matrix whose ith column is given by ϕi=ϕ(xi). The matrix S (1

) is an unbiased estimator of

where the kernel matrix of size n×n is defined by

Multiplication by the centering matrix H makes the data centered in the feature space [5, Ch. 14.2]. Since the use of kernels mostly involves large number of features p, compared to the number of observations n, we are forced to deal with the problem of estimating high dimensional covariance matrices under a small sample size. In this scenario, the sample covariance matrix S (1) is not well-conditioned nor is it necessarily invertible. When n≤p, the inversion cannot be computed at all [22, Sec. 2.2]. Although significant progress in dealing with the small sample size problem has been made by various regularization methods [9, 23, 24], for example, by improving the accuracy of the pseudo-inverse of S [25, 26] or by regularizing S for specific tasks in discriminant analysis [27, 28, 29, 30, 31]; these methods require the explicit expression of the feature space ϕ(x). In general, when using kernels, the feature space is only known implicitly.

In the following section, we develop an analytical solution to regularized the kernel matrix K (3) by examining the relationship between Σ, S (1) and K (3) through a shrinkage estimation for covariance matrices. It has been demonstrated by [32]

that the largest sample eigenvalues of

S are systematically biased upwards, while the smallest ones downwards. This bias can be corrected by pulling down the largest eigenvalues and pushing up the smallest ones, toward the grand mean of all sample eigenvalues. We tackle this problem through the use of a shrinkage estimator that offers a compromise between the sample covariance matrix and a well-conditioned matrix (also known as the "target") with the aim of minimizing the mean-squared error (MSE). Since the spectral properties of S (1) and K (3) are tightly connected, any modification of the eigenvalues in S automatically result a related change on the eigenvalues of K that reflect the optimal estimation of the covariance matrix in the feature space, in the sense of MSE.

and can be given by the distribution-free formula

The scalar λO is called the oracle shrinkage coefficient, since it depends on the unknown covariance matrix Σ. Therefore, λO (8) must be estimated. As we will show next, the optimal shrinkage coefficient of the covariance matrix can be estimated directly from the kernel matrix K (3), without explicitly dealing with ϕ(x), commonly unknown in practice.

In this section, we show that the unbiased estimator of λO (9), denoted as ^λO, can be written as a function of the kernel matrix K (3). It has been shown in [34, Sec. 3.B] that the target T (5) is a private case of the general target framework which allows to reformulate λO (8) as

where the symbol ^ indicates an estimated value of the parameter. The estimated oracle shrinkage coefficient ^λO (10) is bounded in [0,1] in order to keep the shrinkage estimator ^Σ(^λO) positive-definite as required from a covariance matrix [34, 35]. The unbiased estimators of ^V(S) and ^V(T) are derived in appendix A and can be written as a function of the kernel matrix K (3), i.e.,

are the eigenvector and eigenvalue matrices of

Σ, respectively, such that Σ=VΛVT.

indicate that the eigenvalues of S are more dispersed around their mean then the true ones, where the excess dispersion is equal to V(S). The excess dispersion implies that the largest eigenvalues of S are biased upwards while the smallest downwards. Therefore, we can improve upon the sample covariance matrix by shrinking its eigenvalues toward their mean ¯ζ (15). This is done practically via the shrinkage estimator ^Σ(λ) (4) where the optimal shrinkage coefficient in the sense of MSE is equal to ^λO (10).

The other (p−n+1) eigenvalues of S are all zero and their eigenvectors are indefinite.

The procedure of regularize the kernel matrix K (3) by

is therefore equivalent to the correction of the first n eigenvalues of the sample covariance matrix S (1) with respect to their mean in the feature space, which is optimal in the sense of MSE. We examine the regularized kernel matrix ^K(^λO) (18) in the next section.

) behaves, we consider a two-class classification problem. The first class observations are generated from a two Gaussians in a two-dimensional space with standard deviation of 0.1, centered at

(−0.5,−0.2) and (0.5,0). The second class observations are generated from a two-dimensional Gaussian with standard deviation of 0.1, centered at (0,0). The problem is not linearly separable, giving raise to the use of kernels. In order to distinguish between the two classes, the kernel Fisher discriminant analysis (KFDA) [4]

is used by utilizing the radial basis function kernel

with σ2=0.1. We regularize the within-class scatter of the KFDA using ^K(^λO) (18) versus the proposed fixed regularization of λ=10−3 [4]. These two scenarios are referred to as “shrinkage KFDA” and “KFDA”, respectively. We run the experiments when the number of training observation per Gaussian, denoted by ng, varies from 3 to 30. Each simulation is repeated 100 times and the average values of the misclassification rates as a function of ng are depicted in Fig. 1.

As can be seen from Fig. 1, the shrinkage KFDA outperforms the KFDA for any value of ng

. We used the paired t-test in order to evaluate the null hypothesis in which the difference between the two misclassification rates over the 100 simulations comes from a population with mean equal to zero. The t-test rejects the null hypothesis at the 99% significance level, meaning that the shrinkage KFDA consistently outperformed the KFDA.

The same experiment is repeated where the number of observations for each Gaussian ng is equal 20, i.e., the first class have 40 training observations while the second group have 20 training observations. The results are provided in Fig. 4. Although the training data points are perfectly separated in the original data space both by KFDA and by shrinkage KFDA; the KFDA overfits the training data. As a consequence, the decision boundaries produces by the KFDA creates three different areas that relates to class 2. This is again the result of a poor regularization term. The shrinkage KFDA contour lines in Fig. 4(c) follow the data more moderately than in Fig. 4(a). As a result, the decision boundaries found by the shrinkage KFDA, shown in Fig. 4(d), clearly separate the two classes, without overfitting to the training data as in Fig. 4(b).

The unbiased estimator ^V(S) (11) is derived as follow. Let the matrix Si to be defined as

where the last term equals zero (observed after entering the sum into the inner product), which simplifies the expression (21) to

By substituting (24) into (23), the expression in the expectation is therefore the unbiased estimator ^V(S) (11).

Therefore, the unbiased estimator of V(T) is