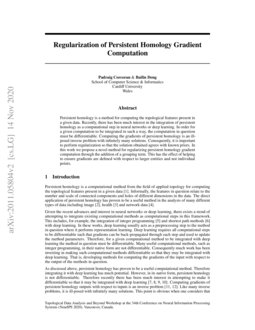 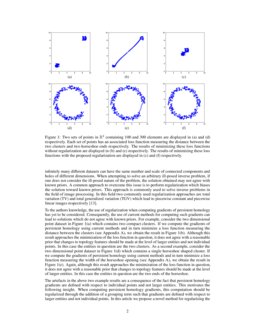 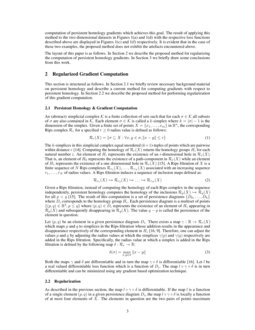 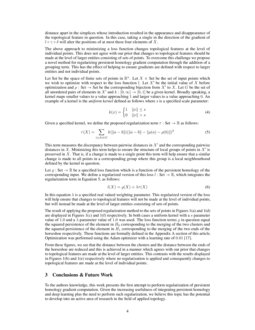 The Structure of Morphisms in Persistent Homology, I. Functorial Dualities

A Topology Layer for Machine Learning

Persistent Homology for Resource Coverage: A Case Study of Access to Polling Sites

It is important to choose the geographical distribution of public resour...
Abigail Hickok, et al. ∙

Persistent homology is a computational method from the field of applied topology for computing the topological features present in a given data edelsbrunner2010 . Informally, the features in question relate to the number and scale of connected components and holes of different dimensions in the data. The direct application of persistent homology has proven to be a useful method in the analysis of many different types of data including image carlsson2008local , health nicolau2011topology and network data corcoran2020stable .

As discussed above, persistent homology has proven to be a useful computational method. Therefore integrating it with deep learning has much potential. However, in its native form, persistent homology is not differentiable. Therefore recently there has been much interest in attempting to make it differentiable so that it may be integrated with deep learning chen2019topological ; wangtopogan ; gabrielsson2020topology ; Moor19Topological . Computing gradients of persistent homology outputs with respect to inputs is an inverse problem oudot2020inverse ; solomon2020fast . Like many inverse problems, it is ill-posed with infinitely many solutions. This point is obvious when one considers that infinitely many different datasets can have the same number and scale of connected components and holes of different dimensions. When attempting to solve an arbitrary ill-posed inverse problem, if one does not consider the ill-posed nature of the problem, the solution obtained may not agree with known priors. A common approach to overcome this issue is to perform regularization which biases the solution toward known priors. This approach is commonly used to solve inverse problems in the field of image processing. In this field two commonly used regularization approaches are total variation (TV) and total generalized variation (TGV) which lead to piecewise constant and piecewise linear images respectively lunz2018adversarial .

To the authors knowledge, the use of regularization when computing gradients of persistent homology has yet to be considered. Consequently, the use of current methods for computing such gradients can lead to solutions which do not agree with known priors. For example, consider the two dimensional point dataset in Figure 1

which contains two compact clusters. If we compute the gradients of persistent homology using current methods and in turn minimize a loss function measuring the distance between the clusters (see Appendix

The artefacts in the above two example results are a consequence of the fact that persistent homology gradients are defined with respect to individual points and not larger entities. This motivates the following insight. When computing persistent homology gradients, this computation should be regularized through the addition of a grouping term such that gradients are defined with respect to larger entities and not individual points. In this article we propose a novel method for regularizing the computation of persistent homology gradients which achieves this goal. The result of applying this method to the two dimensional datasets in Figures 1 and 1 with the respective loss functions described above are displayed in Figures 1 and 1 respectively. It is evident that in the case of these two examples, the proposed method does not exhibit the artefacts encountered above.

The layout of this paper is as follows. In Section 2 we describe the proposed method for regularizing the computation of persistent homology gradients. In Section 3 we briefly draw some conclusions from this work.

An (abstract) simplicial complex K is a finite collection of sets such that for each σ∈K all subsets of σ are also contained in K. Each element σ∈K is called a k-simplex where k=|σ|−1 is the dimension of the simplex. Given a finite set of points X={x1,…,xm} in Rn, the corresponding Rips complex Rr for a specified r≥0 radius value is defined as follows:

Given a Rips filtration, instead of computing the homology of each Rips complex in the sequence independently, persistent homology computes the homology of the inclusions Rp(X)\xhookrightarrowRq(X) for all p<q otter2017roadmap . The result of this computation is a set of persistence diagrams {D0,…,Dh} where Di corresponds to the homology group Hi. Each persistence diagram is a multiset of points {(p,q)∈R2,p≤q} where (p,q)∈Di represents the existence of an element of Hi appearing in Rp(X) and subsequently disappearing in Rq(X). The value q−p is called the persistence of the element in question.

As described in the previous section, the map l∘γ∘δ is differentiable. If the map l is a function of a single element (p,q) in a given persistence diagram Di, the map l∘γ∘δ is locally a function of at most four elements of X. The elements in question are the two pairs of points maximum distance apart in the simplices whose introduction resulted in the appearance and disappearance of the topological feature in question. In this case, taking a single in the direction of the gradient of l∘γ∘δ will alter the positions of at most these four elements of X.

The above approach to minimizing a loss function changes topological features at the level of individual points. This does not agree with our prior that changes to topological features should be made at the level of larger entities consisting of sets of points. To overcome this challenge we propose a novel method for regularizing persistent homology gradient computation through the addition of a grouping term. This has the effect of helping to ensure gradients are defined with respect to larger entities and not individual points.

Let Set be the space of finite sets of points in Rn. Let X∈Set be the set of input points which we wish to optimize with respect to the loss function l. Let X′ be the initial value of X before optimization and ρ:Set→Set be the corresponding bijection from X′ to X. Let G be the set of all unordered pairs of elements in X′ and k:[0,∞]→[0,1] be a given kernel. Broadly speaking, a kernel maps smaller values to a value approaching 1 and larger values to a value approaching 0. An example of a kernel is the uniform kernel defined as follows where s is a specified scale parameter:

Given a specified kernel, we define the proposed regularization term τ:Set→R as follows:

This term measures the discrepancy between pairwise distances in X′ and the corresponding pairwise distances in X. Minimizing this term helps to ensure the structure of local groups of points in X′ is preserved in X. That is, if a change is made to a single point this term will help ensure that a similar change is made to all points in a corresponding group where this group is a local neighbourhood defined by the kernel in question.

Let ϱ:Set→R be a specified loss function which is a function of the persistent homology of the corresponding input. We define a regularized version of this loss l:Set→R, which integrates the regularization term in Equation 5, as follows:

To the authors knowledge, this work presents the first attempt to perform regularization of persistent homology gradient computation. Given the increasing usefulness of integrating persistent homology and deep learning plus the need to perform such regularization, we believe this topic has the potential to develop into an active area of research in the field of applied topology.

Appendix A Loss Functions for Figure 1

In this section we formally define the loss function terms ϱ in Equation 6 applied to the datasets in Figures 1 and 1 to obtain the results in Figures 1, 1, 1 and 1.

Let D be the space of persistence diagrams. Let ϱ0:D→R be a loss function defined as:

This loss function was applied to the persistence diagram D0 corresponding to the dataset in Figure 1 to compute the results in Figures 1 and 1.

Let ϱ0:D→R be the loss function defined as:

This loss function was applied to the persistence diagram D1 corresponding to the dataset in Figure 1 to compute the results in Figures 1 and 1.