In this paper we propose to extend the definition of fuzzy transform in order to consider an interpolation of models that are richer than the standard fuzzy transform. We focus on polynomial models, linear in particular, although the approach can be easily applied to other classes of models. As an example of application, we consider the smoothing of time series in finance. A comparison with moving averages is performed using NIFTY 50 stock market index. Experimental results show that a regression driven fuzzy transform (RDFT) provides a smoothing approximation of time series, similar to moving average, but with a smaller delay. This is an important feature for finance and other application, where time plays a key role. 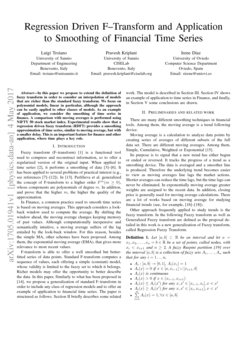 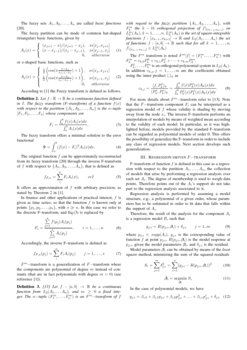 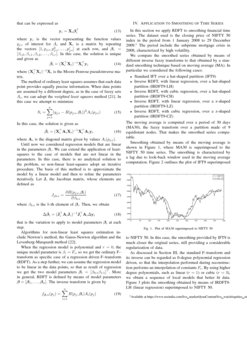 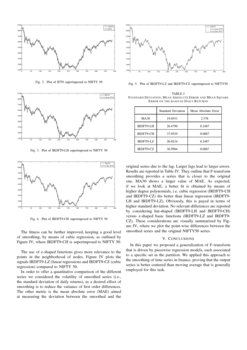 tl;dr: no, it cannot, at least not on average on the standard archive pr...
James Large, et al. ∙

Sleep apnea is a disorder that has serious consequences for the pediatri...
Prachi Loliencar, et al. ∙

Fuzzy transform (F–transform) [1] is a functional tool used to compress and reconstruct information, so to offer a regularized version of the original input. When applied to time series [2], it performs a smoothing of data [3, 4, 5, 6]. It has been applied to several problems of practical interest (e.g., see references [7, 8, 9, 10, 11, 12]). In [13]. Perfilieva et al. generalized the concept of F-transform to a higher order Fm(m≥0), whose components are polynomials of degree m. In addition, and prove that the higher m, the higher the quality of the approximation.

In Finance, a common practice used to smooth time series is based on moving averages. This approach considers a look-back window used to compute the average. By shifting the window ahead, the moving average changes keeping memory of past values. Although computationally inexpensive and semantically intuitive, a moving average suffers of the lag entailed by the look-back window. For this reason, besides the simple MA, other schemes have been proposed. Among them, the exponential moving average (EMA), that gives more relevance to most recent values.

F-transform is able to offer a well smoothed but better-fitted series of data points. Standard F-transform computes a sequence of values, each offering a simple (constant) model, whose validity is limited to the fuzzy set to which it belongs. Richer models may offer the opportunity to better describe the data. In this paper, Similarly to what has been proposed in [14], we propose a generalization of standard F–transform in order to include any class of regression models and to offer an example of application to financial time series. The paper is structured as follows. Section II briefly describes some related work. The model is described in Section III. Section IV shows an example of application to time series in Finance, and finally, in Section V some conclusions are drawn.

There are many different smoothing techniques in financial tools. Among them, the moving average is a trend following device.

Moving average is a calculation to analyze data points by creating series of averages of different subsets of the full data set. There are different moving averages. Among them, Simple, Cumulative, Weighted or Exponential [15].

Its purpose is to signal that a new trend has either begun or ended or reversed. It tracks the progress of a trend as a smoothing device. The data is averaged and a smoother line is produced. Therefore the underlying trend becomes easier to view as moving averages line lags the market actions. Shorter averages can reduce the time lags, but the time lags can never be eliminated. In exponentially moving average greater weights are assigned to the recent data. In addition, closing price is generally used for moving average calculations. There are a lot of works based on moving average for studying financial trends (see, for example, [16, 17, 18]).

The fuzzy partition can be made of common hat-shaped (triangular) basic functions, given by

or z-shaped basic functions, such as

According to [1] the Fuzzy transform is defined as follows.

Let f:R→R be a continuous function defined in I. The fuzzy transform (F–transform) of a function f(x) with respect to the partition {A1,A2,…,An} is the n–tuple [F1,F2,…,Fn] whose components are

The fuzzy transform offers a minimal solution to the error functional

The original function f can be approximately reconstructed from its fuzzy transform [20] through the inverse F-transform of f with respect to {A1,A2,…,An}, that is defined as

It offers an approximation of f with arbitrary precision, as stated by Theorem 2 in [1].

In finance and other applications of practical interest, f is given as time series, so that the function f is known only at points {p1,p2,…,ps}, with s≫n. In this case we refer to the discrete F–transform, and Eq.(3) is replaced by

Accordingly, the inverse F–transform is defined as

Fm−transform is a generalization of F−transform where the components are polynomial of degree m instead of constants (that are in fact polynomials with degree m=0) (see reference [1]).

P1k,…,Pmk is an orthogonal polynomial system in L2(Ak). In addition ck,j,j=1,…,m are the coefficients obtained using the inner product ⟨.⟩k as

For more details about Fm−transform refer to [13]. Note that the F−transform component Fi can be interpreted as a regression model of f whose validity is shading by moving away from the node xi. The inverse F–transform performs an interpolation of models by means of weighted mean according to the validity of each model. In particular, as it was highlighted before, models provided by the standard F–transform can be regarded as polynomial models of order 0. This offers the possibility of generalize the F–transform in order to include any class of regression models. Next section develops such generalization.

F–transform of function f is defined in this case as a regression with respect to the partition A1,…,An

, the collection of models that arise by performing a regression analysis over each set

Ai. The degree of membership is used to weigh data points. Therefore points out of the Ai’s support do not take part to the regression analysis associated to it.

Regression analysis is performed by assuming a model structure, e.g., a polynomial of a given order, whose parameters has to be estimated in order to fit data that falls within the support of

Therefore, the result of the analysis for the component Ai is a regression model R, such that

where pj:i∈supp(Ai), yj:i is the corresponding value of function f at point pj:i, R(pj:i,βi) is the model response at pj:i, given the model parameters βi, and δj:i is the residual.

Model parameters βi can be obtained by means of the least square method, minimizing the sum of the squared residuals

In the case of polynomial models, we have

that can be expressed as

is the vector representing the function values

The method of ordinary least squares assumes that each data point provides equally precise information. When data points are assumed by a different degree, as in the case of fuzzy sets

Ai, we can adopt the weighted least squares method [21]. In this case we attempt to minimize

In this case, the solution is given as

where Ai is the diagonal matrix given by values Ai(pj:i).

Until now we considered regression models that are linear in the parameters βi. We can extend the application of least-squares to the case of models that are not linear in the parameters. In this case, there is no analytical solution to the problem, so non-linear least-squares adopt an iterative procedure. The basis of this method is to approximate the model by a linear model and then to refine the parameters iteratively. Let Ji the Jacobian matrix, whose elements are defined as

where βh:i is the h-th element of βi. Then, we obtain

that is the variation to apply to model parameters βi at each step.

Algorithms for non-linear least squares estimation include Newton’s method, the Gauss-Newton algorithm and the Levenberg-Marquardt method [22].

In this section we apply RDFT to smoothing financial time series. The dataset used is the closing price of NIFTY 50 index in the period from 1 January 2008 to 29 December 2009.111Available at https://www.nseindia.com/live_market/dynaContent/live_watch/equities_stock_watch.htm The period include the subprime mortgage crisis in 2008, characterized by high volatility.

We compare the smoothed series obtained by means of different inverse fuzzy transforms to that obtained by a standard smoothing technique based on moving average (MA). In particular we considered the following cases:

The moving average is computed over a period of 30 days (MA30), the fuzzy transform over a partition made of 9 equidistant nodes. That makes the smoothed series comparable.

Smoothing obtained by means of the moving average is shown in Figure 1, where MA30 is superimposed to the NIFTY 50 time series. The smoothing is characterized by a lag due to look-back window used in the moving average computation.

Figure 2 outlines the plot of IFT9 superimposed to NIFTY 50. In this case, the smoothing provided by IFT9 is much closer the original series, still providing a considerable regularization of data.

As discussed in Section III, the standard F–transform and its inverse can be regarded as 0-degree polynomial regression driven, so that the interpolation performed during reconstruction performs an interpolation of constants Fi. By using higher degree polynomials, such as linear (r=1) or cubic (r=3), we obtain a sequence of local models that better fit data. Figure 3 plots the smoothing obtained by means of IRDFT9-LH (linear regression) superimposed to NIFTY 50.

The fitness can be further improved, keeping a good level of smoothing, by means of cubic regression, as outlined by Figure 4, where IRDFT9-CH is superimposed to NIFTY 50.

The use of z-shaped functions gives more relevance to the points in the neighborhood of nodes. Figure 5 plots the signals IRDFT9-LZ (linear regression) and IRDFT9-CZ (cubic regression) compared to NIFTY 50.

In order to offer a quantitative comparison of the different series we considered the volatility of smoothed series (i.e., the standard deviation of daily returns), as a desired effect of smoothing is to reduce the variance of first order differences. The other metric is the mean absolute error (MAE) aimed at measuring the deviation between the smoothed and the original series due to the lag. Larger lags lead to larger errors. Results are reported in Table

I. They outline that F-transform smoothing provides a series that is closer to the original one. MA30 shows a larger value of MAE. As expected, if we look at MAE, a better fit is obtained by means of higher degree polynomials, i.e. cubic regression (IRDFT9-CH and IRDFT9-CZ) fits better than linear regression (IRDFT9-LH and IRDFT9-LZ). Obviously, this is payed in terms of higher standard deviation. No relevant differences are reported by considering hat-shaped (IRDFT9-LH and IRDFT9-CH) versus z-shaped basic functions (IRDFT9-LZ and IRDFT9-CZ). These considerations are visually summarized by Figure 6, where we plot the point-wise differences between the smoothed series and the original NIFTY50 series.

In this paper we proposed a generalization of F–transform that is driven by piecewise regression models, each associated to a specific set in the partition. We applied this approach to the smoothing of time series in finance, proving that the output series is better centered than moving average that is generally employed for this task.