In this paper, we propose three novel and important methods for the registration of histological images for 3D reconstruction. First, possible intensity variations and nonstandardness in images are corrected by an intensity standardization process which maps the image scale into a standard scale where the similar intensities correspond to similar tissues meaning. Second, 2D histological images are mapped into a feature space where continuous variables are used as high confidence image features for accurate registration. Third, we propose an automatic best reference slice selection algorithm that improves reconstruction quality based on both image entropy and mean square error of the registration process. We demonstrate that the choice of reference slice has a significant impact on registration error, standardization, feature space and entropy information. After 2D histological slices are registered through an affine transformation with respect to an automatically chosen reference, the 3D volume is reconstructed by co-registering 2D slices elastically. 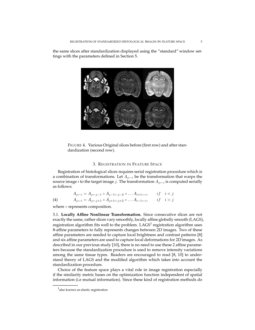 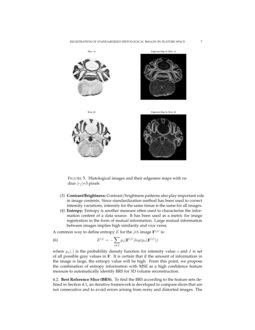 2D imaging methods, such as optical microscopy, are still preferable to 3D imaging methods due to their high level of specificity and high resolution properties. Histological sections (slices) obtained through 2D imaging methods provide useful information for the diagnosis or the study of pathology. 3D volume reconstruction from these 2D slices is required in order to fully appreciate anatomical structures [1].

Typically, a 3D volume is reconstructed by registering (aligning) the 2D sections with respect to a chosen reference and stacking successive aligned sections [2]. As the acquisition processes of different 2D histological images are performed independently, slice misalignment and deformation is often unavoidable. Figure 1 shows examples of histological slices with non-cohorent distortions, tears, hole and missing parts. The deformation varies from section to section and non-cohorent distortions may exist in consecutive sections. Choosing an arbitrary slice as a reference slice leads to errors in 3D volume reconstruction, hence, the reference slice should be chosen properly not to contain distortions in order to achive high quality volume reconstruction [3].

Although intensity differences in consecutive slices are generally assumed to be small and are often ignored in most of the existing nonrigid registration methods, it is shown that intensity variations for the same tissues can lead to large registration errors and the reconstructed 3D volume will not be smooth [3, 10, 6, 7, 4, 2, 11]. Figure 2 demonstrates that consecutive slices may have different brightness/contrast characteristics even for the same tissue regions. Similar to our previous study on MRI [10], to overcome intensity variations, we perform registration of histological images in standard intensity scale where similar intensities represent similar tissues.

3). Third, we propose an automatic best reference slice (BRS) selection algorithm based on iterative assessment of image entropy and mean squre error (MSE) of the registration process in order to improve the quality of the reconstructed volume (Section 4). Quantitative evaluation of reconstructed volume is given in Section 5. The paper is concluded with future research directions and conclusion (Section 6).

Image intensity variations are not only influenced by the distribution of light sources, but also the content (different tissues) of the images as different tissues show different intensity levels. It is important to transform the image scale into the standard intensity scale so that for the same body region, intensities will be similar [3, 10, 12]. This is called the intensity standardization. As can be seen from Figure 2, some edges are clearly visible in one image, but are not visible in the other. This shows the need for intensity standardization.

Standardization is a non-linear pre-processing technique which maps image intensity histogram (scale) into a standard intensity histogram through a training and a transformation step. In the training step, a set of images of the same body region are given as input to ”learn” histogram-specific parameters, or the landmarks. In the transformation step, any given image is standardized with the estimated histogram-specific landmarks obtained from the training step.

It has been proven that image histograms of the same body region are always of the same type, and most of the histograms of biomedical images are bimodal [13]. Since the histological rat brain images we study also produce bimodal intensity histograms, we extract histogram specific landmarks according to bimodal distribution as suggested in [12, 13].

In bimodal histograms, one of the histogram specific landmarks is the mode (μ) representing the main foreground object in the image, as depicted in Figure 3(a).

where we can increase the number of histogram specific landmarks by setting more percentiles values for the main foreground μ [12, 13].

where ⌈.⌉ converts any number y∈Re to the closest integer Y such that Y ≥y or ≤y. Further details and proofs can be found in [13].

Since consecutive slices are not exactly the same, rather slices vary smoothly, locally affine globally smooth (LAGS), registration algorithm fits well to the problem. LAGS111also known as elastic registration registration algorithm uses 8-affine parameters to fully represents changes between 2D images. Two of these affine parameters are needed to capture local brightness and contrast patterns [8] and six affine parameters are used to capture local deformations for 2D images. As described in our previous study [10], there is no need to use these 2 affine parameters because the standardization procedure is used to remove intensity variations among the same tissue types. Readers are encouraged to read [8, 10] to understand theory of LAGS and the modified algorithm which takes into account the standardization procedure.

Choice of the feature space plays a vital role in image registration especially if the similarity metric bases on the optimization function independent of spatial information (i.e mutual information). Since these kind of registration methods do not take into consideration the spatial information of pixel/voxel intensity distribution/variation, the optimization algorithm may get stuck in local maximum resulting in misalignment. Defining a feature space capturing variations of gray-level characteristics will overcome the drawbacks of intensity based approaches. To align the images globally, we used a particular feature space which represents an image by continuous variables, called edgeness, and describes the intensity variance of a predefined region over the image

We represent an image (section/slice) by a pair F=(F,g) where F is a two-dimensional (2-D) array of pixels and g is intensity function defined on F, assigning an integer intensity value for each pixel o∈F. A particular feature space that allows the representation of an image by continuous variables is called the edgeness space [14], which describes the intensity variance of local regions in an image. At image coordinate r0, the edgeness is represented by

where rf represents a fixed radius. Note that this is not just to determine whether a specific voxel/pixel is edge or not [14]. Instead, within a specified radius rf, the image feature content is forced to stay beyond a variation level which prevents the registration process from getting stuck in local maxima. Edgeness maps for various slices are shown in Figure 5.

A common way to define entropy E for the jth image F(j) is:

is the probability density function for intensity value

o and I is set of all possible gray values in F. It is certain that if the amount of information in the image is large, the entropy value will be high. From this point, we propose the combination of entropy information with MSE as a high confidence feature measure to automatically identify BRS for 3D volume reconstruction.

To find the BRS according to the feature sets defined in Section 4.1, an iterative framework is developed to compare slices that are not consecutive and to avoid errors arising from noisy and distorted images. The framework divides slices into subvolumes. Let M be total number of slices, Vk the kth subvolumes where k=1,..,vol and Nk the number of slices in subvolume k such that: ∑volk=1Nk=M.

where MSEi,j is feature space based mean square error after registering the image i with image j and

We have registered a stack of 350 Nissl-stained slices acquired by cyro-sectioning coronally an adult mouse brain with a resolution of 590x520 pixels at a resolution of 15μm and 24-bit color format [15].

Based on the experiments in [12, 13], minimum and maximum percentile values are set to pc1=0 and pc2=99.8 respectively. In the standard scale, s1 and s2 are set to s1=1 and s2=4095. Examples of intensity mapping for a couple of images, source and target, can be found in [10] where it can be seen that after standardization, histograms are more similar in shape and location. It means that intensities have tissue-specific meaning after standardization [3, 10, 12, 13].

In order to achieve low computational cost and accelerate the registration process, coarse-to-fine multiresolution framework is used. Registration in finer level is performed with the result of the previous level as initial condition. This process continues until the finest level is reached. To ensure a more accurate solution, we perform standardization after each warping/interpolation. Either small or large, intensity changes caused by the interpolation are captured by standardization

The CAM measure relies on the assumption that if a point is perfectly aligned, it lies midway between its corresponding points on neighbors’ sections. To compute the CAM measure for a given image, first of all, corresponding points for specifed control points in the image are identified. The associated confidence values in two adjacent images are then calculated. If the confidence is greater than a pre-defined threshold τ

, square root of the summation of the deformation vectors are added to the cumulative sum. Finally, the cumulative sum is normalized by the number of pixels which have contributed. Note that CAM gives one value for each image, therefore, mean or standard deviation of CAM values of serial images are needed to compare reconstructions. Reconstucted volume is smooth if the mean or the standard deviation of CAM measures are low and vice versa.

Summary of the changes in mean and standard deviation in CAM values is given by Table 1. The values in Table 1 are obtained by considering the worst case which uses all the slices instead of just a few slices from the middle of the stack as defined in [16], and τ is set to 0. Even for the worst case, CAM values indicate that a smooth volume is constructed with the proposed framework. While mean values dropped by 7.29% and 18.69%, the standard deviation values dropped by 24.46% and 27.73% for affine and locally affine registered stacks respectively with respect to rigid registered stacks. Figure 6 shows CAM values for each section. Registered stacks has lower CAM values which means that smoother reconstructed surface/volume is obtained.

In this study, we present a novel method for reconstructing 3D rat brain volumes from 2D histological images. The framework bases on three fundamental premises. (1) All histological images must be standardized for accurate registration leading to 3D volume reconstruction. (2) For accurate and succesful registrations in consecutive slices, a reliable feature space must be taken into account. (3) For automatic 3D volume reconstruction, the reference slice must be chosen properly by avoiding slices with high noise, distortions and other factors. To validate the reconstructed volume, the smoothness of the volume is considered. Experimental results indicate that the reconstructed volume is highly accurate.

We wish to thank Prof. Jayaram K. Udupa, Image Processing Group of University of Pennsylvania, for his comments and suggestions.