Word embeddings, which often represent such analogic relations as king - man + woman = queen, can be used to change a word's attribute, including its gender. For transferring king into queen in this analogy-based manner, we subtract a difference vector man - woman based on the knowledge that king is male. However, developing such knowledge is very costly for words and attributes. In this work, we propose a novel method for word attribute transfer based on reflection mappings without such an analogy operation. Experimental results show that our proposed method can transfer the word attributes of the given words without changing the words that do not have the target attributes. 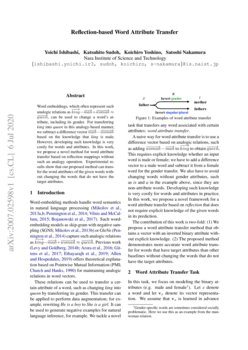 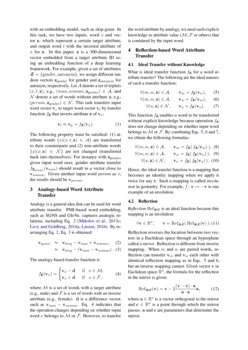 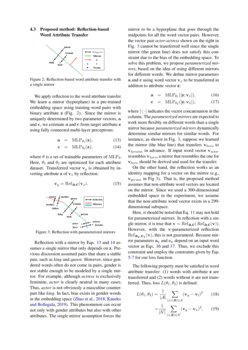 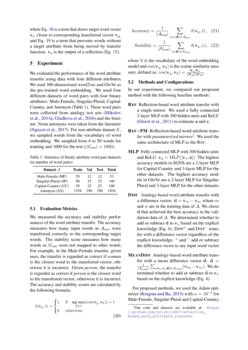 There have been some works that learn a lexicon together with the corpus...
Yuanzhi Ke, et al. ∙

In this work, we adhere to explore a Multi-Tasking learning (MTL) based ...
Tanmoy Mondal, et al. ∙

These relations can be used to transfer a certain attribute of a word, such as changing king into queen by transferring its gender. This transfer can be applied to perform data augmentation; for example, rewriting He is a boy to She is a girl. It can be used to generate negative examples for natural language inference, for example. We tackle a novel task that transfers any word associated with certain attributes: word attribute transfer.

A naive way for word attribute transfer is to use a difference vector based on analogic relations, such as adding −−−−−→woman−−−−→man to −−−→king to obtain −−−−→queen. This requires explicit knowledge whether an input word is male or female; we have to add a difference vector to a male word and subtract it from a female word for the gender transfer. We also have to avoid changing words without gender attributes, such as is and a in the example above, since they are non-attribute words. Developing such knowledge is very costly for words and attributes in practice. In this work, we propose a novel framework for a word attribute transfer based on reflection that does not require explicit knowledge of the given words in its prediction.

In this task, we focus on modeling the binary attributes (e.g. male and female111Gender-specific words are sometimes considered socially problematic. Here we use this as an example from the man-woman relation.). Let x denote a word and let \boldmathvx denote its vector representation. We assume that \boldmathvx is learned in advance with an embedding model, such as skip-gram. In this task, we have two inputs, word x and vector z, which represent a certain target attribute, and output word t with the inverted attribute of x for z. In this paper, z

is a 300-dimensional vector embedded from a target attribute ID using an embedding function of a deep learning framework. For example, given a set of attributes

The following property must be satisfied: (1) attribute words {x|(x,t,\boldmathz)∈A} are transferred to their counterparts and (2) non-attribute words {x|(x,\boldmathz)∈N} are not changed (transferred back into themselves). For instance with \boldmathzgender, given input word man, gender attribute transfer f\boldmathzgender(\boldmathv% man) should result in a vector close to \boldmathvwoman. Given another input word person as x, the results should be \boldmathvperson.

Analogy is a general idea that can be used for word attribute transfer. PMI-based word embedding, such as SGNS and GloVe, captures analogic relations, including Eq. 2 Mikolov et al. (2013c); Levy and Goldberg (2014a); Linzen (2016). By rearranging Eq. 2, Eq. 3 is obtained:

The analogy-based transfer function is

This function f\boldmathz enables a word to be transferred without explicit knowledge because operation f\boldmathz does not change depending on whether input word belongs to M or F. By combining Eqs. 5, 6 and 7, we obtain the following formulas:

Hence, the ideal transfer function is a mapping that becomes an identity mapping when we apply it twice for any v. Such a mapping is called involution in geometry. For example, f:\boldmathv↦−\boldmathv is one example of an involution.

Reflection Ref\boldmatha,\boldmathc is an ideal function because this mapping is an involution:

mirror. Reflection is different from inverse mapping. When m and w are paired words, reflection can transfer \boldmathvm and \boldmathvw each other with identical reflection mapping as in Eqs. 5 and 6, but an inverse mapping cannot. Given vector v in Euclidean space Rn, the formula for the reflection in the mirror is given:

where \boldmatha∈Rn is a vector orthogonal to the mirror and \boldmathc∈Rn is a point through which the mirror passes. a and c are parameters that determine the mirror.

We apply reflection to the word attribute transfer. We learn a mirror (hyperplane) in a pre-trained embedding space using training word pairs with binary attribute z (Fig. 2). Since the mirror is uniquely determined by two parameter vectors, a and c

a and c from target attribute z

where θ is a set of trainable parameters of MLPθ. Here, θ1 and θ2 are optimized for each attribute dataset. Transferred vector \boldmathvy is obtained by inverting attribute z of \boldmathvx by reflection:

Reflection with a mirror by Eqs. 13 and 14 assumes a single mirror that only depends on z. Previous discussion assumed pairs that share a stable pair, such as king and queen. However, since gendered words often do not come in pairs, gender is not stable enough to be modeled by a single mirror. For example, although actress is exclusively feminine, actor is clearly neutral in many cases. Thus, actor is not obviously a masculine counterpart like king. In fact, bias exists in gender words in the embedding space Zhao et al. (2018); Kaneko and Bollegala (2019). This phenomenon can occur not only with gender attributes but also with other attributes. The single mirror assumption forces the mirror to be a hyperplane that goes through the midpoints for all the word vector pairs. However, the vector pair actor-actress shown on the right in Fig. 3 cannot be transferred well since the single mirror (the green line) does not satisfy this constraint due to the bias of the embedding space. To solve this problem, we propose parameterized mirrors, based on the idea of using different mirrors for different words. We define mirror parameters a and c using word vector \boldmathvx to be transferred in addition to attribute vector z:

On the other hand, the reflection works as an identity mapping for a vector on the mirror (e.g., \boldmathvperson in Fig 3). That is, the proposed method assumes that non-attribute word vectors are located on the mirror. Since we used a 300-dimensional embedded space in the experiment, we assume that the non-attribute word vector exists in a 299-dimensional subspace.

Here, it should be noted that Eq. 11 may not hold for parameterized mirrors. In reflection with a single mirror, it is true that . However, with the v-parameterized reflection Ref\boldmathav,\boldmathcv% (\boldmathv), this is not guaranteed. Because mirror parameters av and cv depend on an input word vector as Eqs. 16 and 17. Thus, we exclude this constraint and employ the constraints given by Eqs. 5-7

for our loss function.

The following property must be satisfied in word attribute transfer: (1) words with attribute z are transferred and (2) words without it are not transferred. Thus, loss L(θ1,θ2) is defined:

We evaluated the performance of the word attribute transfer using data with four different attributes. We used 300-dimensional word2vec and GloVe as the pre-trained word embedding. We used four different datasets of word pairs with four binary attributes: Male-Female, Singular-Plural, Capital-Country, and Antonym (Table 1). These word pairs were collected from analogy test sets Mikolov et al. (2013a); Gladkova et al. (2016) and the Internet. Noun antonyms were taken from the literature Nguyen et al. (2017). For non-attribute dataset N, we sampled words from the vocabulary of word embedding. We sampled from 4 to 50 words for training and 1000 for the test (|Ntest|=1000).

where V is the vocabulary of the word embedding model and cos(\boldmathvy,\boldmathvk)

is the cosine similarity measure, defined as:

In our experiment, we compared our proposed method with the following baseline methods222Our code and datasets are available at: https://github.com/ahclab/reflection:

Reflection-based word attribute transfer with a single mirror. We used a fully connected 2-layer MLP with 300 hidden units and ReLU

Reflection-based word attribute transfer with parameterized mirrors. We used the same architecture of MLP as the Ref.

Analogy-based word attribute transfer with a mean difference vector ¯\boldmathd: ¯\boldmathd=1|Atrain|∑(mi,wi,\boldmathz)∈Atrain(\boldmathvmi−\boldmathvwi). We determined whether to add or subtract ¯\boldmathd to \boldmathvx based on the explicit knowledge (Eq. 4).

For proposed methods, we used the Adam optimizer Kingma and Ba (2015) with α=10−4 for Male-Female, Singular-Plural and Capital-Country, and α=15−3

Ioffe and Szegedy (2015) because they did not show any improvement in our pilot test. We implemented Ref, Ref+PM and MLP with Chainer Tokui et al. (2019), which is one of the best deep learning frameworks.

5.3 Evaluation in Accuracy and Stability

Table 2 shows the accuracy and stability results. Different pre-trained word embeddings GloVe or word2vec gave similar results. Ref+PM achieved the best accuracy among the methods that did not use explicit attribute knowledge. For example, the accuracy of Ref+PM was 76% in Capital-Country, but the accuracy of Diff+ was 26%. For stability, reflection-based transfers achieved outstanding stability scores that exceeded 99%. The results show that our proposed method transfers an input word if it has a target attribute and does not transfer an input word with better score than the baselines otherwise, even though the proposed method does not use attribute knowledge of the input words. MLP worked poorly both in accuracy and stability. On the antonym dataset, although the transfer accuracy by the proposed method was a bit lower than that by MLP, the proposed method’s stability was 100% and that of MLP was extremely poor: about 1%.

This research aims to transfer word binary attributes (e.g., gender) for applications such as data augmentation of a sentence. We can transfer the word attribute with analogy of word vectors, but it requires explicit knowledge whether the input word has the attribute or not (e.g., man ∈ gender, woman ∈ gender, person ∉ gender). The proposed method transfers binary word attributes using reflection-based mappings and keeps non-attribute words unchanged, without attribute knowledge in inference time. The experimental results showed that the proposed method outperforms analogy-based and MLP baselines in transfer accuracy for attribute words and stability for non-attribute words.