Conventional wisdom states that deep linear neural networks benefit from expressiveness and optimization advantages over a single linear layer. This paper suggests that, in practice, the training process of deep linear fully-connected networks using conventional optimizers is convex in the same manner as a single linear fully-connected layer. This paper aims to explain this claim and demonstrate it. Even though convolutional networks are not aligned with this description, this work aims to attain a new conceptual understanding of fully-connected linear networks that might shed light on the possible constraints of convolutional settings and non-linear architectures. 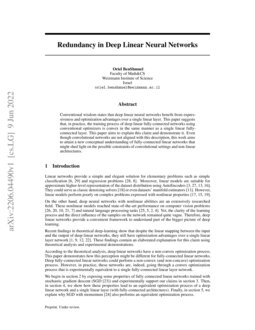 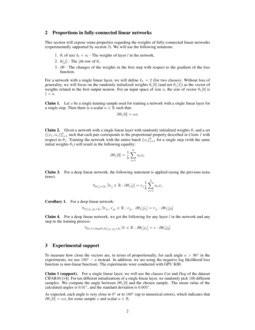 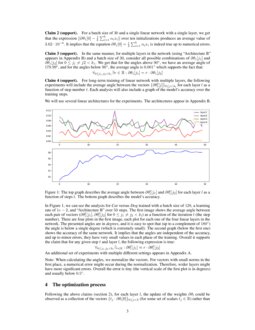 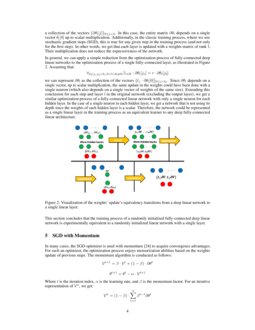 An Equivalence of Fully Connected Layer and Convolutional Layer

An exploration of parameter redundancy in deep networks with circulant projections

We study the interplay between memorization and generalization of overpa...
Chiyuan Zhang, et al. ∙

Why Are Convolutional Nets More Sample-Efficient than Fully-Connected Nets?

Linear networks provide a simple and elegant solution for elementary problems such as simple classification [6, 29] and regression problems [28, 8]

or even datasets’ manifold estimators

On the other hand, deep neural networks with nonlinear abilities are an extensively researched field. These nonlinear models reached state-of-the-art performance on computer vision problems

. Yet, the clarity of the learning process and the direct influence of the samples on the network remained quite vague. Therefore, deep linear networks provide a convenient framework to understand part of the bigger picture of deep learning.

Recent findings in theoretical deep-learning show that despite the linear mapping between the input and the output of deep linear networks, they still have optimization advantages over a single linear layer network [1, 9, 12, 22]. These findings contain an elaborated explanation for this claim using theoretical analysis and experimental demonstrations.

We begin in section 2

This section will expose some properties regarding the weights of fully-connected linear networks (experimentally supported by section 3). We will use the following notations:

For a network with a single linear layer, we will define k1=2 (for two classes). Without loss of generality, we will focus on the randomly initialized weights θ1[0] (and not θ1[1]

) as the vector of weights related to the first output neuron. For an input space of size

Let x be a single training sample used for training a network with a single linear layer for a single step. Then there is a scalar α∈R such that:

Given a network with a single linear layer with randomly initialized weights θ1 and a set {(xi,αi)}bi=1 such that each pair corresponds to the proportional property described in Claim 1 with respect to θ1. Training the network with the entire batch {xi}bi=1 for a single step (with the same initial weights θ1) will result in the following equality:

For a deep linear network, the following statement is applied (using the previous notations):

For a deep linear network:

For a deep linear network, we get the following for any layer l in the network and any step in the training process:

To measure how close the vectors are, in terms of proportionally, for each angle a>90∘ in the experiments, we use 180∘−a instead. In addition, we are using the negative log likelihood loss function (a non-linear function). The experiments were conducted with GPU K80.

, and the standard deviation is

As expected, each angle is very close to 0∘ or to 180∘ (up to numerical errors), which indicates that ∂θ1[0]=αx, for some sample x and scalar α∈R.

For a batch size of 30 and a single linear network with a single layer, we get that the expression ||∂θ1[0]−1b∑bi=1αixi|| over ten initializations produces an average value of 3.62⋅10−8. It implies that the equation ∂θ1[0]=1b∑bi=1αixi is indeed true up to numerical errors.

In the same manner, for multiple layers in the network (using “Architecture B” appears in Appendix B) and a batch size of 30, consider all possible combinations of ∂θ1[j1] and ∂θ1[j2] for 0≤j1≠j2<k1. We get that for the angles above 90∘, we have an average angle of 179.99∘, and for the angles below 90∘, the average angle is 0.001∘ which supports the fact that:

For long-term training of linear network with multiple layers, the following experiments will include the average angle between the vectors {∂θtl[j]}0≤j<kl for each layer l as a function of step number t. Each analysis will also include a graph of the model’s accuracy over the training steps.

In Figure 1, we can see the analysis for Cat versus Dog trained with a batch size of 128, a learning rate of 1e−2, and “Architecture B” over 50 steps. The first image shows the average angle between each pair of vectors (∂θtl[j1],∂θtl[j2] for 0≤j1≠j2<kl) as a function of the iteration t (the step number). There are four plots in the first image, each plot for each one of the four linear layers in the network. The presented angles are in degrees, and it is easy to spot that (up to a complement of 180∘) the angle is below a single degree (which is extremely small). The second graph (below the first one) shows the accuracy of the same network. It implies that the angles are independent of the accuracy, and up to minor errors, they have very small values in each phase of the training. Overall it supports the claim that for any given step t and layer l, the following expression is true:

An additional set of experiments with multiple different settings appears in Appendix A.

Note: When calculating the angles, we normalize the vectors. For vectors with small norms in the first place, a numerical error might occur during the normalization. Therefore, wider layers might have more significant errors. Overall the error is tiny (the vertical scale of the first plot is in degrees) and usually below 0.5∘.

Following the above claims (section 2), for each layer l, the update of the weights ∂θl could be observed as a collection of the vectors {tj⋅∂θl[0]}0≤j<k (for some set of scalars tj∈R) rather than a collection of the vectors {∂θl[j]}0≤j<k. In this case, the entire matrix ∂θl depends on a single vector θl[0] up to scalar multiplication. Additionally, in the classic training process, where we use stochastic gradient steps (SGD), this is true for any given step in the training process (and not only for the first step). In other words, we get that each layer is updated with a weights matrix of rank 1. Their multiplication does not reduce the expressiveness of the network.

we can represent ∂θl as the collection of the vectors {tj⋅∂θl[0]}0≤j<kl. Since ∂θl depends on a single vector, up to scalar multiplication, the same update in the weights could have been done with a single neuron (which also depends on a single vector of weights of the same size). Extending this conclusion for each step and layer l in the original network (excluding the output layer), we get a similar optimization process of a fully-connected linear network with only a single neuron for each hidden layer. In the case of a single neuron in each hidden layer, we get a network that is not using its depth since the weights of each hidden layer is a scalar. Therefore, the network could be represented as a single linear layer in the training process as an equivalent learner to any deep fully-connected linear architecture.

In many cases, the SGD optimizer is used with momentum [24] to acquire convergence advantages. For such an optimizer, the optimization process enjoys memorization abilities based on the weights update of previous steps. The momentum algorithm is conducted as follows:

Where t is the iteration index, α is the learning rate, and β is the momentum factor. For an iterative representation of Vn, we get:

Assume a new optimization method with a predefined number of steps (in our case, n steps), using the traditional SGD with a gentle twist:

In the new variant, θt is an iteration-dependent scalar. Proportional vectors would be proportional even after scalar multiplications. Therefore, the properties mentioned in section 2 and supported by section 3 are applied to the new variant of SGD defined above. Moreover, we get the following equality:

The above equality shows that taking n steps using SGD with momentum produces the same state as the proposed optimization method. Additionally, both methods (SGD with momentum and the new method defined above) use the same matrices θini=1 to reach that state (up to scalar multiplications). It implies similar expressive abilities, and therefore both processes are equivalent in that term.

Our experiments are valid solely for fully-connected networks. Intuitively, the proportion between two vectors of weights is due to the mutual input layer observations during the training. Even though convolutional layers observe local regions individually (rather than the entire input simultaneously), there are still dependencies between close areas in the image and different filters concerning the same region. Therefore, deep linear convolutional neural networks probably do not have a convex optimization process; however, these models still might demonstrate interesting optimization constraints. Testing this hypothesis in future work might equip us with more knowledge regarding linear networks in particular and convolutional behavior in general.

In Figures 3,4,5,6,7, we can see the graph analysis of various cases with various learning rates, batch sizes, architectures (see Appendix B), categories (of CIFAR10), and training resolutions.