Recently, object detection in aerial images has gained much attention in computer vision. Different from objects in natural images, aerial objects are often distributed with arbitrary orientation. Therefore, the detector requires more parameters to encode the orientation information, which are often highly redundant and inefficient. Moreover, as ordinary CNNs do not explicitly model the orientation variation, large amounts of rotation augmented data is needed to train an accurate object detector. In this paper, we propose a Rotation-equivariant Detector (ReDet) to address these issues, which explicitly encodes rotation equivariance and rotation invariance. More precisely, we incorporate rotation-equivariant networks into the detector to extract rotation-equivariant features, which can accurately predict the orientation and lead to a huge reduction of model size. Based on the rotation-equivariant features, we also present Rotation-invariant RoI Align (RiRoI Align), which adaptively extracts rotation-invariant features from equivariant features according to the orientation of RoI. Extensive experiments on several challenging aerial image datasets DOTA-v1.0, DOTA-v1.5 and HRSC2016, show that our method can achieve state-of-the-art performance on the task of aerial object detection. Compared with previous best results, our ReDet gains 1.2, 3.5 and 2.6 mAP on DOTA-v1.0, DOTA-v1.5 and HRSC2016 respectively while reducing the number of parameters by 60% (313 Mb vs. 121 Mb). The code is available at: <https://github.com/csuhan/ReDet>. 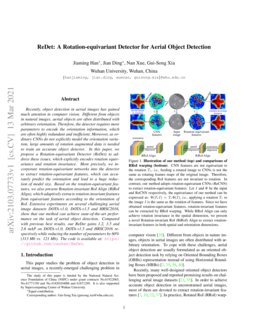 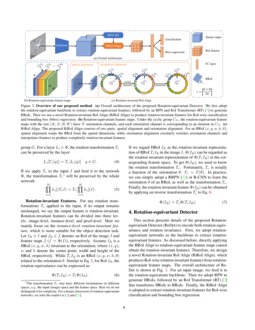 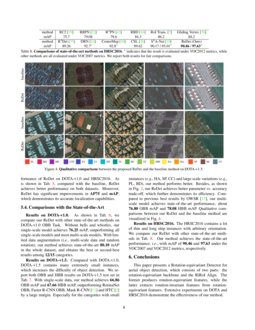 We classify the discontinuity of loss in both five-param and eight-param...
Wen Qian, et al. ∙

Recently, many well-designed oriented object detectors have been proposed and reported promising results on challenging aerial image datasets [liu2017hrsc2016, xia2018dota]. In order to achieve accurate object detection in unconstrained aerial images, most of them are devoted to extract rotation-invariant features [ma2018arbitrary, ding2018transformer, yang2019r3det, han2020align]. In practice, Rotated RoI (RRoI) warping (e.g., RRoI Pooling [ma2018arbitrary] and RRoI Align [ding2018transformer]) is the most commonly used method to extract rotation-invariant features, which can warp region features precisely according to the bounding boxes of RRoI in the 2D planar. However, RRoI warping with regular CNN features can not produce exactly rotation-invariant features. The rotation invariance is approximated by employing larger capacity networks and more training samples to model the rotation variation. As shown in Fig. 1, the regular CNNs are not equivariant to the rotation, i.e., feeding a rotated image to CNNs is not the same as rotating feature maps of the original image. Therefore, region features warped from regular CNN feature maps are usually unstable and delicate as the orientation changes.

Some recently proposed methods [cohen2016gcnn, hoogeboom2018hexaconv, weiler2018learning] extend CNNs to larger groups and achieve rotation equivariance111Equivariance is a property that applying transformations to the input produces transformations of the feature in a predictable way. with group convolutions [cohen2016gcnn]. Feature maps of these methods have additional orientation channels recording features from different orientations. However, directly applying the ordinary RRoI warping to rotation-equivariant features is unable to produce rotation-invariant features, as it can only warp region features in the 2D planar, i.e., the spatial dimension, while the orientation channels are still misaligned. To extract completely rotation-invariant features, we also need to adjust the orientation dimension of feature maps according to the orientation of RRoI.

Extensive experiments performed on the challenging aerial image datasets DOTA [xia2018dota] and HRSC2016 [liu2017hrsc2016] demonstrate the effectiveness of our method. We summary our contributions as: (1) We propose a Rotation-equivariant Detector for high-quality aerial object detection, which encodes both rotation equivariance and rotation invariance. To our best knowledge, it is the first time that rotation equivariance has been systematically introduced into oriented object detection. (2) We design a novel RiRoI Align to extract rotation-invariant features from rotation-equivariant features. Different from other RRoI warping methods, RiRoI Align produces completely rotation-invariant features in both spatial and orientation dimensions. (3) Our method achieves the state-of-the-art 80.10, 76.80 and 90.46 mAP on DOTA-v1.0, DOTA-v1.5 and HRSC2016, respectively. Compared with previous best results, our method gains 1.2, 3.5 and 2.6 mAP improvements. Compared with the baseline, our method shows consistent and substantial improvements and reduces the number of parameters by 60% (313 Mb vs. 121 Mb). Moreover, our method achieves better model size vs. accuracy trade-off (shown in Fig. 2).

[yang2020arbitrary] regards angular prediction as a classification task to avoid discontinuous boundaries problem. Recently, some CenterNet [zhou2019objects]-based methods [pan2020dynamic, wei2020oriented, yi2020bbavector] show their advantages in detecting small objects. The above methods are devoted to improving object representations or feature representations. While our method is dedicated to improving the feature representation throughout the network: from the backbone to the detection head. Specifically, our method produces rotation-equivariant features in the backbone, significantly reducing the complexity in modeling orientation variations. In the detection head, the RiRoI Align extracts completely rotation-invariant features for robust object localization.

where Tg indicates a group action in the corresponding space. Especially when TYg is identical for all TXg, equivariance becomes invariance.

where ψ:Z2→RK indicates the convolution filter and ∗ is the convolution operation. Recently proposed methods [cohen2016gcnn, hoogeboom2018hexaconv, weiler2018learning] extend CNNs to large groups, achieving both translation and rotation equivariance. Let H denotes a rotation group, e.g., the cyclic group CN containing discrete rotations by angles multiple of 2πN. We can define the group G as the semidirect product of the translation group (R2,+) and the rotation group H, i.e., G≅(R2,+)⋊H. By replacing x∈(R2,+) with g∈G in Eq. 2, the rotation-equivariant convolution can be defined as:

If we apply Tr to the input I and feed it to the network Φ, the transformation Tr222The transformation Tr may have different formulations in different spaces, e.g., the input (image) space and the feature space. Here we do not distinguish it for simplicity. For a deeper discussion of rotation-equivariant networks, we refer the readers to [cohen2016gcnn] and [weiler2018learning]. will be preserved by the whole network:

Rotation-invariant Features. For any rotation transformations Tr applied to the input, if its output remains unchanged, we say the output feature is rotation-invariant. Rotation-invariant features can be divided into three levels: image-level, instance-level, and pixel-level. Here we mainly focus on the instance-level rotation-invariant feature, which is more suitable for the object detection task. Let IR∈I and fR∈f denotes an RoI of the image I and feature maps f (f=Φ(I)), respectively. Assume IR is a HRoI (x,y,w,h) invariant to the orientation, where (x,y), w and h denote the center point, width and height of the HRoI, respectively. While TrIR is an RRoI (x,y,w,h,θ) related to the orientation θ. Similar to Eq. 5, for RoI IR, the rotation equivariance can be expressed as:

where α=θN/2π−r indicates the distance factor for 1D-interpolation. Note that we use the mod function to ensure i∈[1,N] (as well as i+1).

Following the settings in previous methods [ding2018transformer, han2020align], we use both training and validation sets for training and the test set for testing. We crop the original images into 1024×1024

patches with a stride of 824. Random horizontal flipping is adopted to avoid over-fitting during training, and no other tricks are utilized. For fair comparisons with other methods, we prepare multi-scale data at three scales {0.5, 1.0, 1.5}, and random rotation for training and testing.

HRSC2016 [liu2017hrsc2016] is a challenging ship detection dataset with OBB annotations, which contains 1061 aerial images with the size ranges from 300×300 to 1500×900. It includes 436, 181 and 444 images in the training, validation and test set, respectively. We use both training and validation sets for training and the test set for testing. All images are resized to (800, 512) without changing the aspect ratio. Random horizontal flipping is applied during training.

, we directly use the ImageNet pretrained models from Pytorch

Fine-tuning on detection. We adopt ResNet [he2016resnet] with FPN [lin2017feature] as the backbone of the baseline method. ReResNet with ReFPN is adopted as the backbone of our proposed ReDet. For RPN, we set 15 anchors per location of each pyramid level. For R-CNN, we sample 512 RoIs with a 1:3 positive to negative ratio for training. For testing, we adopt 10000 RoIs (2000 for each pyramid level) before NMS and 2000 RoIs after NMS. We adopt the same training schedules as mmdetection [chen2019mmdetection]. SGD optimizer is adopted with an initial learning rate of 0.01, and the learning rate is divided by 10 at each decay step. The momentum and weight decay are 0.9 and 0.0001, respectively. We train all models in 12 epochs for DOTA and 36 epochs for HRSC2016. We use 4 V100 GPUs with a total batch size of 8 for training and a single V100 GPU for inference.

In this section, we conduct a series of ablation experiments on DOTA-v1.5 test set to evaluate the effectiveness of our proposed method. Note that we use the original ResNet+FPN and RRoI Align as the backbone and RoI warping method for the baseline method, respectively.

Performance on other datasets. To prove the generalization of our proposed method, we also evaluate the performance of ReDet on DOTA-v1.0 and HRSC2016. As is shown in Tab. 5, compared with the baseline, ReDet achieves better performance on both datasets. Moreover, ReDet has significant improvements in AP75 and mAP, which demonstrates its accurate localization capabilities.

5.4 Comparisons with the State-of-the-Art

Results on DOTA-v1.0. As shown in Tab. 6, we compare our ReDet with other state-of-the-art methods on DOTA-v1.0 OBB Task. Without bells and whistles, our single-scale model achieves 76.25 mAP, outperforming all single-scale models and most multi-scale models. With limited data augmentation (i.e., multi-scale data and random rotation), our method achieves state-of-the-art 80.10 mAP in the whole dataset, and obtains the best or second-best results among 12/15 categories.

Results on DOTA-v1.5. Compared with DOTA-v1.0, DOTA-v1.5 contains many extremely small instances, which increases the difficulty of object detection. We report both OBB and HBB results on DOTA-v1.5 test set in Tab. 7. With single-scale data, our method achieves 66.86 OBB mAP and 67.66 HBB mAP, outperforming RetinaNet OBB, Faster R-CNN OBB, Mask R-CNN [he2017maskrcnn] and HTC [chen2019hybrid] by a large margin. Especially for the categories with small instances (e.g., HA, SP, CC) and large scale variations (e.g., PL, BD), our method performs better. Besides, as shown in Fig. 2, our ReDet achieves better parameter vs. accuracy trade-off, which further demonstrates its efficiency. Compared to previous best results by OWSR [li2019oswr], our multi-scale model achieves state-of-the-art performance, about 76.80 OBB mAP and 78.08 HBB mAP. Qualitative comparisons between our ReDet and the baseline method are visualized in Fig. 4.

Results on HRSC2016. The HRSC2016 contains a lot of thin and long ship instances with arbitrary orientation. We compare our ReDet with other state-of-the-art methods in Tab. 8. Our method achieves the state-of-the-art performance, , with mAP of 90.46 and 97.63 under the VOC2007 and VOC2012 metrics, respectively.