Due to data dependency and model leakage properties, Deep Neural Networks (DNNs) exhibit several security vulnerabilities. Several security attacks exploited them but most of them require the output probability vector. These attacks can be mitigated by concealing the output probability vector. To address this limitation, decision-based attacks have been proposed which can estimate the model but they require several thousand queries to generate a single untargeted attack image. However, in real-time attacks, resources and attack time are very crucial parameters. Therefore, in resource-constrained systems, e.g., autonomous vehicles where an untargeted attack can have a catastrophic effect, these attacks may not work efficiently. To address this limitation, we propose a resource efficient decision-based methodology which generates the imperceptible attack, i.e., the RED-Attack, for a given black-box model. The proposed methodology follows two main steps to generate the imperceptible attack, i.e., classification boundary estimation and adversarial noise optimization. Firstly, we propose a half-interval search-based algorithm for estimating a sample on the classification boundary using a target image and a randomly selected image from another class. Secondly, we propose an optimization algorithm which first, introduces a small perturbation in some randomly selected pixels of the estimated sample. Then to ensure imperceptibility, it optimizes the distance between the perturbed and target samples. For illustration, we evaluate it for CFAR-10 and German Traffic Sign Recognition (GTSR) using state-of-the-art networks. 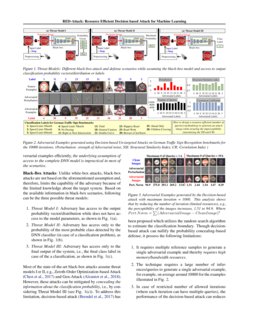 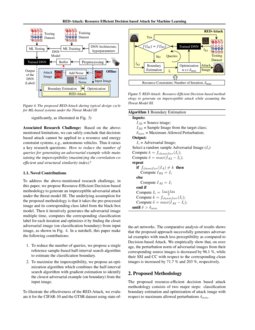 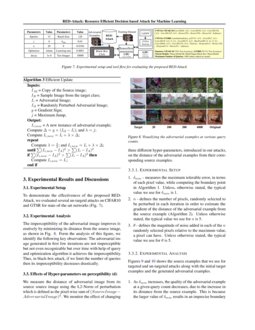 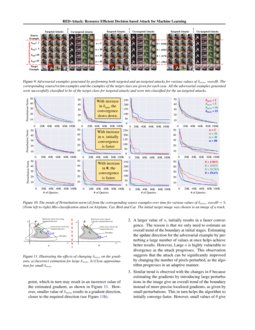 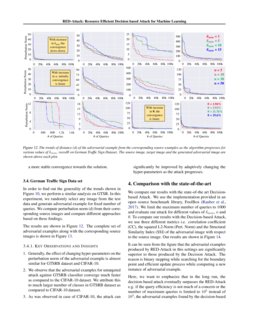 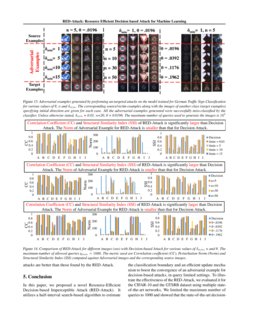 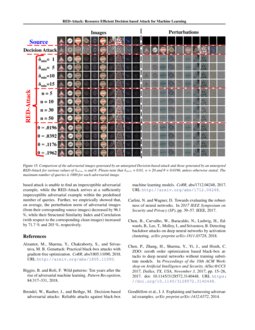 Deep Neural Networks (DNNs) have revolutionized the computing paradigms but due to their inherent security vulnerabilities, i.e., training or inference data poisoning (Khalid et al., 2018), backdoors (Biggio & Roli, 2018; Gu et al., 2017), Trojans (Li et al., 2018; Zou et al., 2018; Chen et al., 2018), etc., they can lead to catastrophic effects in safety-critical applications, e.g., in autonomous driving (Stilgoe, 2018). Several security attacks have been proposed that exploit these security vulnerabilities, however, the adversarial attacks have emerged as one of the most common and successful class of security attacks against DNNs and can be defined as the carefully-crafted imperceptible data corruptions to fool DNNs for misclassification (Goodfellow et al., 2014). The implementation and effectiveness of these attacks depend upon the underlying assumption for attacker’s access to the DNNs, i.e., white-box and black-box scenarios.

Black-Box Attacks: Unlike white-box attacks, black-box attacks are not based on the aforementioned assumption and, therefore, limits the capability of the adversary because of the limited knowledge about the target system. Based on the available information in black-box scenarios, following can be the three possible threat models:

Most of the state-of-the-art black-box attacks assume threat models I or II, e.g., Zeroth-Order Optimization-based Attack (Chen et al., 2017) and Gen-Attack (Alzantot et al., 2018). However, these attacks can be mitigated by concealing the information about the classification probability, i.e., by considering Threat Model III (see Fig. 1(c)). To address this limitation, decision-based attack (Brendel et al., 2017) has been proposed which utilizes the random search algorithm to estimate the classification boundary. Though decision-based attack can nullify the probability concealing-based defense, it possess the following limitations:

Associated Research Challenge: Based on the above-mentioned limitations, we can safely conclude that decision-based attack cannot be applied to a resource and energy constraint systems, e.g., autonomous vehicles. Thus it raises a key research questions: How to reduce the number of queries for generating an adversarial example while maintaining the imperceptibility (maximizing the correlation coefficient and structural similarity index)?

To address the above-mentioned research challenge, in this paper, we propose Resource-Efficient Decision-based methodology to generate an imperceptible adversarial attack under the threat model III. The underlying assumption for the proposed methodology is that it takes the pre-processed image and its corresponding class label from the black-box model. Then it iteratively generates the adversarial image multiple time, computes the corresponding classification label for each iteration and optimizes it by finding the closet adversarial image (on classification boundary) from input image, as shown in Fig. 4. In a nutshell, this paper make the following contributions:

To illustrate the effectiveness of the RED-Attack, we evaluate it for the CIFAR-10 and the GTSR dataset using state-of-the-art networks. The comparative analysis of results shows that the proposed approach successfully generates adversarial examples with much less perceptibility as compared to Decision-based Attack. We empirically show that, on average, the perturbation norm of adversarial images from their corresponding source images is decreased by 96.1 %, while their SSI and CC with respect to the corresponding clean images is increased by 71.7 % and 203 %, respectively.

The first step is to estimate the boundary for which we propose a half-interval search based algorithm that requires a target image and a reference image from any other class, as shown in Algorithm 1 (See Step 1 of the Fig. 6).

Let IA2, IB2 and δmin be the source image (class: A), reference image (class: other than A) and maximum allowed estimation error. The goal of this algorithm is to find a sample which has tolerable distance (less than δmin) from the classification boundary and has label different from that of the source image, mathematically it can be defined as:

To generate the appropriate Ii, the proposed algorithm perform the half-interval search using the source image (IA2) and the reference image (IB2). It first finds the half way point Ii between IA2 and IB2 by computing the average of the two and then replaces IA2 or IB2 with Ii depending upon the class in which Ii falls. For examples, if the label of the half way point Ii is class A then algorithm replaces IA2 with Ii and if its label is not A then the algorithm replaces IB2 with Ii. The algorithm repeats this process until the maximum distance of Ii from the IA2 is less than δmin and while ensuring the f(Ii) ≠f(IA2). The proposed boundary estimation can be used for targeted attack if we choose the reference image from the target class.

The second step of the proposed methodology is to optimize noise on the sample Ii (output of the boundary estimation). We propose to incorporate the adaptive update in the zeroth-order stochastic algorithm to efficiently optimize it.

Let IA2, IB2, δmin and Ii be the source image (class: A), reference image (class: other than A), maximum allowed estimation error and perturbed image, respectively. The goal of this algorithm is to minimize distance of Ii from IA2 while ensuring that it has label different than the source image, mathematically it can be defined as:

To achieve this goal, we first identify the sign of the gradient for estimating the boundary behavior (minima). For example, if the sign is positive then we continue moving in the same direction; otherwise we switch the direction, as shown in Algorithm 2. Once the direction is identified, the next key challenge is to select the appropriate hop size. Therefore, to address this challenge, we propose an algorithm (Algorithm 3) which introduces adaptive hop size by applying the half-interval update. For example, for updating, it starts with maximum hop size and then it reduces it by half. The algorithm repeats itself until it finds the local minima, illustrated by Step 3-5 of Fig. 11.

To demonstrate the effectiveness of the proposed RED-Attack, we evaluated several un-targetd attacks on CIFAR10 and GTSR for state-of-the-art networks (Fig. 7).

3.3 Effects of Hyper-parameters on perceptibility (d)

We measure the distance of adversarial image from its source source image using the L2-Norm of perturbation which is defined as the pixel-wise sum of (SourceImage−AdversarialImage)2. We monitor the effect of changing three different hyper-parameters, introduced in our attacks, on the distance of the adversarial examples from their corresponding source examples.

Figures 9 and 10 shows the source examples that we use for targeted and un-targeted attacks along with the initial target examples and the generated adversarial examples.

In order to find out the generality of the trends shown in Figure 10, we perform a similar analysis on GTSR. In this experiment, we randomly select any image from the test data and generate adversarial example for fixed number of queries. We compute perturbation norm (d) from their corresponding source images and compare different approaches based on these findings.

4 Comparison with the state-of-the-art

We compare our results with the state-of-the art Decision-based Attack. We use the implementation provided in an open source benchmark library, FoolBox (Rauber et al., 2017). We limit the maximum number of queries to 1000 and evaluate our attack for different values of δmin, n and θ. To compare our results with the Decision-based Attack, we use three different metrics i.e. correlation coefficient (CC), the squared L2-Norm (Pert. Norm) and the Structural Similarity Index (SSI) of the adversarial image with respect to the source image. Our results are shown in Figure 14.

It can be seen from the figure that the adversarial examples produced by RED-Attack in this settings are significantly superior to those produced by the Decision Attack. The reason is binary stepping while searching for the boundary point and efficient update process while computing a new instance of adversarial example.

In this paper, we proposed a novel Resource-Efficient Decision-based Imperceptible Attack (RED-Attack). It utilizes a half-interval search-based algorithm to estimate the classification boundary and an efficient update mechanism to boost the convergence of an adversarial example for decision-based attacks, in query limited settings. To illustrate the effectiveness of the RED-Attack, we evaluated it for the CIFAR-10 and the GTSRB dataset using multiple state-of-the-art networks. We limited the maximum number of queries to 1000 and showed that the state-of-the-art decision-based attack is unable to find an imperceptible adversarial example, while the RED-Attack arrives at a sufficiently imperceptible adversarial example within the predefined number of queries. Further, we empirically showed that, on average, the perturbation norm of adversarial images (from their corresponding source images) decreased by 96.1 %, while their Structural Similarity Index and Correlation (with respect to the corresponding clean images) increased by 71.7 % and 203 %, respectively.