Records for Some Stationary Dependence Sequences 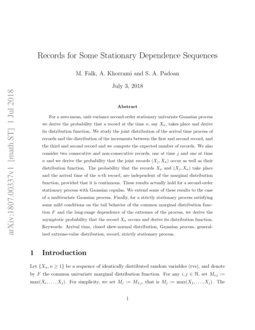 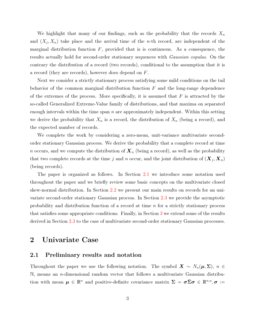 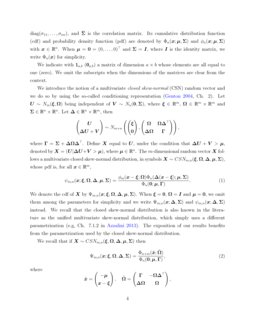 be a sequence of identically distributed random variables (rvs), and denote by

F the common univariate marginal distribution function. For any i,j∈N, set Mi:j:=max(Xi,…,Xj). For simplicity, we set Mj:=M1:j, that is Mj:=max(X1,…,Xj). The rv Xn is a record if Xn>Mn−1. Such an event is coded by the indicator function Rn:=1(Xn is a record). When X1,X2,… are independent, many results on records are already known (e.g., gal87; arnbn98; [Ch. 4]resn08; barakat2017; falkkp2018). In the multivariate case various definitions of records are possible and have been investigated both in the past and more recently, see e.g., golres89, hashhue05, hwang2010, domfalzot18 to name a few. In this work we consider complete records

; these are random vectors which are univariate records in each component. Precisely, let

{Xn,n≥1} be a strictly stationary sequence of d-dimensional random vectors (rvs) Xn=(X(1)n,…,X(d)n)∈Rd. Let F be the common joint distribution function of Xn with margins Fi, 1≤i≤d. The rv Xn is a complete record if

At first we consider a univariate second-order stationary Gaussian process with zero-mean, unit-variance. This means that for every n=1,2,…, E(Xn)=0, E2(Xn)=1 and the autocovariance of the process is translation-invariant depending only on the time difference, i.e. for every i,j, ρi,j=E(XiXj)=E(X0Xj−i)=ρ0,j−i≡ρj−i, where ρj−i is a function only of the separation j−i and for every m, ρi+m,j+m=ρj−i. We derive the probability that a record at time n, say Xn, takes place, and the distribution of Xn, being a record. Furthermore, we derive the joint distribution of the arrival time process of records and more specifically the distribution of the increments between the first and second record and the third and second record. We compute the expected number of records which, depending on the type of correlation structure of the Gaussian process, can be finite or infinite. We also focus on joint records and we derive the probability that two consecutive and non-consecutive records at the time j and n, say Xj and Xn, take place, as well as the joint distribution of (Xj,Xn), considering they are both records.

We highlight that many of our findings, such as the probability that the records Xn and (Xj,Xn) take place and the arrival time of the n-th record, are independent of the marginal distribution function F, provided that is is continuous. As a consequence, the results actually hold for second-order stationary sequences with Gaussian copulas. On the contrary the distribution of a record (two records), conditional to the assumption that it is a record (they are records), however does depend on F.

Next we consider a strictly stationary process satisfying some mild conditions on the tail behavior of the common marginal distribution function F and the long-range dependence of the extremes of the process. More specifically, it is assumed that F is attracted by the so-called Generalized Extreme-Value family of distributions, and that maxima on separated enough intervals within the time span n are approximately independent. Within this setting we derive the probability that Xn is a record, the distribution of Xn (being a record), and the expected number of records.

The paper is organized as follows. In Section 2.1 we introduce some notation used throughout the paper and we briefly review some basic concepts on the multivariate closed skew-normal distribution. In Section 2.2 we present our main results on records for an univariate second-order stationary Gaussian process. In Section 2.3 we provide the asymptotic probability and distribution function of a record at time n for a strictly stationary process that satisfies some appropriate conditions. Finally, in Section 3 we extend some of the results derived in Section 2.3 to the case of multivariate second-order stationary Gaussian processes.

Throughout the paper we use the following notation. The symbol X∼Nn(μ,Σ), n∈N, means an n

is the correlation matrix. Its cumulative distribution function (cdf) and probability density function (pdf) are denoted by

is the identity matrix, we write

We indicate with 1a,b (0a,b) a matrix of dimension a×b whose elements are all equal to one (zero). We omit the subscripts when the dimensions of the matrices are clear from the context.

We introduce the notion of a multivariate closed skew-normal (CSN) random vector and we do so by using the so-called conditioning representation ([Ch. 2]genton2004). Let U∼Nm(ξ,Ω) being independent of V∼Nn(0,Σ), where ξ∈Rm, Ω∈Rm×Rm and Σ∈Rn×Rn. Let Δ∈Rn×Rm, then

where Γ=Σ+ΔΩΔ⊤. Define X equal to U, under the condition that ΔU+V>μ, denoted by X=(U|ΔU+V>μ), where μ∈Rn. The m-dimensional random vector X follows a multivariate closed skew-normal distribution, in symbols X∼CSNm,n(ξ,Ω,Δ,μ,Σ), whose pdf is, for all x∈Rm,

Let {Xn,n≥1} be a second-order stationary Gaussian sequence of dependent rvs. Without loss of generality, assume for simplicity that E(Xi)=0, E(X2i)=1 for every 1≤i≤n. Throughout the paper we will refer to such a process as a stationary standard Gaussian (SSG) sequence. For any n∈N, let I⊂{1,…,n} and I∁={1,…,n}∖I identify the |I|-dimensional and |I∁|-dimensional subvector partition such that X=(X1,…,Xn)⊤=(X⊤I,X⊤I∁)⊤, with corresponding partition of the parameter ¯Σ. By |A| we denote the number of elements of a set A.

Furthermore, we denote the related correlation matrix by

In our first result we compute the probability that Xn is a record together with its distribution. It is well known that Pr(Rn=1)=1/n in the case of independent rv with identical continuous df (see e.g., gal87) and that the distribution of Xn, given that it is a record, equals that of the largest observation among X1,…,Xn falkkp2018.

The probability that Xn is a record is

be the arrival time of the k-th record.

where B is given in (12). By standardizing the random vector XI∁, we obtain

By recalling formula (4), we obtain

In the next result we establish the distribution of the arrival time T(2) of the second record as well as that of the increment XT(2)−X1.

Therefore, (13) follows by similar arguments to those used in Proposition 3.1. It must be checked that

For Pn we derive the following upper bound Bn. Precisely,