We introduce ReConvNet, a recurrent convolutional architecture for semi-supervised video object segmentation that is able to fast adapt its features to focus on the object of interest at inference time. Generalizing to new objects not observed during training is known to be an hard task for supervised approaches that need to be retrained on the new instances. To tackle this problem, we propose a more efficient solution that learns spatio-temporal features that can be adapted by the model itself through affine transformations conditioned on the object in the first frame of the sequence. This approach is simple, it can be trained end-to-end and does not require extra training steps at inference time. Our method shows comparable results on DAVIS2016 with respect to state-of-the art approaches that use online finetuning, and outperform them on DAVIS2017. ReConvNet shows also promising results on the DAVIS-Challenge 2018 placing in 10-th position. 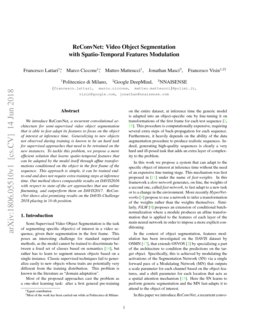 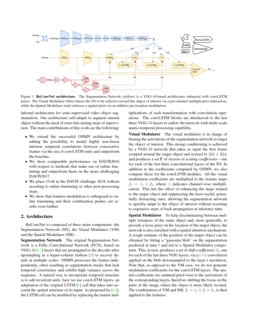 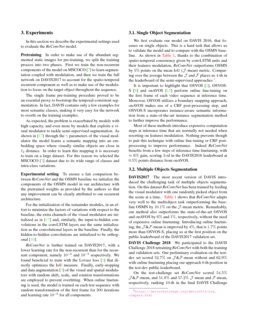 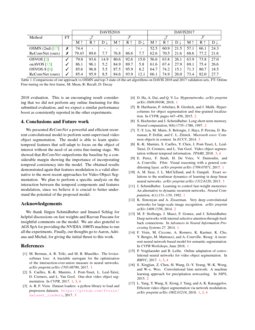 Semi-Supervised Video Object Segmentation is the task of segmenting specific objects of interest in a video sequence, given their segmentation in the first frame. This poses an interesting challenge for standard supervised methods, as the model cannot be trained to discriminate between a fixed set of classes based on semantics [13], but rather has to learn to segment unseen objects based on a single instance. Classic supervised techniques fail to generalize easily to new objects whose traits are potentially very different from the training data. This problem is known in the literature as “domain adaptation”.

Most of the proposed approaches cast the problem as a one-shot learning task: after a first general pre-training on the entire dataset, at inference time the generic model is adapted into an object-specific one by fine-tuning on transformations of the first frame for each test sequence [2, 15]. This procedure is computationally expensive, requiring several extra steps of back-propagation for each sequence. Furthermore, it heavily depends on the ability of the data augmentation procedure to produce realistic sequences. Indeed, generating high-quality sequences is clearly a very hard and ill-posed task that adds an extra layer of complexity to the problem.

In this work we propose a system that can adapt to the specific object of interest at inference time without the need of an expensive fine-tuning stage. This mechanism is inspired by fast-weights [10]. In this framework a slow network generates, on-line, the weights of a second one, called fast network, to fast adapt to a new task or to a change in the environment. More recently HyperNetworks [3] propose to use a network to infer a transformation of the weights rather than the weights themselves. Similarly, FiLM [8]

proposes an extension of conditional batch-normalization where a module produces an affine transformation that is applied to the features of each layer of the main neural network in order to impose a more explicit conditioning.

In the context of object segmentation, features modulation has been investigated on the DAVIS dataset by OSMN [17], that extends OSVOS [2] by specializing a part of the architecture to condition the predictions on the target object. Specifically, this is achieved by modulating the activations of the Segmentation Network (SN) via a single forward pass of a Modulating Network (MN) that outputs a scale parameter for each channel based on the object features, and a shift parameter for each location that acts as a spatial attention mechanism similar to [12]. Here the SN learns to perform generic segmentation and the MN fast-adapts it to attend to the object of interest.

In this paper we introduce ReConvNet, a recurrent convolutional architecture for semi-supervised video object segmentation. Our architecture self-adapts to segment unseen object without the need of extra fine-tuning steps of supervision. The main contributions of this work are the following:

ReConvNet is composed of three main components: the Segmentation Network (SN), the Visual Modulator (VM) and the Spatial Modulator (SM).

The original OSMN Segmentation Network is a Fully Convolutional Network (FCN), based on VGG-16 [11] layers that are propagated to the decoder after upsampling in a hyper-column fashion [4]

A natural way to incorporate temporal structure into the model is to add recurrent units. Here we use convLSTM layers, an adaptation of the original LSTM [5] cell that takes into account the spatial structure of its input. As proposed by [16], the LSTM cell can be modified by replacing the matrix multiplications of each transformation with convolution operations. The convLSTM blocks are interleaved to the last three VGG-16 layers to endow the network with multi-scale spatio-temporal processing capability.

The visual modulator is in charge of biasing the activations of the segmentation network to target the object of interest. This strong conditioning is achieved by a VGG-16 network that takes as input the first frame cropped around the target object and resized to 224×224, and produces a set Γ

scaling coefficients – one for each of the last three convolutional layers of the SN. In addition to the coefficients computed by OSMN, we also compute those for the convLSTM modules. All the visual modulation coefficients are multiplied to the feature maps fi=γi⊙fi, where ⊙ indicates channel-wise multiplication. This has the effect of enhancing the maps related to the target object and suppressing the least useful, potentially distracting ones, allowing the segmentation network to quickly adapt to the object of interest without resorting to expensive steps of back-propagation at inference time.

To help discriminating between multiple instances of the same object and, more generally, to provide a loose prior on the location of the target object, the network is also enriched with a spatial attention mechanism. A rough estimate of the position of the target object can be obtained by fitting a “gaussian blob” on the segmentation predicted at time

t and fed to a Spatial Modulator component. This, in turn, produces a set of shift coefficients β, one for each of the last three VGG layers, via a 1×1 convolution applied on the blob downsampled to the layer’s resolution. Note that, as opposed to the VM case, we do not generate modulation coefficients for the convLSTM layers. The spatial coefficients are summed pixel-wise to the activations of the corresponding layers, therefore shifting the focus on the parts of the image where the object is more likely located. The combination of VM and SM, fi=γi⊙fi+βi, is then applied to the features.

In this section we describe the experimental settings used to evaluate the ReConvNet model.

To ensure a fair comparison between ReConvNet and the OSMN baseline we initialize the components of the OSMN model in our architecture with the pretrained weights as provided by the authors. This is done on both DAVIS2016 and DAVIS2017, to ensure that any improvement can be clearly attributed to the introduction of a recurrent architecture.

The model is trained with a lower learning rate for the non-recurrent than for the recurrent component, namely 10−6 and 10−5 respectively. We found it beneficial to train with the Lovasz loss [1] that directly optimizes the IoU measure. Finally, to prevent overfitting we employed early-stopping and data augmentation [14] of the inputs of the visual and spatial modulators with random shift, scale, and rotation transformations. When online fine-tuning is used, the model is trained on each test sequence with random transformation of the first frame for 300 iterations and learning rate 10−6 for all components.

In order to make use of the relative abundance of segmented static images for pre-training, we split the training process in two phases. First, we train the non-recurrent components of the model on MSCOCO [6] to learn segmentation coupled with modulation, then we train the full network on DAVIS2017 to account for the spatio-temporal recurrent component as well as to make use of the modulation to focus on the target object throughout the sequence.

The single frame pre-training procedure proved to be an essential proxy to bootstrap the temporal-consistent segmentation. In fact, DAVIS contains only a few examples for most semantic classes, making it very easy for the network to overfit on the training examples.

As it can be expected, the problem is exacerbated by models with high capacity, and even more by those that exploit a visual modulator to tackle semi-supervised segmentation. As shown in [17] the set of parameters Γ, produced by the visual modulator, pushes the model to learn a semantic mapping in an embedding space where visually similar objects are close in ℓ2 distance. Learning this mapping requires a large enough amount of diverse examples. We choose the MSCOCO [6] dataset for its wide range of classes and intra-class variations.

We first evaluate our model on DAVIS 2016, that focuses on single objects. This is a hard task that allows us to validate the model and to compare with the OSMN baseline. As shown in Table 1, thanks to the combination of spatio-temporal consistency given by the convLSTM units and their features modulation, ReConvNet outperforms OSMN by 5.4 points on the mean IoU (J-mean) metric and is 4-th in the leaderboard of the semi-supervised approaches111https://davischallenge.org/davis2016/soa_compare.html when comparing on the average between the J and F scores.

It is important to highlight that OSVOS [2], OSVOS-S  [7] and onAVOS [15] perform online fine-tuning on the first frame of the video sequence at inference time. Moreover, OSVOS utilizes a boundary snapping approach, onAVOS makes use of a CRF post-processing step, and OSVOS-S incorporates instance-aware semantic information from a state-of-the-art instance segmentation method to further improve the performance.

Most of these methods introduce expensive computation steps at inference time that are normally not needed when resorting to features modulation. Nothing prevents though to pair this technique with online fine-tuning or CRF post-processing to improve performance. Indeed, with a few steps of fine-tuning at inference time ReConvNet gains 6.9 points on the J&F-mean placing itself 0.5 points below onAVOS, which scored 2nd in the public leaderboard.

The most recent version of DAVIS introduces the challenging task of multiple objects segmentation. On this dataset ReConvNet has been trained by feeding the visual modulator with one randomly picked object from the scene at a time and using the segmentation of the same object in the current frame as target.  Table 1 shows that ReConvNet adapts very well to the multiobject task outperforming the baseline OSMN by 10.9 points on the J&F-mean metric. Remarkably, our method also outperforms the state-of-the-art OSVOS and onAVOS by 5.4 and 0.3 points, respectively, without the need of expensive online fine-tuning. Introducing online fine-tuning, the J&F-mean improves by 4.5, that is 2.2 points more than OSVOS-S, the current state of the art in the public leaderboard on the DAVIS2017 validation set.

We participated to the DAVIS Challenge 2018 retraining on the training set augmented with the validation set. Our preliminary evaluation on the test-dev set scored 52.7 and 62.9 on J&F-mean without and with online fine-tuning respectively, placing us 8-th in the test-dev public leaderboard.

On the test-challenge set ReConvNet scored 54.5 J&F-mean, and 51.8 and 57.2 J-mean and F-mean, respectively, ranking 10-th in the final DAVIS Challenge 2018 evaluation. This is an encouraging result considering that no online fine-tuning was employed: by adding gradient steps at inference time it is reasonable to expect a performance boost similar to the one consistently witnessed in the previous experiments.

We presented ReConvNet, a powerful and efficient recurrent convolutional model to perform semi-supervised video object segmentation. The model is able to learn spatio-temporal features that self-adapt to focus on the object of interest without the need of extra fine-tuning at inference time. ReConvNet outperforms the baseline by a considerable margin, proving the effectiveness of incorporating temporal consistency into the model. Our results reinforce the conjecture that features modulation is a valid approach to semi-supervised video object segmentation. We plan to perform a more in-depth analysis of the interaction between the temporal components and the features modulation, since we believe it is crucial to better understand the potential of the proposed model.

We thank Jürgen Schmidhuber and Imanol Schlag for helpful discussions on fast weights and Razvan Pascanu for insightful comments on the model. We are also grateful to AGS SpA for providing the NVIDIA 1080Ti machine to run all the experiments. Finally, our thoughts go to Aaron, Adriana and Michal, for giving the initial thrust to this work.