Practical brain-machine interfaces have been widely studied to accurately detect human intentions using brain signals in the real world. However, the electroencephalography (EEG) signals are distorted owing to the artifacts such as walking and head movement, so brain signals may be large in amplitude rather than desired EEG signals. Due to these artifacts, detecting accurately human intention in the mobile environment is challenging. In this paper, we proposed the reconstruction framework based on generative adversarial networks using the event-related potentials (ERP) during walking. We used a pre-trained convolutional encoder to represent latent variables and reconstructed ERP through the generative model which shape similar to the opposite of encoder. Finally, the ERP was classified using the discriminative model to demonstrate the validity of our proposed framework. As a result, the reconstructed signals had important components such as N200 and P300 similar to ERP during standing. The accuracy of reconstructed EEG was similar to raw noisy EEG signals during walking. The signal-to-noise ratio of reconstructed EEG was significantly increased as 1.3. The loss of the generative model was 0.6301, which is comparatively low, which means training generative model had high performance. The reconstructed ERP consequentially showed an improvement in classification performance during walking through the effects of noise reduction. The proposed framework could help recognize human intention based on the brain-machine interface even in the mobile environment. 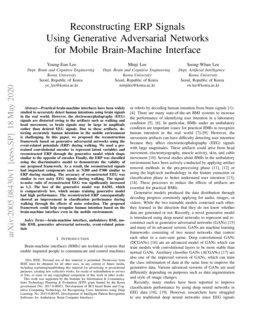 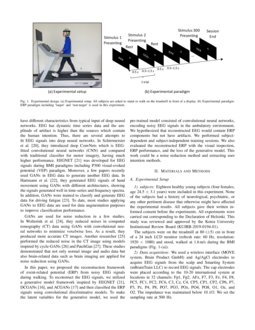 Brain-machine interfaces (BMIs) are technical systems that enable impaired people to communicate and control machines or robots by decoding human intention from brain signals [31, 19, 34, 4]. There are many state-of-the-art BMI systems to increase the performance of identifying user intention in a laboratory condition [16, 2]. In particular, BMIs under an ambulatory condition are important issues for practical BMIs to recognize human intention in the real world [7, 22, 23]. However, the movement artifacts can have difficulty detecting user intention because they affect electroencephalography (EEG) signals with large magnitudes. These artifacts could arise from head movement, electromyography, muscle activity, skin, and cable movement [30]. Several studies about BMIs in the ambulatory environment have been actively conducted by applying artifact removal methods in the pre-processing phase [24, 1]

[13, 21]. These processes to reduce the effects of artifacts are essential for practical BMIs.

Generative models produced the data distribution through decoding progress commonly applying for audio, images, or videos. While the two trainable models contested each other, they learned in the direction that they do not know whether data are generated or not. Recently, a novel generative model is introduced using deep neural networks to represent and reconstruct such as generative adversarial networks (GANs)

and many of its advanced version. GANs are machine learning frameworks consisting of two neural networks that contest each other in a zero-sum game. Deep convolutional GANs (DCGANs)

[27] are an advanced model of GANs which can train models with convolutional layers to be more stable than normal GANs. Auxiliary classifier GANs (ACGANs) [25] are also one of the improved version of GANs, which can train the class information of data at the same time to improve the generative data. Various advanced versions of GANs are used differently depending on purposes such as data augmentation and style of image changes.

, they introduced deep ConvNets which is EEG-fitted convolutional neural networks (CNN) and compared with traditional classifier for motor imagery, having much higher performance. EEGNET

GANs are used for noise reduction in a few studies. In Wolterink et al.[32], they reduced noises in computed tomography (CT) data using GANs with convolutional neural networks to minimize voxelwise loss. As a result, they produced more accurate CT images. Another researcher [3] performed the reduced noise in the CT image using models inspired by cycle-GANs [33] and PatchGan [9]. These studies demonstrated that not only normal image and audio data but also brain-related data such as brain imaging are applied for noise reduction using GANs.

In this paper, we proposed the reconstruction framework of event-related potential (ERP) from noisy EEG signals during walking. To reconstruct the EEG signals, we utilized a generative model framework inspired by EEGNET [15], DCGANs [27], and ACGANs [25] and then classified the ERP signals using convolutional discriminative models. To make the latent variables for the generative model, we used the pre-trained model consisted of convolutional neural networks, encoding noisy EEG signals in the ambulatory environment. We hypothesized that reconstructed EEG would contain ERP components but not have artifacts. We performed subject-dependent and subject-independent training sessions. We also evaluated the reconstructed ERP with the visual inspection, ERP performance, and the loss of the generative model. This work could be a noise reduction method and extracting user intention methods.

Eighteen healthy young subjects (four females, age 24.5 ± 3.1 years) were included in this experiment. None of the subjects had a history of neurological, psychiatric, or any other pertinent disease that otherwise might have affected the experimental results. All subjects gave their written informed consent before the experiments. All experiments were carried out corresponding to the Declaration of Helsinki. This study was reviewed and approved by the Korea University Institutional Review Board (KUIRB-2019-0194-01).

We acquired data of ERP based on the OpenBMI (http://openbmi.org) [17], BBCI (http://github.com/bbci/bbci_public) [12], and Psychophysics (http://psychtoolbox.org) toolboxes [11] in Matlab (The Mathworks, Natick, MA).

The discriminative model was inspired by EEGNET [15]

fitted to EEG data consisting of convolutional layers, leaky rectified linear unit (ReLU), dropout, max pooling, and batch normalization. While the input of the discriminative model is cleaned EEG signals and reconstructed EEG signals, the output is whether real or fake and the classes.

The generative model was similar to the opposite of the structure of the discriminative model, which consisting of dense, convolutional layer, batch normalization, up sampling, and zero padding. The latent variable was produced by convolutional pre-trained model inputting of each noisy EEG samples. While the input of generative model is latent variables, the output is the reconstructed signals which are the same shape of noisy EEG samples.

Generative model G generated the data distribution from latent values and discriminative model D distinguished the data whether fake or not (validity). We used an advanced model of GANs that can offer not only the validity of data but also classification. The D of GANs is trained to maximize the log-likelihood of validity LS and classification LC, which can be represented by following as:

All data were applied high-pass filter at 0.5 Hz and epoched into the time-interval between –200 ms and 800 ms based on the trigger. In reconstructed EEG signals, we selected one channel at Pz where the amplitude of ERP is apparent. To divide the dataset, we performed cross-validation for each subject which we left one subject as test set and trained rest subject dataset. This is named leave-one-subject-out which is cross validation inter trials but inter subjects

. For the pre-trained data, we trained neural networks with walking dataset and tested standing dataset. As we managed the imbalanced data for training, we reduced the number of non-target trials as same as target trials. We trained GANs in each batch, the size with 32, using loss function cross-entropy for validity and classification of ERP, and mean squared error for generative model loss of calculating between the original input signals and reconstructing signals. We trained model using Adam optimizer

with a learning rate of 0.0002 and the exponential decay rates of the 1st moment estimates of the gradient 0.5

We performed the training in subject-independent sessions. We have presented quantitative metrics indicating the training quality and diversity. Generative model and discriminative model were evaluated by visual inspection, classification performance, and signal-to-noise ratio (SNR). The statistic analysis of a two-tailed paired t-test was performed in the confidence level of 95% and 99%.

showed the accuracy of standing data, noisy data during walking at 1.6 m/s, and reconstructed data. The classification performance was calculated by areas under the receiver operating characteristic curve (AUC). The AUC of EEG signals during walking decreased rather than standing condition because of the distortion of EEG signals with great amplitude in the mobile environment. However, the averaged AUC of reconstructed data was similar to walking condition.

The SNR is an essential indicator of noise reduction, which is calculated by the root mean square (RMS) of the amplitude of peaks at P300 divided by RMS of the average amplitude of pre-stimulus baseline (-200 ms – 0 ms) at channel Pz [28]. Fig. 4 showed the average of SNR for standing, walking, and reconstructed data. The SNR during walking decreased than standing data because of data distorting due to motion artifacts. However, applying GANs led to an increase in SNR significantly (p<0.01). This is because the amplitude of noise at pre-stimulus would be reduced a lot rather than P300 in reconstructed EEG signals. The SNR of reconstructed signals is even higher than EEG signals during standing.

In this paper, we proposed the ERP reconstruction framework from noisy signals during walking using GANs. In the mobile environment such as walking or running, the EEG signals contain great amplitude of artifacts, which is much huger than user intention. Therefore, there have been many challenges to enhance the BMI performance in the mobile environment by developing artifact removal methods, extracting critical features from brain signals, and developing classifiers using deep neural networks. Because of the properties of EEG, the neural networks for EEG would be different from the networks for images. One of the deep neural networks for EEG was deep ConvNets, which considered kernel size regarding channels and time series. Generating EEG signals using the generative model is a novel approach and combining deep ConvNets and generative model provided EEG signals generation. We constructed GANs able to not only generate the data and classify validity but also can do classification. For the dataset, we collected data of EEG signals during walking at 1.6 m/s on the treadmill, and performed oddball ERP paradigm.

The reconstructed data through GANs had significant components such as N200 and P300 similar to EEG signals during standing. Moreover, the SNR of reconstructed data was much higher than noisy signals in the walking environment. The reconstructing progress was diverse so that it produced various samples of ERPs containing N200 and P300. The loss of the generative model was comparatively low that means training generator had high performance. Therefore, it is thought to extract or reconstruct ERP components from noisy EEG signals which can enhance the ERP performance. The proposed framework would directly help BMIs in the mobile environment to reduct noise in terms of SNR. In the future, we would advance the model to improve the classification performance. Moreover, we will train all 32 channels of EEG signals to reconstruct ERP signals.