A vertex subset I of a graph G is called a k-path vertex cover if every path on k vertices in G contains at least one vertex from I. The k-Path Vertex Cover Reconfiguration (k-PVCR) problem asks if one can transform one k-path vertex cover into another via a sequence of k-path vertex covers where each intermediate member is obtained from its predecessor by applying a given reconfiguration rule exactly once. We investigate the computational complexity of k-PVCR from the viewpoint of graph classes under the well-known reconfiguration rules: TS, TJ, and TAR. The problem for k=2, known as the Vertex Cover Reconfiguration (VCR) problem, has been well-studied in the literature. We show that certain known hardness results for VCR on different graph classes including planar graphs, bounded bandwidth graphs, chordal graphs, and bipartite graphs, can be extended for k-PVCR. In particular, we prove a complexity dichotomy for k-PVCR on general graphs: on those whose maximum degree is 3 (and even planar), the problem is PSPACE-complete, while on those whose maximum degree is 2 (i.e., paths and cycles), the problem can be solved in polynomial time. Additionally, we also design polynomial-time algorithms for k-PVCR on trees under each of TJ and TAR. Moreover, on paths, cycles, and trees, we describe how one can construct a reconfiguration sequence between two given k-path vertex covers in a yes-instance. In particular, on paths, our constructed reconfiguration sequence is shortest. 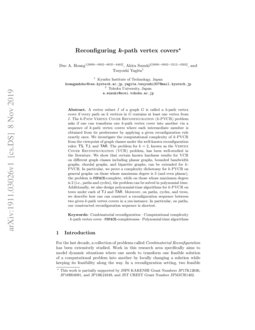 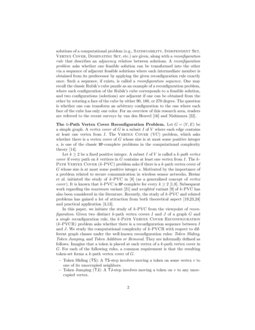 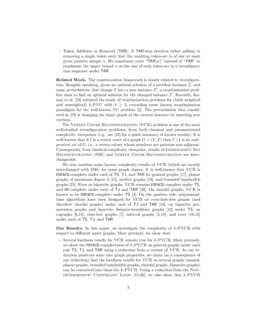 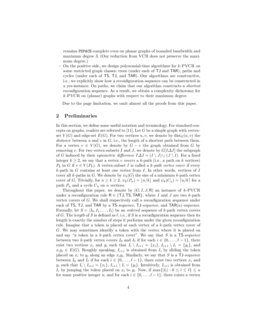 The technique of kernelization consists in extracting, from an instance ...
Clement Carbonnel, et al. ∙

A sweep-cover is a vertex separator in trees that covers all the nodes b...
Blake Wilson, et al. ∙

Asymptotic enumeration of digraphs and bipartite graphs by degree sequence

We provide asymptotic formulae for the numbers of bipartite graphs with ...
Anita Liebenau, et al. ∙