In this letter, the joint power control of D2D users and the passive beamforming of reconfigurable intelligent surfaces (RIS) for a RIS-aided device-to-device (D2D) communication network is investigated to maximize energy efficiency. This non-convex optimization problem is divided into two subproblems, which are passive beamforming and power control. The two subproblems are optimized alternately. We first decouple the passive beamforming at RIS based on the Lagrangian dual transform. This problem is solved by using fractional programming. Then we optimize the power control by using the Dinkelbach method. By iteratively solving the two subproblems, we obtain a suboptimal solution for the joint optimization problem. Numerical results have verified the effectiveness of the proposed algorithm, which can significantly improve the energy efficiency of the D2D network. 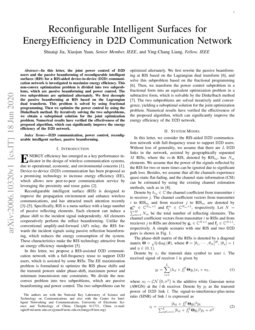 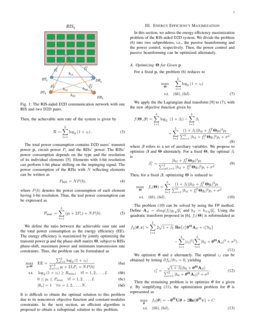 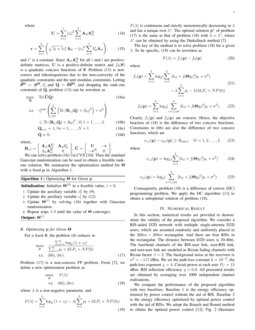 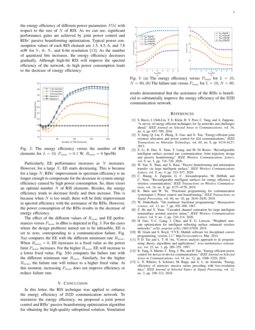 Energy efficiency has emerged as a key performance indicator in the design of wireless communication systems, due to operational, economic, and environmental concerns [1]. Device-to-device (D2D) communication has been proposed as a promising technology to increase energy efficiency (EE), which allows new peer-to-peer communication service by leveraging the proximity and reuse gains [2].

Reconfigurable intelligent surface (RIS) is designed to improve the propagation environment and enhance wireless communications, and has attracted much attention recently [3, 4, 5]. Specifically, RIS is a meta-surface with a large number of passive reflecting elements. Each element can induce a phase shift to the incident signal independently. All elements cooperatively perform the reflect beamforming. Unlike the conventional amplify-and-forward (AF) relay, the RIS forwards the incident signals using passive reflection beamforming, which reduces the energy consumption of the system. These characteristics make the RIS technology attractive from an energy efficiency standpoint [5].

In this letter, we propose a RIS-assisted D2D communication network with a full-frequency reuse to support D2D users, which is assisted by some RISs. The EE maximization problem is formulated to optimize the RIS phase shifts and the transmit powers under phase-shift, maximum power and minimum transmission rate constraints. We divide the non-convex problem into two subproblems, which are passive beamforming and power control. The two subproblems can be optimized alternately. We first rewrite the passive beamforming at RIS based on the Lagrangian dual transform [6], and solve this subproblem based on the fractional programming [6]. Then, we transform the power control subproblem in a fractional form into an equivalent optimization problem in a subtractive form, which is solvable by the Dinkelbach method [7]. The two subproblems are solved iteratively until convergence, yielding a suboptimal solution for the joint optimization problem. Numerical results have verified the effectiveness of the proposed algorithm, which can significantly improve the energy efficiency of the D2D network.

In this letter, we consider the RIS-aided D2D communication network with full-frequency reuse to support D2D users. Without loss of generality, we assume that there are L D2D links in the network, assisted by geographically separated M RISs, where the m-th RIS, denoted by RISm, has Nm

elements. We assume that the power of the signals reflected by the RIS for two or more times can be ignored due to significant path loss. Besides, we assume that all the channels experience quasi-static flat-fading, and the channel state information (CSI) can be estimated by using the existing channel estimation methods, such as in

. The channel coefficient vectors from transmitter

i to RISm and from receiver j to RISm are denoted by gmi∈CNm×1 and fmj∈CNm×1, respectively. Let N=∑Mm=1Nm be the total number of reflecting elements. The channel coefficient vectors from transmitter i to RISs and from receiever j to RISs are denoted by gi∈CN×1 and fj∈CN×1, respectively. A simple scenario with one RIS and two D2D pairs is shown in Fig. 1.

Denote by xi the transmit data symbol to user i. The received signal of receiver l is given by

where wl∼CN(0,σ2) is the additive white Gaussian noise (AWGN) at the l-th receiver. Denote by pl as the transmit power of D2D link l. The signal-to-interference-plus-noise ratio (SINR) of link l is expressed as

Then, the achievable sum rate of the system is given by

We define the ratio between the achievable sum rate and the total power consumption as the energy efficiency (EE). The energy efficiency is maximized by jointly optimizing the transmit power p and the phase-shift matirx Θ, subject to RIS’s phase-shift, maximum power and minimum transmission rate constraints. Thus, the problem can be formulated as

Iii-a Optimizing Θ for Given p

For a fixed p, the problem (6) reduces to

We apply the the Lagrangian dual transform [9] to (III-A), with the new objective function given by

where β refers to a set of auxiliary variables. We propose to optimize β and Θ alternately. For a fixed Θ, the optimal βl is

Then, for a fixed β, optimizing Θ is reduced to

The problem (III-A) can be solved by using the FP method. Define Ail=diag(fl)gi√pi and bil=hil√pi. Using the quadratic transform proposed in [6], f1(Θ) is reformulated as

We optimize θ and ε alternately. The optimal εl can be obtained by letting ∂f2/∂εl=0, yielding

Then the remaining problem is to optimize θ for a given ε. By simplifying (11), the optimization problem for θ is represented as

and C is a constant. Since AilAHil for all i and l are positive-definite matrices, U is a positive-definite matrix and f3(θ) is a quadratic concave functions of θ. Problem (III-A) is non-convex and inhomogeneous due to the non-convexity of the quadratic constraints and the unit modulus constraints. Letting ¯θH=[θH,1] and Q=¯θ¯θH, and dropping the rank-one constraint of Q, problem (III-A) can be rewritten as

We can solve problem (16) via CVX [10]. Then the standard Gaussian randomization can be used to obtain a feasible rank-one solution. We summarize the optimization method for Θ with a fixed p in Algorithm 1.

Iii-B Optimizing p for Given Θ

For a fixed θ, the problem (6) reduces to

Problem (III-B) is a non-concave FP problem. From [7], we define a new optimization problem as

where λ is a non-negative parameter, and

F(λ) is continuous and strictly monotonically decreasing in λ and has a unique root λ∗. The optimal solution p∗ of problem (III-B) is the same as that of problem (III-B) with λ=λ∗, where λ∗ can be obtained by using the Dinkelbach method [7].

The key of the method is to solve problem (III-B) for a given λ. To be specific, (19) can be rewritten as

Consequently, problem (III-B) is a difference of convex (DC) programming problem. We apply the DC algorithm [11] to obtain a suboptimal solution of problem (18).

In this section, numerical results are provided to demonstrate the validity of the proposed algorithm. We consider a RIS-aided D2D network with multiple single-antenna D2D users, which are assumed randomly and uniformly placed in the 200m×200m rectangular. And there are four RISs in the rectangular. The distance between D2D users is 20-40m. The baseband channels of the RIS-user link, user-RIS link, and user-user link are modeled as Rician fading channels with Rician factor β=2. The background noise at the receivers is σ2=−117 dBm. We set the path-loss constant k=10−3, the path-loss exponent χ=4. Circuit power at each user PC=15 dBm. RIS reflection efficiency η=0.8. All presented results are obtained by averaging over 1000 independent channel realizations.

Particularly, EE performance increases as N increases. However, for a large N, EE starts decreasing. This is because for a large N, RISs’ improvement in spectrum efficiency is no longer enough to compensate for the decrease in system energy efficiency caused by high power consumption. So, there exists an optimal number N of RIS elements. Besides, the energy efficiency tends to decrease firstly and then increase. This is because when N is too small, there will be little improvement in spectral efficiency with the assistance of the RISs. However, the power consumption of the RISs results in the decrease of energy efficiency.

The effect of the different values of Rmin and EE performances versus Pmax in dBm is depicted in Fig. 3. For the cases where the design problems turned out to be infeasible, EE is set to zero, corresponding to a communication failure. Fig. 3(a) compares the EE with the different minimum rate Rmin. When Rmin=0, EE increases to a fixed value as the power limit Pmax increases. For the higher Rmin, EE will increase to a lower fixed value. Fig. 3(b) compares the failure rate with the different minimum rate Rmin. Similarly, for the higher Rmin

, the failure rate will reduce to a higher fixed value. At this moment, increasing

Pmax does not improve efficiency or reduce failure rate.