Magnetic resonance imaging (MRI) is one of the best medical imaging modalities as it offers excellent spatial resolution and soft-tissue contrast. But, the usage of MRI is limited by its slow acquisition time, which makes it expensive and causes patient discomfort. In order to accelerate the acquisition, multiple deep learning networks have been proposed. Recently, Generative Adversarial Networks (GANs) have shown promising results in MRI reconstruction. The drawback with the proposed GAN based methods is it does not incorporate the prior information about the end goal which could help in better reconstruction. For instance, in the case of cardiac MRI, the physician would be interested in the heart region which is of diagnostic relevance while excluding the peripheral regions. In this work, we show that incorporating prior information about a region of interest in the model would offer better performance. Thereby, we propose a novel GAN based architecture, Reconstruction Global-Local GAN (Recon-GLGAN) for MRI reconstruction. The proposed model contains a generator and a context discriminator which incorporates global and local contextual information from images. Our model offers significant performance improvement over the baseline models. Our experiments show that the concept of a context discriminator can be extended to existing GAN based reconstruction models to offer better performance. We also demonstrate that the reconstructions from the proposed method give segmentation results similar to fully sampled images. 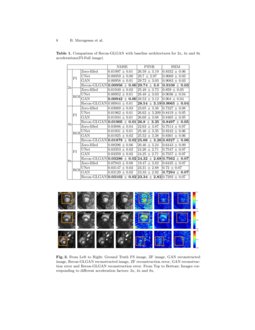 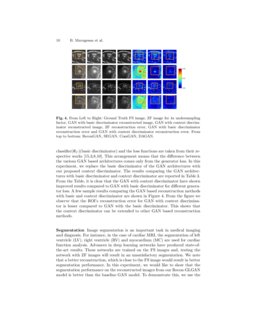 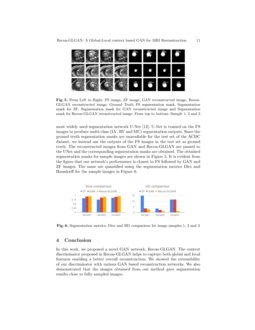 Medical imaging is the preliminary step in many clinical scenarios. Magnetic resonance imaging (MRI) is one of the leading diagnostic modalities which can produce images with excellent spatial resolution and soft tissue contrast. The major advantages of MRI include its non-invasive nature and the fact that it does not use radiation for imaging. However, the major drawback of MRI is the long acquisition time, which causes discomfort to patients and hinders applications in time critical diagnoses. This relatively slow acquisition process could result in significant artefacts due to patient movement and physiological motion. The slow acquisition time of MRI can be attributed to data samples not being collected directly in the image space but rather in k-space. k-space contains spatial-frequency information that is acquired line-by-line by the MRI hardware. In order to accelerate the MRI acquisition process, various methods ranging from Partial Fourier Imaging, Compressed Sensing and Dictionary Learning have been developed [4].

[9] for MRI reconstruction can be broadly grouped into two : 1) k-space to image domain: the fully sampled image is obtained from zero-filled k-space. Examples include AUTOMAP and ADMM-Net. 2) image to image domain: the fully sampled (FS) image is obtained from the zero-filled (ZF) image. Our focus will be on the models of the latter kind. The work by Wang et al. [14]

was the first to use convolutional neural networks to learn the mapping between ZF and FS images. Generative Adversarial Networks (GAN)

have shown promising results in many ill-posed inverse problems such as inpainting, super-resolution and denoising when compared to other deep learning based methods. The MRI reconstruction problem, having a similar problem formulation, has been approached with GANs and have shown encouraging results. The main focus of our paper is thus the application of GANs for the MRI reconstruction problem.

, the generator is a residual network, the discriminator is a general deep network classifier and a combination of L1 and adversarial loss constitutes the loss function. Similarly, another work ReconGAN

We refer to the concept of application-driven MRI as described in [2]: incorporating prior information about the end goal in the MRI reconstruction process would likely result in better performance. For instance, in the case of cardiac MRI reconstruction, the physician would be interested in the heart region, which is of diagnostic relevance while excluding the peripheral regions. Using this prior information about the region of interest (ROI) could lead to a better reconstruction. Another perspective is to note that the MRI reconstruction is not the goal in itself, but a means for further processing steps to extract relevant information such as segmentation or tissue characterisation. In general, segmentation algorithms would be interested in the specific ROI. Thus, incorporating prior information about the ROI in the reconstruction process would give two fold benefits : 1) The reconstruction would be better, 2) The segmentation algorithms consequently, could offer better results. The GAN based reconstruction methods described above did not incorporate the application perspective of MRI. Recently, [13] proposed a method in an application-driven MRI context, where the segmentation mask is obtained directly from a ZF image. This work showed encouraging results, but the model produces only the mask as output while the physician would be interested in viewing the FS image. Incorporating the ideas stated above, we propose a novel GAN based approach for MRI reconstruction. A brief outline of our approach compared to baseline GAN approaches is shown in Figure 1. The key contributions of our work can be summarized as follows:

Let xf∈CN be the fully sampled complex image with dimensions √N×√N arranged in column-wise manner. xf is obtained from fully sampled k-space measurements (yf∈CN) through a fully sampled encoding matrix Ff using the relation yf=Ffxf. During undersampling, a subset of kspace measurements (yu∈CM) say (M<<N) only are made. This corresponds to an undersampled image xu by the relation xu=F−1uyu. xu will be aliased due to sub-Nyquist sampling. Reconstructing xf directly from yu is ill-posed and direct inversion is not possible due to under-determined nature of system of equations. In our approach, we use deep learning network to learn the mapping between xu and xf. The neural network thus learns to minimize the error between predicted fully sampled image (^xf) and the ground truth (xf).

We propose a novel GAN architecture called Reconstruction Global-Local GAN (Recon-GLGAN). The idea is inspired from a GAN based work [5]

in the context of image inpainting. The idea behind Recon-GLGAN is to capture both the global and local contextual features. Recon-GLGAN consists of a generator and a context discriminator. The generator (G) tries to learn the mapping between data distribution of ZF image

ΨG(x)||ΨL(x)) to classify the input image as real/fake. The overview of the proposed architecture is shown in Figure 2. The joint optimization of the generator and context discriminator parameters is given by:

The most commonly used encoder-decoder architecture U-Net [12] is used as the generator.

The loss function to accommodate our network design is given below:

where Limag is the L1 loss between predicted and target fully sampled image, Lcontext is the context adversarial loss.

Automated Cardiac Diagnosis Challenge (ACDC) [1] is a cardiac MRI segmentation dataset. The dataset has 150 and 50 patient records for training and testing respectively. From the patient records, 2D slice images are extracted and cropped to 160×160. The extracted 2D slices amount to 1841 for training and 1076 for testing. The slices are normalized to the range (0-1). In the context of MRI reconstruction, the slice images are considered as FS images while the ZF images are obtained through cartesian undersampling masks corresponding to 2x, 4x and 8x accelerations.

The ROI for the MR images in the test set is obtained by following the algorithm described in [7]. This ROI information is not used for inference, it is used only to evaluate the ROI’s reconstruction quality.

To evaluate the proposed network, we perform the following experiments:

1) We compare our proposed Recon-GLGAN with the baseline architecture GAN, U-Net, and the ZF images. The metrics for each model for the whole image as well as ROI are shown in Table 1. The results show that our model Recon-GLGAN performs better than the baseline GAN and U-Net across all metrics for all acceleration factors.

We also note that our model offers appreciable performance improvement for 4x and 8x acceleration factors compared to 2x. This can be attributed to the fact that the image degradation in the case of 2x is not severe when compared with 4x and 8x. The qualitative comparison of ZF, GAN and Recon-GLGAN for different acceleration factors are shown in Figure 3

. In the Figure, it can be observed that reconstruction error of Recon-GLGAN for entire image and its ROI is better than GAN. But, it is evident that, the reconstruction error of Recon-GLGAN is significantly better than GAN in the ROI compared with the entire image. This behaviour can be attributed to the design of context discriminator which has a separate feature extraction path for specified ROI. The design of context discriminator enables the generator to specifically learn the ROI along with the entire image during the training phase.

Image segmentation is an important task in medical imaging and diagnosis. For instance, in the case of cardiac MRI, the segmentation of left ventricle (LV), right ventricle (RV) and myocardium (MC) are used for cardiac function analysis. Advances in deep learning networks have produced state-of-the-art results. These networks are trained on the FS images and, testing the network with ZF images will result in an unsatisfactory segmentation. We note that a better reconstruction, which is close to the FS image would result in better segmentation performance. In this experiment, we would like to show that the segmentation performance on the reconstructed images from our Recon-GLGAN model is better than the baseline GAN model.

In this work. we proposed a novel GAN network, Recon-GLGAN. The context discriminator proposed in Recon-GLGAN helps to capture both global and local features enabling a better overall reconstruction. We showed the extensibility of our discriminator with various GAN based reconstruction networks. We also demonstrated that the images obtained from our method gave segmentation results close to fully sampled images.