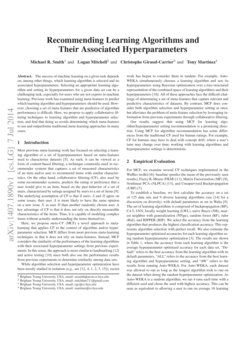 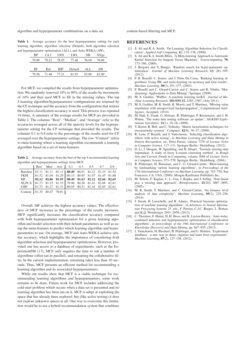 The results from most machine learning experiments are used for a specif...
Michael R. Smith, et al. ∙

Towards better understanding of meta-features contributions

Meta learning is a difficult problem as the expected performance of a mo...
Katarzyna Woznica, et al. ∙

Meta Learning by the Baldwin Effect

The scope of the Baldwin effect was recently called into question by two...
Chrisantha Thomas Fernando, et al. ∙

A deeper understanding of the drivers of evapotranspiration and the mode...
Adam Stapleton, et al. ∙

Learning to Tune XGBoost with XGBoost

In this short paper we investigate whether meta-learning techniques can ...
Johanna Sommer, et al. ∙

It is typical for a machine learning system to have numerous hyperparame...
Dobromir Marinov, et al. ∙

Most previous meta-learning work has focused on selecting a learning algorithm or a set of hyperparameters based on meta-features used to characterize datasets [5]. As such, it can be viewed as a form of content-based filtering, a technique commonly-used in recommender systems that captures a set of measured characteristics of an item and/or user to recommend items with similar characteristics. On the other hand, collaborative filtering (CF), also used by some recommender systems, predicts the rating or preference that a user would give to an item, based on the past behavior of a set of users, characterized by ratings assigned by users to a set of items [9]. The underlying assumption of CF is that if users A and B agree on some issues, then user A is more likely to have the same opinion on a new issue X as user B than another randomly chosen user. A key advantage of CF is that it does not rely on directly measurable characteristics of the items. Thus, it is capable of modeling complex items without actually understanding the items themselves.

Here, we propose meta-CF (MCF) a novel approach to meta-learning that applies CF in the context of algorithm and/or hyperparameter selection. MCF differs from most previous meta-learning techniques in that it does not rely on meta-features. Instead, MCF considers the similarity of the performance of the learning algorithms with their associated hyperparameter settings from previous experiments. In this sense, the approach is more similar to landmarking [12] and active testing [10] since both also use the performance results from previous experiments to determine similarity among data sets.

. All of these approaches face the difficult challenge of determining a set of meta-features that capture relevant and predictive characteristics of datasets. By contrast, MCF does consider both algorithm selection and hyperparameter setting at once, but alleviates the problem of meta-feature selection by leveraging information from previous experiments through collaborative filtering.

Our results suggest that using MCF for learning algorithm/hyperparameter setting recommendation is a promising direction. Using MCF for algorithm recommendation has some differences from the traditional CF used for human ratings. For example, CF for humans may have to deal with concept drift, where a user’s taste may change over time; working with learning algorithms and hyperparameter settings is deterministic.

For MCF, we examine several CF techniques implemented in the Waffles toolkit [6]

To establish a baseline, we first calculate the accuracy on a set of 125 data sets and 9 diverse learning algorithms (see [14] for a discussion on diversity) with default parameters as set in Weka [8]. The set of learning algorithms is composed of backpropagation (BP), C4.5, k

For MCF, we compiled the results from hyperparameter optimization. We randomly removed 10% to 90% of the results by increments of 10% and then used MCF to fill in the missing values. The top 4 learning algorithm/hyperparameter configurations are returned by the CF technique and the accuracy from the configuration that returns the highest classification accuracy is used. This process was repeated 10 times. A summary of the average results for MCF are provided in Table 2. The columns “Best”, “Median”, and “Average” refer to the accuracies averaged across all of the sparsity levels for the hyperparameter setting for the CF technique that provided the results. The columns 0.1 to 0.9 refer to the percentage of the results used for CF averaged over the hyperparameter settings. The row “Content” refers to meta-learning where a learning algorithm recommends a learning algorithm based on a set of meta-features.

Overall, MF achieves the highest accuracy values. The effectiveness of MCF increases as the percentage of the results increases. MCF significantly increases the classification accuracy compared with both hyperparameter optimization for a given learning algorithm and model selection with their default parameters as well as using the meta-features to predict which learning algorithm and hyperparameters to use. On average, MCF and Auto-WEKA achieve similar accuracy, which highlights the importance of considering both algorithm selection and hyperparameter optimization. However, provided one has access to a database of experiments, such as the ExperimentDB [17], MCF only requires the time to run a number of algorithms (often ran in parallel), and retraining the collaborative filter. In the current implementation, retraining takes less than 10 seconds. Thus, MCF presents an efficient method for recommending a learning algorithm and its associated hyperparameters.

While our results show that MCF is a viable technique for recommending learning algorithms and hyperparameters, some work remains to be done. Future work for MCF includes addressing the cold-start problem which occurs when a data set is presented and no learning algorithm has been ran on it. MCF is adept at exploiting the space that has already been explored, but (like active testing) it does not explore unknown spaces at all. One way to overcome this limitation would be to use a hybrid recommendation system that combines content-based filtering and MCF.