Social recommendation, which utilizes social relations to enhance recommender systems, has been gaining increasing attention recently with the rapid development of online social network. Existing social recommendation methods are based on the fact that users preference or decision is influenced by their social friends' behaviors. However, they assume that the influences of social relation are always the same, which violates the fact that users are likely to share preference on diverse products with different friends. In this paper, we present a novel CSR (short for Characterized Social Regularization) model by designing a universal regularization term for modeling variable social influence. Our proposed model can be applied to both explicit and implicit iteration. Extensive experiments on a real-world dataset demonstrate that CSR significantly outperforms state-of-the-art social recommendation methods. 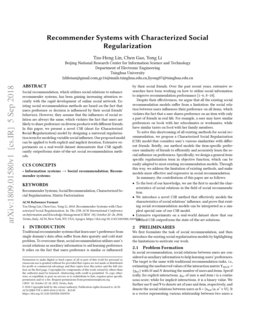 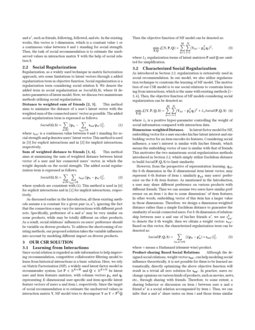 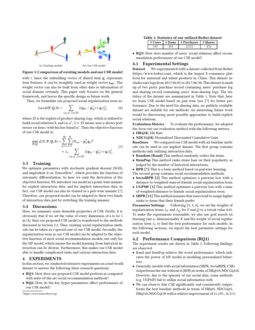 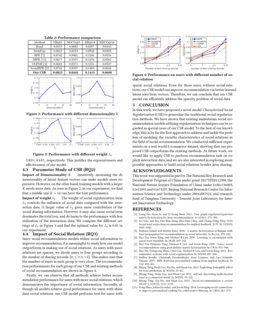 Despite their effectiveness, we argue that all the existing social recommendation models suffer from a limitation: the social relation between users influences their preference on all items, which violates the fact that a user shares preference on an item with only a part of friends in real life. For example, a user may have similar preferences on book with her schoolmates or workmates, while have similar tastes on food with her family members.

To solve this shortcoming of all existing methods for social recommendation, we propose a Characterized Social Regularization (CSR) model that considers user’s various similarities with different friends. Briefly, our method models the item-specific preference similarity of friends to efficiently and accurately learn the social influence on preferences. Specifically, we design a general item-specific regularization term in objective function, which can be easily adapted to most existing recommendation models. Through this way, we address the limitation of existing methods, and make models more effective and expressive in social recommendation.

In summary, the contributions of this paper are as follows:

We first formulate the task of social recommendation, and then introduce the existing social regularization models by highlighting the limitations to motivate our work.

In social recommendation, social relations between users are considered as auxiliary information to help learning users’ preferences. The target is the same with traditional recommendation tasks, i.e.

, estimating the unobserved values of the interaction matrix

YM×N={yui} with M and N denoting the number of users and items. Specifically, for explicit interactions, yui of user u and item i is a continuous score; while for implicit interactions, it is a binary value. We further use U and V to denote set of user and item, respectively, and denote the social relations between users as S = {suu′|u,u′∈U}

. It is a vector representing various relationship between two users

u and u′, such as friends, following, followed, and etc. In the existing works, this vector is 1-dimension, which is a constant value 1 or a continuous value between 0 and 1 standing for social strength. Then, the task of social recommendation is to estimate the unobserved values in interaction matrix Y with the help of social relation S.

Distance to weighted sum of friends (Jamali and Ester, 2010; Guo et al., 2015).     This method aims to minimize the distance of a user’s latent vector with the weighted sum of the connected users’ vector as possible. The added social regularization term is expressed as follows:

where suu′ is a continuous value between 0 and 1 standing for social strength and p denotes users’ latent vector. This method is used in (Jamali and Ester, 2010) for explicit interactions and in (Guo et al., 2015) for implicit interactions, respectively.

As discussed earlier in the Introduction, all these existing methods assume s is constant for a given pair (u,u′), ignoring the fact that the connection s may vary for interactions with different products. Specifically, preference of u and u′ may be very similar on some products, while may be totally different on other products. As a result, social relations’ influences on users’ preference should be variable on diverse products. To address the shortcoming of existing methods, our proposed solution takes the variable influences into account by modeling different impact on diverse products.

Since social relation is regarded as side information to help improving recommendation, competitive collaborative filtering model to learn from historical interactions is a basic solution. Here, we rely on Matrix Factorization (MF), a widely used latent factor model in recommender system. Let P∈RK×M and Q∈RK×N be latent user and item features matrices, with column vectors pu and qi representing K-dimensional user-specific and item-specific latent feature vectors of users u and item i, respectively. Since the target of social recommendation is to estimate the unobserved values in interaction matrix Y, MF model tries to decompose Y as Y=PTQ. Then the objective function of MF model can be denoted as:

where L2 regularization terms of latent matrices P and Q are omitted for simplification.

where λs is a positive hyper-parameter controlling the weight of social information compared with interaction data.

However, from the perspective of representation learning, qik, the k-th dimension in the K-dimensional item latent vector, may represent k-th feature of item i; similarly puk may users’ preference on the k-th item feature. As mentioned in the Introduction, a user may share different preference on various products with different friends. Then we can assume two users have similar preference on an item i is due to some dimensions’ of item features. In other words, embedding vector of this item has a larger value in those dimensions. Therefore, we design a dimension-weighted distance rather than a simple Euclidean distance to guarantee the similarity of social-connected users. For k-th dimension of relationship between user u and one of his/her friends u′, we use skuu′ to denote the k-th weight, then we obtain a weight vector: suu′. Based on this vector, the characterized regularization term can be denoted as:

Product-sharing Based Social Relations     Although the designed social relations, weight vector suu′, can help modeling social influence theoretically, it is not possible for them to be learned automatically, directly optimizing the above objective function will result in a trivial all zero solution for suu′. In practice, users exchange opinions on various kinds of products, such as movies, news, etc., through sharing with friends. Therefore, to some extent, a sharing behavior or discussion on item i between user u and a friend u′ is a social relation accompanied by item i. Thus, we can infer that u and u′ share tastes on item i and those items similar with i. Since the embedding vector of shared item qi represents item features, it can be straightly used as weight vector suu′. The weight vector can also be built from other data or information of social domain certainly. This paper only focuses on the general framework, and leaves the specific design as future work.

Thus, we formulate our proposed social regularization term as:

where D is the triplets of product-sharing logs, which is utilized to build social relations S, and (u,u′,i)∈D means user u shows preference on item i with his/her friend u′. Then the objective function of our CSR model is:

We optimize parameters with stochastic gradient descent (SGD), and implement it on Tensorflow

Here, we summary some desirable properties of CSR. Firstly, it is obviously that if we set the value of every dimension of s to be 1 in (5), then our proposed CSR model is transferred to the methods discussed in Section 2.2. Thus, existing social regularization methods can be taken as a special case of our CSR model. Secondly, the regularization term in our CSR model can be adapted to the objective function of most social recommendation models, not only for the MF model, which means the model learning from historical interaction can be diverse. Furthermore, this makes our CSR model able to handle complicated tasks and various interaction data.

In this section, we conducted extensive experiments on a real-world dataset to answer the following three research questions:

Dataset     We experimented with a dataset collected from Beibei (https://www.beibei.com), which is the largest E-commerce platform for maternal and infant products in China. This dataset includes user logs from 2017/06/01 to 2017/06/30. This dataset is made up of two parts: purchase record containing users’ purchase log and sharing record containing users’ item-sharing logs. The statistics of the dataset are summarized in Table 1. Note that, here we learn CSR model based on pair-wise loss (Rendle et al., 2009) for better performance. Due to the need for sharing data, no publicly available dataset are suitable for our methods. An interesting future work would be discovering more possible approaches to build explicit social relations.

Evaluation Metrics     To evaluate the performance, we adopted the leave-one-out evaluation method with the following metrics.

Baselines     We compared our CSR model with six baseline methods can be used in our implicit dataset. The first group contains methods only utilizing interaction data.

Parameter Settings     Following (Ma et al., 2008, 2011; Jamali and Ester, 2010), we set the weights of regularization terms λP and λQ for P and Q to a trivial value 0.01. To make the experiments reasonable, we also use grid search on learning rate α, dimensionality K and the weight of social regularization term λs to find the best performance for each models. In the following sections, we report the best parameter settings for each model.

The experiment results are shown in Table 2. Following findings are observed.

Impact of Dimensionality K     Intuitively, increasing the dimensionality of latent feature vectors can make models more expressive. However, on the other hand, training models with a larger K needs more data. As seen in Figure 3, in our experiment, we find that a middle size K=16 can have the best performance.

Impact of weight λs     The weight of social regularization term λs controls the influence of social data compared with the interaction data. A larger value of λs gives more contribution of the social sharing information. However, it may also cause social term dominates the total loss, and do harm to the performance with less utilization of the interaction data. We compare the different settings of λs in Figure 3 and find the optimal value for λs is 0.01 in our experiment.

In this work, we have proposed a novel model Characterized Social Regularization (CSR) to generalize the traditional social regularization methods. We have shown that existing mainstream social recommendation models utilizing regularization techniques can be regarded as special cases of our CSR model. To the best of our knowledge, this is by far the first approach to address and tackle the problem of modeling the variable characteristics of social relations in the field of social recommendation. We conducted sufficient experiments on a real-world E-commerce dataset, showing that our proposed CSR outperforms the existing methods. As future work, we would like to apply CSR to perform recommendation task on explicit interaction data, and we are also interested in exploring more possible approaches to build social relations besides item sharing.

This work was supported in part by The National Key Research and Development Program of China under grant 2017YFE0112300, the National Nature Science Foundation of China under 61861136003, 61621091 and 61673237, Beijing National Research Center for Information Science and Technology under 20031887521, and research fund of Tsinghua University - Tencent Joint Laboratory for Internet Innovation Technology.