The problem of realizing finite metric spaces in terms of weighted graphs has many applications. For example, the mathematical and computational properties of metrics that can be realized by trees have been well-studied and such research has laid the foundation of the reconstruction of phylogenetic trees from evolutionary distances. However, as trees may be too restrictive to accurately represent real-world data or phenomena, it is important to understand the relationship between more general graphs and distances. In this paper, we introduce a new type of metric called a cactus metric, that is, a metric that can be realized by a cactus graph. We show that, just as with tree metrics, a cactus metric has a unique optimal realization. In addition, we describe an algorithm that can recognize whether or not a metric is a cactus metric and, if so, compute its optimal realization in O(n^3) time, where n is the number of points in the space. 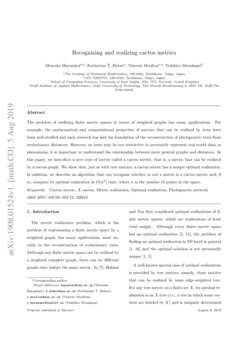 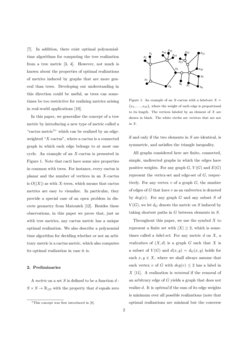 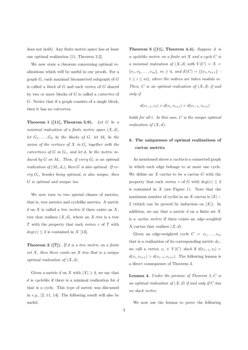 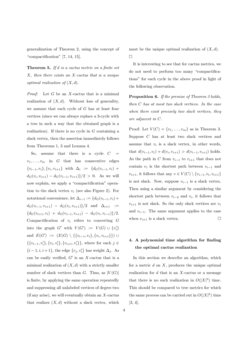 A well-known special case of optimal realizations is provided by tree metrics, namely, those metrics that can be realized by some edge-weighted tree. For any tree metric on a finite set X, its optimal realization is an X-tree (i.e., a tree in which some vertices are labeled by X) and is uniquely determined hak . In addition, there exist optimal polynomial-time algorithms for computing the tree realization from a tree metric bat ; culb . However, not much is known about the properties of optimal realizations of metrics induced by graphs that are more general than trees. Developing our understanding in this direction could be useful, as trees can sometimes be too restrictive for realizing metrics arising in real-world applications huson .

In this paper, we generalize the concept of a tree metric by introducing a new type of metric called a “cactus metric111This concept was first introduced in hay .” which can be realized by an edge-weighted “X-cactus”, where a cactus is a connected graph in which each edge belongs to at most one cycle. An example of an X-cactus is presented in Figure 1. Note that cacti have some nice properties in common with trees. For instance, every cactus is planar and the number of vertices in an X-cactus is O(|X|) as with X-trees, which means that cactus metrics are easy to visualize. In particular, they provide a special case of an open problem in discrete geometry from Matoušek mat . Besides these observations, in this paper we prove that, just as with tree metrics, any cactus metric has a unique optimal realization. We also describe a polynomial time algorithm for deciding whether or not an arbitrary metric is a cactus metric, which also computes its optimal realization in case it is.

A metric on a set S is defined to be a function d:S×S→R≥0 with the property that d equals zero if and only if the two elements in S are identical, is symmetric, and satisfies the triangle inequality.

All graphs considered here are finite, connected, simple, undirected graphs in which the edges have positive weights. For any graph G, V(G) and E(G) represent the vertex-set and edge-set of G, respectively. For any vertex v of a graph G, the number of edges of G that have v as an endvertex is denoted by deg(v). For any graph G and any subset S of V(G), we let dG denote the metric on S induced by taking shortest paths in G between elements in S.

Throughout this paper, we use the symbol X to represent a finite set with |X|≥2, which is sometimes called a label-set. For any metric d on X, a realization of (X,d) is a graph G such that X is a subset of V(G) and d(x,y)=dG(x,y) holds for each x,y∈X, where we shall always assume that each vertex v of G with deg(v)≤2 has a label in X imrich84 . A realization is minimal if the removal of an arbitrary edge of G yields a graph that does not realize d. It is optimal if the sum of its edge weights is minimum over all possible realizations (note that optimal realizations are minimal but the converse does not hold). Any finite metric space has at least one optimal realization (imrich84, , Theorem 2.2).

We now state a theorem concerning optimal realizations which will be useful in our proofs. For a graph G, each maximal biconnected subgraph of G is called a block of G and each vertex of G shared by two or more blocks of G is called a cutvertex of G. Notice that if a graph consists of a single block, then it has no cutvertex.

Let G be a minimal realization of a finite metric space (X,d), let G1,…,Gk be the blocks of G, let Mi be the union of the vertices of X in Gi together with the cutvertices of G in Gi, and let di be the metric induced by G on Mi. Then, if every Gi is an optimal realization of (Mi,di), then G is also optimal. If every Gi, besides being optimal, is also unique, then G is optimal and unique too.

We now turn to two special classes of metrics, that is, tree metrics and cyclelike metrics. A metric d on X is called a tree metric if there exists an X-tree that realizes (X,d), where an X-tree is a tree T with the property that each vertex v of T with deg(v)≤2 is contained in X ss13 .

If d is a tree metric on a finite set X, then there exists an X-tree that is a unique optimal realization of (X,d).

Given a metric d on X with |X|≥4, we say that d is cyclelike if there is a minimal realization for d that is a cycle. This type of metric was discussed in e.g., rubei18 ; imrich84 ; unicyclic . The following result will also be useful.

holds for all i. In this case, C is the unique optimal realization of (X,d).

3 The uniqueness of optimal realizations of cactus metrics

As mentioned above a cactus is a connected graph in which each edge belongs to at most one cycle. We define an X-cactus to be a cactus G with the property that each vertex v of G with deg(v)≤2 is contained in X (see Figure 1). Note that the maximum number of cycles in an X-cactus is |X|−2 (which can be proved by induction on |X|). In addition, we say that a metric d on a finite set X is a cactus metric if there exists an edge-weighted X-cactus that realizes (X,d).

Given an edge-weighted cycle C=v1,…,vm that is a realization of its corresponding metric dC, we call a vertex vi∈V(C) slack if d(vi−1,vi)+d(vi,vi+1)>d(vi−1,vi+1). The following lemma is a direct consequence of Theorem 3.

Under the premise of Theorem 3, C is an optimal realization of (X,d) if and only if C has no slack vertex.

We now use the lemma to prove the following generalization of Theorem 2, using the concept of “compactification” hak ; unicyclic ; compactification .

If d is a cactus metric on a finite set X, then there exists an X-cactus that is a unique optimal realization of (X,d).

Proof: Let G be an X-cactus that is a minimal realization of (X,d). Without loss of generality, we assume that each cycle of G has at least four vertices (since we can always replace a 3-cycle with a tree in such a way that the obtained graph is a realization). If there is no cycle in G containing a slack vertex, then the assertion immediately follows from Theorems 1, 3 and Lemma 4.

It is interesting to see that for cactus metrics, we do not need to perform too many “compactifications” for each cycle in the above proof in light of the following observation.

4 A polynomial time algorithm for finding the optimal cactus realization

In this section we describe an algorithm, which for a metric d on X, produces the unique optimal realization for d that is an X-cactus or a message that there is no such realization in O(|X|3) time. This should be compared to tree metrics for which the same process can be carried out in O(|X|2) time bat ; culb .

Given a metric d on X, we can determine if there is an edge-weighted cycle C that is an optimal realization of (X,d) and, if so, compute C in O(|X|2) time.

Proof: We describe an algorithm that takes an arbitrary metric d on X as input, which in case d has an optimal realization that is a cycle computes this cycle, and stops if this is not the case:

Given a metric d on X, we can determine if d is a cactus metric and if so construct its optimal realization in O(|X|3) time.

Proof: In (HVcutpoint, , Algorithm 2) Hertz and Varone give a polynomial time algorithm for decomposing an arbitrary metric space (X,d) into finite metric spaces (Mi,di), 1≤i≤k, with |Mi|≤|X|, such that any optimal realization of (Mi,di) must consist of a single block, and such that an optimal realization for d can be constructed by piecing together the optimal realizations for the (Mi,di). They also observe (HVcutpoint, , p.174) that this decomposition can be computed in O(|X|3) time using results in dress10 (see also (dress10, , p.160)). In addition, by the arguments in (dress10, , Lemma 3.1), it follows that k is O(|X|).

Assume that we have decomposed (X,d) into {(Mi,di)}i∈{1,…,k} by using the aforementioned preprocessing algorithm. In case |Mi|=2, its optimal realization is obviously a tree. Recalling the argument in the proof of Theorem 5, we know that |Mi|≠3 holds for each i∈{1,…,k}. For each (Mi,di) with |Mi|≥4, by using the algorithm in Lemma 6, we can check if (Mi,di) has an optimal realization that is a cycle or not, and if so construct the cycle in O(|Mi|2) time (and hence O(|X|2) time suffices). If there is some i∈{1,…,k} such that |Mi|≥4 and (Mi,di) does not have an optimal realization that is a cycle, then d is not a cactus metric, else d is a cactus metric, and we can construct the cactus by piecing together the optimal realizations for the (Mi,di). Using the aforementioned fact that k is O(|X|), we conclude that the overall time complexity is O(|X|3). ∎

It may be worth investigating as to whether there is a more direct and efficient algorithm than the one given in Theorem 7 for recognizing and/or realizing cactus metrics that use structural properties of cactus graphs. More generally, we could investigate optimal realizations for metrics that can be realized by graphs G in which every block Gi=(Vi,Ei) satisfies |Ei|−|Vi|+1≤k, and such that every vertex in G with degree at most 2 is contained in X. Here, we note that in case k=0, G is an X-tree, and in case k=1, G is an X-cactus. However, even in case k=2, there may be infinitely many optimal realizations (e.g. the metric given in (alt, , Fig. 15)). So it might be interesting to first understand for k≥2 which of these metrics have a unique optimal realization, whether such metrics can be recognized in polynomial time, and whether there exists a polynomial time algorithm for computing some optimal realization.