In this paper, we make an investigation of receive antenna selection (RAS) strategies in the secure pre-coding aided spatial modulation (PSM) system with the aid of artificial noise. Due to a lack of the closed-form expression for secrecy rate (SR) in secure PSM systems, it is hard to optimize the RAS. To address this issue, the cut-off rate is used as an approximation of the SR. Further, two low-complexity RAS schemes for maximizing SR, called Max-SR-L and Max-SR-H, are derived in the low and high signal-to-noise ratio (SNR) regions, respectively. Due to the fact that the former works well in the low SNR region but becomes worse in the medium and high SNR regions while the latter also has the similar problem, a novel RAS strategy Max-SR-A is proposed to cover all SNR regions. Simulation results show that the proposed Max-SR-H and Max-SR-L schemes approach the optimal SR performances of the exhaustive search (ES) in the high and low SNR regions, respectively. In particular, the SR performance of the proposed Max-SR-A is close to that of the optimal ES and better than that of the random method in almost all SNR regions. 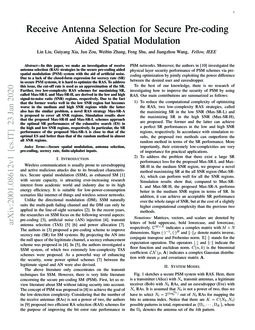 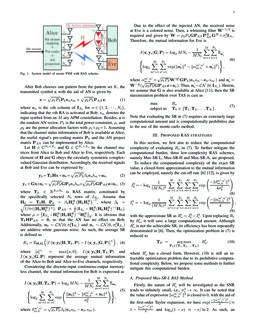 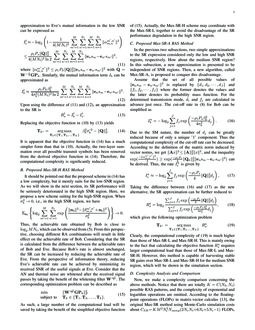 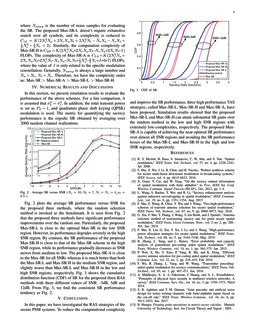 In this paper, given the beamforming vector of confidential messages and...
Simin Wan, et al. ∙

In this paper, given the beamforming vector of confidential messages and...
Simin Wan, et al. ∙

Wireless communication is usually prone to eavesdropping and active malicious attacks due to its broadcast characteristics. Secure spatial modulation (SSM), as enhanced SM [1] with secure capacity, is attracting ever-increasing research interest from academic world and industry due to its high energy efficiency. It is suitable for low-power-consumption scenarios like internet of things and wireless sensor networks.

Unlike the directional modulation (DM), SSM naturally suits the multi-path fading channel and the DM can only be applied in the line-of-sight scenarios [2]. In the recent years, the researches on SSM focus on the following several aspects: pre-coding [3], artificial noise (AN) injection [4], transmit antenna selection (TAS)[5][6] and power allocation [7]. The authors in [3] proposed a pre-coding scheme to improve secrecy rate (SR) for SM systems. By projecting the AN into the null space of the legitimate channel, a secrecy enhancement scheme was proposed in [4]. In [5], the authors investigated a SSM system, of which two extremely low-complexity TAS schemes were proposed. As a powerful way of enhancing the security, some power spitted schemes [7] between the legitimate signal and AN were also devised.

The above literature only concentrates on the transmit techniques for SSM. However, there is very little literature concerning the secure pre-coding SM (PSM). First, let us review literature about SM without taking security into account. The concept of PSM was proposed in [8] to achieve the goal of the low-detection complexity. Considering that the number of the receive antennas (RAs) is not a power of two, the authors in [9] proposed two efficient RA selection (RAS) schemes for the purpose of improving the bit error rate performance in PSM networks. Moreover, the authors in [10] investigated the physical layer security performance of PSM schemes via pre-coding optimization by jointly exploiting the power difference between the desired user and eavesdropper.

To the best of our knowledge, there is no research of investigating how to improve the security of PSM by using RAS. Our main contributions are summarized as follows:

Matrices, vectors, and scalars are denoted by letters of bold uppercase, bold lowercase, and lowercase, respectively.

μ and covariance matrix A.

Fig. 1 sketches a secure PSM system with RAS. Here, there is a transmitter (Alice) with Na transmit antennas, a legitimate receiver (Bob) with Nb RAs, and an eavesdropper (Eve) with Ne RAs. It is assumed that Nb is not a power of two, thus we have to select Nt=2⌊logNb2⌋ out of Nb RAs for mapping the bits to antenna index. Notice that there are K=C(Nb,Nt) possible patterns in total, represented as {Ω1,⋯,ΩK}, where the Ωk denotes the antenna set of the kth pattern.

After Bob chooses one pattern from the pattern set K, the transmitted symbol x with the aid of AN is given by

where en is the nth column of INb for n∈{1,2,⋯,Nt}, indicating that the nth RA is activated at Bob; sm denotes the input symbol from an M-ary APM constellation. Besides, z is the random AN vector, PS is the total power constraint, ρ1 and ρ2 are the power allocation factors with ρ1+ρ2=1. Assuming that the channel status information of Bob is available at Alice, the useful signal’s pre-coding matrix Pk and the AN project matrix PAN can be implemented by Alice.

Let H∈CNb×Na and G∈CNe×Na be the channel matrices from Alice to Bob and Alice to Eve, respectively. Each element of H and G obeys the circularly symmetric complex-valued Gaussian distribution. Accordingly, the received signals at Bob and Eve can be expressed by

where Tk∈RNt×Nb is RAS matrix, constituted by the specifically selected Nt rows of INb. Assume that Hk=TkH. Pk=βkHHk(HkHHk)−1, where βk=√1/tr((HkHHk)−1). PAN=1μ(INa−HHk(HkHHk)−1Hk), where . It is obvious that TkHPAN=0, so that the AN has no effect on Bob. Additionally, nb∼CN(0,σ2bINt) and ne∼CN(0,σ2eINe) are additive white gaussian noise. As such, the average SR is defined as

Considering the discrete-input continuous-output memoryless channel, the mutual information for Bob is expressed as

Due to the effect of the injected AN, the received noise at Eve is a colored noise. Then, a whitening filter W−1/2 is required and given by W=ρ2PSGPANPHANGH+σ2eINe. Therefore, the mutual information for Eve is

Note that evaluating the SR in (7) requires an extremely large computational amount and is computationally prohibitive due to the use of the monte-carlo method.

To reduce the computational complexity of the exact SR value, a closed-form approximation to the mutual information can be employed, namely the cut-off rate [6][12], is given by

with the approximate SR as R′s=I0b−I0e. Upon replacing Rs by R′s, it will save a large computational amount. Although R′s is not the achievable SR, its efficiency has been repeatedly demonstrated in [6]. Then, the optimization problem in (7) is reduced to

where R′s has a closed form. However, (10) is still an intractable optimization problem due to its prohibitive computational complexity. Below, we propose some methods to further mitigate this computational burden.

Firstly, the nature of R′s will be investigated as the SNR tends to infinitely small, i,e., σ2e→∞. It can be noted that the value of expression ∥αm′,n′m,n∥2 is closed to 0, with the aid of the first-order Taylor expansion, we have exp(−∥αm′,n′m,n∥24)≈1−∥αm′,n′m,n∥24 and log2(1−x)≈−x/ln2. As such, an approximation to Eve’s mutual information in the low SNR can be expressed as

where ∥αm′,n′m,n∥2≤ρ1PS∥Q∥22∥ensm−en′sm′∥2 with Q=W−12GPk. Similarly, the mutual information term Ib can be approximated as

Replacing the objective function in (10) by (13) yields

As such, a large number of the computational load will be saved by taking the benefit of the simplified objective function of (15). Actually, the Max-SR-H scheme may coordinate with the Max-SR-L together to avoid the disadvantage of the SR performance degradation in the high SNR region.

In the previous two subsections, two simple approximations to the SR expression considered only the low and high SNR regions, respectively. How about the medium SNR region? In this subsection, a new approximation is presented to be independent of SNR regions. Then, a new algorithm, called Max-SR-A, is proposed to conquer this disadvantage.

where the former denotes the values and the latter denotes its probability mass function. For the determined transmission mode,

di and fj are calculated in advance just once. The cut-off rate in (8) for Bob can be simplified as

Due to the SM nature, the number of dj can be greatly reduced because of only a unique ’1’ component. Thus the computational complexity of the cut-off rate can be decreased. According to the definition of the matrix norm induced by vector norms, we get ∥Ax∥2≤∥A∥22∥x∥2, and the inequality exp(−∥αm′,n′m,n∥24)≥exp(−ρ1Ps4∥Qk∥22∥ensm−en′sm′∥2) can be derived. Thus, the rate Ihe is given by

Taking the difference between (16) and (17) as the new alternative, the SR approximation can be further reduced to

which gives the following optimization problem

Now, we make a complexity comparison concerning the above methods. Notice that there are totally K=C(Nb,Nt) possible RAS patterns, and the complexity of exponential and logarithm operations are omitted. According to the floating-point operations (FLOPs) in matrix-vector calculus [13], the original Max-SR method using Monte-Carlo simulation costs about CSR=KM2N2tNsamp(2NeNt+6Nt+5Ne−1) FLOPs, where Nsamp is the number of noise samples for evaluating the SR. The proposed Max-SR-L doesn’t require exhaustive search over all symbols, and its complexity is reduced to C1L=K(2N2eNa+2NeNaNt+2N2eNt−NeNa−NeNt+13N3e−43Ne+3). Similarly, the computation complexity of Max-SR-H is C2H=K(2N2eNa+2NeNaNt−NeNa+2NeNt−1) FLOPs. The complexity of Max-SR-A is C3A=K(2N2eNa+2NeNaNt+2N2eNt−NeNa−NeNt+13N3e−43Ne+J∗6+7) FLOPs, where the value of J is only related to the specific modulation constellation. Generally, Nsamp is always a large number and Na>Nt, Nt=Ne. Therefore, we have the complexity order as: Max-SR > Max-SR-A > Max-SR-L > Max-SR-H.

In this section, we present simulation results to evaluate the performance of the above schemes. For a fair comparison, it is assumed that σ2b=σ2e. In addition, the total transmit power is set as PS=1, and quadrature phase shift keying (QPSK) modulation is used. The metric for quantifying the secrecy performance is the ergodic SR obtained by averaging over 2000 random channel realizations.

shows the cumulative distribution function (CDF) of SR for the proposed three RAS methods with three different values of SNR: -3dB, 3dB and 12dB. From Fig.

3, we find the consistent SR performance tendency as Fig. 2.

In this paper, we have investigated the RAS strategies of the secure PSM systems. To reduce the computational complexity and improve the SR performance, three high performance TAS strategies, called Max-SR-L, Max-SR-H and Max-SR-A, have been proposed. Simulation results showed that the proposed Max-SR-L and Max-SR-H can attain substantial SR gains over the random method in the low and high SNR regions with extremely low-complexities, respectively. The proposed Max-SR-A is capable of achieving the near-optimal SR performance over almost all SNR regions and avoiding the SR performance losses of the Max-SR-L and Max-SR-H in the high and low SNR regions, respectively.