This paper describes the development of a real-time Human-Robot Interaction (HRI) system for a service robot based on 3D human activity recognition and human-like decision mechanism. The Human-Robot Interactive (HRI) system, which allows one person to interact with a service robot using natural body language, collects sequences of 3D skeleton joints comprising rich human movement information about the user via Microsoft Kinect. This information is used to train a three-layer Long-Short-Term Memory (LSTM) network for human action recognition. The robot understands user intent based on an online LSTM network test, and responds to the user via movements of the robotic arm or chassis. Furthermore, the human-like decision mechanism is also fused into this process, which allows the robot to instinctively decide whether to interrupt the current task according to task priority. The framework of the overall system is established on the Robot Operating System (ROS) platform. The real-life activity interaction between our service robot and the user was conducted to demonstrate the effectiveness of developed HRI system. 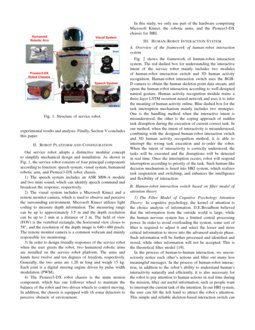 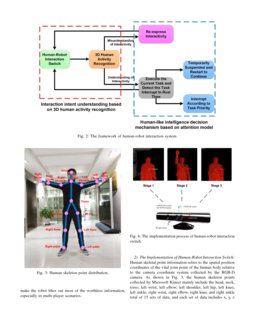 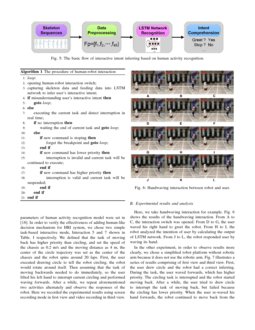 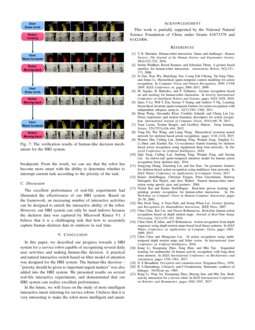 A Neurorobotics Approach to Behaviour Selection based on Human Activity Recognition

Continual Learning from Synthetic Data for a Humanoid Exercise Robot

As robots move into our lives, the importance of enabling users to interact with them in a natural way increases [1]. Non-verbal communication has become the most natural manner between robots and users. Therefore, the robot with the capability of understanding human body language is a trend of development in HRI system.

In the past few years, gesture or activity recognition on RGB video processing has been widely studied and applied in various fields [2, 3, 4, 5, 6]

. They attempted to learn discriminative features to enhance identification performance of human activities. However, hand-crafted features only have limited discriminative power, another drawback is that the 2D image only involves limited body movement information. With the rise of deep learning techniques

Unfortunately, the motivation of aforementioned approaches is that obtaining more accurate recognition results on a benchmark does not pay sufficient attention to the cost of time. And now there is no any one method can achieve 100% recognition accuracy, if the robot identification failed, corresponding wrong interactive task will go on until finished, which is time-consuming and power-hungry. Besides, if the robot is performing a task, a higher priority task is coming, the existing HRI system based on human’s activity recognition will have to wait for the end of the current task, which looks very silly.

This work demonstrates progress towards a HRI system for a service robot capable of understanding common multi-modal human activities in real time and determining whether to interrupt current interactive task cleverly. The 3D data of the skeleton joints consist of rich body movement information, which is collected from users via Microsoft Kinect and is used to train a three-layer Long-Short-Term Memory (LSTM) [7] network for user’s activity recognition. Our previous work [18] elaborated the model and learning method. In this work, we described a interaction switch based on filter model of attention theory, simple and efficient gesture tells the service robot to start interaction. Combined with the interaction switch, human-mimicking decision mechanism of interrupting interactive tasks was also designed. Interruption can be triggered by the user when the interaction switch turns on, human-mimicking decision – ”priority should be given to important urgent matters” will be executed. The overall HRI system was implemented into the Robot Operating System (ROS) and evaluated on a service robot. Results from human-robot interaction experiments showed that aforementioned well-designed rules enabled the robot to become more smart.

The remainder of the paper is organized as follows. Section II describes the robot platform for HRI. Section III contains an overview of the human-robot interaction system framework and elaborates the details of method. Section IV provides the experimental results and analysis. Finally, Section V concludes this paper.

1) The speech system includes an ASR M08-A module and two mini sound, which can identify speech command and broadcast the response, respectively.

2) The visual system includes a Microsoft Kinect and a remote monitor camera, which is used to observe and perceive the surrounding environment. Microsoft Kinect utilizes light coding to measure depth information. The measuring range can be up to approximately 3.5 m and the depth resolution can be up to 2 mm at a distance of 2 m. The field of view (FOV) is the vertebral rectangle, the horizontal view closes to 58∘, and the resolution of the depth image is 640×480 pixels. The remote monitor camera is a common webcam and mainly responsible for monitoring.

3) In order to design friendly responses of the service robot when the user greets the robot, two humanoid robotic arms are installed on the service robot platform. The arms and hands have twelve and ten degrees of freedom, respectively. Generally, the two arms are 1.26 m long and weigh 15 kg. Each joint is a digital steering engine driven by pulse width modulation (PWM).

4) The Pioneer3-DX robot chassis is the main motion component, which has one follower wheel to maintain the balance of the robot and two driven wheels to control moving. In addition, the chassis is equipped with 16 sonar detectors to perceive obstacle of environment.

In this study, we only use part of the hardware comprising Microsoft Kinect, the robotic arms, and the Pioneer3-DX chassis for HRI.

Iii-a Overview of the framework of human-robot interaction system

In cognitive psychology, the kernel of attention is the choice analysis of information. D.E.Broadbent believed that the information from the outside world is large, while the human nervous system has a limited central processing power. In order to avoid overloading the system, some sort of filter is required to adjust it and select the lesser and more critical information to move into the advanced analysis phase. Such information will be further processed and identified and stored, while other information will not be accepted. This is the theoretical filter model [19].

In the process of human-to-human interaction, we unconsciously notice each other’s actions and filter out many less meaningful messages. In the process of human-robot interaction, in addition to the robot’s ability to understand human’s interactivity naturally and efficiently, it is also necessary for the robot to pay attention to human actions in real time during the mission, filter out useful information, such as people want to interrupt the current task of the intention. In our HRI system, the user can lift the left hand to attract the robot’s attention. This simple and reliable skeleton-based interaction switch can make the robot filter out most of the worthless information, especially in multi-player scenarios.

Human skeletal point information refers to the spatial position coordinates of the vital joint point of the human body relative to the camera coordinate system collected by the RGB-D camera. As shown in Fig. 3

where Fn represents the human skeleton point data in the n-th frame.

In the theory of attention in human’s cognitive psychology, attention refers to the direction and concentration of a certain object by a mental activity. Following the characteristics of the notable object, we use the left hand gesture to turn on the interaction, which can stably and reliably attract the service robot’s attention.

Fig. 5 illustrates the basic flow of interactive intent inferring based on human activity recognition. First, turning on the human-robot interaction switch to collect the skeleton data of user’s activity. Then, the skeleton data will be pre-processed by affine transformation to reduce the sensitivity from differences of user’s location. Finally, we adopt LSTM networks to model human activity and determine user’s interactive intent. The more details of three-layers LSTM model can be found in our previous work [18].

After acquisition of user’s interactive intent, the service robot responds correspondingly. Table. I shows eight types of interaction between the user and the robot. Here are two motion responses we designed for the robot: the motion of the robotic arm (Interaction 1, 3, 4 and 8) and the movement of the chassis (Interaction 2, 5, 6 and 7). For robotic arm motion control, the kinematics model is established using the Denavit-Hartenberg method [20]. Concrete parameters of the model can be found in our previous work [21]. For robotic chassis motion control, in order to stop the robot movement, the speed of chassis is set as 0. Moving forward and backward are both assigned fixed speed and mileage parameters, circling is corresponding to spinning. These responses will be executed when the robot understands the corresponding human activities.

We completed real-life human-robot interaction experiments in the hall including eight interactions between a human and the robot mentioned by Table. I. In our experiments, the parameters of human activity recognition model were set in [18]. In order to verify the effectiveness of adding human-mimicking decision mechanism for HRI system, we chose two simple task-based interactive mode, Interaction 5 and 7 shown in Table. I respectively. We defined that the task of moving back has higher priority than circling, and set the speed of the chassis as 0.2 m/s and the moving distance as 4 m, the center of the circle trajectory was set as the center of the chassis and the robot spins around 20 laps. First, the user executed drawing circle to tell the robot circling, the robot would rotate around itself. Then assuming that the task of moving backwards needed to do immediately, so the user lifted his left hand to interrupt current circling and performed waving forwards. After a while, we repeat aforementioned two activities alternately and observe the responses of the robot. Here we recorded the experimental results using screen recording mode in first view and video recording in third view.

In the other experiment, in order to observe results more clearly, we chose a simplified robot platform without robotic arm because it does not use the robotic arm. Fig. 7 illustrates a series of results comprising of first view and third view. First, the user drew circle and the robot had a correct inferring. During the task, the user waved forwards, which has higher priority. The circling task is interrupted and the robot started moving back. After a while, the user tried to drew circle to interrupt the task of moving back, but failed because the circling has lower priority. When the user re-waved his hand forwards, the robot continued to move back from the breakpoint. From the result, we can see that the robot has become more smart with the ability to determine whether to interrupt current task according to the priority of the task.

The excellent performance of real-life experiments had illustrated the effectiveness of our HRI system. Based on the framework, an increasing number of interactive activities can be designed to enrich the interactive ability of the robot. However, our HRI system can only be used indoors because the skeleton data was captured by Microsoft Kinect V1. I believe that it is a challenging task that how to accurately capture human skeleton data in outdoors in real time.

In this paper, we described our progress towards a HRI system for a service robot capable of recognizing several daily user activities and making human-mimicking decision. A practical and natural interactive switch based on filter model of attention was designed for the HRI system. The human-mimicking decision – ”priority should be given to important urgent matters” was also added into the HRI system. We presented results on several real-life interactive experiments, and demonstrated that our HRI system can realize excellent performance.

In the future, we will focus on the study of more intelligent interactive intent inferring for service robots. I believe that it is very interesting to make the robot more intelligent and smart.

This work is partially supported by the National Natural Science Foundation of China under Grants 61673378 and 61421004.