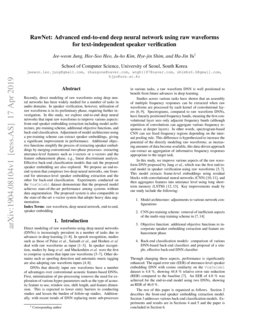 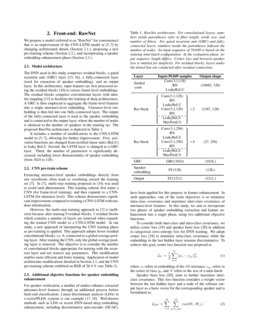 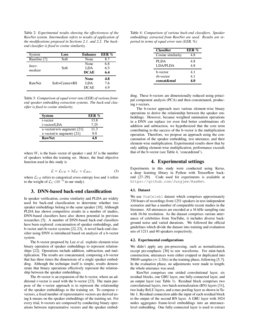 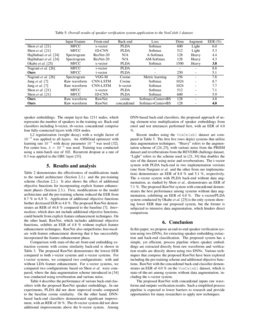 Input utterance with short duration is one of the most critical threats ...
Jee-weon Jung, et al. ∙

Deep Speaker Verification: Do We Need End to End?

DNNs that directly input raw waveforms have a number of advantages over conventional acoustic feature-based DNNs. First, minimization of pre-processing removes the need for exploration of various hyper-parameters such as the type of acoustic feature to use, window size, shift length, and feature dimension. This is expected to lower entry barriers to conducting studies and lessen the burden of follow-up studies. Additionally, with recent trends of DNN replacing more sub-processes in various tasks, a raw waveform DNN is well positioned to benefit from future advances in deep learning.

Studies across various tasks have shown that an assembly of multiple frequency responses can be extracted when raw waveforms are processed by each kernel of convolutional layers [6, 9]. Spectrograms, compared to raw waveform DNNs, have linearly positioned frequency bands, meaning the first convolutional layer sees only adjacent frequency bands (although repetition of convolutions can aggregate various frequency responses at deeper layers). In other words, spectrogram-based CNN can see fixed frequency regions depending on the internal pooling rule. This difference is hypothesized to increase the potential of the directly modeling raw waveforms; as increasing amounts of data become available, this data-driven approach can extract an aggregation of informative frequency responses appropriate to the target task.

In this study, we improve various aspects of the raw waveform DNN proposed by Jung et al., which was the first end-to-end model in speaker verification using raw waveforms [5, 7]

[12, 13]. Key improvements made by our study include the following:

Through changing these aspects, performance is significantly enhanced. The equal error rate (EER) of utterance-level speaker embedding DNN with cosine similarity on the

The rest of this paper is organized as follows. Section 2 describes the front-end speaker embedding extraction model. Section 3 addresses various back-end classification models. Experiments and results are in Sections 4 and 5 and the paper is concluded in Section 6.

We propose a model (referred to as “RawNet” for convenience) that is an improvement of the CNN-LSTM model in [5, 7] by changing architectural details (Section 2.1.), proposing a new pre-training scheme (Section 2.2.), and incorporating a speaker embedding enhancement phase (Section 2.3.).

It includes a number of modifications to the CNN-LSTM model in [5, 7]

, allowing for further improvement. First, activation functions are changed from rectified linear units (ReLU) to leaky ReLU. Second, the LSTM layer is changed to a GRU layer. Third, the number of parameters is significantly decreased, including lower dimensionality of speaker embedding (from 1024 to 128).

Extracting utterance-level speaker embeddings directly from raw waveforms often leads to overfitting toward the training set [7]. In [7], multi-step training proposed in [14] was used to avoid such phenomenon. This training scheme first trains a CNN (for frame-level training), and then expands to a CNN-LSTM (for utterance level). This scheme demonstrates significant improvement compared to training a CNN-LSTM with random initialization.

However, the multi-step training approach in [7] is inefficient because after training 9 residual blocks, 3 residual blocks which contains a number of layers are removed when expanding the trained CNN model to a CNN-LSTM model. In our study, a new approach of interpreting the CNN training phase as pre-training is applied. This approach adopts fewer residual convolutional blocks, i.e. 6, connected to a global average pooling layer. After training the CNN, only the global average pooling layer is removed. The objective is to consider the number of convolutional blocks appropriate for training with the recurrent layer and not remove any parameters. This modification enables more efficient and faster training. Application of model architecture modifications detailed in Section 2.1, and the CNN pre-training scheme exhibited an RER of 26.4 % (see Table 2).

For speaker verification, a number of studies enhance extracted utterance-level features through an additional process before back-end classification. Linear discriminant analysis (LDA) in i-vector/PLDA systems is one example [17, 18]. Well-known methods such as LDA or recent DNN-based deep embedding enhancement, including discriminative auto-encoder (DCAE), have been applied for this purpose in feature enhancement. In such approaches, one of the main objectives is to minimize intra-class covariance and maximize inter-class covariance of utterance-level features. In this study, we aim to incorporate two phases of speaker embedding extraction and feature enhancement into a single phase, using two additional objective functions.

To consider both inter-class and intra-class covariance, we utilize center loss [19] and speaker basis loss [20] in addition to categorical cross-entropy loss for DNN training. We adopt center loss [19]

to minimize intra-class covariance while the embedding in the last hidden layer remains discriminative. To achieve this goal, center loss function was proposed as

Speaker basis loss [20], aims to further maximize inter-class covariance. This loss function considers a weight vector between the last hidden layer and a node of the softmax output layer as a basis vector for the corresponding speaker and is formulated as:

where Wi is the basis vector of speaker i and M is the number of speakers within the training set. Hence, the final objective function used in this study is

where LCE refers to categorical cross-entropy loss and λ refers to the weight of LC (10−4 in our study).

The b-vector approach uses various element-wise binary operations to derive the relationship between the speaker embeddings. However, because weighted summation operations in a DNN can replace (or even find better combinations of) addition and subtraction, we hypothesized that the core term contributing to the success of the b-vector is the multiplication operation. Therefore, we propose an approach using the concatenation of the speaker embedding, test utterance, and their element-wise multiplication. Experimental results show that by only adding element-wise multiplication, performance exceeds that of the b-vector (see Table 4, ‘concat&mul’).

Experiments in this study were conducted using Keras, a deep learning library in Python with Tensorflow back-end

We use VoxCeleb1 dataset which comprises approximately 330 hours of recordings from 1251 speakers in text-independent scenarios and has a number of comparable recent studies in the literature. All utterances are encoded at a 16 kHz sampling rate with 16-bit resolution. As the dataset comprises various utterances of celebrities from YouTube, it includes diverse background noise and varied durations. We followed the official guidelines which divide the dataset into training and evaluation sets of 1211 and 40 speakers respectively.

We didn’t apply any pre-processing, such as normalization, except pre-emphasis [30] to raw waveforms. For mini-batch construction, utterances were either cropped or duplicated into 59049 samples (≈3.59s) in the training phase, following [5, 7]. In the evaluation phase, no adjustments were made to length; the whole utterance was used.

, two leaky ReLU layers, and a max pooling layer as shown in Table 1. Residual connection adds the input of each residual block to the output of the second BN layer. A GRU layer with 1024 nodes aggregates frame-level embeddings into an utterance-level embedding. One fully-connected layer is used to extract speaker embeddings. The output layer has 1211 nodes, which represents the number of speakers in the training set. Back-end classifiers including b-vector, rb-vector, concat&mul comprise four fully-connected layers with 1024 nodes.

L2 regularization (weight decay) with a weight factor of 10−4 was applied to all layers. An AMSGrad optimizer with learning rate 10−3 with decay parameter 10−4 was used [32]. For center loss, λ=10−5 was used. Training was conducted using a mini-batch size of 102. Recurrent dropout at a rate of 0.3 was applied to the GRU layer [33].

Table 4 describes the performance of various back-end classifiers with the proposed RawNet speaker embeddings. In our experiments, PLDA did not show improved results compared to the baseline cosine similarity. On the other hand, DNN-based back-end classifiers demonstrated significant improvement, with an RER of 16 %. The rb-vector system did not show additional improvements above the b-vector system. Among DNN-based back-end classifiers, the proposed approach of using element-wise multiplication of speaker embeddings from enrol and test utterances performed best, with an EER of 4.0 %.

Recent studies using the VoxCeleb1 dataset are compared in Table 5. The first five rows depict systems that utilize data augmentation techniques. “Heavy” refers to the augmentation scheme of [24, 25], with various noise from the PRISM dataset and reverberations from the REVERB challenge dataset. “Light” refers to the scheme used in [21, 34] that doubles the size of the dataset using noise and reverberations. The i-vector system with PLDA back-end in two implementation versions (one from Nargrani et al. and the other from our implementation) demonstrates an EER of 8.8 % and 5.1 %, respectively. The x-vector system with PLDA back-end without data augmentation, as studied by Shon et al., demonstrates an EER of 7.1 %. The proposed RawNet system with concat&mul demonstrates the best performance among systems without data augmentation, exhibiting an EER of 4.0 %. The x-vector/PLDA system conducted by Okabe et al. [25] is the only system showing lower EER than our proposed system, but the former is subjected to intensive data augmentation, which hinders direct comparison.

In this paper, we propose an end-to-end speaker verification system using two DNNs, for extracting speaker embedding extraction and back-end classification. The proposed system has a simple, yet efficient, process pipeline where speaker embeddings are extracted directly from raw waveforms and verification results are directly shown using two DNNs. Various techniques that compose the proposed RawNet have been explored including the pre-training scheme and additional objective functions. RawNet with the concat&mul back-end classifier demonstrates an EER of 4.0 % on the VoxCeleb1 dataset, which is state-of-the-art among systems without data augmentation, including the x-vector system.

The proposed RawNet with concat&mul inputs raw waveforms and outputs verification results. Such a simplified process pipeline is expected to lower barriers to research and provide opportunities for many researchers to apply new techniques.