When a loan is approved for a person or company, the bank is subject to credit risk; the risk that the lender defaults. To mitigate this risk, a bank will require some form of security, which will be collected if the lender defaults. Accounts can be secured by several securities and a security can be used for several accounts. The goal is to fractionally assign the securities to the accounts so as to balance the risk. This situation can be modelled by a bipartite graph. We have a set S of securities and a set A of accounts. Each security has a value v_i and each account has an exposure e_j. If a security i can be used to secure an account j, we have an edge from i to j. Let f_ij be part of security i's value used to secure account j. We are searching for a maximum flow that send at most v_i units out of node i ∈ S and at most e_j units into node j ∈ A. Then s_j = e_j - ∑_i f_ij is the unsecured part of account j. We are searching for the maximum flow that minimizes ∑_j s_j^2/e_j. 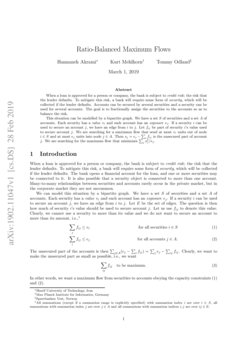 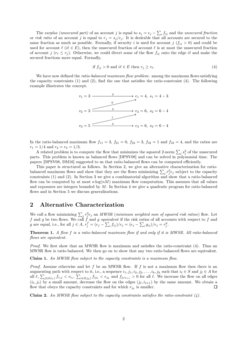 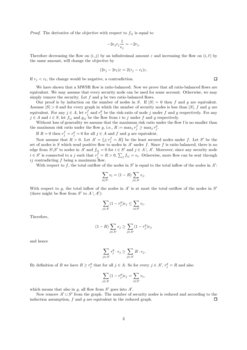 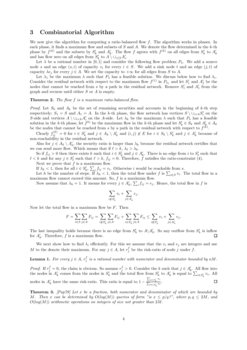 When a loan is approved for a person or company, the bank is subject to credit risk; the risk that the lender defaults. To mitigate this risk, a bank will require some form of security, which will be collected if the lender defaults. The bank opens a financial account for the loan, and one or more securities may be connected to it. It is also possible that a security object is connected to more than one account. Many-to-many relationships between securities and accounts rarely occur in the private market, but in the corporate market they are not uncommon.

In other words, we want a maximum flow from securities to accounts obeying the capacity constraints (1) and (2).

We have now defined the ratio-balanced maximum flow problem: among the maximum flows satisfying the capacity constraints (1) and (2), find the one that satisfies the ratio-constraint (4). The following example illustrates the concept.

A related problem is to compute the flow that minimizes the squared 2-norm ∑js2j of the unsecured parts. This problem is known as balanced flows [DPSV08] and can be solved in polynomial time. The papers [DPSV08, DM16] suggested to us that ratio-balanced flows can be computed efficiently.

We call a flow minimizing ∑jr2jej an MWSR (minimum weighted sum of squared risk ratios) flow. Let f and g be two flows. We call f and g equivalent if the risk ratios of all accounts with respect to f and g are equal, i.e., for all j∈A, rfj=(ej−∑ifij)/ej=(ej−∑igij)/ej=rgj.

An MWSR flow subject to the capacity constraints is a maximum flow.

Assume otherwise and let f be an MWSR flow. If f is not a maximum flow then there is an augmenting path with respect to it, i.e., a sequence i1,j1,i2,j2,…,ik,jk such that iℓ∈S and jℓ∈A for all ℓ, ∑j∈δ(i1)fi1j<vi1, ∑i∈δ(jk)fijk<ejk and fjℓiℓ+1>0 for all ℓ. We increase the flow on all edges (iℓ,jℓ) by a small amount, decrease the flow on the edges (jℓ,iℓ+1) by the same amount. We obtain a flow that obeys the capacity constraints and for which rjk is smaller. ∎

An MWSR flow subject to the capacity constraints satisfies the ratio-constraint (4).

If rj<rℓ, the change would be negative, a contradiction. ∎

Our proof is by induction on the number of nodes in S. If |S|=0 then f and g are equivalent. Assume |S|>0 and for every graph in which the number of security nodes is less than |S|, f and g are equivalent. For any j∈A, let rfj and rgj be the risk-ratio of node j under f and g respectively. For any j∈A and i∈S, let fij and gij be the flow from i to j under f and g respectively.

Now assume that R>0. Let A′={j;rfj=R} be the least secured nodes under f. Let S′ be the set of nodes is S which send positive flow to nodes in A′ under f. Since f is ratio-balanced, there is no edge from S∖S′ to nodes in A′ and fij=0 for i∈S′ and j∈A∖A′. Moreover, since any security node i∈S′ is connected to a j such that rfj=R>0, ∑jfij=vi. Otherwise, more flow can be sent through ij contradicting f being a maximum flow.

which means that also in g, all flow from S′ goes into A′.

Now remove A′∪S′ from the graph. The number of security nodes is reduced and according to the induction assumption, f and g are equivalent in the reduced graph. ∎

The flow f is a maximum ratio-balanced flow.

Also for j∈Ak∖A′k, the security ratio is larger than λk because the residual network certifies that we can send more flow. Which means that if ℓ>k, λℓ>λk.

Next we prove that f is a maximum flow.

If λk<1, then for all i∈S′k, ∑jfij=vi. Otherwise i would be reachable from s.

Now assume that λh=1. It means for every j∈A′h, ∑ifij=ej. Hence, the total flow in f is

Now let the total flow in a maximum flow be F. Then

The last inequality holds because there is no edge from S′h to A∖A′h. So any outflow from S′h is inflow for A′h. Therefore, f is a maximum flow. ∎

We next show how to find λi efficiently. For this we assume that the vi and ej are integers and use M to the denote their maximum. For any j∈A, let rfj be the risk-ratio of node j under f.

For every j∈A, rfj is a rational number with numerator and denominator bounded by nM.

If rfj=0, the claim is obvious. So assume rfj>0. Consider the k such that j∈A′k. All flow into the nodes in A′k comes from the nodes in S′k and the total flow from S′k to A′k is equal to ∑i∈S′kvi. All nodes in A′k have the same risk-ratio. This ratio is equal to 1−∑i∈S′kvi∑ℓ∈A′keℓ. ∎

[Pap79] Let x be a fraction, both numerator and denominator of which are bounded by M. Then x can be determined by O(log(M)) queries of form ”is x≤p/q?”, where p,q≤2M, and O(log(M)) arithmetic operations on integers of size not greater than 2M.

Instead of finding λi, we find 1−λi which is also a fraction with both numerator and denominator bounded by nM. In order to answer each query, we check if P1−p/q has a feasible solution or not. If it does, then λi≥1−p/q which means 1−λi≤p/q. Otherwise, λi>1−p/q or 1−λi>p/q.

We need to find at most n λ-values. For each one we need to answer log(nM) queries. Each query is a maxflow-computation.

Let the vi’s and ej’s be integer and let M be their maximum. A ratio-balanced flow can be computed with nlog(nM) maxflow-computations.

For balanced flows (definition given in the introduction), the number of maxflow-computations can be reduced to a single parameterized flow computation [DM16]. The same improvement might be possible here.

4 Solution by Formulation as a Quadratic Program

The task “minimize ∑jejr2j subject to (1) and (2)” is a quadratic program. As such it can be (approximately) solved by any QP-package, e.g., CVXOPT[cvx]. For concreteness, we give the formulation as a standard QP problem in the notation used in CVXOPT.

for the all-ones column vector and

^ej for the j-th unit vector. We number the edges of the graph arbitrarily and use x for the vector of flows. The matrices K and V connect the flow variables to the securities and accounts:

Figure 1 shows an example. We are now ready to formulate the objective function and the constraints as a QP.

In standard form, the exposure-weighted sum-of-squares error function can be written as follows:

The goal is to write ∑jejr2j in the form 12xTPx+qTx. To do so, we expand the square by writing

In matrix notation, the constraints are −Ix≤0 and Vx≤v and Kx≤e.

For the example in Figure 1, the CVXOPT package solves the QP in 10 milliseconds and the algorithm uses 5 iterations. The reported solution is

We discuss some extensions.

Limits to a Claim:

An account might contractually only have claim to parts of the security value. This is easily modeled by introducing an upper bound on the flow from a security to an account. The QP-algorithm and the combinatorial algorithm can handle such bounds.

Frederic Dorn (Sparebanken Vest) suggested the use of minimum cost flows for modeling the priorities in combination with the objective for a balanced flow. Let p=1,2,…,P be the priorities, let E(p) be the set of edges with priority p and ϵ a small number. Consider now the following optimization problem, which is a QP.

subject to f≥0 and (1) and (2). The first term in the objective sends as much flow as possible through the graph, but prioritizing first priority much stronger than second, the second much stronger than third, and so forth. The second term states that everything else being equal, a ratio-balanced flow is preferable.