In this paper, we consider a problem of failure prediction in the context of predictive maintenance applications. We present a new approach for rare failures prediction, based on a general methodology, which takes into account peculiar properties of technical systems. We illustrate the applicability of the method on the real-world test cases from aircraft operations. 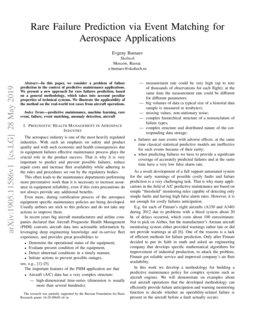 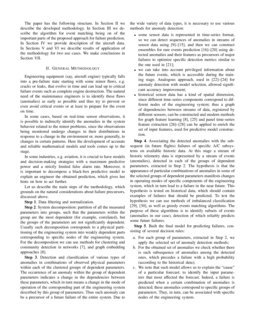 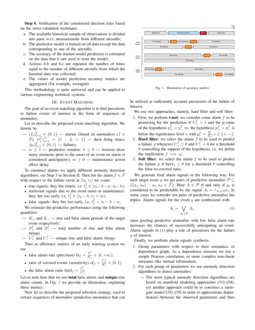 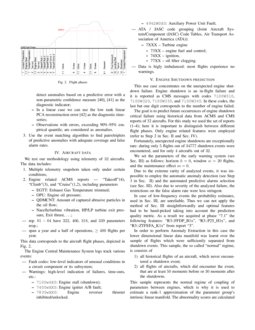 Railway points are among the key components of railway infrastructure. A...
Zhibin Li, et al. ∙

The aerospace industry is one of the most heavily regulated industries. With such an emphasis on safety and product quality and with such economic and health consequences due to equipment failures effective maintenance process plays the crucial role in the product success. That is why it is very important to predict and prevent possible failures, reduce repair costs and increase fleet availability while adhering to the rules and procedures set out by the regulatory bodies.

This often leads to the maintenance departments performing more preventative work than it is necessary to increase assurance in equipment reliability, even if this extra precautions do not always provide any additional benefits.

Even more, during certification process of the aerospace equipment specific maintenance policies are being developed. Usually airlines are stick to this policies and do not take any actions to improve them.

The important features of the PHM application are that

As a result development of a full support automated system for the early warnings of possible costly faults and failure prediction is a very challenging task. That is why many applications in the field of A/C predictive maintenance are based on simple “threshold” monitoring rules capable of detecting only simple faults and having high false alarm rates. However, it is not enough for costly failures anticipation.

E.g. for each of Finnair’s eight aircrafts (A330 and A340) during 2012 due to problems with a bleed system about 20 hr. of delays occurred, which costs about 100 euros/minute. Not to pick on Airbus, but the manufacturer’s Airman aircraft monitoring system either provided warnings rather late or did not provide warnings at all [6]. One of the reasons is a lack of efficient methods for failure prediction. Only after Finnair decided to put its faith in math and asked an engineering company that develops specific mathematical algorithms for improvement of industrial production, to attack the problem, Finnair got reliable service and improved company’s air fleet availability.

In this work we develop a methodology for building a predictive maintenance policy for complex systems such as aircraft engines. We will demonstrate on examples about real aircraft operations that the developed methodology can efficiently provide failure anticipation and warning monitoring function to decide whether an operability-related failure is present in the aircraft before a fault actually occurs.

Engineering equipment (say, aircraft engine) typically falls into a pre-failure state starting with some minor flaws, e.g. cracks or leaks, that evolve in time and can lead up to critical failure events such as complete engine destruction. The natural need of the maintenance engineers is to identify these flaws (anomalies) as early as possible and thus try to prevent or even avoid critical events or at least to prepare for the event on time.

In some cases, based on real-time sensor observations, it is possible to indirectly identify the anomalies in the system behavior related to the minor problems, since the observations being monitored undergo changes in their distributions in response to a change in the environment or, more generally, to changes in certain patterns. Here the development of accurate and reliable mathematical models and tools comes up to the stage.

In some industries, e.g. aviation, it is crucial to have models and decision-making strategies with a maximum predictive power and a strictly limited false alarm rate. Moreover, it is important to decompose a black-box predictive model to explain an engineer the obtained prediction, which gives her hints on how to act further.

Let us describe the main steps of the methodology, which grounds on the natural considerations about failure precursors, discussed above.

Step 2. System decomposition: partition of all the measured parameters into groups, such that the parameters within the group are the most dependent (for example, correlated), but the groups of the parameters are not significantly dependent. Usually such decomposition corresponds to a physical partitioning of the engineering system into weakly dependent parts corresponding to specific nodes of the engineering system. For the decomposition we can use methods for clustering and community detection in networks [7], and graph embedding approaches [8].

Step 3. Detection and classification of various types of anomalies in combinations of observed physical parameters within each of the clustered groups of dependent parameters. The occurrence of an anomaly within the group of dependent parameters indicates a change in the dependencies between these parameters, which in turn means a change in the mode of operation of the corresponding part of the engineering system described by this group of parameters. Thus such anomaly can be a precursor of a future failure of the entire system. Due to the wide variety of data types, it is necessary to use various methods for anomaly detection:

Step 4. Associating the detected anomalies with the subsequent (in future flights) failures of specific A/C subsystems on available historic data. At this stage a stream of historic telemetry data is represented by a stream of events (anomalies), detected in each of the groups of dependent parameters, extracted in Step 2. The hypothesis is that the appearance of particular combinations of anomalies in some of the selected groups of dependent parameters manifests changes in operating modes of specific components of the engineering system, which in turn lead to a failure in the near future. This hypothesis is tested on historical data, which should contain examples of failures that should be predicted. To test the hypothesis we can use methods of imbalanced classification [29, 30], as well as greedy events matching algorithms. The purpose of these algorithms is to identify subsets of events (anomalies in our case), detection of which reliably predicts some future failures.

Step 6. Verification of the constructed decision rules based on the cross-validation technique:

This methodology is quite universal and can be applied to various engineering technical systems.

The goal of an event matching algorihm is to find precursors to failure events of interest in the form of sequences of anomalies.

Let us describe the proposed event matching algorithm. We denote by

To construct alarms we apply different anomaly detection algorithms, see Step 3 in Section II. Then for the alarm f∈F with respect to the failure event in [τ0,τ1) we count

We estimate the predictive performance using the following quantities:

Thus as efficiency metrics of an early warning system we use

Let us note here that we use total false alarm, and unique true alarm counts. In Fig. 1 we provide an illustration, explaning these metrics.

Now let us describe the proposed selection strategy, used to extract sequences of anomalies (predictive anomalies) that can be utilized as sufficiently accurate precursors of the failure of interest.

We use two approaches, namely, hard filter and soft filter:

since pooling predictive anomalies with low false alarm rate increases the chances of successfully anticipating an event. Alarm signals in (1) play a role of precursors for the failure y of interest.

We test our methodology using telemetry of 32 aircrafts. The data includes:

This data corresponds to the aircraft flight phases, depicted in Fig. 2.

This use case concentrates on the unexpected engine shutdown failure. Engine shutdown is an in-flight failure and it is reported as CMS messages with codes 7100W310, 7100W320, 7100W330, and 7100W340. In these codes, the last but one digit corresponds to the number of engine failed.

The goal is to predict future occurrences of engine shutdown critical failure using historical data from ACMS and CMS reports of 32 aircrafts. For this study we used the set of reports (1–4); here it is important to distinguish between different flight phases. Only engine related features were employed (refer to Step 2 in Sec. II and Sec. IV).

Fortunately, unexpected engine shutdowns are exceptionally rare: during only 5 flights out of 34777 shutdown events were encountered, and for only 4 aircrafts out of 32.

Due to the extreme rarity of analyzed events, it was impossible to employ the automatic anomaly detection (see Step 3 in Sec.  II) and the automated predictive alarms selection (see Sec. III). Also due to severity of the analyzed failure, the restrictions on the false alarm rate were less stringent.

In case of low-frequency events the probability estimates, used in Sec. III, are unreliable. Thus we can not apply the method of Sec. III straightforwardly and optimal features had to be hand-picked taking into account the prediction quality metric. As a result we acquired at phase “7.1” the following features: “R3::FFDP_B1x”, “R3::P25_H1x”, and “R3::ZTFEFA_K1x” from report “3”.

In order to perform Anomaly Extraction in this case the lower dimensional linear data manifold was learnt over the sample of flights which were sufficiently separated from shutdown events. This sample, the so called “normal” regime, is consists of

This sample represents the normal regime of coupling of parameters between engines, which is why it is used to estimate a rank-1 approximation of the parameter group’s intrinsic linear manifold. The abnormality scores are calculated as reconstruction error of the recorded within group measurements of the complete sample of flights of all aircrafts, see Figure 3.

The threshold for the abnormality score in a certain parameter group is based on a mix of {95%,99%} empirical quantiles, obtained via manual search and optimization process (see Tab. I and Figure 4).

We considered a subset of 10 parameters (that could be the most relevant to the failure) and applied the automatic parameter selection methodology together with the imbalanced classification [30, 29]. The successive elimination of parameters finally left only several parameters, including OPU (Oil pressure) etc., which occurred to be the most related to the failure.

At the next step we divided the data into the train/test sets and applied the failure prediction procedure that accounts for the autoregression depth of parameters values used when making predictions; we tune the depth values based on the prediction error. It occurred that the history up to 3 flights back provides the most accurate predictions.

In practice the prediction of a failure in the vicinity of a real one is also acceptable and not considered as false alarm. The results for failures predicted in the range of ±2 flights near the real faults are presented in Figure 7.

The particular predictions in time for the classifier confidence threshold

In this paper we proposed a data-driven approach to the rare failure prediction problem. Thanks to the elaborated approach we were able to predict some possible aircraft equipment failures. The next steps would be to automate the methodology, as it still requires a manual choice of some hyperparameters (various thresholds), as well as to consider more use cases to expand the proposed methodology.

E. Burnaev would like to thank I. Nazarov and P. Erofeev for a help with data processing, and company Datadavnce llc. for the problem statement.