In this paper we introduce RankPL, a modeling language that can be thought of as a qualitative variant of a probabilistic programming language with a semantics based on Spohn's ranking theory. Broadly speaking, RankPL can be used to represent and reason about processes that exhibit uncertainty expressible by distinguishing "normal" from" surprising" events. RankPL allows (iterated) revision of rankings over alternative program states and supports various types of reasoning, including abduction and causal inference. We present the language, its denotational semantics, and a number of practical examples. We also discuss an implementation of RankPL that is available for download. 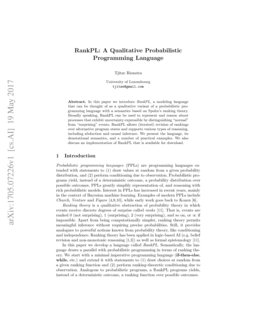 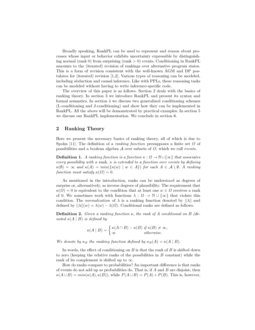 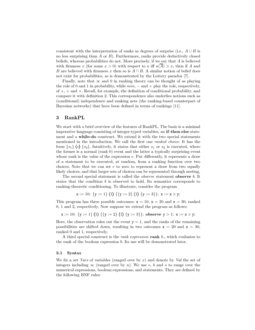 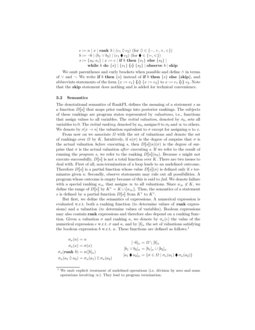 Budge: a programming language and a theorem prover

The combined approach of the Qualitative Reasoning and Probabilistic Fun...
P. A. Wałȩga, et al. ∙

Causal inference can be formalized as Bayesian inference that combines a...
Sam Witty, et al. ∙

Since the advent of LISP, the fifth generation programming language has ...
Han Jipeng, et al. ∙

Compositional semantics for new paradigms: probabilistic, hybrid and beyond

(PPLs) are programming languages extended with statements to (1) draw values at random from a given probability distribution, and (2) perform conditioning due to observation. Probabilistic programs yield, instead of a deterministic outcome, a probability distribution over possible outcomes. PPLs greatly simplify representation of, and reasoning with rich probabilistic models. Interest in PPLs has increased in recent years, mainly in the context of Bayesian machine learning. Examples of modern PPLs include

ranks [DBLP:books/daglib/0035277]. That is, events are ranked 0 (not surprising), 1 (surprising), 2 (very surprising), and so on, or ∞ if impossible. Apart from being computationally simpler, ranking theory permits meaningful inference without requiring precise probabilities. Still, it provides analogues to powerful notions known from probability theory, like conditioning and independence. Ranking theory has been applied in logic-based AI (e.g. belief revision and non-monotonic reasoning [DBLP:dblp_journals/ai/DarwicheP97, goldszmidt1996qualitative]) as well as formal epistemology [DBLP:books/daglib/0035277].

In this paper we develop a language called RankPL. Semantically, the language draws a parallel with probabilistic programming in terms of ranking theory. We start with a minimal imperative programming language (if-then-else, while, etc.) and extend it with statements to (1) draw choices at random from a given ranking function and (2) perform ranking-theoretic conditioning due to observation. Analogous to probabilistic programs, a RankPL programs yields, instead of a deterministic outcome, a ranking function over possible outcomes.

Broadly speaking, RankPL can be used to represent and reason about processes whose input or behavior exhibits uncertainty expressible by distinguishing normal (rank 0) from surprising (rank >0) events. Conditioning in RankPL amounts to the (iterated) revision of rankings over alternative program states. This is a form of revision consistent with the well-known AGM and DP postulates for (iterated) revision [DBLP:dblp_journals/ai/DarwicheP97, Gardenfors:1995:BR:216136.216138]. Various types of reasoning can be modeled, including abduction and causal inference. Like with PPLs, these reasoning tasks can be modeled without having to write inference-specific code.

Here we present the necessary basics of ranking theory, all of which is due to Spohn [DBLP:books/daglib/0035277]. The definition of a ranking function presupposes a finite set Ω of possibilities and a boolean algebra A over subsets of Ω, which we call events.

As mentioned in the introduction, ranks can be understood as degrees of surprise or, alternatively, as inverse degrees of plausibility. The requirement that κ(Ω)=0 is equivalent to the condition that at least one w∈Ω receives a rank of 0. We sometimes work with functions λ:Ω→N∪{∞} that violate this condition. The normalization of λ is a ranking function denoted by ||λ|| and defined by ||λ||(w)=λ(w)−λ(Ω). Conditional ranks are defined as follows.

Given a ranking function κ, the rank of A conditional on B (denoted κ(A∣B) is defined by

We denote by κB the ranking function defined by κB(A)=κ(A∣B).

In words, the effect of conditioning on B is that the rank of B is shifted down to zero (keeping the relative ranks of the possibilities in B constant) while the rank of its complement is shifted up to ∞.

How do ranks compare to probabilities? An important difference is that ranks of events do not add up as probabilities do. That is, if A and B are disjoint, then κ(A∪B)=min(κ(A),κ(B)), while P(A∪B)=P(A)+P(B). This is, however, consistent with the interpretation of ranks as degrees of surprise (i.e., A∪B is no less surprising than A or B). Furthermore, ranks provide deductively closed beliefs, whereas probabilities do not. More precisely, if we say that A is believed with firmness x (for some x>0) with respect to κ iff κ(¯¯¯¯A)>x, then if A and B are believed with firmness x then so is A∩B. A similar notion of belief does not exist for probabilities, as is demonstrated by the Lottery paradox [kyburg1961probability].

Finally, note that ∞ and 0 in ranking theory can be thought of as playing the role of 0 and 1 in probability, while min, − and + play the role, respectively, of +, ÷ and ×. Recall, for example, the definition of conditional probability, and compare it with definition 2

. This correspondence also underlies notions such as (conditional) independence and ranking nets (the ranking-based counterpart of Bayesian networks) that have been defined in terms of rankings

We start with a brief overview of the features of RankPL. The basis is a minimal imperative language consisting of integer-typed variables, an if-then-else statement and a while-do construct. We extend it with the two special statements mentioned in the introduction. We call the first one ranked choice. It has the form {s1}⟨e⟩{s2}. Intuitively, it states that either s1 or s2 is executed, where the former is a normal (rank 0) event and the latter a typically surprising event whose rank is the value of the expression e. Put differently, it represents a draw of a statement to be executed, at random, from a ranking function over two choices. Note that we can set e to zero to represent a draw from two equally likely choices, and that larger sets of choices can be represented through nesting.

The second special statement is called the observe statement observe b. It states that the condition b is observed to hold. Its semantics corresponds to ranking-theoretic conditioning. To illustrate, consider the program

This program has three possible outcomes: x=10, x=20 and x=30, ranked 0, 1 and 2, respectively. Now suppose we extend the program as follows:

Here, the observation rules out the event y=1, and the ranks of the remaining possibilities are shifted down, resulting in two outcomes x=20 and x=30, ranked 0 and 1, respectively.

A third special construct is the rank expression rank b., which evaluates to the rank of the boolean expression b. Its use will be demonstrated later.

We omit parentheses and curly brackets when possible and define ∧ in terms of ∨ and ¬. We write if b then {s} instead of if b then {s} else {skip}, and abbreviate statements of the form {x:=e1}⟨e⟩{x:=e2} to x:=e1⟨e⟩e2. Note that the skip statement does nothing and is added for technical convenience.

The denotational semantics of RankPL defines the meaning of a statement s as a function D⟦s⟧ that maps prior rankings into posterior rankings. The subjects of these rankings are program states represented by valuations, i.e., functions that assign values to all variables. The initial valuation, denoted by σ0, sets all variables to 0. The initial ranking, denoted by κ0, assigns 0 to σ0 and ∞ to others. We denote by σ[x→n] the valuation equivalent to σ except for assigning n to x.

From now on we associate Ω with the set of valuations and denote the set of rankings over Ω by K. Intuitively, if κ(σ) is the degree of surprise that σ is the actual valuation before executing s, then D⟦s⟧(κ)(σ) is the degree of surprise that σ is the actual valuation after executing s. If we refer to the result of running the program s, we refer to the ranking D⟦s⟧(κ0). Because s might not execute successfully, D⟦s⟧ is not a total function over K. There are two issues to deal with. First of all, non-termination of a loop leads to an undefined outcome. Therefore D⟦s⟧ is a partial function whose value D⟦s⟧(κ) is defined only if s terminates given κ. Secondly, observe statements may rule out all possibilities. A program whose outcome is empty because of this is said to fail. We denote failure with a special ranking κ∞ that assigns ∞ to all valuations. Since κ∞∉K, we define the range of D⟦s⟧ by K∗=K∪{κ∞}. Thus, the semantics of a statement s is defined by a partial function D⟦s⟧ from K∗ to K∗.

But first, we define the semantics of expressions. A numerical expression is evaluated w.r.t. both a ranking function (to determine values of rank expressions) and a valuation (to determine values of variables). Boolean expressions may also contain rank expressions and therefore also depend on a ranking function. Given a valuation σ and ranking κ, we denote by σκ(e) the value of the numerical expression e w.r.t. σ and κ, and by [b]κ the set of valuations satisfying the boolean expression b w.r.t. κ. These functions are defined as follows.111We omit explicit treatment of undefined operations (i.e. division by zero and some operations involving ∞). They lead to program termination.

Given a boolean expression b we will write κ(b) as shorthand for κ([b]κ) and κb as shorthand for κ[b]κ. We are now ready to define the semantics of statements. It is captured by seven rules, numbered D1 to D7. The first deals with the skip statement, which does nothing and therefore maps to the identity function.

The rank of a valuation σ after executing an assignment x:=e is the minimum of all ranks of valuations that equal σ after assigning the value of e to x.

To execute if b then {s1} else {s2} we first execute s1 and s2 conditional on b and ¬b, yielding the rankings D⟦s1⟧(κb) and D⟦s2⟧(κ¬b). These are adjusted by adding the prior ranks of b and ¬b and combined by taking the minimum of the two. The result is normalized to account for the case where one branch fails.

Given a prior κ, the rank of a valuation after executing s1⟨e⟩s2 is the minimum of the ranks assigned by D⟦s1⟧(κ) and D⟦s2⟧(κ), where the latter is increased by e. The result is normalized to account for the case where one branch fails.

The semantics of observe b corresponds to conditioning on the set of valuations satisfying b, unless the rank of this set is ∞ or the prior ranking equals κ∞.

Some remarks. Firstly, the semantics of RankPL can be thought of as a ranking-based variation of the Kozen’s semantics of probabistic programs [DBLP:journals/jcss/Kozen81] (i.e., replacing × with + and + with min). Secondly, a RankPL implementation does not need to compute complete rankings. Our implementation discussed in section LABEL:sec:implementation follows a most-plausible-first execution strategy: different alternatives are explored in ascending order w.r.t. rank, and higher-ranked alternatives need not be explored if knowing the lowest-ranked outcomes is enough, as is often the case.

Consider the two-bit full adder circuit shown in figure LABEL:fig:adder. It contains two XOR gates X1,X2, two AND gates A1,A2 and an OR gate O1. The function of this circuit is to generate a binary representation (b1,b2) of the number of inputs among a1, a2, a3 that are high. The circuit diagnosis problem is about explaining observed incorrect behavior by finding minimal sets of gates that, if faulty, cause this behavior.222See Halpern [DBLP:books/daglib/0014219, Chapter 9] for a similar treatment of this example.