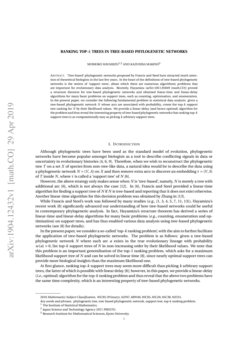 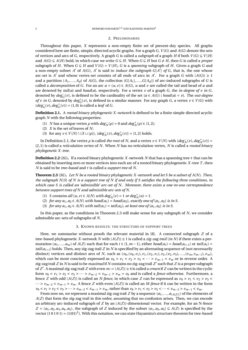 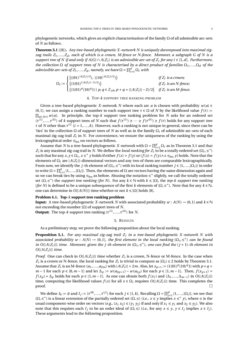 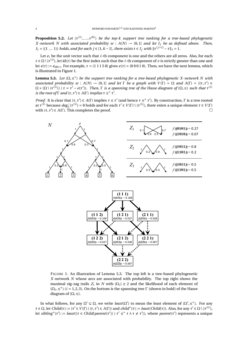 Attempting to recognize a tree inside a phylogenetic network is a fundam...
Momoko Hayamizu, et al. ∙

Attempting to recognize a tree inside a network is a fundamental underta...
Momoko Hayamizu, et al. ∙

In this second paper, we look at the following question: are the propert...
Maurice Margenstern, et al. ∙

Suffix trees are a fundamental data structure in stringology, but their ...
Manuel Cáceres, et al. ∙

The concept of median/consensus has been widely investigated in order to...
Morgane Goibert, et al. ∙

Although phylogenetic trees have been used as the standard model of evolution, phylogenetic networks have become popular amongst biologists as a tool to describe conflicting signals in data or uncertainty in evolutionary histories [4, 6, 9]. Therefore, when we wish to reconstruct the phylogenetic tree T on a set X of species from non-tree-like data, a natural idea would be to describe the data using a phylogenetic network N=(V,A) on X and then remove extra arcs to discover an embedding τ=(V,S) of T inside N, where τ is called a ‘support tree’ of N [6].

However, the above strategy only makes sense when N is ‘tree-based’, namely, N is merely a tree with additional arc [6], which is not always the case [12]. In [6], Francis and Steel provided a linear-time algorithm for finding a support tree of N if N is tree-based and reporting that it does not exist otherwise. Another linear-time algorithm for this decision problem was obtained by Zhang in [13].

While Francis and Steel’s work was followed by many studies (e.g., [1, 3, 4, 5, 7, 11, 13]), Hayamizu’s recent work [8] significantly advanced our understanding of how tree-based networks could be useful in contemporary phylogenetic analysis. In fact, Hayamizu’s structure theorem has derived a series of linear-time and linear-delay algorithms for many basic problems (e.g., counting, enumeration and optimisation) on support trees, and has thus enabled various data analysis using tree-based phylogenetic networks (see [8] for details).

In the present paper, we consider a so-called ‘top-k ranking problem’, with the aim to further facilitate the application of tree-based phylogenetic networks. The problem is as follows: given a tree-based phylogenetic network N where each arc a exists in the true evolutionary lineage with probability w(a)>0, list top-k support trees of N in non-increasing order by their likelihood values. We note that this problem is an important generalisation of the top-1 ranking problem, which asks for a maximum likelihood support tree of N and can be solved in linear time [8], since nearly optimal support trees can provide more biological insights than the maximum likelihood one.

At first glance, ranking top-k support trees may seem more difficult than picking k arbitrary support trees, the latter of which is possible with linear delay [8]; however, in this paper, we provide a linear-delay (i.e., optimal) algorithm for the top-k ranking problem and thus reveal that the above two problems have the same time complexity, which is an interesting property of tree-based phylogenetic networks.

Throughout this paper, X represents a non-empty finite set of present-day species. All graphs considered here are finite, simple, directed acyclic graphs. For a graph G, V(G) and A(G) denote the sets of vertices and arcs of G, respectively. A graph G is called a subgraph of a graph H if both V(G)⊆V(H) and A(G)⊆A(H) hold, in which case we write G⊆H. When G⊆H but G≠H, then G is called a proper subgraph of H. When G⊆H and V(G)=V(H), G is a spanning subgraph of H. Given a graph G and a non-empty subset A′ of A(G), A′ is said to induce the subgraph G[A′] of G, that is, the one whose arc-set is A′ and whose vertex-set consists of all ends of arcs in A′. For a graph G with |A(G)|≥1 and a partition {A1,…,Ad} of A(G), the collection {G[A1],…,G[Ad]} of arc-induced subgraphs of G is called a decomposition of G. For an arc a=(u,v)∈A(G), u and v are called the tail and head of a and are denoted by tail(a) and head(a), respectively. For a vertex v of a graph G, the in-degree of v in G, denoted by deg−G(v), is defined to be the cardinality of the set {a∈A(G)∣head(a)=v}. The out-degree of v in G, denoted by deg+G(v), is defined in a similar manner. For any graph G, a vertex v∈V(G) with (deg−G(v),deg+G(v))=(1,0) is called a leaf of G.

A rooted binary phylogenetic X-network is defined to be a finite simple directed acyclic graph N with the following properties:

Let N be a rooted binary phylogenetic X-network and let S be a subset of A(N). Then, the subgraph N[S] of N is a support tree of N if and only if S satisfies the following three conditions, in which case S is called an ‘admissible’ arc-set of N. Moreover, there exists a one-to-one correspondence between support trees of N and admissible arc-sets of N.

In this paper, as the conditions in Theorem 2.3 still make sense for any subgraph of N, we consider admissible arc-sets of subgraphs of N.

From now on, we represent a maximal zig-zag trail Z by a sequence ⟨a1,…,a|A(Z)|⟩ of the elements of A(Z) that form the zig-zag trail in this order, assuming that no confusion arises. Then, we can encode an arbitrary arc-induced subgraph of Z by an |A(Z)|

-dimensional vector. For example, for an N-fence

Z=⟨a1,a2,a3,a4,a5⟩, the subgraph of Z induced by the subset {a1,a3,a5}⊆A(Z) is specified by the vector (10101)=(1(01)2). With this notation, we can state Hayamizu’s structure theorem for tree-based phylogenetic networks, which gives an explicit characterisation of the family Ω of all admissible arc-sets of N as follows.

Any tree-based phylogenetic X-network N is uniquely decomposed into maximal zig-zag trails Z1,…,Zd, each of which is a crown, M-fence or N-fence. Moreover, a subgraph G of N is a support tree of N if and only if A(G)∩A(Zi) is an admissible arc-set of Zi for any i∈[1,d]. Furthermore, the collection Ω of support trees of N is characterised by a direct product of families Ω1,…,Ωd of the admissible arc-sets of Z1,…,Zd, namely, we have Ω=∏di=1Ωi with

Given a tree-based phylogenetic X-network N where each arc a is chosen with probability w(a)∈(0,1], we can assign a ranking number to each support tree τ∈Ω of N by the likelihood value f(τ):=∏a∈A(τ)w(a). In principle, the top-k support tree ranking problem for N asks for an ordered set ⟨τ(1),…,τ(k)⟩ of k support trees of N such that f(τ(1))≥⋯≥f(τ(k))≥f(τ) holds for any support tree τ of N other than τ(i) (i=1,…,k). However, such a ranking is not unique in general, since there can be ‘ties’ in the collection Ω of support trees of N as well as in the family Ωi of admissible arc-sets of each maximal zig-zag trail Zi in N. For convenience, we ensure the uniqueness of the ranking by using the lexicographical order ≤lex on vectors as follows.

Assume that N is a tree-based phylogenetic X-network with Ω=∏di=1Ωi as in Theorem 3.1 and that Zi is any maximal zig-zag trail in N. We define the local ranking for Zi to be a totally ordered set (Ωi,≤∗) such that for any x,y∈Ωi, x≤∗y holds if either f(x)>f(y) or (f(x)=f(y)∧x≤lexy) holds. Note that the elements of Ωi are |A(Zi)|-dimensional vectors and any two of them are comparable lexicographically. From now, we identify the j-th element of (Ωi,≤∗) with its local ranking number j∈{1,…,|Ωi|} in order to write Ω=∏di=1{1,…,|Ωi|}. Then, the elements of Ω are vectors having the same dimension again and so we can break ties by using ≤lex as before. Abusing the notation ≤∗ slightly, we call the totally ordered set (Ω,≤∗) the support tree ranking (for N). For any k∈N with k≤|Ω|, the top-k support tree ranking (for N) is defined to be a unique subsequence of the first k elements of (Ω,≤∗). Note that for any k∈N, one can determine in O(|A(N)|) time whether or not k≤|Ω| holds [8].

As a preliminary step, we prove the following proposition about the local ranking.

Let Γ be the graph as in Lemma 5.3 and let Qj be a subset of V(Γ) that is recursively defined by

From Equation (1) and P1=Q1, the desired conclusion follows. ∎

We are in a position to give an algorithm for Problem 4.1. As illustrated in Table 1, the algorithm starts by setting j:=1 and Q1:={τ(1)} and then returns τ(j)=least(Qj) for each j∈[1,k], where Qj is iteratively updated using Equation (1).

In order to analyse the running time of the above algorithm, let us review some basics of a priority queue, which is a data structure for maintaining objects that are prioritised by their associated values. In its most basic form, a priority queue supports the operations called Insert and Delete-min, where the former refers to adding a new object, and the latter to detecting and deleting the one with the highest-priority [2]. Implemented with a binary heap, each of these operations can be performed in O(logn) time, where n denotes the number of the elements in the priority queue [2].

The top-k support tree ranking problem (Problem 4.1) can be solved with linear delay, and hence in O(k|A(N)|) time.

Finally, we make two remarks. First, Ω(k|A(N)|) time is required to output k distinct support trees of N as each support tree has size Ω(|A(N)|). Therefore, the running time of our algorithm (as well as that of the enumeration algorithm in [8]) is Θ(k|A(N)|), which guarantees the optimality of those algorithms. Second, as commonly in the literature (e.g., [10]), it would be natural to wonder about the time complexity of an analogue of Problem 4.1 that only asks for outputting a sequence of the differences between τ(j−1) and τ(j); however, we note that this problem still requires Ω(k|A(N)|) time because the size of each difference is Ω(|A(N)|). To illustrate this, consider a tree-based phylogenetic X-network N that is decomposed into maximal fences, each of which has only one admissible arc-set, and c crowns, each of which has size Ω(|A(N)|/c). The difference between any two support trees has size Ω(|A(N)|/c), which equals Ω(|A(N)|) if c is a constant.