The main result of the paper is the first polynomial-time algorithm for ranking bracelets. The time-complexity of the algorithm is O(k^2 n^4), where k is the size of the alphabet and n is the length of the considered bracelets. The key part of the algorithm is to compute the rank of any word with respect to the set of bracelets by finding three other ranks: the rank over all necklaces, the rank over palindromic necklaces, and the rank over enclosing apalindromic necklaces. The last two concepts are introduced in this paper. These ranks are key components to our algorithm in order to decompose the problem into parts. Additionally, this ranking procedure is used to build a polynomial-time unranking algorithm. 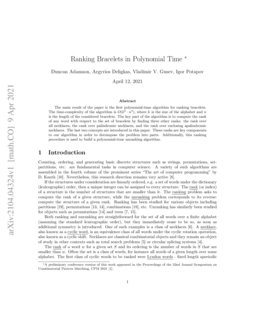 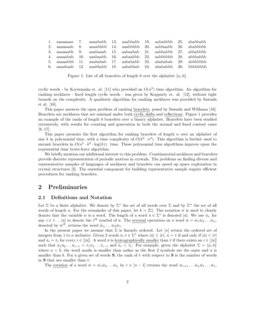 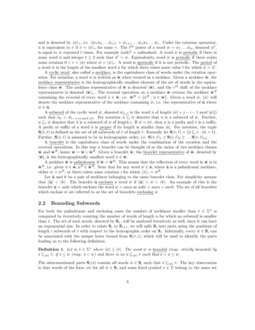 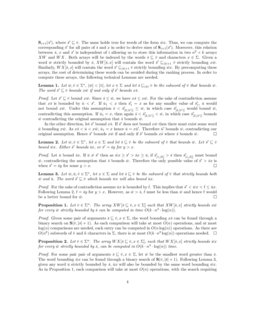 Counting, ordering, and generating basic discrete structures such as strings, permutations, set-partitions, etc. are fundamental tasks in computer science. A variety of such algorithms are assembled in the fourth volume of the prominent series “The art of computer programming” by D. Knuth [Knuth4a]. Nevertheless, this research direction remains very active [Mutze20].

If the structures under consideration are linearly ordered, e.g. a set of words under the dictionary (lexicographic) order, then a unique integer can be assigned to every structure. The rank (or index) of a structure is the number of structures that are smaller than it. The ranking problem asks to compute the rank of a given structure, while the unranking problem corresponds to its reverse: compute the structure of a given rank. Ranking has been studied for various objects including partitions [RankPartition], permutations [RankPerm1, RankPerm2], combinations [RankComb], etc. Unranking has similarly been studied for objects such as permutations [RankPerm2] and trees [Gupta1983, Pallo1986].

Both ranking and unranking are straightforward for the set of all words over a finite alphabet (assuming the standard lexicographic order), but they immediately cease to be so, as soon as additional symmetry is introduced. One of such examples is a class of necklaces [Graham1994]. A necklace, also known as a cyclic word, is an equivalence class of all words under the cyclic rotation operation, also known as a cyclic shift. Necklaces are classical combinatorial objects and they remain an object of study in other contexts such as total search problems [SplitNeck19] or circular splicing systems [CircularSplicing].

The rank of a word w for a given set S and its ordering is the number of words in S that are smaller than w. Often the set is a class of words, for instance all words of a given length over some alphabet. The first class of cyclic words to be ranked were Lyndon words - fixed length aperiodic cyclic words - by Kociumaka et. al. [Kociumaka2014] who provided an O(n3) time algorithm. An algorithm for ranking necklaces - fixed length cyclic words - was given by Kopparty et. al. [Kopparty2016], without tight bounds on the complexity. A quadratic algorithm for ranking necklaces was provided by Sawada et al. [Sawada2017].

This paper answers the open problem of ranking bracelets, posed by Sawada and Williams [Sawada2017]. Bracelets are necklaces that are minimal under both cyclic shifts and reflections. Figure 1 provides an example of the ranks of length 8 bracelets over a binary alphabet. Bracelets have been studied extensively, with results for counting and generation in both the normal and fixed content cases [Karim2013, Sawada2001].

This paper presents the first algorithm for ranking bracelets of length n over an alphabet of size k in polynomial time, with a time complexity of O(k2⋅n4). This algorithm is further used to unrank bracelets in O(n5⋅k2⋅log(k)). time. These polynomial time algorithms improve upon the exponential time brute-force algorithm.

Let Σ be a finite alphabet. We denote by Σ∗ the set of all words over Σ and by Σn the set of all words of length n. For the remainder of this paper, let k=|Σ|. The notation ¯w is used to clearly denote that the variable w is a word. The length of a word ¯u∈Σ∗ is denoted |¯u|. We use ¯ui, for any i∈1…|¯u| to denote the ith symbol of ¯u. The reversal operation on a word ¯w=¯w1¯w2…¯wn, denoted by ¯wR, returns the word ¯wn…¯w2¯w1.

A bracelet is the equivalence class of words under the combination of the rotation and the reversal operations. In this way a bracelet can be thought of as the union of two necklace classes ~w and ~wR, hence ^w=~w∪~wR. Given a bracelet ^w, the bracelet representative of ^w, denoted by [^w], is the lexicographically smallest word ¯u∈^w.

A necklace ~w is palindromic if ~w=~wR. This means that the reflection of every word in ~w is in ~wR, i.e. given ¯u∈~w,¯uR∈~wR. Note that for any word ¯w∈~a, where ~a is a palindromic necklace, either ¯w=¯wR, or there exists some rotation i for which ⟨¯w⟩i=¯wR.

Let ~u and ~v be a pair of necklaces belonging to the same bracelet class. For simplicity assume that ⟨~u⟩<⟨~v⟩. The bracelet ^u encloses a word ¯w if ⟨~u⟩<¯w<⟨~v⟩. An example of this is the bracelet ^u=aabc which encloses the word ¯w=aaca as aabc<aaca<aacb. The set of all bracelets which enclose ¯w are referred to as the set of bracelets enclosing ¯w.

For both the palindromic and enclosing cases the number of necklaces smaller than ¯v∈Σn is computed by iteratively counting the number of words of length n for which no subword is smaller than ¯v. The set of such words, denoted by Sn, will be analysed iteratively as well, since it can have an exponential size. In order to relate Si to Si+1, we will split Si into parts using the positions of length i subwords of ¯v with respect to the lexicographic order on Si. Informally, every ¯w∈Si can be associated with the unique lower bound from S(¯v,i), which will be used to identify the parts leading us to the following definition.

The aforementioned parts Si(¯s) contain all words ¯w∈Si such that ¯s⊑|¯w|¯v. The key observation is that words of the form x¯w for all ¯w∈Si and some fixed symbol x∈Σ belong to the same set Si+1(¯s′), where ¯s′⊑¯v. The same holds true for words of the form ¯wx. Thus, we can compute the corresponding ¯s′ for all pairs of ¯s and x in order to derive sizes of Si+1(¯s′). Moreover, this relation between ¯s, x and ¯s′ is independent of i allowing us to store this information in two n2×k arrays XW and WX. Both arrays will be indexed by the words ¯s⊑¯v and characters x∈Σ. Given a word ¯w strictly bounded by ¯s, XW[¯s,x] will contain the word ¯s′⊑|¯s|+1¯v strictly bounding x¯w. Similarly, WX[¯s,x] will contain the word ¯s′⊑|¯s|+1¯v strictly bounding ¯wx. By precomputing these arrays, the cost of determining these words can be avoided during the ranking process. In order to compute these arrays, the following technical Lemmas are needed.

Given some pair of arguments ¯s⊑¯v,x∈Σ, the word bounding x¯s can be found through a binary search on S(¯v,|¯s|+1). As each comparison will take at most O(n) operations, and at most log(n) comparisons are needed, each entry can be computed in O(nlog(n)) operations. As there are O(n2) subwords of ¯v and k characters in Σ, there is at most O(k⋅n3log(n)) operations needed. ∎

For some pair pair of arguments ¯s⊑¯v,x∈Σ, let ¯w be the smallest word greater than ¯s. The word bounding ¯wx can be found through a binary search of S(¯v,|¯s|+1). Following Lemma 3, given any word ¯u strictly bounded by ¯s, ¯ux will also be bounded by the same word bounding ¯wx. As in Proposition 1, each comparison will take at most O(n) operations, with the search requiring at most log(n) comparisons. As there are n2⋅k arguments, at most O(k⋅n3log(n)) operations are needed to compute every value of WX. ∎

Given a word ¯v∈Σn, the rank of ¯v with respect to the set of bracelets of length n over the alphabet Σ, RB(¯v), can be computed in O(k⋅n4) time.

This complexity bound is a significant improvement over the naive method of enumerating all bracelets, requiring exponential time in the worst case. New intuition is provided to rank the palindromic and enclosing cases. The main source of complexity for the problem of ranking comes from having to consider the lexicographic order of the word under reflection. New combinatorial results and algorithms are needed to count the bracelets in these cases.

The zth bracelet of length n over Σ can be computed in O(n5⋅k2⋅log(k)).

The unranking process is done through a binary search using the ranking algorithm as a black box. Let ¯α be a word which is the bracelet representation of the zth bracelet. The value of ¯α is determined iteratively, starting with the first symbol and working forwards. The first symbol of ¯α is determined preforming a binary search over ¯α. For x∈¯α, the words x1n−1 and xkn−1 are generated, where 1 is the smallest symbol in Σ and k the largest. If RB(x1n−1)≤z≤RB(xkn−1), then the first symbol of ¯α is x, otherwise the new value of x is chosen by standard binary search, being greater than x if z>RB(xkn−1) and less than x if z<RB(x1n−1). The ith symbol of ¯α is done in a similar manner, generating the words ¯α[1,i−1]x1n−i−1 and ¯α[1,i−1]xkn−i−1, converting ¯α[1,i−1]x1n−i−1 to a necklace representation using Algorithm 1 due to Sawada and Williams [Sawada2017]. Repeating this for all n symbols leaves ¯α as being the bracelet representation of the zth smallest bracelet, i.e. the bracelet with z−1 smaller bracelets. As the binary search will take log(k) operations for each of the n symbols, requiring O(k2⋅n4) time to rank for each symbol at each position. Therefore the total complexity is O(n5⋅k2⋅log(k)) time. ∎

Starting with the odd-length case, Proposition 3 shows that every palindromic necklace of odd length contains exactly one word that can be written as ¯ϕx¯ϕR where ¯ϕ∈Σ(n−1)/2 and x∈Σ. This fact is used to rank the number of bracelets by constructing a tree representing every prefix of a word of the form ¯ϕx¯ϕR that belongs to a bracelet greater than ¯v.

The number of palindromic necklaces of odd length n over Σ equals k(n+1)/2.

High level idea for the Odd Case. Here we provide a high level idea for the approach we follow for computing PO(¯v). Let ¯v have a length n. Since PO(¯v) only contains words of the form ¯ϕx¯ϕR, where ¯ϕ∈Σ(n−1)/2 and x∈Σ, we have that ¯wi=¯wn−i for every ¯w∈PO(¯v).As the lexicographically smallest rotation of every ¯w∈PO(¯v) must be greater than ¯v, it follows that any word rotation of ¯w must be greater than ¯v and therefore every subword of ¯w must also be greater than or equal to the prefix of ¯v of the same length. This property is used to compute the size of PO(¯v) by iteratively considering the set of prefixes of each word in PO(¯v) in increasing length representing them with the tree TO(¯v). As generating TO(¯v) directly would require an exponential number of operations, a more sophisticated approach is needed for the calculation of |PO(¯v)| based on partial information.

As the tree TO(¯v) is a tree of prefixes, vertices in TO(¯v) are referred to by the prefix they represent. So ¯u∈TO(¯v) refers to the unique vertex in TO(¯v) representing ¯u. The root vertex of TO(¯v) corresponds to the empty word. Every other vertex ¯u∈TO(¯v) corresponds to a word of length i, where i is the distance between ¯u and the root vertex. Given two vertices ¯p,¯c∈TO(¯v), ¯p is the parent vertex of a child vertex ¯c if and only if ¯c=¯px for some symbol x∈Σ. The ith layer of TO(¯v) refers to all representing words of length i in TO(¯v) . The size of PO(¯v) is equivalent to the number of unique prefixes of length n+12 of words of the palindromic form ¯ϕx¯ϕR in PO(¯v). This set of prefixes corresponds to the vertices in the layer n+12 of TO(¯v). Therefore the maximum depth of TO(¯v) is n+12.