Ranking and Selection as Stochastic Control

Under a Bayesian framework, we formulate the fully sequential sampling and selection decision in statistical ranking and selection as a stochastic control problem, and derive the associated Bellman equation. Using value function approximation, we derive an approximately optimal allocation policy. We show that this policy is not only computationally efficient but also possesses both one-step-ahead and asymptotic optimality for independent normal sampling distributions. Moreover, the proposed allocation policy is easily generalizable in the approximate dynamic programming paradigm. 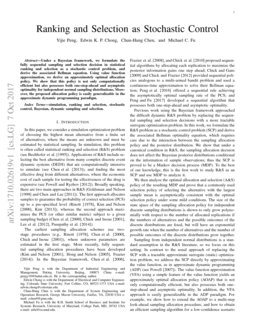 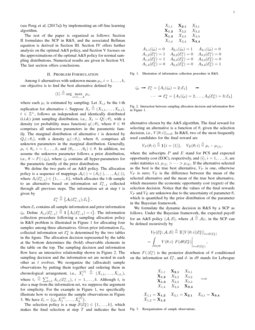 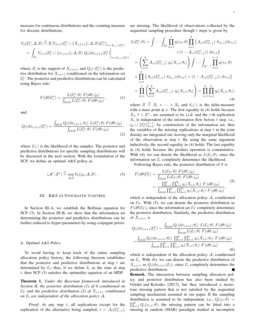 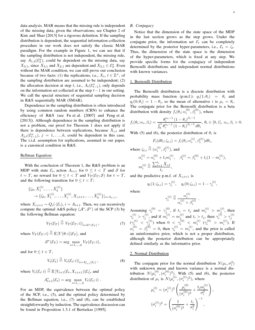 In this paper, we consider a simulation optimization problem of choosing the highest mean alternative from a finite set of alternatives, where the means are unknown and must be estimated by statistical sampling. In simulation, this problem is often called statistical ranking and selection (R&S) problem (see

Bechhofer et al. [1995]). Applications of R&S include selecting the best alternative from many complex discrete event dynamic systems (DEDS) that are computationally intensive to simulate (see Chen et al. [2013]), and finding the most effective drug from different alternatives, where the economic cost of each sample for testing the effectiveness of the drug is expensive (see Powell and Ryzhov [2012]). Broadly speaking, there are two main approaches in R&S (Goldsman and Nelson [1998] and Chen and Lee [2011]

). The first approach allocates samples to guarantee the probability of correct selection (PCS) up to a pre-specified level (

The earliest sampling allocation schemes use two-stage procedures (e.g., Rinott [1978], Chen et al. [2000], Chick and Inoue [2001]), where unknown parameters are estimated in the first stage. More recently, fully sequential sampling allocation procedures have been developed (Kim and Nelson [2001], Hong and Nelson [2005], Frazier [2014]). In the Bayesian framework, Chen et al. [2006], Frazier et al. [2008], and Chick et al. [2010] proposed sequential algorithms by allocating each replication to maximize the posterior information gains one step ahead; Chick and Gans [2009] and Chick and Frazier [2012] provided sequential policies analogous to a multi-armed bandit problem and used a continuous-time approximation to solve their Bellman equation; Peng et al. [2016] offered a sequential rule achieving the asymptotically optimal sampling rate of the PCS; and Peng and Fu [2017] developed a sequential algorithm that possesses both one-step-ahead and asymptotic optimality.

Previous work using the Bayesian framework approached the difficult dynamic R&S problem by replacing the sequential sampling and selection decisions with a more tractable surrogate optimization problem. In this work, we formulate the R&S problem as a stochastic control problem (SCP) and derive the associated Bellman optimality equation, which requires care due to the interaction between the sampling allocation policy and the posterior distribution. We show that under a canonical condition in R&S, the sampling allocation decision does not affect the Bayesian posterior distributions conditional on the information of sample observations; thus the SCP is proved to be a Markov decision process (MDP). To the best of our knowledge, this is the first work to study R&S as an SCP and use MDP to analyze it.

We then analyze the optimal allocation and selection (A&S) policy of the resulting MDP and prove that a commonly used selection policy of selecting the alternative with the largest sample mean is asymptotically consistent with the optimal selection policy under some mild conditions. The size of the state space of the sampling allocation policy for independent discrete sampling distributions is shown to only grow polynomially with respect to the number of allocated replications if the numbers of alternatives and the possible outcomes of the discrete distributions are fixed, but will have an exponential growth rate when the number of alternatives and the number of possible outcomes of the discrete distributions grow together.

Sampling from independent normal distributions is a standard assumption in the R&S literature, so we focus on this setting. In contrast to the usual approach of replacing the SCP with a tractable approximate surrogate (static) optimization problem, we address the SCP directly by approximating the value function, as in approximate dynamic programming (ADP) (see

Powell [2007]). The value function approximation (VFA) using a simple feature of the value function yields an approximately optimal allocation policy (AOAP) that is not only computationally efficient, but also possesses both one-step-ahead and asymptotic optimality. In addition, the VFA approach is easily generalizable in the ADP paradigm. For example, we show how to extend the AOAP to a multi-step look-ahead sampling allocation procedure, and how to obtain an efficient sampling algorithm for a low-confidence scenario (see Peng et al. [2017a]) by implementing an off-line learning algorithm.

Among k alternatives with unknown means μi, i=1,…,k, our objective is to find the best alternative defined by

where each μi is estimated by sampling. Let Xi,t be the t-th replication for alternative i. Suppose Xt△=(X1,t,…,Xk,t), t∈Z+, follows an independent and identically distributed (i.i.d.) joint sampling distribution, i.e., Xt∼Q(⋅;θ), with a density (or probability mass function) q(⋅;θ), where θ∈Θ comprises all unknown parameters in the parametric family. The marginal distribution of alternative i is denoted by Qi(⋅;θi), with a density qi(⋅;θi), where θi comprises all unknown parameters in the marginal distribution. Generally, μi∈θi, i=1,…,k, and (θ1,…,θk)∈θ. In addition, we assume the unknown parameter follows a prior distribution, i.e., θ∼F(⋅;ζ0), where ζ0 contains all hyper-parameters for the parametric family of the prior distribution.

We define the two parts of an A&S policy. The allocation policy is a sequence of mappings At(⋅)=(A1(⋅),…,At(⋅)), where At(Eat−1)∈{1,…,k}, which allocates the t-th sample to an alternative based on information set Eat−1 collected through all previous steps. The information set at step t is given by

where Et contains all sample information and prior information ζ0. Define Ai,t(Eat−1)△=1{At(Eat−1)=i}. The information collection procedure following a sampling allocation policy in R&S problem is illustrated in Figure 1 for allocating four samples among three alternatives. Given prior information E0, collected information set Ea4 is determined by the two tables in the figure. The allocation decision represented by the table at the bottom determines the (bold) observable elements in the table on the top.

The sampling decision and information flow have an interactive relationship shown in Figure 2.

The sampling decision and the information set are nested in each other as t evolves. We reorganize the (allocated) sample observations by putting them together and ordering them in chronological arrangement, i.e., ¯X(t)i△=(¯Xi,1,…,¯Xi,ti), where ti△=∑tℓ=1Ai,ℓ(Eaℓ−1), i=1,…,k. Although ti is also a map from the information set, we suppress the argument for simplicity. For the example in Figure 1, we specifically illustrate how to reorganize the sample observations in Figure 3.

where the subscripts P and E stand for PCS and expected opportunity cost (EOC), respectively, and ⟨i⟩, i=1,…,k, are order statistics s.t. μ⟨1⟩>⋯>μ⟨k⟩. If the alternative selected as the best is the true best alternative, VP is one, otherwise VP is zero; VE is the difference between the mean of the selected alternative and the mean of the true best alternative, which measures the economic opportunity cost (regret) of the selection decision. Notice that the values of the final rewards VP and VE are unknown due to the uncertainty of parameter θ, which is quantified by the prior distribution of the parameter in the Bayesian framework.

We formulate the dynamic decision in R&S by a SCP as follows. Under the Bayesian framework, the expected payoff for an A&S policy (A,S), where A△=AT, in the SCP can be defined recursively by

where L(⋅) is the likelihood of the samples. The posterior and predictive distributions for specific sampling distributions will be discussed in the next section. With the formulation of the SCP, we define an optimal A&S policy as

, we show that the information set determining the posterior and predictive distributions can be further reduced to hyper-parameters by using conjugate priors.

To avoid having to keep track of the entire sampling allocation policy history, the following theorem establishes that the posterior and predictive distributions at step t are determined by Et; thus, if we define Et as the state at step t, then SCP (3) satisfies the optimality equation of an MDP.

At any step t, all replications except for the replication of the alternative being sampled, i=At(Eat−1), are missing. The likelihood of observations collected by the sequential sampling procedure though t steps is given by

Following Bayes rule, the posterior distribution of θ is

Dependence in the sampling distribution is often introduced by using common random numbers (CRN) to enhance the efficiency of R&S (see Fu et al. [2007] and Peng et al. [2013]). Although dependence in the sampling distribution is not a problem, our proof for Theorem 1 does not apply if there is dependence between replications, because Xi,t and Aj,t(Eat−1), j=1,…,k, could be dependent in this case. The i.i.d. assumption for replications, assumed in our paper, is a canonical condition in R&S.

where Xi,t+1∼Qi(⋅|Et), i=At+1. Then, we can recursively compute the optimal A&S policy (A∗,S∗) of the SCP (3) by the following Bellman equation:

Notice that the dimension of the state space of the MDP in the last section grows as the step grows. Under the conjugate prior, the information set Et can be completely determined by the posterior hyper-parameters, i.e., Et=ζt

The Bernoulli distribution is a discrete distribution with probability mass function (p.m.f.): qi(1;θi)=θi and qi(0;θi)=1−θi, so the mean of alternative i is μi=θi

and the predictive distribution of Xi,t+1 is N(μ(t)i,σ2i+(σ(t)i)2). If σ(0)i→∞, μ(t)i=m(t)i, and the prior is the uninformative prior in this case. For a normal distribution with unknown variance, there is a normal-gamma conjugate prior (see DeGroot [2005]).

In Section IV-A, we analyze the properties of the optimal selection policy. For discrete sampling and prior distributions, an explicit form for the optimal A&S policy and its computational complexity are provided in Section IV-B.

where Oi is the feasible set of μi, Fi(⋅|ET) is the posterior distribution of μi with density fi(⋅|ET), i=1,…,k, and for EOC, the optimal selection policy is

For EOC, the optimal selection policy for the Bernoulli distribution under conjugacy is

The following theorem establishes that under some mild conditions, the selection policy selecting the alternative with the largest sample mean is asymptotically consistent with the optimal selection policy for EOC, which is analogous to the result for PCS in Peng et al. [2016].

where Sm(E∗T)=argmaxi=1,…,km(T)i and E∗T means the information set obtained by following the optimal allocation policy A∗, and

Denote Ae as the equal allocation policy. Following Ae, every alternative will be sampled infinitely often as n

goes to infinity. By the law of large numbers, we know

where μ∗i means the true parameter. In addition, {E[μi|EeT]} and {E[maxi=1,…,kμi|EeT]} are martingales. With condition (iii), we have

Then, we prove that following the optimal policy A∗, every alternative will be sampled infinitely often almost surely as T goes to infinity. Otherwise, ∃ k1,k2∈Z+, s.t. k1+k2=k and