Rank of weighted digraphs with blocks 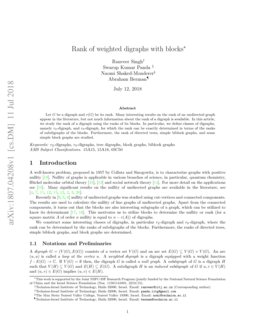 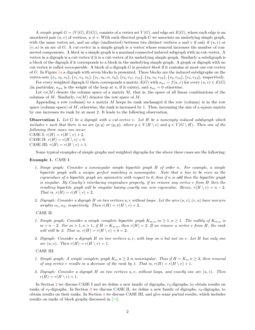 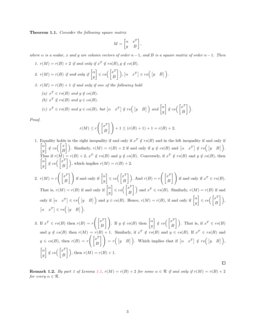 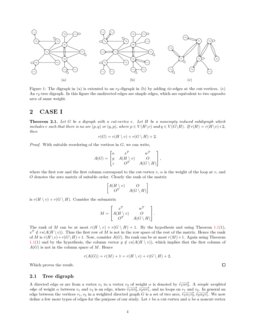 A well-known problem, proposed in 1957 by Collatz and Sinogowitz, is to characterize graphs with positive nullity [19]. Nullity of graphs is applicable in various branches of science, in particular, quantum chemistry, Hückel molecular orbital theory [10], [13] and social network theory [14]. For more detail on the applications see [10]. Many significant results on the nullity of undirected graphs are available in the literature, see [4, 7, 11, 12, 15, 12, 2, 3, 20].

Recently in [9, 8, 6] nullity of undirected graphs was studied using cut-vertices and connected components. The results are used to calculate the nullity of line graphs of undirected graphs. Apart from the connected components, it turns out that the blocks are also interesting subgraphs of a graph, which can be utilized to know its determinant [17, 16]. This motivates us to utilize blocks to determine the nullity or rank (for a square matrix A of order n nullity is equal to n−r(A)) of digraphs.

We construct some interesting classes of digraphs, in particular r2-digraph and r0-digraph, where the rank can be determined by the ranks of subdigraphs of the blocks. Furthermore, the ranks of directed trees, simple biblock graphs, and block graphs are determined.

For every weighted digraph G there corresponds a matrix A(G) with auv=f(u,v) for every (u,v)∈E(G) (in particular, auu is the weight of the loop at u, if it exists), and auv=0 otherwise.

Let cs(M) denote the column space of a matrix M, that is, the space of all linear combinations of the columns of M. Similarly, rs(M) denotes the row space of M.

Appending a row (column) to a matrix M keeps its rank unchanged if the row (column) is in the row space (column space) of M, otherwise, the rank is increased by 1. Thus, increasing the size of a square matrix by one increases its rank by at most 2. It leads to the following observation.

Some typical examples of simple graphs and weighted digraphs for the above three cases are the following:

where α is a scalar, x and y

are column vectors of order

With suitable reordering of the vertices in G, we can write,

where the first row and the first column correspond to the cut-vertex v, α is the weight of the loop at v, and O

denotes the zero matrix of suitable order. Clearly the rank of the matrix

is r(H∖v)+r(G∖H). Consider the submatrix

Which proves the result. ∎

For an undirected tree having maximum matching of size q, the rank is equal to 2q [5]. We show that this result is also true for some categories of tree digraphs. Let T denote a tree digraph obtained from an undirected tree by replacing its each simple edge (u,v) by arcs −−−→uα1v,−−−→vα2u of arbitrary nonzero weights α1,α2. We will call such a tree digraph T a loopless bi-arc tree. If loops are allowed only at cut-vertices then we call T as a cut-loop bi-arc tree. That is, in a cut-loop bi-arc tree, any noncut vertex does not have a loop while any cut-vertex may or may not have a loop. We consider a class of tree digraphs having loops and single arcs on the vertices in the next subsection.

Let T be a loopless bi-arc tree having the maximum matching of size q. Then r(T)=2q.

Let G be a digraph with m cut-vertices and k blocks B1,B2,…,Bk having m1,m2,…,mk cut-vertices of G, respectively. Then ˘Bi denotes the induced subgraph of Bi on the noncut-vertices, i=1,2,…,k. And Gq denotes a digraph obtained after removing of q(≤m) cut-vertices from G.

The proof follows by using Theorem 2.1 for each r2-block of G. ∎

Adding loops or weights on the loops at the cut-vertices does not change the rank of an r2-digraph.

By Remark 1.2, the weights of the loops at the cut-vertices did not play any role in Theorem 2.1 and Theorem 2.5, and hence the result follows. ∎

Let G be an r2-digraph with m cut-vertices. Consider s digraphs W1,W2,…,Ws. Let an ~nc-edge be added between one arbitrary vertex of Wi and one arbitrary cut-vertex of G for i=1,…s. Let G′ be the resulting digraph. Then

The proof follows by Theorem 2.1 for each r2-block of G. ∎

We will now see some more categories of tree digraphs.

Let T denote an r2-tree digraph with s nc-edges or nc-arcs. If q is the maximum matching in T, then r(T)=2q+s.

[18](Theorem 3.5) Let G be an r2-block graph with m cut-vertices and k blocks. Choose m pendant edges, one at each cut-vertex. If each of the remaining n−k blocks has at least two noncut-vertices, then G is nonsingular.

Let G be an r2-biblock graph with m cut-vertices and k blocks. Choose m pendant edges, one at each cut-vertex. If each of the remaining n−k blocks has at least two noncut-vertices in different partition, then r(G)=2k.

Note that any ˘Bi is complete bipartite graph having at least 2 vertices, thus it has rank 2. Hence,

Let G be a digraph with a cut-vertex v. Let H be a nonempty induced subdigraph which includes v such that there is no arc (p,q) or (q,p), where p∈V(H∖v) and q∈V(G∖H). If r(H)=r(H∖v), and any of the following happens,

With suitable relabelling of the vertices, we can write

Using elementary operations, A(G) can be transformed to the matrix

Clearly the result follows for α=0. When wT∉rs(A(G∖H)) or z∉cs(A(G∖H)), then for any value of α,

Let G be a digraph having k blocks. If at least k−1 blocks are r0 blocks, then G is called r0-digraphs.

We prove the result by induction on the number k of blocks. For k=1 the result is trivial. Suppose the result holds for k. Consider a digraph having k+1 blocks. Since G has at least two pendant blocks, there exists a pendant block, without loss of generality B1 which is an r0-block with the cut-vertex v. Then using Theorem 3.1

Since, G∖(B1∖v) has k blocks, all of them, except for at most one, r0-blocks, by the induction hypothesis

Let G be a biblock graph having k blocks. If each block has at least two noncut-vertices in different partition sets, then r(G)=2k.

Note that such a biblock graph G is an r0-digraph. Hence the result follows from the Theorem 3.2. ∎

With suitable relabelling of the vertices, we can write

This proves the result. ∎