This report considers the problem of Byzantine fault-tolerance in synchronous parallelized learning that is founded on the parallelized stochastic gradient descent (parallelized-SGD) algorithm. The system comprises a master, and n workers, where up to f of the workers are Byzantine faulty. Byzantine workers need not follow the master's instructions correctly, and might send malicious incorrect (or faulty) information. The identity of the Byzantine workers remains fixed throughout the learning process, and is unknown a priori to the master. We propose two coding schemes, a deterministic scheme and a randomized scheme, for guaranteeing exact fault-tolerance if 2f < n. The coding schemes use the concept of reactive redundancy for isolating Byzantine workers that eventually send faulty information. We note that the computation efficiencies of the schemes compare favorably with other (deterministic or randomized) coding schemes, for exact fault-tolerance. 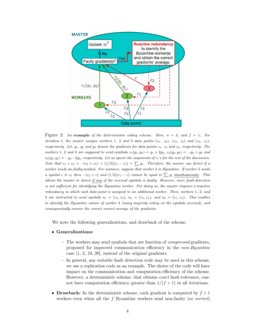 We consider the problem of Byzantine fault-tolerance in synchronous parallelized learning that is founded on the parallelized stochastic gradient descent (parallelized-SGD) method.

The system comprises a master, n workers, and N (≫n) data points denoted by a set Z. The system architecture is shown in Figure 1. Let d be a positive integer, and let Rd denote the set of d

has a non-negative loss function

in a neighbourhood of w∗. Although w∗ may not be the only minimum point, for simplicity w∗ denotes a minimum point for the average loss throughout this report.

The optimization framework forms the basis for most contemporary learning methods, including neural networks and support vector machines

1.1 Overview of the parallelized-SGD method

Parallelized-SGD method is an expedited variant of the stochastic gradient descent method, an iterative learning algorithm [24]. In each iteration t≥0

, the master maintains an estimate

wt of w∗, and updates it using gradients of the loss functions for a certain number of randomly chosen data points at w=wt. The details of the algorithm are as follows.

and sends a symbol ci, which is a function of its computed gradients {gti1,…,gtimi}, to the master. The master obtains the average value of the gradients for all the m data points in Zt,

as a function of the symbols {c1,…,cn} received from the workers. For example, if each worker i sends symbol

Upon obtaining gt, the master updates the parameter estimate wt as

where ηt is a positive real value commonly referred as the ‘step-size’. An illustration of the parallelized-SGD method is presented in Figure 1 for the case when mi=1,∀i.

The above parallelized-SGD method is not robust against Byzantine faulty workers. Byzantine workers need not follow the master’s instructions correctly, and might send malicious incorrect (or faulty) symbols. The identity of the Byzantine workers remains fixed throughout the learning algorithm, and is unknown a priori to the master.

We consider a case where up to f (<n/2) of the workers are Byzantine faulty. Our objective is design a parallelized-SGD method that has exact fault-tolerance, which is defined as follows.

A parallelized-SGD method has exact fault-tolerance if the Master asymptotically converges to a minimum point w∗ exactly, despite the presence of Byzantine workers.

We propose two coding schemes, one of which is deterministic and the other is randomized, for guaranteeing exact fault-tolerance if 2f<n. Obviously, the master cannot tolerate more than or equal to n/2 Byzantine workers [5]. Overviews of each these schemes are presented below. Before we proceed with the summary of our contribution and overviews of proposed coding schemes, let us define the computation efficiency of a coding scheme.

For example, in each iteration of the parallelized-SGD method presented above, the total number of gradients computed by the workers is equal to m, and the master uses the average of all the m gradients to update the parameter estimate (1). Therefore, the computation efficiency of a coding scheme (used for computing the symbols c1,…,cn) in the traditional parallelized-SGD method is equal to 1.

2.1 Overview of the deterministic scheme

We note the following generalizations, and drawback of the scheme.

2.2 Overview of the randomized scheme

The master checks for faults only in intermittent iterations chosen at random, instead of all the iterations. Alternately, in each iteration, the master does a fault-check with some non-zero probability less than 1. By doing so, the master significantly reduces the redundancy in gradients’ computations whilst almost surely identifying the Byzantine workers that send faulty symbols eventually222As the parallelized-SGD method converges to the learning parameter regardless of the initial parameter estimate, a Byzantine worker that eventually stops sending faulty gradients poses no harm to the learning process. Hence, the master only needs to identify Byzantine workers that send faulty gradient(s) eventually.. As in the deterministic scheme, upon detecting any fault(s) the master imposes reactive redundancy to identify the responsible Byzantine worker(s). However, correcting the detection fault(s) is optional. The identified Byzantine worker(s) are eliminated from the subsequent iterations.

We note the following generalizations, and adaptation of the randomized scheme:

There has been some work on coding schemes for Byzantine fault-tolerance in parallelized machine learning, such as

The fault-tolerance properties of the known gradient filters – KRUM [3], trimmed-mean [23], median [23], geometric median of means [6], norm clipping [11], SEVER [8], or others [14, 16] – rely on additional assumptions either on the distribution of the data points or the fraction of Byzantine workers. Moreover, the existing gradient-filters do not obtain exact fault-tolerance unless there are redundant data points.

To the best of our knowledge, none of the prior works have proposed the idea of reactive redundancy for tolerating Byzantine workers efficiently in the context of parallelized learning. In other contexts, such as checkpointing and rollback recovery, mechanisms that combine proactive and reactive redundancy have been utilized. For instance, Pradhan and Vaidya [15] propose a mechanism where a small number of replicas are utilized proactively to allow detection of faulty replicas; when a faulty replica is detected, additional replicas are employed to isolate the faulty replicas.

In this section, we present a specific deterministic scheme for the generic case, and present further details for the randomized scheme.

As an example of the deterministic scheme, we use a replication code. For simplicity, suppose that none of the Byzantine workers have been identified until iteration t≥0. Then, the scheme for the t-iteration is as follows.

The master (randomly) chooses m data points, and assigns each data point to f+1 workers. Thus, each worker, on average, gets m(f+1)/n data points. Upon computing the gradients for all its data points (at wt), each worker sends a symbol; a tuple of its computed gradients. Consequentially, the master receives f+1 copies (or replicas) of each data point’s loss function’s gradient. As there are at most f Byzantine workers, the master can detect if the received copies of a gradient are faulty by simply comparing them with each other. Suppose that the copies of the gradient of a particular data point ^z are faulty (i.e. they are not unanimous). Then, the master imposes reactive redundancy where it re-assigns ^z to f additional workers that compute and send additional f copies of the gradient for ^z. Upon acquiring 2f+1 copies of ^z’s gradient, the master can not only obtain the correct gradient by majority voting, it also identify the responsible Byzantine worker(s). Ultimately, the master recovers the correct gradients for all the m data points, and updates wt as (1).

The identified Byzantine worker(s) are eliminated from the subsequent iterations. Upon updating f and n, the above scheme is repeated for the (t+1)-iteration.

Note: We would like to reiterate the fact that a deterministic coding scheme with computation efficiency greater than 1/(f+1), in all iterations, cannot have exact fault-tolerance against at most f Byzantine workers [13]. However, communication efficiency can be improved using other codes.

In the randomized scheme, the master checks for faults (and does identification of Byzantine worker if needed) only for randomly chosen intermittent iterations. In each iteration, the master runs the traditional parallelized-SGD method by default. However, before updating the parameter estimate, the master decides to check for faults in the received symbols (or gradients) with probability q>0. Fault-checks and identification of Byzantine workers (if needed) is done using the protocol outlined for the deterministic coding scheme in Section 4.1.

For the purpose of analysis, assume that each Byzantine worker i tampers its gradient(s) independently in each iteration with probability at least pi>0. Then, i remains unidentified by the master after t iterations with probability less than or equal to (1−qpi)t, which approaches 0 as t approaches ∞. In other words, i gets identified almost surely. This holds for all Byzantine workers that tamper gradient(s) eventually.

As the master checks for faults with probability q>0 in each iteration, the expected computation efficiency of the randomized scheme is greater than or equal to

From above, the expected computational efficiency of the randomized coding scheme can be made as close to one as desirable by choosing q appropriately. Specifically, for a δ>0, let

Then, the expected computational efficiency of the randomized coding scheme is greater than or equal to 1−δ.

Smaller probability of fault-checks q implies higher efficiency, as is evident from (2). However, smaller q also means higher probability of using faulty gradient(s) for updating the parameter estimate, which could result in slower convergence of the learning algorithm.

Therefore, determining an optimal value of q is a multi-objective optimization problem where;

Obviously, the above objectives cannot be met simultaneously. That is, there does not exist a q that maximizes and minimizes the expected computation efficiency and the probability of faulty updates, respectively, at the same time. This trade-off between the computation efficiency and the reliability (or correctness) of the updates can be managed by the following adaptive approach.

where λt∈[0,1]. Higher value of λt (greater than 1/2) implies that minimizing probFt(q) takes precedence over maximising comEfft(q), and vice versa.

If λt is given by (5), then for higher observed loss ℓt minimizing the probability of faulty updates takes precedence. This is quite intuitive as the master would prefer the updates to fault-free when the observed loss is high, for improved convergence-rate to the learning parameter.

The following boundary conditions further justify the choice of λt given by (5).

5 Generalizations of the Randomized Coding Scheme

Our randomized scheme can be generalized as follows.

In this report, we have presented two coding schemes, a deterministic scheme and a randomized scheme, for exact Byzantine fault-tolerance in the parallelized-SGD learning algorithm.

In the deterministic scheme, the master uses a fault-detection code in each iteration. Upon detecting any fault(s), the master imposes reactive redundancy to correct the faults and identify the Byzantine worker(s) responsible for the fault(s).

The randomized scheme improves upon the computation efficiency of the deterministic scheme. Here, the master uses fault-detection codes only in randomly chosen intermittent iterations, instead of all the iterations. By doing so, the master is able to optimize the trade-off between the expected computation efficiency, and the convergence-rate of the parallelized learning algorithm.

Research reported in this paper was sponsored in part by the Army Research Laboratory under Cooperative Agreement W911NF- 17-2-0196, and by National Science Foundation award 1610543. The views and conclusions contained in this document are those of the authors and should not be interpreted as representing the official policies, either expressed or implied, of the the Army Research Laboratory, National Science Foundation or the U.S. Government.