Suppose k,p∈N with p prime and f∈Z[x] is a univariate polynomial with degree d and all coefficients having absolute value less than p^k. We give a Las Vegas randomized algorithm that computes the number of roots of f in Z/(p^k) within time d^3(k p)^2+o(1). (We in fact prove a more intricate complexity bound that is slightly better.) The best previous general algorithm had (deterministic) complexity exponential in k. We also present some experimental data evincing the potential practicality of our algorithm.

Counting Real Roots in Polynomial-Time for Systems Supported on Circuits

On algorithms to find p-ordering

The concept of p-ordering for a prime p was introduced by Manjul Bhargav...
Aditya Gulati, et al. ∙

In spite of the fundamental nature of computing Np,k(f), the fastest earlier general algorithms had complexity exponential in k: [8] gave a deterministic algorithm taking time (dlog(p)+2k)O(1). While the O-constant was not stated in [8], the proof of the main theorem there indicates that the dependence on k in their algorithm is linear in ek. Note that counting the roots via brute-force takes time dpk(klogp)1+o(1), so the algorithm from [8] is preferable, at least theoretically, for p≥3. Here, we present a simpler, dramatically faster randomized algorithm (Algorithm 2.3 of the next section) that appears practical for all p.

Following the notation above, there is a Las Vegas randomized algorithm that computes Np,k(f) in time kd3(klogp)1+o(1)+(dklog2p)1+o(1). In particular, the number of random bits needed is O(dklog(dk)), and the space needed is O(dk2logp) bits.

We prove Theorem 1.1 in Section 3 below. In our context, Las Vegas randomized

means that, with a fixed error probability (which we can take to be, say,

), our algorithm under-estimates the number of roots. Our algorithm otherwise gives a correct root count,

and always correctly announces whether the output count is correct or not. This type of randomization is standard in numerous number-theoretic algorithms, such as the fastest current algorithms for factoring polynomials over finite fields or primality checking (see, e.g., [2, 17, 7]).

At a high level, our algorithm here and the algorithm from [8] are similar in that they reduce the main problem to a collection of computations, mostly in the finite field Z/(p), indexed by the nodes of a tree with size at worst exponential in k. Also, both algorithms count by partitioning the roots in Z/(pk) into clusters having the same mod p reduction. Put another way, for each root ζ0∈Z/(p) of the mod p reduction of f, we calculate the number of “lifts” ζ0 has to a root ζ∈Z/(pk), paying special attention to those ζ0 that are degenerate: The latter kind of root might not lift to a root in Z/(pk), or might lift to as many as pk−1 roots in Z/(pk) (see, e.g., Lemma 2.1 below). Another subtlety to be aware of is that we compute the number of roots in Z/(pk), without listing all of them: The number of roots in Z/(pk) can be as high as : Indeed, consider the polynomials (xp−x)k (when d≥k) and xd (when k≥d). So we can’t attain a time or space bound sub-exponential in k unless we do something more clever than naively store every root (see Remark 1.2 below).

In finer detail, the algorithm from [8] solves a “small” polynomial system at each node of a recursion tree (using a specially tailored Gröbner basis computation [12]), while our algorithm performs a univariate factorization in (Z/(p))[x] at each node of a smaller recursion tree. Our use of fast factorization (as in [17]) is why we avail to randomness, but this pays off: Gaining access to individual roots in Z/(p) (as suggested in [8]) enables us to give a more streamlined algorithm.

Creating an efficient classification of the roots of f in Z/(pk) (also improving the data structure from [14] by removing all restrictions on f), within time polynomial in d+klogp, is a problem we hope to address in future work.

For the reader interested in implementations, we have a preliminary Maple implementation of Algorithm 2.3 freely downloadable from www.math.tamu.edu/~rojas/countpk.map . A few timings (all done on a Dell XPS13 Laptop with 8Gb RAM and a 256Gb ssd, running Ubuntu Linux 14.04) are listed below:111The timings in years were based on extrapolating (without counting the necessary expansion of laptop memory beyond 8Gb) from examples with much smaller k already taking over an hour.

1.1. A Recurrence from Partial Factorizations

The “perturbations” fi,ζ of f will help us keep track of how the roots of f in Z/(pk) cluster (in a p-adic metric sense) about the roots of ~f. Since f(i)(ζ0)i! is merely the coefficient of xi in the Taylor expansion of f(x+ζ0) about 0, it is clear that f(i)(ζ0)i! is always an integer (under the assumptions above).

We will see in the next section how T(f,p,k) can be identified with a finite rooted directed tree. In particular, it is easy to see that the set T(f,p,k) is always finite since, by construction, only fi,ζ with i≤⌊(k−1)/2⌋ and ζ∈Z/(p) are possible (see also Lemma 3.3 of the next section).

Using base-p expansion, there is an obvious bijection between the ring Zp of p-adic integers and the set of root-based paths in an infinite p-ary tree. It is then natural to build a (finite) tree to store the roots of f in Z/(pk). This type of tree structure was studied earlier by Schmidt and Stewart in [26, 27], from the point of view of classification and (in our notation) upper bounds on Np,k(f). However, it will be more algorithmically efficient to endow our set T(f,p,k) with a tree structure. The following fundamental lemma relates Np,k(f) to a recursion tree structure on T(f,p,k).

Following the notation above, let np(f0,0) denote the number of non-degenerate roots of ~f0,0 in Z/(p). Then, provided k≥2 and f is not identically 0 mod p, we have

We prove Lemma 1.5 in the next section, where it will also easily follow that Lemma 1.5 applies recursively, i.e., our root counting formula still holds if one replaces (f0,0,k,f1,ζ0,ζ0) with (fi−1,μ,ki−1,μ,fi,μ+pi−1ζi−1,ζi−1). There we also show how Lemma 1.5 leads to our recursive algorithm (Algorithm 2.3) for computing Np,k(f). Note that by construction, s(f,ζ0)≥2 implies that ζ0 is a degenerate root of ~f. So the two sums above range over certain degenerate roots of ~f. Note also that Np,k(f) depends only on the residue class of f mod pk, so we will often abuse the notations Np,k(f) and s(f,ζ0) by allowing f∈(Z/(pk))[x] as well. The following example illustrates how Np,k(f) can be computed recursively.

While our T(f,p,k) from our running example has just 3 elements, the earlier tree structure from [26, 27] would have resulted in 190 nodes. We will now fully detail how to efficiently reduce root counting over Z/(pk) to computing p-adic valuations and factoring in (Z/(p))[x].

2. Algebraic Preliminaries and Our Algorithm

Let us first recall the following version of Hensel’s Lemma:

The following lemma enables us to understand the lifts of degenerate roots of ~f.

We are now ready to state our main algorithm.

Before proving the correctness of Algorithm 2.3, it will be important to prove our earlier key lemma.

Proof of Lemma 1.5: Proving our formula clearly reduces to determining how many lifts each possible root ζ0∈Z/(p) of ~f0,0 has to a root of f0,0 in Z/(pk). Toward this end, note that Lemma 2.1 implies that each non-degenerate ζ0 lifts to a unique root of f0,0 in Z/(pk). In particular, this accounts for the summand np(f0,0) in our formula. So now we merely need to count the lifts of the degenerate roots.

If s≥k then f0,0(ζ)=0 mod pk independent of σ. So there are exactly pk−1 values of ζ∈Z/(pk) with ζ=ζ0 mod p. This accounts for the second summand in our formula.

We are at last ready to prove the correctness of Algorithm 2.3.

Step 7 ensures that the value of M is initialized as np(f). Steps 8–15 (once the For loop is completed) then simply add the second and third summands of our formula to M thus ensuring that M=Np,k(f), provided the For loop has run correctly, along with all the For loops in the recursive calls to RandomizedPrimePowerRootCounting. Should any of these For loops run incorrectly, Steps 16–20 ensure that our algorithm correctly announces an under-count. So we are done. ■

Let us now introduce a tree structure on T(f,p,k) that will simplify our complexity analysis.

Let us identify the elements of T(f,p,k) with nodes of a labelled rooted directed tree T(f,p,k) defined inductively as follows: 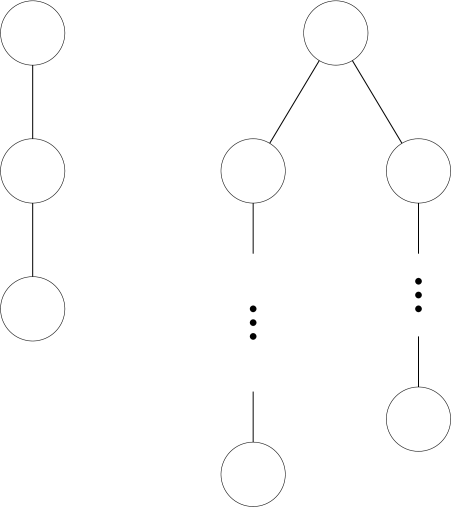 The following lemma will be central in our complexity analysis.

To prove the final bound, note that Lemma 2.2 implies that the term s(fi−1,μ,ζi−1) in the sum is at most the multiplicity of the root ζi−1 of ~fi−1,μ. Since the sum of the multiplicities of the degenerate roots of ~fi−1,μ is no greater than deg~fi−1,μ, we are done. ■

We are at last ready to prove our main theorem.

Proof of Theorem 1.1: Since we already proved at the end of the last section that Algorithm 2.3 is correct, it suffices to prove the stated complexity bound for Algorithm 2.3. Proving that Algorithm 2.3 runs as fast as stated will follow easily from (a) the fast randomized Kedlaya-Umans factoring algorithm from [17] and (b) applying Lemma 3.3 to show that the number of necessary factorizations and p-adic valuation calculations is well-bounded.

More precisely, the For loops and recursive calls of Algorithm 2.3 can be interpreted as a depth-first search of T(f,p,k), with T(f,p,k) being built along the way. In particular, we begin at the root node by factoring ~f0,0=~f in (Z/(p))[x] via [17], in order to find the degenerate roots of ~f. (Factoring in fact dominates the complexity of the gcd computation that gives us np(f0,0) if we use a deterministic near linear-time gcd algorithm such as that of Knuth and Schönhage (see, e.g., [BCS97, Ch. 3]).) This factorization takes time (d1.5logp)1+o(1)+(dlog2p)1+o(1) and requires O(d) random bits.

Now, in order to continue the recursion, we need to compute p-adic valuations of polynomial coefficients in order to find the s(f0,0,ζ0) and determine the edges emanating from our root. Expanding each f0,0(ζ0+px) can clearly be done mod pk, so each such expansion takes time no worse than d2(klogp)1+o(1) via Horner’s method and fast finite ring arithmetic (see, e.g., [2, 13]). Computing s(f0,0,ζ0) then takes time no worse than d(klogp)1+o(1) using, say, the standard binary method for evaluating powers of p. There are no more than ⌊d/2⌋ possible ζ0 (thanks to Lemma 3.3), so the total work so far is

(To simplify our bound, we are rolling multiplicative constants into the exponent, at the price of a negligible increase in the little-o(⋅) terms in the exponent.)

The remaining work can then be bounded similarly, but with one small twist: By Assertion (4) of Lemma 3.3, the number of nodes at depth i of our tree is never more than ⌊d/2⌋ and, by Assertion (3), the sum of the degrees of the ~fi,ζ at level i is no greater than d.

Now observe that (for i≥2) the amount of work needed to compute the s(fi−1,μ,ζi−1) at level i−1 (which are used to define the polynomials at level i) is no greater thand⋅d(klogp)1+o(1), and this will be dominated by the subsequent computations of the expansions of the fi,ζ. In particular, by the basic calculus inequality rt1+⋯+rtℓ≤(r1+⋯+rℓ)t (valid for any r,t≥1), the total amount of work for the factorizations for each subsequent level of T(f,p,k) will be

with a total of O(d) random bits needed. The expansions of the fi,ζ at level i will take time no greater than d3(klogp)1+o(1) to compute. So our total work at each subsequent level is then

So then, the total amount of work for our entire tree will be

and the number of random bits needed is O(dk).