A two-stage adaptive optimal design is an attractive option for increasing the efficiency of clinical trials. In these designs, based on interim data, the locally optimal dose is chosen for further exploration, which induces dependencies between data from the two stages. When the maximum likelihood estimator (MLE) is used under nonlinear regression models with independent normal errors in a pilot study where the first stage sample size is fixed, and the second stage sample size is large, the Fisher information fails to normalize the estimator adequately asymptotically, because of dependencies. In this situation, we present three alternative random information measures and show that they provide better normalization of the MLE asymptotically. The performance of random information measures is investigated in simulation studies, and the results suggest that the observed information performs best when the sample size is small. 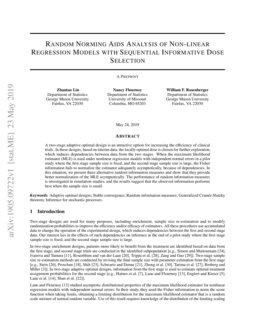 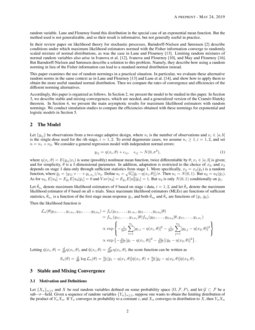 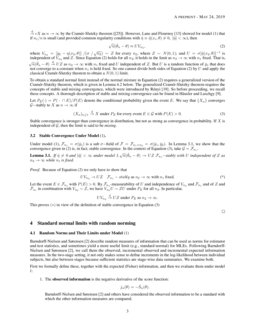 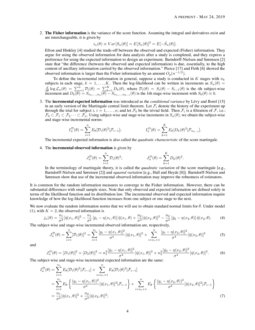 Two-stage designs are used for many purposes, including enrichment, sample size re-estimation and to modify randomization probabilities to improve the efficiency and/or efficacy of estimators. All these procedures use accumulated data to change the operation of the experimental design, which induces dependencies between the first and second stage data. Our interest lies in the effects of such dependencies on inference at the end of a pilot study where the first stage sample size is fixed, and the second stage sample size is large.

studied asymptotic distributional properties of the maximum likelihood estimator for nonlinear regression models with independent normal errors. In their study, they used the Fisher information to norm the score function when taking limits, obtaining a limiting distribution for the maximum likelihood estimator that is a random scale mixture of normal random variable. Use of this result requires knowledge of the distribution of the limiting scaling random variable.

Lane and Flournoy found this distribution in the special case of an exponential mean function. But the method used is not generalizable, and so their result is informative, but not generally useful in practice.

In their review paper on likelihood theory for stochastic processes, Barndorff-Nielsen and Sørensen [2]

describe conditions under which maximum likelihood estimators normed with the Fisher information converge to randomly scaled mixture of normal distributions, as was the case in

Lane and Flournoy [13]. Limiting random mixtures of normal random variables also arise in Ivanova et al. [12], Ivanova and Flournoy [10], and May and Flournoy [16]. But Barndorff-Nielsen and Sørensen describe a solution to this problem. Namely, they describe how using a random norming in lieu of the Fisher information can lead to a standard normal distribution instead.

This paper examines the use of random normings in a practical situation. In particular, we evaluate these alternative random norms in the same context as in Lane and Flournoy [13] and Lane et al. [14], and show how to apply them to obtain the more useful standard normal distribution. Then we compare the rates of convergence and efficiencies of the different norming alternatives.

Accordingly, this paper is organized as follows. In Section 2, we present the model to be studied in this paper. In Section 3, we describe stable and mixing convergences, which are needed, and a generalized version of the Cramér-Slutzky theorem. In Section 4, we present the main asymptotic results for maximum likelihood estimators with random normings. We conduct simulation studies to compare the efficiencies obtained with these normings for exponential and logistic models in Section 5.

Let {yij} be observations from a two-stage adaptive design, where ni is the number of observations and xi∈[a,b] is the single-dose used for the ith stage, i=1,2. To avoid degenerate cases, we assume ni≥1,i=1,2, and set n=n1+n2. We consider a general regression model with independent normal errors:

Then the likelihood function is

Let {Xn}n≥1 and X be real random variables defined on some probability space (Ω,F,P), and let G⊂F be a sub−σ−field. Given a sequence of random variables {Yn}n≥1, suppose one wants to obtain the limiting distribution of the product of YnXn. If Yn converges in probability to a constant c, and Xn converges in distribution to X, then YnXn d→cX as n→∞ by the Cramér-Slutzky theorem [[25]]. However, Lane and Flournoy [13] showed for model (1) that if n1/n is small (and provided common regularity conditions with ˙η≡˙η(xi,θ)≠0, |˙η|<∞), then

To obtain a standard normal limit instead of the normal mixture in Equation (2) requires a generalized version of the Cramér-Slutzky theorem, which is given in Lemma 4.2 below. The generalized Cramér-Slutzky theorem requires the concepts of stable and mixing convergence, which were introduced by Rényi [19]. So before proceeding, we recall these concepts. A thorough description of stable and mixing convergence can be found in Häusler and Luschgy [9].

Let PE(⋅)=P( ⋅ ∩E)/P(E) denote the conditional probability given the event E. We say that {Xn} converges G−stably to X as n→∞ if

Because of Equation (2) we only have to show that

Let the event E∈Fn1 with P(E)>0. By Fn1-measurability of U and independence of Vn2 and Fn1 and of Z and Fn1 in combination with Vn2∼Z, we have Vn2U∼ZU under PE for all n2. In particular,

4.1 Random Norms and Their Limits under Model (1)

describe random measures of information that can be used as norms for estimator and test statistics, and sometimes yield a more useful limit (e.g., standard normal) for MLEs. Following

Barndorff-Nielsen and Sørensen [2], we call them the observed, incremental observed and incremental expected information measures. In the two-stage setting, it not only makes sense to define increments in the log-likelihood between individual subjects, but also between stages because sufficient statistics are stage-wise data summaries. We examine both.

First we formally define these, together with the expected (Fisher) information, and then we evaluate them under model 1:

We now evaluate the random information norms that we will use to obtain standard normal limits for ^θ. Under model (1), with K=2, the observed information is

The subject-wise and stage-wise incremental observed information are, respectively,

The subject-wise and stage-wise incremental expected information are the same:

Lemma 4.1 provides convergence results for the random normings that are then used to obtain the desired standard normal limit for ^θn.

4.2 The Generalized Cramér-Slutzky theorem and Its Application

The Generalized Cramér-Slutzky Theorem [1] Suppose that Xnd→XG−stably. Let g(x,y) be a continuous function of two variables, if Ynp→Y, where Y is a G-measurable random variable. Then

Since Z is independent of Fn1,

In this section, we apply Theorem 4.3

to normalize MLEs following an adaptive optimal design under logistic and exponential (location and scale) regression models. Then we compare their tail probabilities and the difference between cumulative distribution functions using random norms and the Fisher information. For all models, the dose in the first stage is fixed at

x1=2, while the dose for stage 2 is selected from the range x2∈[a,b]=[0.25,4] based on stage 1 data. The divergence of the MLE of θ to infinity necessitates restricting the search to some finite interval (θ–,¯¯¯θ); for simplicity throughout this section, we assume θ∈(0,1/a). All simulations assume the true parameter θ=1 and known variance σ2=0.52.

and wi=ni/n. For each model, we evaluate the MLE norms’ performance for several fixed values of n1, including a locally optimal stage 1 sample size [14]:

where the notation i(θ)≡i(ξA,θ) makes Fisher information’s dependence on the design explicit. To provide an ideal benchmark, n∗1(θ) is evaluated at the true value of θ for all models. A practical method to approximate the locally optimal stage 1 sample size is discussed by Lane et al. [14].

We explore the sample size needed to obtain the normal tail probabilities for the location parameter and scale parameter logistic regression models, separately.

Adaptively selecting the second-stage dose to be

the likelihood given data from both stages is

and the MLE based on all data is

According to functions (4), (5) and (4.1), respectively, the observed information is

the subject-wise incremental observed information is

and the stage-wise and subject-wise incremental expected information are