Conventional power-domain non-orthogonal multiple access (NOMA) relies on precise power control, which requires real-time channel state information at transmitters. This requirement severely limits its application to future wireless communication systems. To address this problem, we consider NOMA without power allocation, where we exploit the random channel fading and opportunistically perform successive interference cancellation (SIC) detection. To mitigate the multi-user interference, we propose a random NOMA where users randomly transmit their data packets with a certain probability. Then a cross-slot SIC packet recovery scheme is proposed to recover transmitted data packets. We model the cross-slot SIC packet recovery as a Markov process, and provide a throughput analysis, based on which the sum rate is maximized by jointly optimizing the transmission probability and the encoding rate of users. 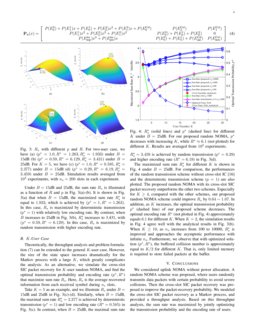 In downlink NOMA [2, 3], data symbols targeted for different devices are superimposed at the base station (BS) with different power, and then broadcasted to the devices. At each receiving device, different data symbols experience the same fading, so that successive interference cancellation (SIC) detection can be conducted to recover each data symbol. However, for uplink NOMA, symbols from different transmitting devices experience different random fading, which may result in SIC detection failure. In order to address this problem, uplink power control has been proposed [4, 5], where the transmission power is allocated according to different path losses of different devices. In addition, the channel inversion technique [6, 7, 8, 9] exploits instantaneous channel state information at transmitters (CSIT) to perform transmission power allocation, so that each transmitted symbol can be received at designated power. Although power allocation is an important factor to improve the system sum rate, power allocation-based NOMA requires real-time CSIT and precise power control, which severely limits its application to the massive number of low-cost devices in future wireless communication [1].

In this paper, we consider uplink NOMA without power allocation, where the SIC detection is performed opportunistically according to the random channel feature. To avoid severe packet collisions, we propose a random NOMA scheme, where users randomly transmit their data packets with a certain probability. Then the BS performs cross-slot SIC packet recovery to improve the recovery probability of previously failed data packets, so that higher system throughput can be achieved. Furthermore, we model the cross-slot SIC packet recovery as a Markov process, and the state-transition in this Markov process is analyzed to provide a throughput analysis. Based on this throughput analysis, we maximize the sum rate of the proposed random NOMA scheme by jointly optimizing the transmission probability and the encoding rate of users.

We illustrate our K-user random uplink NOMA system in Fig. 1(a). Each user has a list of data packets to be transmitted, and all the users attempt to transmit their data packets to a single BS over the same time-frequency resource. The entire transmission period is divided into time slots, where the duration of each time slot is configured to accommodate the transmission of one data packet.

Each transmitted data packet is assumed to experience a quasi-static Rayleigh fading, where the fading coefficient remains constant during one packet transmission, but varies independently from packet to packet. Different from conventional NOMA schemes [4, 5, 6, 7, 8], we assume that the channel state information (CSI) is only available to the BS, and no power allocation is adopted at the transmitter. Instead, we adopt equal transmission power PT for different users. In order to mitigate the multi-user interference, we propose the random transmission scheme, i.e., in each time slot t, users choose to transmit data packets with a probability p, 0<p≤1. Then, the received signal yt at time slot t is

where K+t is the set of active users in slot t, and xkt is the data packet transmitted from an active user k∈K+t. In addition, each data symbol in xkt has unit power, and hkt∼CN(0,1) represents the Rayleigh fading coefficient for user k in slot t, and nt is the additive white Gaussian noise, i.e., nt∼CN(0,σ2n). In each time slot t, both K+t and hkt,∀k∈K+t are assumed known at the BS. This active-user identification and CSI acquisition problem can be readily solved by inserting a unique pilot sequence into each user’s data packet [18]. A schematic diagram of the random packet transmission is illustrated in Fig. 1(b).

Different from the ideal SIC detection in power allocation-based NOMA, the SIC detection in our scheme is performed opportunistically due to the random fading. To improve the packet-recovery probability, the residual signal that contains unrecovered packets is stored in a collision buffer. Then the BS feeds back an acknowledge (ACK) message to the users whose packets are recovered, so that they can transmit new packets. No feedback is triggered by unrecovered packets, and corresponding users will randomly perform re-transmission until they detect the ACK message. Once a re-transmitted packet is recovered, its interference is cancelled from the collision buffer by cross-slot IC, so that the remaining packets in the buffer can be recovered. The details are explained below.

Intra-slot SIC detection: Due to the random channel fading, data packets are received with different received power at the base station. Based on the different received power, SIC detection is performed opportunistically to recover as many packets as possible from the received signal yt. Without loss of generality, we assume K+ active users in slot t, with |h1t|2>|h2t|2>…>|hK+t|2. As shown in Fig. 1(c), the BS first recovers the packet x1t with the largest received power PT|h1t|2, and removes its interference √PTx1th1t from yt, while the signal of other packets is treated as noise. Then the BS successively recovers the packet x2t with the second largest received power PT|h2t|2, and so on. In order to recover all the packets, the encoding rates of these K+ users should satisfy the following K+ inequalities simultaneously

Due to the random fading, (2) may not be satisfied for all K+ users. Then the BS opportunistically finds a maximal number m so that the first m inequalities in (2) are satisfied. In this case, we call slot t a m-recovery slot, since the BS can successively recover m data packets from yt by intra-slot SIC detection. For each of these m recovered packets, an ACK message is fed back to the corresponding user, so that this user can start new transmission. On the other hand, no feedback is triggered by unrecovered packets, so that the active users that detect no ACK will perform re-transmission in future slots. In addition, the residual signal that contains K+−m unrecovered packets is called as a (K+−m)-collision, and this residual signal is stored in a collision buffer for future cross-slot IC.

Overall, upon the reception of yt, the intra-slot SIC detection and cross-slot IC are performed iteratively to recover transmitted data packets. The proposed cross-slot SIC packet recovery is summarized in Algorithm 1.

In this section, we model the cross-slot SIC packet recovery as a Markov process, and provide a throughput analysis. Due to the analysis complexity, we focus on the two-user NOMA with K=2, which is the most common case for NOMA [2, 3, 4]. For analytical convenience, we assume the same encoding rate R for all the users, i.e., Rk=R for k=1,2.

In order to describe the state of the collision buffer, we first define the concept of potential packets. In a 2-collision residual signal, an unrecovered packet xk is termed a potential packet if its fading coefficient satisfies

where P′tt(i,j) indicates the expected number of recovered packets in the transition from state S(i) to state S(j).

Denote p∞S=[p∞0 p2∞2 p2∞1] as the steady-state distribution vector, which indicates the steady-state probabilities of different states. The distribution vector p∞S is obtained by solving the equation p∞SPst=p∞S under the constraint p∞0+p2∞2+p2∞1=1. Finally, the throughput T, which is the expected number of recovered packets in each slot as the total transmission slot approaches infinity, is derived as follows

The sum rate RsΔ=RT is defined as the expected amount of recovered information from each received symbol, and the maximization problem for Rs is formulated as,

According to Section III, the throughput T is a function of the encoding rate R and the transmission probability p. Then the sum rate is maximized by jointly optimizing R and p.

The optimal solution (p∗,R∗) to (7) is only determined by K and noise level σ2n. Therefore, the BS does not need to feed back (p∗,R∗) for each transmission. In addition, we can optimize (p,R) offline for different K and σ2n, and then store the optimization results at the BS. In this way, optimizing (p,R) will not cost any online computational complexity.

Since Rs is a non-convex function of R and p, we resort to a numerical solution to (7). That is, according to the throughput analysis in Section III, the optimal solution (p∗,R∗) is exhaustively searched for the maximized sum rate R∗s.

Theoretically, the throughput analysis and problem formulation (7) can be extended to the general K-user case. However, the size of the state space increases dramatically for the Markov process with a large K, which greatly complicates the analysis. As an alternative, we simulate the cross-slot SIC packet recovery for K-user random NOMA, and find the optimal transmission probability and encoding rate (p∗,R∗) that maximize sum rate Rs. Here, Rs is the average recovered information from each received symbol during ns slots.

The maximized sum rate R∗s for different K is shown in Fig. 4 under B=25dB. For comparison, the performances of the random transmission scheme without cross-slot IC [16] and the deterministic transmission scheme (p=1) are also plotted. The proposed random NOMA with its cross-slot SIC packet recovery outperforms the other two schemes. Especially for K≥4, compared with the other schemes, our proposed random NOMA scheme could improve Rs by 0.64∼1.07. In addition, as K increases, the optimal transmission probability p∗ (dashed line) of our proposed scheme decreases. The optimal encoding rate R∗ (not plotted in Fig. 4) approximately equals 6.1 for different K. When K=2, the simulation results in Fig. 4 agree well with the analytical results in Fig. 3(b). When K≥10, as ns increases from 100 to 10000, R∗s is improved and approaches the asymptotic performance with infinite ns. Furthermore, we observe that with optimized solution (p∗,R∗), the buffered collision number is approximately equal to K/2 for different K. That is, only limited memory is required to store failed packets at the buffer.

We considered uplink NOMA without power allocation. A random NOMA scheme was proposed, where users randomly transmits data packets with certain probability to avoid severe collisions. Then the cross-slot SIC packet recovery was proposed to improve the packet-recovery probability. We modeled the cross-slot SIC packet recovery as a Markov process, and provided a throughput analysis. Based on this throughput analysis, the sum rate was maximized by jointly optimizing the transmission probability and the encoding rate of users.

For notational simplicity, we denote the received SNR of xk from user k as bkΔ=PT|hk|2/σ2n. Then bk

where B=PT/σ2n is the average received SNR. Furthermore, we denote ρthΔ=2R−1, and assume R≥1 for subsequent analysis. Then, the event probabilities are derived below.

Enm: The probability that n out of K users are active is equal to CKnpn(1−p)K−n. According to (2), the current slot is m-recovery if the received SNR satisfies the following constraints

where ηnkΔ=ρth(1+n∑i=k+1bi) is the SNR threshold to recover xk. Since there are totally n! different permutations of {b1,b2,…,bn}, we have

According to (8), we have the following results

Erecnop, Erecpot, EColnew, EColold: These events can be divided into independent sub-events. For example, Erecpot occurs if (a) E11 or E21 occurs and (b) recovered packet in current slot is the potential packet in buffer. If condition (a) is satisfied, condition (b) holds with probability 1/2. Therefore, we have

Similarly, according to the definitions in Table. I, we have