In this paper we consider a new normalization of matrices obtained by choosing distinct codewords at random from linear codes over finite fields and find that under some natural algebraic conditions of the codes their empirical spectral distribution converges to Wigner's semicircle law as the length of the codes goes to infinity. One such condition is that the dual distance of the codes is at least 5. This is analogous to previous work on the empirical spectral distribution of similar matrices obtained in this fashion that converges to the Marchenko-Pastur law. 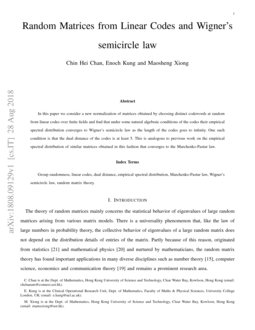 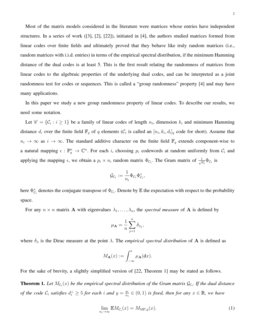 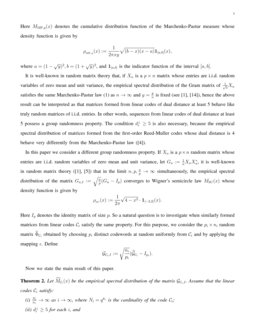 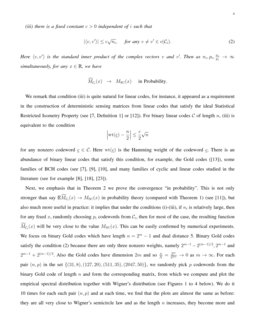 In this manuscript, we study the limiting distribution for the joint law...
Gerardo Barrera, et al. ∙

Codes over integers, and the singularity of random matrices with large entries

Continuous boundary condition at the interface for two coupled fluids

A Comparison of Distance Bounds for Quasi-Twisted Codes

Optimal coding and the origins of Zipfian laws

The problem of compression in standard information theory consists of as...
Ramon Ferrer-i-Cancho, et al. ∙

The theory of random matrices mainly concerns the statistical behavior of eigenvalues of large random matrices arising from various matrix models. There is a universality phenomenon that, like the law of large numbers in probability theory, the collective behavior of eigenvalues of a large random matrix does not depend on the distribution details of entries of the matrix. Partly because of this reason, originated from statistics

[21] and mathematical physics [20] and nurtured by mathematicians, the random matrix theory has found important applications in many diverse disciplines such as number theory [15], computer science, economics and communication theory [19] and remains a prominent research area.

Most of the matrix models considered in the literature were matrices whose entries have independent structures. In a series of work ([3, 2, 22]), initiated in [4], the authors studied matrices formed from linear codes over finite fields and ultimately proved that they behave like truly random matrices (i.e., random matrices with i.i.d. entries) in terms of the empirical spectral distribution, if the minimum Hamming distance of the dual codes is at least 5. This is the first result relating the randomness of matrices from linear codes to the algebraic properties of the underlying dual codes, and can be interpreted as a joint randomness test for codes or sequences. This is called a “group randomness” property [4] and may have many applications.

In this paper we study a new group randomness property of linear codes. To describe our results, we need some notation.

Let C={Ci:i≥1} be a family of linear codes of length ni, dimension ki and minimum Hamming distance di over the finite field Fq of q elements (Ci is called an [ni,ki,di]q code for short). Assume that ni→∞ as i→∞. The standard additive character on the finite field Fq extends component-wise to a natural mapping ϵ:Fnq→Cn. For each i, choosing pi codewords at random uniformly from Ci and applying the mapping ϵ, we obtain a pi×ni random matrix ΦCi. The Gram matrix of 1√niΦCi is

here Φ∗Ci denotes the conjugate transpose of ΦCi. Denote by E the expectation with respect to the probability space.

For any n×n matrix A with eigenvalues λ1,…,λn, the spectral measure of A is defined by

where δλ is the Dirac measure at the point λ. The empirical spectral distribution of A is defined as

For the sake of brevity, a slightly simplified version of [22, Theorem 1] may be stated as follows.

Let MCi(x) be the empirical spectral distribution of the Gram matrix GCi. If the dual distance of the code Ci satisfies d⊥i≥5 for each i and y=pini∈(0,1) is fixed, then for any x∈R, we have

It is well-known in random matrix theory that, if Xn is a p×n

matrix whose entries are i.i.d. random variables of zero mean and unit variance, the empirical spectral distribution of the Gram matrix of

1√nXn satisfies the same Marchenko-Pastur law (1) as n→∞ and y=pn is fixed (see [1, 14]), hence the above result can be interpreted as that matrices formed from linear codes of dual distance at least 5 behave like truly random matrices of i.i.d. entries. In other words, sequences from linear codes of dual distance at least 5 possess a group randomness property. The condition d⊥i≥5 is also necessary, because the empirical spectral distribution of matrices formed from the first-order Reed-Muller codes whose dual distance is 4 behave very differently from the Marchenko-Pastur law ([4]).

In this paper we consider a different group randomness property. If Xn is a p×n random matrix whose entries are i.i.d. random variables of zero mean and unit variance, let Gn:=1nXnX∗n, it is well-known in random matrix theory ([1, 5]) that in the limit n,p,np→∞ simultaneously, the empirical spectral distribution of the matrix Gn,I:=√np(Gn−Ip) converges to Wigner’s semicircle law MSC(x) whose density function is given by

p. So a natural question is to investigate when similarly formed matrices from linear codes Ci satisfy the same property. For this purpose, we consider the pi×ni random matrix ˜ΦCi obtained by choosing pi distinct codewords at random uniformly from Ci and by applying the mapping ϵ. Define

Now we state the main result of this paper.

Let ˜MCi(x) be the empirical spectral distribution of the matrix GCi,I. Assume that the linear codes Ci satisfy:

is the standard inner product of the complex vectors

v and v′. Then as ni,pi,nipi→∞ simultaneously, for any x∈R, we have

We remark that condition (iii) is quite natural for linear codes, for instance, it appeared as a requirement in the construction of deterministic sensing matrices from linear codes that satisfy the ideal Statistical Restricted Isometry Property (see [7, Definition 1] or [12]). For binary linear codes C of length n, (iii) is equivalent to the condition

for any nonzero codeword c–∈C. Here wt(c–) is the Hamming weight of the codeword c–. There is an abundance of binary linear codes that satisfy this condition, for example, the Gold codes ([13]), some families of BCH codes (see [7, 9, 10], and many families of cyclic and linear codes studied in the literature (see for example [8, 18, 23]).

Next, we emphasis that in Theorem 2 we prove the convergence “in probability”. This is not only stronger than say E˜MCi(x)→MSC(x) in probability theory (compared with Theorem 1) (see [11]), but also much more useful in practice: it implies that under the conditions (i)-(iii), if ni is relatively large, then for any fixed x, randomly choosing pi codewords from Ci, then for most of the case, the resulting function ˜MCi(x) will be very close to the value MSC(x). This can be easily confirmed by numerical experiments. We focus on binary Gold codes which have length n=2m−1 and dual distance 5. Binary Gold codes satisfy the condition (2) because there are only three nonzero weights, namely 2m−1−2(m−1)/2,2m−1 and 2m−1+2(m−1)/2. Also the Gold codes have dimension 2m and so nN=2m22m→0 as m→∞. For each pair (n,p) in the set {(31,8),(127,20),(511,35),(2047,50)}, we randomly pick p codewords from the binary Gold code of length n and form the corresponding matrix, from which we compute and plot the empirical spectral distribution together with Wigner’s distribution (see Figures 1 to 4 below). We do it 10 times for each such pair (n,p) and at each time, we find that the plots are almost the same as before: they are all very close to Wigner’s semicircle law and as the length n increases, they become more and more indistinguishable.

, we use the moment method, that is, we compute the moments and the variance for the empirical spectral distribution and compare them with Wigner’s semicircle law. This is a standard method in random matrix theory and has been used in

In this section we outline the main steps in the proof of Theorem 1 in [22]. This not only serves as a guideline of general ideas to be appreciated in later sections, but also allows us to introduce some crucial results which will be repeatedly used later.

Throughout the paper, let C be an [n,k,d]q linear code. We always assume that its dual distance satisfies d⊥≥5. For any a<b, denote by [a..b] the set of integers in the closed interval [a,b]. Let ϵ be the natural mapping ϵ:Fnq→Cn obtained component-wise from the standard additive character on Fq.

Here s∘γ is the composition of the functions s and γ, and ⟨⋅,⋅⟩ is the standard inner product. Taking expectation with respect to the probability space Ωp and rearranging the terms, the first main step is to rewrite E(Aℓ(s),Ωp) as

where Πℓ,p/Σp is the set of equivalence classes of closed paths of Πℓ,p under the equivalence relation

Here Σp is the permutation group on the set of integers [1..p].

and Ω(Vγ) is uniform probability space of all maps from Vγ to D.

The second main step is to use properties of linear codes over finite fields to conclude that the quantity Wγ is exactly the number of solutions (t0,t1,…,tℓ−1)∈[1..n]ℓ satisfying the system of equations

and g1,g2,…,gn are the n columns of a k×n generating matrix G of the linear code C.

Finally, in the last main step, by some detailed analysis using number theory and graph theory, one can obtain (see [22, Section IV])

Here Γ⊂Πℓ,p/Σp is the subset of all closed paths that form double trees.

, we then can easily obtain the estimate

which is more than enough to prove Theorem 1.

We may reorder the indices as

Similar to the second main step in the previous subsection, expanding the expression ωγ1(s)¯¯¯¯¯¯¯¯¯¯¯¯¯¯ωγ2(s), collecting terms according to the sets Vγ1∩γ2,Vγ1∖Vγ2 and Vγ2∖Vγ1 respectively and taking expectation over the probability space Ωp, we can conclude that the term Wγ1,γ2 defined above is exactly the number of solutions (t0,…,tℓ−1,w0,…,wℓ−1)∈[1..n]2ℓ such that

We remark that in equations (6)–(8), one equation is redundant, so we can remove any one equation without affecting the set of solutions. Using this we can obtain an estimate of Wγ1,γ2 as below:

Since vγ1∩γ2≥1, it can be easily seen that the graph γ:=γ1∪¯¯¯γ2 is a closed path with vγ1∩γ2 vertices and 2ℓ edges, where ¯¯¯γ2 is the closed path defined by reverting the directions of the edges of γ2 (after a cyclic relabelling of the vertices if necessary). The systems of equations (6)-(8) for Wγ1,γ2 are precisely the same as those for Wγ. Therefore Lemma 2 follows directly from Lemma 1 on the estimate of Wγ. ∎

First notice that Wγ≥0 for any γ. Armed with Lemmas 1 and 2, we obtain

If vγ1∩γ2=1, then there is precisely one equation in (6). We remove this equation without affecting Wγ1,γ2. The remaining equations are either in (7) or in (8), the number of solutions to which are exactly Wγ1 and Wγ2 respectively. Hence in this case we also have Wγ1,γ2=0.

Here the constant implied in the big-O term depends only on the parameter ℓ.

Noting that the corresponding ℓ

-th moments of the Wigner semicircle distribution are given by

The rest of this section is devoted to a proof of Theorem 3.

Denote by Π′ℓ,p the set of all closed simple paths γ:[0..ℓ]→[1..p]. This is a subset of Πℓ,p appearing in Section II. Since all the diagonal entries of GI(s) are zero, we can expand the expression of the trace in Aℓ,I(s) as

and Π′ℓ,p/Σp is the set of equivalence classes of simple closed paths of Π′ℓ,p under the equivalence relation

where ΩI(Vγ) is the uniform probability space of all injective maps from Vγ to D.

By Lemma 5 in Section V Appendix we have another estimate:

Note that (c) and (d) may appear only when ℓ is even. Using

we obtain the desired estimates on E(Aℓ,I(s),Ωp,I). This completes the proof of Theorem 3. \qed

To complete the proof of Theorem 2, by the moment convergence theorem [6, p.24], it suffices to prove the following result.

Assume the conditions of Theorem 2 are satisfied. Then

This section is devoted to a proof of theorem 4.

Similar to the first main step in Section II, we can write

Π′ℓ,p under the equivalence relation

First, by the condition in (2), we easily obtain

Next, we have the following estimation:

Now assume vγ1∩γ2=0. We remark that if we use the above approach, we can only obtain

which falls short of our expectation (13). So we adopt a different method.

By using definition, we can rewrite βγ1,γ2 as