Random Embeddings of Graphs: The Expected Number of Faces in Most Graphs is Logarithmic

A random 2-cell embedding of a connected graph G in some orientable surface is obtained by choosing a random local rotation around each vertex. Under this setup, the number of faces or the genus of the corresponding 2-cell embedding becomes a random variable. Random embeddings of two particular graph classes – those of a bouquet of n loops and those of n parallel edges connecting two vertices – have been extensively studied and are well-understood. However, little is known about more general graphs despite their important connections with central problems in mainstream mathematics and in theoretical physics (see [Lando Zvonkin, Springer 2004]). There are also tight connections with problems in computing (random generation, approximation algorithms). The results of this paper, in particular, explain why Monte Carlo methods (see, e.g., [Gross Tucker, Ann. NY Acad. Sci 1979] and [Gross Rieper, JGT 1991]) cannot work for approximating the minimum genus of graphs. In his breakthrough work ([Stahl, JCTB 1991] and a series of other papers), Stahl developed the foundation of "random topological graph theory". Most of his results have been unsurpassed until today. In our work, we analyze the expected number of faces of random embeddings (equivalently, the average genus) of a graph G. It was very recently shown [Campion Loth Mohar, arXiv 2022] that for any graph G, the expected number of faces is at most linear. We show that the actual expected number of faces is usually much smaller. In particular, we prove the following results: 1) 1/2ln n - 2 < 𝔼[F(K_n)] ≤ 3.65ln n, for n sufficiently large. This greatly improves Stahl's n+ln n upper bound for this case. 2) For random models B(n,Δ) containing only graphs, whose maximum degree is at most Δ, we show that the expected number of faces is Θ(ln n). 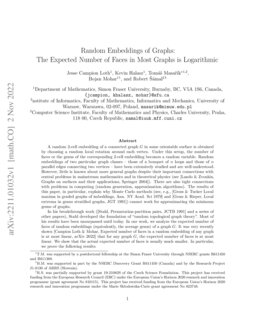 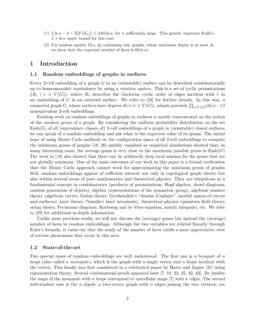 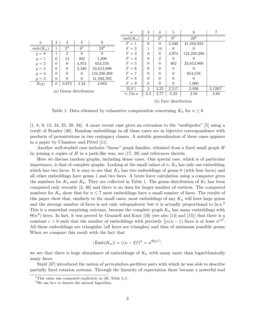 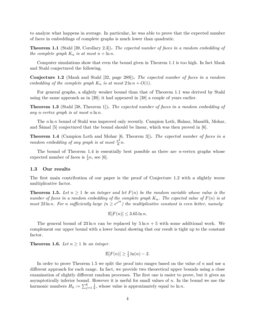 Bounding the number of edges of matchstick graphs

We show that a matchstick graph with n vertices has no more than 3n-c√(n...
Jérémy Lavollée, et al. ∙

We study the following question: how few edges can we delete from any H-...
Jacob Fox, et al. ∙

Embeddable of one-vertex graph with rotations into torus

Sharp bounds for the chromatic number of random Kneser graphs