Radon transform is widely used in physical and life sciences and one of its major applications is the X-ray computed tomography (X-ray CT), which is significant in modern health examination. The Radon inversion or image reconstruction is challenging due to the potentially defective radon projections. Conventionally, the reconstruction process contains several ad hoc stages to approximate the corresponding Radon inversion. Each of the stages is highly dependent on the results of the previous stage. In this paper, we propose a novel unified framework for Radon inversion via deep learning (DL). The Radon inversion can be approximated by the proposed framework with an end-to-end fashion instead of processing step-by-step with multiple stages. For simplicity, the proposed framework is short as iRadonMap (inverse Radon transform approximation). Specifically, we implement the iRadonMap as an appropriative neural network, of which the architecture can be divided into two segments. In the first segment, a learnable fully-connected filtering layer is used to filter the radon projections along the view-angle direction, which is followed by a learnable sinusoidal back-projection layer to transfer the filtered radon projections into an image. The second segment is a common neural network architecture to further improve the reconstruction performance in the image domain. The iRadonMap is overall optimized by training a large number of generic images from ImageNet database. To evaluate the performance of the iRadonMap, clinical patient data is used. Qualitative results show promising reconstruction performance of the iRadonMap. 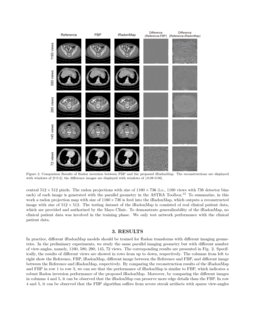 In physical and life sciences, the reconstruction problem, which is to determine the internal structure or some property of the internal structure of an object without having to macroscopically damage the object, is essential. In 1917, Johann Radon of Austria presented a solution to the reconstruction problem with Radon transform and the corresponding inversion formula[radon20051]. Up to now, Radon transform has been used in various applications, including the removal of multiple reflections[thorson1985velocity][sacchi1995high], regional and global seismology[gorman1999wave][gu2009mantle], astrophysics[bracewell1956strip], and computed tomography (CT)[cormack1963representation]. Among these applications, X-ray CT is one of the most important branches of Radon transform. The X-ray CT, which has great advantages in various pathological diagnoses, is an indispensible imaging modality in modern hospitals and clinics.

Radon inversion or the so-called image reconstruction in X-ray CT is challenging because the radon projections acquired with physical sensors or detectors are probably defective and with noise. Conventionally, the reconstruction process contains multiple

In addition to the respective drawbacks of the FBP and MBIR algorithms, the commonality of these two kinds of algorithms is that they both rely on a priorly calculated projection operator, which largely determines the precision of the final reconstruction. Recently, data-driven image reconstruction is receiving more attention. In [zhu2018image], Zhu et al

. proposed a data-driven supervised learning for image reconstruction, which is named as automated transform by manifold approximation (AUTOMAP). Without incorporating a priorly calculated projection operator, the AUTOMAP directly learns a mapping between the sensor and the image domain, which is emerged from an appropriate corpus of training data. Compared to FBP and MBIR algorithms, the AUTOMAP is a unified framework for image reconstruction, which can simultaneously consider the separate

Inspired by the concept of unified image reconstruction of the AUTOMAP, in this work we propose a unified framework for Radon inversion that overcomes the drawbacks of the AUTOMAP in reconstructing images from radon projections with large dimensions. For simplicity, the proposed framework is short as RAINAP (Radon inversion approximation). The RAINAP is implemented with an appropriative neural network that based on the corresponding Radon transform. Specifically, the RAINAP can be divided into two segments. In the first segment, we parameterize the filtering operation and back-projection of the FBP algorithm with two learnable appropriative network layers to perform the domain transform, i.e., from radon projections to image domain. In the second segment, we use a convolutional neural network (CNN) to further refine the reconstruction performance. The two segments are overall optimized using a large number of training data to guarantee a promising reconstruction performance.

In this section, we present the theoretical foundation for the network architecture of the iRadonMap. Without loss of generality, the Radon transform discussed in this work is with a parallel-beam X-ray CT imaging geometry. The network architecture of the iRadonMap for X-ray CT imaging geometries of fan-beam and cone-beam can be deduced similarly.

For an arbitrary 2D object f(x,y), the corresponding Radon transform with a parallel-beam X-ray CT imaging geometry can be written as follows:

Here, p(s,θ) denotes a radon projection of f(x,y) at a certain view-angle θ. δ(⋅) is a Dirac function. s is the position of a detector unit relative to the geometry center of the X-ray imaging system. Thus, f(x,y)δ(xcosθ+ysinθ−s) presents the intersection of an X-ray beam with f(x,y). The radon projections are usually collected within rotation interval of 180 degree, namely, 0≤θ≤π.

, one can use FBP algorithm. Let’s denote the two-dimensional Fourier transform of

Here, |ω| is the transfer function of the ramp filter. Introducing Q(ω,θ)=|ω|P(ω,θ) and denoting the Inverse Fourier transform of Q(ω,θ) as q(s,θ), the reconstruction of an arbitrary 2D object f(x,y) via FBP algorithm can be obtained with the following two steps:

1) apply a ramp filtering operation to p(s,θ) with respect to the variable s in the Fourier domain, as follows:

Here, s=xcosθ+ysinθ denotes a sinusoidal track, from which the radon projection points are related to the reconstructed point (x,y). The reconstruction by the FBP algorithm might suffer from noise-induced artifacts due to the degradation of the radon projections. In order to obtain a promising reconstruction, one can apply some off-the-shelf restoration algorithms in the radon projections and/or image domain to further improve the FBP results. This indicates that the Radon inversion can be approximated by several successive operations, each of which is highly dependent on the results of the previous operation. Recently, Zhu et al. proposed a unified framework for image reconstruction, namely, AUTOMAP[zhu2018image], which is also suitable for Radon inversion. With it, one can reconstruct an image from the radon projections in an end-to-end fashion instead of step-by-step with multiple stages. However, it can be difficult to implement for large-size CT images (e.g., 512×512), due to the stack of fully-connected layers in the AUTOMAP, which might cost huge amount of storages and computations. In order to address this issue, in this work we propose a novel unified framework (iRadonMap) to approximate the Radon inversion of large-size CT image with far less parameters than the AUTOMAP.

. Unlike the ResNet, we do not use batch normalization. It is noted that the CNN architecture used in this work for the second segment is not the only possible implementation. Other well-defined architectures, such as autoencoders, U-net can also be adopted.

To obtain promising reconstruction performance, the iRadonMap is overall optimized by minimizing the mean square error (MSE), which is defined as follows:

Here, ¯x is the final output of the iRadonMap and xref is the reference image. N is the number of image pairs used for training. Θ

represents the learnable parameters in the iRadonMap. This minimization problem can be solved with various off-the-shelf algorithms, and in this work the RMSProp algorithm (see

) is adopted. The corresponding minibatch size, learning rate, momentum, and weight decay are set to 2, 0.00002, 0.9, and 0.0, respectively. The iRadonMap is implemented on PyTorch deep learning framework

The training dataset of the iRadonMap is consisted of a large number of generic images from ImageNet[deng2009imagenet]. In this work, we collected 62,899 RGB color images. Similar to [zhu2018image], the Y-channel luminance of the RGB color images were extracted to form greyscale intensity images. Then, the greyscale intensity images were cropped to the central 512×512 pixels. The radon projections with size of 1160×736 (i.e., 1160 views with 736 detector bins each) of each image is generated with the parallel geometry in the ASTRA Toolbox[Van2016Fast]. To summarize, in this work a radon projection map with size of 1160×736 is feed into the iRadonMap, which outputs a reconstructed image with size of 512×512. The testing dataset of the iRadonMap is consisted of real clinical patient data, which are provided and authorized by the Mayo Clinic. To demonstrate generalizability of the iRadonMap, no clinical patient data was involved in the training phase. We only test network performance with the clinical patient data.

In practice, different iRadonMap models should be trained for Radon transforms with different imaging geometries. In the preliminary experiments, we study the same parallel imaging geometry but with different number of view-angles, namely, 1160, 580, 290, 145, 72 views. The corresponding results are presented in Fig. 2. Specifically, the results of different views are showed in rows from up to down, respectively. The columns from left to right show the Reference, FBP, iRadonMap, different image between the Reference and FBP, and different image between the Reference and iRadonMap, respectively. By comparing the reconstruction results of the iRadonMap and FBP in row 1 to row 3, we can see that the performance of iRadonMap is similar to FBP, which indicates a robust Radon inversion performance of the proposed iRadonMap. Moreover, by comparing the different images in columns 4 and 5, it can be observed that the iRadonMap can preserve more edge details than the FBP. In row 4 and 5, it can be observed that the FBP algorithm suffers from severe streak artifacts with sparse view-angles radon projection data. On the contrary, the reconstruction performance of the iRadonMap is promising with less streak artifacts, compared to that of the FBP.

In this paper, we propose a novel framework for Radon inversion via deep learning, namely, iRadonMap. The iRadonMap is an appropriative neural network that consists of two segments. The first segment contains a learnable fully-connected filtering layer and a learnable sinusoidal back-projection layer. The second segment is a common CNN architecture. The preliminary results with clinical data show that the iRadonMap can achieve promising performance in terms of qualitative measurements. More experiments are undergoing.