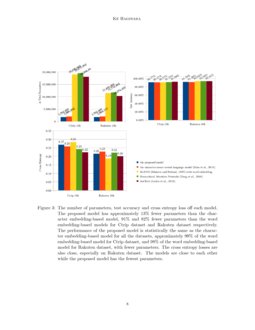 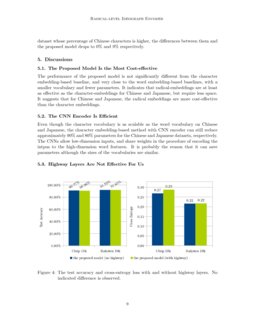 For every character, we use a sequence of n radical-level embeddings to represent it. They are not treated as in a bag because the position of each radical is related to how it is informative (Hsiao et al., 2007). For a Chinese character, it is the sequence of the radical embeddings. When it comes to the other characters, including kanas of Japanese, alphabets, digits, punctuation marks, and special characters, it is the sequence comprised of the corresponding character embedding and n−1

zero vectors. We zero-pad the radical sequences of all the characters to align the lengths.

CNNs (LeCun et al., 1989) have been used for various NLP tasks and shown effective (Collobert et al., 2011; Kim, 2014; Kim et al., 2016). For NLP, CNNs are able to extract the temporal features, reduce the parameters, alleviate over-fitting and improve generalization ability. We also take advantage of the weight sharing technology of CNNs to learn the shared features of the characters.

We apply convolution between Ck and several filters (convolution kernels). For each filter h

, we apply a nonlinear activation function

and a max-pooling on the output to obtain a feature vector. Let

r be the stride, w be the window, Hh be the hidden weight of a filter, respectively. The feature vector of k obtained by h is given by:

where ⋆ is the convolution operator. The pooling window is m×nr−w+1 to obtain the most important information of word k.

After the max-pooling layer, we concatenate and flatten all of the outputs through all of the filters as the feature vector of the word. Let a be the number of the output channel of each filter. If we use totally h filters, each output of which is xkh=[xh1 xh2 xh3 ... xha], the output feature of k is xkh=[x11 x22 x33 ... x1a x21 x22 x23 ... x2a xh1 xh2 xh3 ... xha]. Here, we assume that the number of the output channels of every filter is the same, but we tailor it for each filter in the experiments following Kim et al. (2016).

An RNN is a kind of neural networks designed to learn sequential data. The output of an RNN unit at time t depends on the output at time t−1. Bi-directional RNNs (Schuster and Paliwal, 1997) are able to extract the past and future information for each node in a sequence, have shown effective for Machine Translation (Bahdanau et al., 2015) and Machine Comprehension (Kadlec et al., 2016).

(Hochreiter and Schmidhuber, 1997) Unit is a kind of unit for RNN that keeps information from long range context. We use a bi-directional RNN of LSTM to encode the document feature from the sequence of the word features.

are the element-wise sigmoid function and multiplication operator.

Our proposed model contains two RNN layers that read document data from different directions. Let s be a document composed of l words. One of the RNN layers reads the document from the first word to the lth word, the other reads the document from the lth word to the first word. Let hl be the final output of the former RNN layer and h1 be the final output of the latter. We concatenate hl and h1 as the document feature. After that, we apply an affine transformation and a softmax to obtain the prediction of the sentiment labels:

where z=h⌢lh1, ⌢ is the concatenation operator. ^y is the estimated label of the document, i is one of the labels in the label set E.

We minimize the cross entropy loss to train the model. Let S be the set of all the documents, and y be the true label of document s, the loss is given by:

In the experiments, we used a Chinese dataset and a Japanese dataset. We used the publicly available Ctrip review data pack 111http://www.datatang.com/data/11936 for Chinese. They are comprised of travel reviews crawled from ctrip.com 222http://www.ctrip.com. We used a subset of 10,000 reviews in the pack. We randomly select 8,000 and 2,000 from it for training and test, respectively. The Japanese dataset is provided by Rakuten, Inc. It contains 64,000,000 reviews of the products in Rakuten Ichiba 111http://www.rakuten.co.jp/. The reviews are labeled with 6-point evaluation of 0-5. We labeled the reviews with less than 3 points as the negative samples, and the others as the positive samples. We randomly chose 10,000 reviews to align the size of the Chinese datasets, 8,000 and 2,000 from it for training and test, respectively.

The detailed information of the datasets is shown in Table 1

We compared the proposed model with the follows:

. They were tuned on the development set of 4,000 reviews, 2,000 from another subset in the public Ctrip data pack, and the other 2,000 randomly chosen from the review data of Rakuten Ichiba. We aligned the sizes of the feature vectors of the words and the documents in different models for a fair comparison. All the embeddings are initialized randomly with the uniform distribution.

All of the models were trained by RMSprop

(Tieleman and Hinton, 2012) with mini-batches of 100 samples. The learning rate and decay term were set as 0.001 and 0.9 respectively, also tuned on the development set.

We segmented the documents into words by Jieba 222https://github.com/fxsjy/jieba and Juman++(Morita et al., 2015) 333For some non-Japanese tokens that creep in the dataset, Juman++ throws errors In such cases, we used Janome (http://mocobeta.github.io/janome/) instead., respectively for Chinese and Japanese. We zero-padded the length of the sentences, words, and radical sequences of the characters as 500, 4 and 3, respectively.

We split the Chinese characters in CJK Unified Ideographs of ISO/IEC 10646-1:2000 character set, until there is no component can be split further, according to CHISE Character Structure Information Database 444http://www.chise.org/ids/. Then the Chinese character is represented by the sequence of the radicals from the left to the right, the top to the bottom as shown in Fig. 2. The sequences are zero-padded to the same length. For an unknown Chinese character not in the set, we treat it as a special character.

5.1 The Proposed Model Is the Most Cost-effective

5.2 The CNN Encoder Is Efficient

Even though the character vocabulary is as scalable as the word vocabulary on Chinese and Japanese, the character embedding-based method with CNN encoder can still reduce approximately 90% and 80% parameters for the Chinese and Japanese datasets, respectively. The CNNs allow low-dimension inputs, and share weights in the procedure of encoding the intpus to the high-dimension word features. It is probably the reason that it can save parameters although the sizes of the vocabularies are similar.

5.3 Highway Layers Are Not Effective For Us

Kim et al. (2016) reported that the highway networks (Srivastava et al., 2015) are effective for RNN language models. A highway layer is tailored to adaptively switch between a full-connected layer and a “highway” that directly outputs the input. We also studied that whether it is effective for our proposed model in the sentiment classification task. Following Kim et al. (2016), we attempted to input the flattened concatenated output of the max-pooling layer to a highway layer that employs ReLU before we input it to RNN. The change of the performance is as shown in Fig. 4.

We observed no significant improvement. Probably for two-class sentiment classification, a full-connected layer with ReLU is not necessary between the CNN encoder and the bi-directional RNN encoder, hence the highway network learned to pass the inputs directly to the outputs all the time.

The computational cost brought by the large word vocabulary is a classical problem when neural networks are employed for NLP. In the earliest works, people limited the size of the vocabulary, which is not able to exploit the potential generalization ability on the rare words (Goodfellow et al., 2016, Chapter 12). It has made people explore alternative methods for the softmax function to efficiently train all the words, e.g., hierarchical softmax (Morin and Bengio, 2005)

(Mnih and Teh, 2012) and negative sampling (Mikolov et al., 2013). However, the temporal complexity of the softmax function is not the only thing suffering the high-dimension vocabulary. Scalable word vocabulary leads to a large embedding layer, hence huge neural network with millions of parameters, which costs quite a few gigabytes to store. Zhang et al. (2015)

introduced a recurrent neural network (RNN) language model that takes character embeddings encoded by convolutional layers as the input. Their model has much fewer parameters than the models using word embeddings, and reached the performance of the state-of-the-art on English, and outperformed baselines on morphologically rich languages. However, for Chinese and Japanese, the character vocabulary is also large, and the character embeddings are blind to the semantic information of the radicals.

We have proposed a model that takes radicals of characters as the inputs for sentiment classification on Chinese and Japanese, whose character vocabulary can be as scalable as word vocabulary. Our proposed model is as powerful as the character embedding-based model, and close to the word embedding-based model for the sentiment classification task, with much smaller vocabulary and fewer parameters. The results show that the radical embeddings are cost-effective for Chinese and Japanese. They are useful for the circumstances where the storage is limited.

There are still a lot to do on radical embeddings. For example, a radical may be related to the meaning sometimes, but express the pronunciation at other times. We will work on dealing with such phenomena for machine learning in the future.

The authors would like to thank Rakuten, Inc. and the Advanced Language Information Forum (ALAGIN) for generously providing us the Rakuten Ichiba data.