We consider a neural network architecture with randomized features, a sign-splitter, followed by rectified linear units (ReLU). We prove that our architecture exhibits robustness to the input perturbation: the output feature of the neural network exhibits a Lipschitz continuity in terms of the input perturbation. We further show that the network output exhibits a discrimination ability that inputs that are not arbitrarily close generate output vectors which maintain distance between each other obeying a certain lower bound. This ensures that two different inputs remain discriminable while contracting the distance in the output feature space. 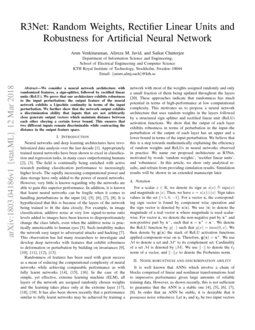 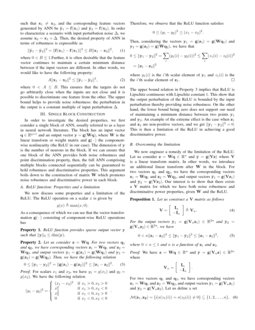 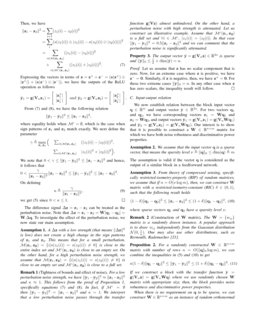 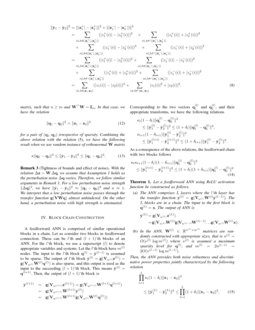 [1]. Appropriately trained neural networks have been shown to excel in classification and regression tasks, in many cases outperforming humans [2, 3]. The field is continually being enriched with active research pushing classification performance to increasingly higher levels. The rapidly increasing computational power and data storage have only added to the power of neural networks. However, very little is known regarding why the networks are able to gain this superior performance. In addition, it is known that learnt neural networks can be fragile when it comes to handling perturbations in the input [4, 5, 6, 7, 8]. It is hypothesized that this is because of the layers of the network being trained to fit the data closely. For example, in image classification, additive noise at very low signal-to-noise ratio levels added to images have been known to disporportionately change the class labels, even when the additive noise is practically unnoticeable to human eyes [5]. Such instability makes the network easy target to adversarial attacks and hacking [7]. This observation has led many researchers to investigate and develop deep networks with features that exhibit robustness to deformation or perturbation by building on invariances [9, 10, 11, 12, 13].

Randomness of features has been used with great success as a mean of reducing the computational complexity of neural networks while achieving comparable performance as with fully learnt networks [14, 15, 16]. In the case of the simple, yet effective, extreme learning machine (ELM), all layers of the network are assigned randomly chosen weights and the learning takes place only at the extreme layer [17, 18, 19]. It has also been shown recently that a performance similar to fully learnt networks may be achieved by training a network with most of the weights assigned randomly and only a small fraction of them being updated throughout the layers [20]

. These approaches indicate that randomness has much potential in terms of high-performance at low computational complexity. This motivates us to propose a neural network architecture that uses random weights in the layers followed by a structured sign splitter and rectified linear unit (ReLU) activation functions. We show that the output of each layer exhibits robustness in terms of perturbation in the input–the perturbation of the output of each layer has an upper and a lower bound in terms of the input perturbation. We believe that this is a step towards mathematically explaining the efficiency of random weights and ReLUs in neural networks observed in practice. We name our proposed architecture as R3Net, motivated by words ‘random weights’, ‘rectifier linear units’, and ‘robustness’. In this article, we show only analytical results, and refrain from providing simulation results. Simulation results will be shown in an extended manuscript later.

For a scalar x∈R, we denote its sign as s(x)≜sign(x) and magnitude as |x|. Then, we have x=s(x)⊙|x|. Sign takes values in the set {+1,0,−1}. For a vector x, the corresponding sign vector is found by component wise operation and the sign vector is denoted by s(x). We use |x| to denote the magnitude of a real vector x where magnitude is used scalar-wise. For vector x, we denote the non-negative part by x+ and non-positive part by x−, such that x=x++x−. We denote the ReLU function by g(⋅) such that g(x)=max(0,x). We then denote by g(x) the stack of ReLU activation functions applied component-wise on x. Therefore, g(x)=x+. We use M to denote a set and Mc to its complement set. Cardinality of a set M is denoted by |M|. We use ∥⋅∥ to denote the ℓ2 norm of a vector, and ∥⋅∥F to denote the Frobenius norm.

It is well known that ANNs which involve a chain of blocks comprised of linear and nonlinear transformations lead to impressive performance given large amounts of reliable training data. However, as shown recently, this is not sufficient to guarantee that the ANN is a stable one [4, 5, 6, 7, 8]. In order that an ANN be stable, it is desirable that it possesses noise robustness. Let x1 and x2 be two input vectors such that x1≠x2, and the corresponding feature vectors generated by ANN be ~y1=f(x1) and ~y2=f(x2). In order to characterize a scenario with input perturbation noise Δ, we assume x2=x1+Δ. Then, the desired property of ANN in terms of robustness is expressible as

where 0<B≤1.Further, it is often desirable that the feature vector continues to maintain a certain minimum distance between if the input vectors are different. In other words, we would like to have the following property:

where 0<A≤B. This ensures that the targets do not go arbitrarily close when the inputs are not close and it is possible to discriminate one feature from the other. The upper bound helps to provide noise robustness: the perturbation in the output is a constant multiple of input perturbation Δ.

In order to investigate the desired properties, we first consider a single block of ANN, usually referred to as a layer in neural network literature. The block has an input vector q∈Rq×1 and an output vector y=g(Wq), where W

is the linear transform or weight matrix and

g(⋅) the component-wise nonlinearity (the ReLU in our case). The dimension of y

is the number of neurons in the block. If we can ensure that one block of the ANN provides both noise robustness and point discrimination property, then, the full ANN comprising multiple blocks connected sequentially can be guaranteed to hold robustness and discriminative properties. This argument boils down to the construction of matrix

W which promotes noise robustness and discriminative power in each block.

We now discuss some properties and a limitation of the ReLU. The ReLU operation on a scalar x is given by

Therefore, we observe that the ReLU function satisfies

The upper bound relation in Property 3 implies that ReLU is Lipschitz continuous with Lipschitz constant 1. This show that the output perturbation of the ReLU is bounded by the input perturbation thereby providing noise robustness. On the other hand, the lower bound being zero does not support our need of maintaining a minimum distance between two points y1 and y2. An example of the extreme effect is the case when z1 and z2 are non-positive vectors, and we get ∥y1−y2∥2=0. This is then a limitation of the ReLU in achieving a good discriminative power.

We now engineer a remedy of the limitation of the ReLU. Let us consider z=Wq∈Rn and ¯y=g(Vz) where V is a linear transform matrix. In other words, we introduce an additional linear transform after W in the block. For two vectors q1 and q2, we have the corresponding vectors z1=Wq1 and z2=Wq2, and output vectors ¯y1=g(Vz1) and ¯y2=g(Vz2). Our interest is to show that there exists a V matrix for which we have both noise robustness and discriminative power properties, given W and the ReLU.

Let us construct a V matrix as follows

where equality holds when Mc=∅, which is the case when sign patterns of z1 and z2 match exactly. We next define the parameter

Remark 1 (Tightness of bounds and effect of noise).

Let us assume that z has no scalar component that is zero. Now, for an extreme case where z is positive, we have z−=0. Similarly, if z is negative, then, we have z+=0. For these two extreme cases ∥¯y∥0=n. In any other case when z has zero scalars, the inequality result will follow. ∎

We now establish relation between the block input vector q∈Rm and output vector ¯y∈R2n. For two vectors q1 and q2, we have corresponding vectors z1=Wq1 and z2=Wq2, and output vectors ¯y1=g(Vnz1)=g(VnWq1) and ¯y2=g(Vnz2)=g(VnWq2). Our interest is to show that it is possible to construct a W∈Rn×m matrix for which we have both noise robustness and discriminative power properties.

We assume that the input vector q is a sparse vector, that means the sparsity level ν≜∥q∥0≤dim(q)≜m

The assumption is valid if the vector q is considered as the output of a similar block in a feedforward network.

From theory of compressed sensing, specifically restricted-isometry-property (RIP) of random matrices, we assume that if n=O(νlogm), then, we can construct W matrix with a restricted-isometry-constant (RIC) δ∈(0,1), such that the following result holds

where sparse vectors q1 and q2 have a sparsity level ν.

The W={wij} matrix is a randomly drawn instance. A popular approach is to draw wij

independently from the Gaussian distribution

N(0,1n). One may also use other distributions, such as Bernoulli, Rademacher [21].

For a randomly constructed W∈Rn×m matrix with number of rows n=O(∥q∥0logm), we can combine the inequalities in (5) and (10) to get

If we construct a block with the transfer function ¯y=g(Vnz)=g(VnWq) where we use randomly chosen W matrix with appropriate size, then, the block provides noise robustness and discriminative power properties.

When there is no requirement on q to be sparse, we can construct W∈Rn×m as an instance of random orthonormal matrix, such that n≥m and W⊤W=Im. In that case, we have the relation

for a pair of (q1,q2) irrespective of sparsity. Combining the above relation with the relation (5), we have the following result when we use random instance of orthonormal W matrix

Remark 3 (Tightness of bounds and effect of noise).

Corresponding to the two vectors q(l)1 and q(l)2, and their appropriate transforms, we have the following relations

As a consequence of the above relations, the feedforward chain with two blocks follows

Then, the ANN provides both noise robustness and discriminative power properties jointly characterized by the following relation

where x1 and x2 are two input vectors to the ANN and their corresponding outputs are ¯y(L)1 and ¯y(L)2, respectively. We assume that x1 and x2 are also sparse in some basis.

If we construct an ANN where W(l)∈Rn(l)×m(l) matrices are randomly constructed othonormal matrices with n(l)≥m(l), then, the ANN will provide the following relation

Remark 4 (Tightness of bounds and effect of noise).

As an illustration of the concept, we show the plot showing the perturbation in output of one block alongwith the corresponding input perturbations in Figure 1. In the experiment, we consider q1 to be a isotropic multivariate Gaussian N(0,σ2I) with σ=1 with m=16 and q2=q1+Δ, where Δ is drawn from isotropic multivariate Gaussian distribution N(0,σ2I) with σ=0.25. We choose W with m=n and m=2n with entries drawn from N(0,1n) for various realizations of Δ and q1 and q2. The figure shows the scatter plot of 105 samples. We observe that all values of ∥y1−y2∥2 lie strictly below ∥y1−y2∥2=∥q1−q2∥2 line. Further, we observe that the contraction is greater when a larger dimensional W is used.