A new class of stochastic processes called independent and periodically identically distributed (i.p.i.d.) processes is defined to capture periodically varying statistical behavior. Algorithms are proposed to detect changes in such i.p.i.d. processes. It is shown that the algorithms can be computed recursively and are asymptotically optimal. This problem has applications in anomaly detection in traffic data, social network data, and neural data, where periodic statistical behavior has been observed. 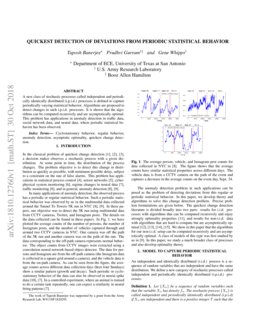 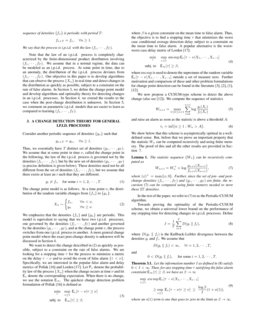 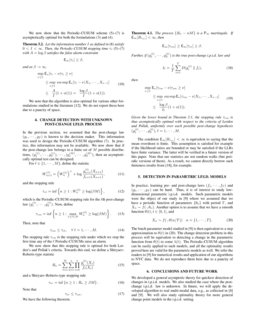 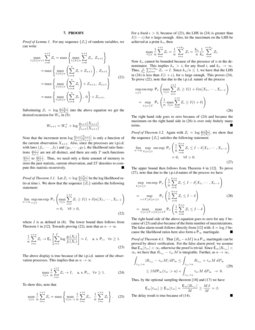 Some Developments in Clustering Analysis on Stochastic Processes

In the classical problem of quickest change detection [1], [2], [3], a decision maker observes a stochastic process with a given distribution. At some point in time, the distribution of the process changes. The problem objective is to detect this change in distribution as quickly as possible, with minimum possible delay, subject to a constraint on the rate of false alarms. This problem has applications in statistical process control [4], sensor networks [5], cyber-physical system monitoring [6], regime changes in neural data [7], traffic monitoring [8], and in general, anomaly detection [8], [9].

In many applications of anomaly detection, the observed process has a periodic or regular statistical behavior. Such a periodic statistical behavior was observed by us in the multimodal data collected around the Tunnel To Towers 5K run in NYC [8], [9]. In these papers, our objective was to detect the 5K run using multimodal data from CCTV cameras, Twitter, and Instagram posts. The details on the data collected can be found in these papers. In Fig. 1

, we have plotted the average counts of the number of persons, the number of Instagram posts, and the number of vehicles captured through and around two CCTV cameras in NYC. One camera was off the path of the 5K run and another camera was on the path of the run. The data corresponding to the off-path camera represents normal behavior. The object counts from CCTV images were extracted using a convolution neural network-based object detector. The data for persons and Instagram are from the off-path camera (the Instagram data is collected in a square grid around a camera), and the vehicle data is from the on-path camera. As can be seen from the figure, the average counts across different data collection days (here four Sundays) show a similar pattern (growth and decay). Such periodic or cyclostationary behavior of the data can also be observed in neural spike data

[10], [7]. In a controlled experiment, where an animal is trained to do a certain task repeatedly, one can expect a similarity in neural firing patterns [7].

The anomaly detection problem in such applications can be posed as the problem of detecting deviations from this regular or periodic statistical behavior. In this paper, we develop theory and algorithms to solve this change detection problem. Precise problem formulations are given below. The quickest change detection literature is divided broadly into two parts: results for i.i.d. processes with algorithms that can be computed recursively and enjoy strongly optimality properties [11], and results for non-i.i.d. data with algorithms that are hard to compute but are asymptotically optimal [12], [13], [14], [15]. We show in this paper that the algorithms for our non-i.i.d. setup can be computed recursively and are asymptotically optimal. A class of models of this type was first studied by us in [9]. In this paper, we study a much broader class of processes and also develop optimality theory.

Consider another periodic sequence of densities {gn} such that

The change point model is as follows. At a time point ν, the distribution of the random variable changes from {fn} to {gn}:

We want to detect the change described in (2) as quickly as possible, subject to a constraint on the rate of false alarms. We are looking for a stopping time τ for the process to minimize a metric on the delay τ−ν and to avoid the event of false alarm {τ<ν}. Specifically, we are interested in the popular false alarm and delay metrics of Pollak [16] and Lorden [17]. Let Pν

denote the probability law of the process

{Xn} when the change occurs at time ν and let Eν denote the corresponding expectation. When there is no change, we use the notation E∞. The quickest change detection problem formulation of Pollak [16] is defined as

where esssup is used to denote the supremum of the random variable Eν[τ−ν|X1,⋯,Xν−1] outside a set of measure zero. Further motivation and comparison of these and other problem formulations for change point detection can be found in the literature [3], [2], [1], [12].

We now propose a CUSUM-type scheme to detect the above change (also see [12]). We compute the sequence of statistics

and raise an alarm as soon as the statistic is above a threshold A:

We show below that this scheme is asymptotically optimal in a well-defined sense. But, before that we prove an important property that the statistic Wn can be computed recursively and using finite memory. The proof of this and all the other results are provided in Section  7.

The statistic sequence {Wn} can be recursively computed as

where (x)+=max{x,0}. Further, since the set of pre- and post-change densities (f1,⋯,fT) and (g1,⋯,gT) are finite, the recursion (7) can be computed using finite memory needed to store these 2T densities.

In the rest of the paper, we refer to (7) to as the Periodic-CUSUM algorithm.

Towards proving the optimality of the Periodic-CUSUM scheme, we obtain a universal lower bound on the performance of any stopping time for detecting changes in i.p.i.d. processes. Define

is the Kullback-Leibler divergence between the densities

gi and fi. We assume that

Let the information number I as defined in (8) satisfy 0<I<∞. Then, for any stopping time τ satisfying the false alarm constraint E∞[τ]≥β, we have as β→∞

We now show that the Periodic-CUSUM scheme (5)–(7) is asymptotically optimal for both the formulations (3) and (4).

Let the information number I as defined in (8) satisfy 0<I<∞. Then, the Periodic-CUSUM stopping time τc (5)–(7) with A=logβ satisfies the false alarm constraint

We note that the algorithm is also optimal for various other formulations studied in the literature [12]. We do not report these here due to a paucity of space.

In the previous section, we assumed that the post-change law (g1,⋯,gT) is known to the decision maker. This information was used to design the Periodic-CUSUM algorithm (7). In practice, this information may not be available. We now show that if the post-change law belongs to a finite set of M possible distributions, (g(1)1,⋯,g(1)T),⋯,(g(M)1,⋯,g(M)T), then an asymptotically optimal test can be designed.

and the stopping rule

We now show that this stopping rule is optimal for both Lorden’s and Pollak’s criteria. Towards this end, we define a Shiryaev-Roberts-type statistic

and a Shiryaev-Roberts-type stopping rule

We have the following theorem.

Given the lower bound in Theorem 3.1, the stopping rule τcm is thus asymptotically optimal with respect to the criteria of Lorden and Pollak, uniformly over each possible post-change hypothesis (g(ℓ)1,⋯,g(ℓ)T), ℓ=1,⋯,M.

is equivalent to saying that the mean overshoot is finite. This assumption is satisfied for example if the likelihood ratios are bounded or may be satisfied if the LLRs have finite variance. The latter will be verified in a future version of this paper. Note that our statistics are not random walks (but periodic versions of them). As a result, we cannot directly borrow such finiteness results from

can be hard. Thus, it is of interest to study low-dimensional parametric i.p.i.d. models. Such parametric models were the object of our study in

[9] where we assumed that we have a periodic function of parameters {θk} with period T, and Xn∼f(⋅,θn). Another option is to assume that we have a smooth function θ(t),t∈[0,1], and

The batch parameter model studied in [9] is then equivalent to a step approximation to θ(t) in (20). The change detection problem in this process will be equivalent to detecting a change in the parametric function from θ(t) to some λ(t). The Periodic-CUSUM algorithm can be easily applied to such models, and all the optimality results proved here are valid for the parametric models as well. We refer the readers to [9] for numerical results and application of our algorithms to NYC data. We do not reproduce them here due to a paucity of space.

We developed a general asymptotic theory for quickest detection of changes in i.p.i.d. models. We also studied the case where the post-change i.p.i.d. law is unknown. In future, we will apply the developed algorithm to real multi-modal data, e.g., as collected in [8] and [9]. We will also study optimality theory for more general change point models in the i.p.i.d. setting.

For any sequence {Zi} of random variables, we can write

Substituting Zi=loggi(Xi)fi(Xi) into the above equation we get the desired recursion for Wn in (5):

Note that the increment term loggn+1(Xn+1)fn+1(Xn+1) is only a function of the current observation Xn+1. Also, since the processes are i.p.i.d. with laws (f1,⋯,fT) and (g1,⋯,gT), the likelihood ratio functions gn(⋅)fn(⋅) are not all distinct, and there are only T such functions g1(⋅)f1(⋅) to gT(⋅)fT(⋅). Thus, we need only a finite amount of memory to store the past statistic, current observation, and 2T densities to compute this statistic recursively. ∎

Let Zi=loggi(Xi)fi(Xi) be the log likelihood ratio at time i. We show that the sequence {Zi} satisfies the following statement:

The above display is true because of the i.p.i.d. nature of the observation processes. This implies that as n→∞

To show this, note that

Again with Zi=loggi(Xi)fi(Xi), we show that the sequence {Zi} satisfies the following statement:

The right hand side of the above equation goes to zero for any δ because of (23) and also because of the finite number of maximizations. The false alarm result follows directly from [12] with A=logβ because the likelihood ratios here also form a P∞ martingale. ∎

That {Rn−nM} is a P∞ martingale can be proved by direct verification. For the false alarm proof, we assume that E∞[τsr]<∞, otherwise the proof is trivial. Since E∞[Rτsr]<∞, we have that Rτsr−τsrM is integrable. Further, as n→∞,