The last few years have seen an explosion of research on the topic of automated question answering (QA), spanning the communities of information retrieval, natural language processing, and artificial intelligence. This tutorial would cover the highlights of this really active period of growth for QA to give the audience a grasp over the families of algorithms that are currently being used. We partition research contributions by the underlying source from where answers are retrieved: curated knowledge graphs, unstructured text, or hybrid corpora. We choose this dimension of partitioning as it is the most discriminative when it comes to algorithm design. Other key dimensions are covered within each sub-topic: like the complexity of questions addressed, and degrees of explainability and interactivity introduced in the systems. We would conclude the tutorial with the most promising emerging trends in the expanse of QA, that would help new entrants into this field make the best decisions to take the community forward. Much has changed in the community since the last tutorial on QA in SIGIR 2016, and we believe that this timely overview will indeed benefit a large number of conference participants. 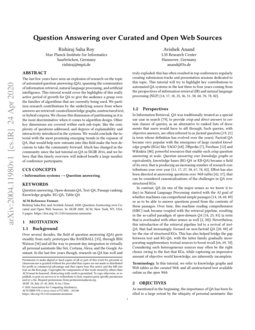 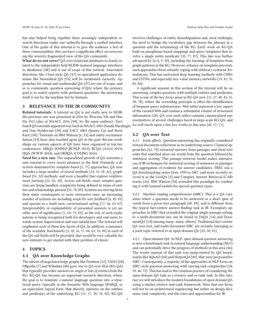 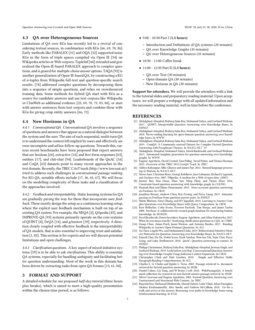 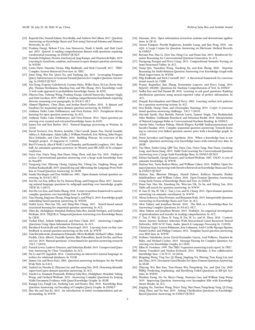 In Information Retrieval, QA was traditionally treated as a special use case in search (Voorhees, 1999), to provide crisp and direct answers to certain classes of queries, as an alternative to ranked lists of documents that users would have to sift through. Such queries, with objective answers, are often referred to as factoid questions (Clarke and Terra, 2003; Cucerzan and Agichtein, 2005) (a term whose definition has evolved over the years). Factoid QA became very popular with the emergence of large curated knowledge graphs (KGs) like YAGO (Suchanek et al., 2007), DBpedia (Auer et al., 2007), Freebase (Bollacker et al., 2008) and Wikidata (Vrandečić and Krötzsch, 2014), powerful resources that enable such crisp question answering at scale. Question answering over knowledge graphs or equivalently, knowledge bases (KG-QA or KB-QA) became a field of its own, that is producing an increasing number of research contributions year over year (Vakulenko et al., 2019; Wu et al., 2020; Qiu et al., 2020; Christmann et al., 2019; Shen et al., 2019; Ding et al., 2019; Bhutani et al., 2019). Effort has also been directed at answering questions over Web tables (Pasupat and Liang, 2015; Iyyer et al., 2017), that can be considered canonicalizations of the challenges in QA over structured KGs.

In contrast, QA (in one of the major senses as we know it today) in Natural Language Processing started with the AI goal of whether machines can comprehend simple passages (Rajpurkar et al., 2016; Yang et al., 2018b; Chen et al., 2017; Clark and Gardner, 2018) so as to be able to answer questions posed from the contents of these passages. Over time, this machine reading comprehension (MRC) task became coupled with the retrieval pipeline, resulting in the so-called paradigm of open-domain QA (Dehghani et al., 2019; Wang et al., 2019; Chen et al., 2017) (a term that is overloaded with other senses as well (Abujabal et al., 2018; Elgohary et al., 2018)). Nevertheless, this introduction of the retrieval pipeline led to a revival of text-QA, that had increasingly focused on non-factoid QA (Cohen et al., 2018; Yang et al., 2018a) after the rise of structured KGs. This has also helped bridge the gap between text and KG-QA, with the latter family gradually incorporating supplementary textual sources to boost recall (Sun et al., 2018, 2019; Savenkov and Agichtein, 2016). Considering such heterogeneous sources may often be the right choice owing to the fact that KGs, while capturing an impressive amount of objective world knowledge, are inherently incomplete.

Terminology. In this tutorial, we refer to knowledge graphs and Web tables as the curated Web, and all unstructured text available online as the open Web.

As mentioned in the beginning, the importance of QA has been fuelled to a large extent by the ubiquity of personal assistants: this has also helped bring together these seemingly independent research directions under one umbrella through a unified interface. One of the goals of this tutorial is to give the audience a feel of these commonalities: this can have a significant effect on overcoming the severely fragmented view of the QA community.

What do we not cover? QA over relational databases is closely related to the independent field NLIDB (natural language interfaces to databases) (Li and Jagadish, 2014) and is out of scope of this tutorial. Associated directions like Cloze-style QA (Lewis et al., 2019) or specialized application domains like biomedical QA (Pampari et al., 2018) will be mentioned cursorily. Approaches for visual and multimodal QA (Guo et al., 2019) are out of scope, and so is community question answering (CQA) where the primary goal is to match experts with pertinent questions: the answering itself is not by the machine but by humans.

3. Relevance to the IR Community

The advent of large knowledge graphs like Freebase (Bollacker et al., 2008), YAGO (Suchanek et al., 2007), DBpedia (Auer et al., 2007) and Wikidata (Vrandečić and Krötzsch, 2014) gave rise to QA over KGs (KG-QA) that typically provides answers as single or lists of entities from the KG. KG-QA has become an important research direction, where the goal is to translate a natural language question into a structured query, typically in the Semantic Web language SPARQL or an equivalent logical form, that directly operates on the entities and predicates of the underlying KG (Wu et al., 2020; Qiu et al., 2020; Vakulenko et al., 2019; Bhutani et al., 2019; Christmann et al., 2019). KG-QA involves challenges of entity disambiguation and, most strikingly, the need to bridge the vocabulary gap between the phrases in a question and the terminology of the KG. Early work on KG-QA built on paraphrase-based mappings and query templates that involve a single entity predicate (Berant et al., 2013; Unger et al., 2012; Yahya et al., 2013). This line was further advanced by (Bast and Haussmann, 2015; Bao et al., 2016; Abujabal et al., 2017b; Hu et al., 2017)

, including the learning of templates from graph patterns in the KG. However, reliance on templates prevents such approaches from robustly coping with arbitrary syntactic formulations. This has motivated deep learning methods with CNNs and LSTMs, and especially key-value memory networks

A significant amount in this section of the tutorial will be on answering complex questions with multiple entities and predicates. This is one of the key focus areas in KG-QA now (Lu et al., 2019; Bhutani et al., 2019; Qiu et al., 2020; Ding et al., 2019; Vakulenko et al., 2019; Hu et al., 2018; Jia et al., 2018), where the overriding principle is often the identification of frequent query substructures. Web tables represent a key aspect of the curated Web and contain a substantial volume of structured information (Dong et al., 2014). QA over such tables contains canonicalized representatives of several challenges faced in large-scale KG-QA, and we will touch upon a few key works in this area (Pasupat and Liang, 2015; Iyyer et al., 2017; Sun et al., 2016).

Question answering has originally considered textual document collections as its underlying source. Classical approaches (Ravichandran and Hovy, 2002; Voorhees, 1999) extracted answers from passages and short text units that matched most cue words from the question followed by statistical scoring. This passage-retrieval model makes intensive use of IR techniques for statistical scoring of sentences or passages and aggregation of evidence for answer candidates. TREC ran a QA benchmarking series from 1999 to 2007, and more recently revived it as the LiveQA (Agichtein et al., 2015) and Complex Answer Retrieval (CAR) tracks (Dietz et al., 2017). IBM Watson (Ferrucci et al., 2010) extended this paradigm by combining it with learned models for special question types.

This is a QA variation where a question needs to be answered as a short span of words from a given text paragraph (Rajpurkar et al., 2016; Yang et al., 2018b), and is different from the typical fact-centric answer-finding task in IR. Exemplary approaches in MRC that extended the original single-passage setting to a multi-document one can be found in DrQA (Chen et al., 2017) and DocumentQA (Clark and Gardner, 2018) (among many, many others). Traditional fact-centric QA over text, and multi-document MRC are recently emerging as a joint topic referred to as open-domain QA (Lin et al., 2018; Dehghani et al., 2019; Wang et al., 2019).

In NLP, open-domain question answering is now a benchmark task in natural language understanding (NLU) and can potentially drive the progress of methods in this area (Kwiatkowski et al., 2019). The recent reprisal of this task was jump-started by QA benchmarks like SQuAD (Rajpurkar et al., 2016) and HotpotQA (Yang et al., 2018b), that were proposed for MRC. Consequently, a majority of the approaches in NLP focus on MRC-style question answering with varying task complexities (Kwiatkowski et al., 2019; Dasigi et al., 2019; Talmor and Berant, 2019; Dua et al., 2019). This has lead to the common practice of considering the open-domain QA task as a retrieve and re-rank task. In this tutorial, we will introduce the modern foundations of open-domain QA using a similar retrieve-and-rank framework. Note that our focus will not be on architectural engineering but rather on design decisions, task complexity, and the roles and opportunities for IR.

Limitations of QA over KGs has recently led to a revival of considering textual sources, in combination with KGs (Savenkov and Agichtein, 2016; Xu et al., 2016; Sun et al., 2018, 2019). Early methods like PARALEX (Fader et al., 2013) and OQA (Fader et al., 2014) supported noisy KGs in the form of triple spaces compiled via Open IE (Mausam, 2016) on Wikipedia articles or Web corpora. TupleInf (Khot et al., 2017) extended and generalized the Open-IE-based PARALEX approach to complex questions, and is geared for multiple-choice answer options. TAQA (Yin et al., 2015) is another generalization of Open-IE-based QA, by constructing a KG of n-tuples from Wikipedia full-text and question-specific search results. (Talmor and Berant, 2018) addressed complex questions by decomposing them into a sequence of simple questions, and relies on crowdsourced training data. Some methods for hybrid QA start with KGs as a source for candidate answers and use text corpora like Wikipedia or ClueWeb as additional evidence (Xu et al., 2016; Das et al., 2017; Sun et al., 2018, 2019; Sydorova et al., 2019; Xiong et al., 2019), or start with answer sentences from text corpora and combine these with KGs for giving crisp entity answers (Sun et al., 2015; Savenkov and Agichtein, 2016).

Static learning systems for QA are gradually paving the way for those that incorporate user feedback. These mostly design the setup as a continuous learning setup, where the explicit user feedback mechanism is built on top of an existing QA system. For example, the NEQA (Abujabal et al., 2018), QApedia (Kratzwald and Feuerriegel, 2019), and IMPROVE-QA (Zhang et al., 2019) systems primarily operate on the core systems of QUINT (Abujabal et al., 2017b), DrQA (Chen et al., 2017), and gAnswer (Hu et al., 2017), respectively. A direction closely coupled with effective feedback is the interpretability of QA models, that is also essential to improving trust and satisfaction (Wu et al., 2020; Abujabal et al., 2017a). This section is for experts and we will discuss potential limitations and open challenges.

A key aspect of mixed-initiative systems (Radlinski and Craswell, 2017) is to be able to ask clarifications. This ability is essential QA systems, especially for handling ambiguity and facilitating better question understanding. Most of the work in this domain has been driven by extracting tasks from open QA forums  (Braslavski et al., 2017; Rao and Daumé III, 2018; Xu et al., 2019a).

A detailed schedule for our proposed half-day tutorial (three hours plus breaks), which is aimed to meet a high-quality presentation within the chosen time period, is as follows:

Support for attendees. We will provide the attendees with a link to the tutorial slides and preparatory reading material. Upon acceptance, we will prepare a webpage with all updated information and the necessary reading material, well in time before the conference.