Search applications often display shortened sentences which must contain certain query terms and must fit within the space constraints of a user interface. This work introduces a new transition-based sentence compression technique developed for such settings. Our method constructs length and lexically constrained compressions in linear time, by growing a subgraph in the dependency parse of a sentence. This approach achieves a 4x speed up over baseline ILP compression techniques, and better reconstructs gold shortenings under constraints. Such efficiency gains permit constrained compression of multiple sentences, without unreasonable lag. 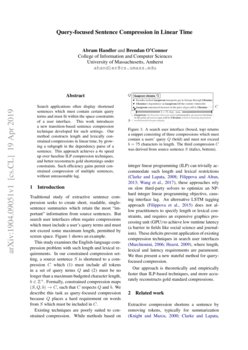 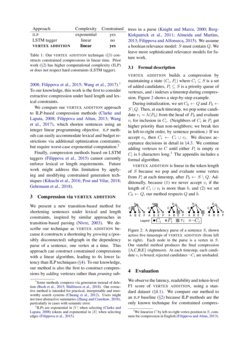 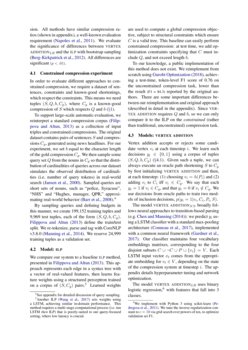 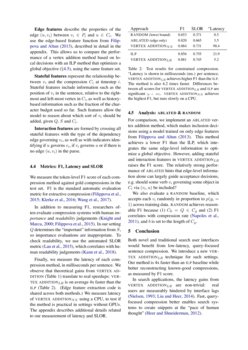 Traditional study of extractive sentence compression seeks to create short, readable, single-sentence summaries which retain the most “important” information from source sentences. But search user interfaces often require compressions which must include a user’s query terms and must not exceed some maximum length, permitted by screen space. Figure 1 shows an example.

This study examines the English-language compression problem with such length and lexical requirements. In our constrained compression setting, a source sentence S is shortened to a compression C which (1) must include all tokens in a set of query terms Q and (2) must be no longer than a maximum budgeted character length, b∈Z+. Formally, constrained compression maps (S,Q,b)→C, such that C respects Q and b. We describe this task as query-focused compression because Q places a hard requirement on words from S which must be included in C.

Existing techniques are poorly suited to constrained compression. While methods based on integer linear programming (ILP) can trivially accommodate such length and lexical restrictions

Extractive compression shortens a sentence by removing tokens, typically for summarization Knight and Marcu (2000); Clarke and Lapata (2008); Filippova et al. (2015); Wang et al. (2017).111Some methods compress via generation instead of deletion Rush et al. (2015); Mallinson et al. (2018). Our extractive method is intended for practical, interpretable and trustworthy search systems Chuang et al. (2012). Users might not trust abstractive summaries Zhang and Cranshaw (2018), particularly in cases with semantic error. To our knowledge, this work is the first to consider extractive compression under hard length and lexical constraints.

We present a new transition-based method for shortening sentences under lexical and length constraints, inspired by similar approaches in transition-based parsing Nivre (2003). We describe our technique as vertex addition because it constructs a shortening by growing a (possibly disconnected) subgraph in the dependency parse of a sentence, one vertex at a time. This approach can construct constrained compressions with a linear algorithm, leading to 4x lower latency than ILP techniques (§4). To our knowledge, our method is also the first to construct compressions by adding vertexes rather than pruning subtrees in a parse Knight and Marcu (2000); Berg-Kirkpatrick et al. (2011); Almeida and Martins (2013); Filippova and Alfonseca (2015). We assume a boolean relevance model: S must contain Q. We leave more sophisticated relevance models for future work.

vertex addition builds a compression by maintaining a state (Ci,Pi) where Ci⊆S is a set of added candidates, Pi⊆S is a priority queue of vertexes, and i indexes a timestep during compression. Figure 2 shows a step-by-step example.

During initialization, we set C0←Q and P0←S∖Q. Then, at each timestep, we pop some candidate vi=h(P0) from the head of P0 and evaluate vi for inclusion in Ci. (Neighbors of Ci in Pi get higher priority than non-neighbors; we break ties in left-to-right order, by sentence position.) If we accept vi, then Ci←Ci∪vi. We discuss acceptance decisions in detail in §4.3. We continue adding vertexes to C until either Pi is empty or Ci is b characters long.333We linearize C by left-to-right vertex position in S, common for compression in English Filippova and Altun (2013). The appendix includes a formal algorithm.

vertex addition is linear in the token length of S because we pop and evaluate some vertex from Pi at each timestep, after P0←S∖Q. Additionally, because (1) we never accept vi if the length of Ci∪vi is more than b, and (2) we set C0←Q, our method respects Q and b.

We observe the latency, readability and token-level F1 score of vertex addition, using a standard dataset (§4.1). We compare our method to an ilp baseline (§2) because ILP methods are the only known technique for constrained compression. All methods have similar compression ratios (shown in appendix), a well-known evaluation requirement Napoles et al. (2011). We evaluate the significance of differences between vertex additionLR and the ilp with bootstrap sampling Berg-Kirkpatrick et al. (2012). All differences are significant (p<.01).

To support large-scale automatic evaluation, we reinterpret a standard compression corpus Filippova and Altun (2013) as a collection of input triples and constrained compressions. The original dataset contains pairs of sentences S and compressions Cg, generated using news headlines. For our experiment, we set b equal to the character length of the gold compression Cg. We then sample some query set Q from the nouns in Cg so that the distribution of cardinalities of queries across our dataset simulates the observed distribution of cardinalities (i.e. number of query tokens) in real-world search Jansen et al. (2000). Sampled queries are short sets of nouns, such as “police, Syracuse”, “NHS” and “Hughes, manager, QPR,” approximating real-world behavior Barr et al. (2008).444See appendix for detailed discussion of query sampling.

We compare our system to a baseline ilp method, presented in Filippova and Altun (2013)

. This approach represents each edge in a syntax tree with a vector of real-valued features, then learns feature weights using a structured perceptron trained on a corpus of

(S,Cg) pairs.555Another ILP Wang et al. (2017) sets weights using a LSTM, achieving similar in-domain performance. This method requires a multi-stage computational process (i.e. run LSTM then ILP) that is poorly-suited to our query-focused setting, where low latency is crucial. Learned weights are used to compute a global compression objective, subject to structural constraints which ensure C is a valid tree. This baseline can easily perform constrained compression: at test time, we add optimization constraints specifying that C must include Q, and not exceed length b.

To our knowledge, a public implementation of this method does not exist. We reimplement from scratch using Gurobi Optimization (2018), achieving a test-time, token-level F1 score of 0.76 on the unconstrained compression task, lower than the result (F1 = 84.3) reported by the original authors. There are some important differences between our reimplementation and original approach (described in detail in the appendix). Since vertex addition requires Q and b, so we can only compare it to the ILP on the constrained (rather than traditional, unconstrained) compression task.

Vertex addition accepts or rejects some candidate vertex vi at each timestep i. We learn such decisions yi∈{0,1} using a corpus of tuples (S,Q,b,Cg) (§4.1). Given such a tuple, we can always execute an oracle path shortening S to Cg by first initializing vertex addition and then, at each timestep: (1) choosing vi=h(Pi) and (2) adding vi to Ci iff vi∈Cg. We say that each yi=1 if vi∈Cg, and that yi=0 if vi∉Cg. We use decisions from oracle paths to train two models of inclusion decisions, p(yi=1|vi,Ci,Pi,S).

using a LSTM classifier with a standard max-pooling architecture

Conneau et al. (2017), implemented with a common neural framework Gardner et al. (2017). Our classifier maintains four vocabulary embeddings matrixes, corresponding to the four disjoint subsets C∪¬C∪P∪{vi}=V. Each LSTM input vector xt comes from the appropriate embedding for vt∈V, depending on the state of the compression system at timestep i

666We implement with Python 3 using scikit-learn Pedregosa et al. (2011). We tune the inverse regularization constant to c=10 via grid search over powers of ten, to optimize validation set F1. with features that fall into 3 classes.

Edge features describe the properties of the edge (u,vi) between vi∈Pi and u∈Ci. We use the edge-based feature function from Filippova and Altun (2013), described in detail in the appendix. This allows us to compare the performance of a vertex addition method based on local decisions with an ILP method that optimizes a global objective (§4.5), using the same feature set.

Stateful features represent the relationship between vi and the compression Ci at timestep i. Stateful features include information such as the position of vi in the sentence, relative to the right-most and left-most vertex in Ci, as well as history-based information such as the fraction of the character budget used so far. Such features allow the model to reason about which sort of vi should be added, given Q, S and Ci.

Interaction features are formed by crossing all stateful features with the type of the dependency edge governing vi, as well as with indicators identifying if u governs vi, if vi governs u or if there is no edge (u,vi) in the parse.

We measure the token-level F1 score of each compression method against gold compressions in the test set. F1 is the standard automatic evaluation metric for extractive compression

Finally, we measure the latency of each compression method, in milliseconds per sentence. We observe that theoretical gains from vertex addition (Table 1) translate to real speedups: vertex additionLR is on average 4x faster than the ilp (Table 2

). (Edge feature extraction code is shared across both methods.) We measure latency of

vertex additionNN using a CPU, to test if the method is practical in settings without GPUs. The appendix describes additional details related to our measurement of latency and SLOR.

For comparison, we implement an ablated vertex addition method, which makes inclusion decisions using a model trained on only edge features from Filippova and Altun (2013). This method achieves a lower F1 than the ILP, which integrates the same edge-level information to optimize a global objective. However, adding stateful and interaction features in vertex additionLR raises the F1 score. The relatively strong performance of ablated hints that edge-level information alone can largely guide acceptance decisions, e.g. should some verb vi governing some object in Ci via (vi,u) be included?

We also evaluate a random baseline, which accepts each vi randomly in proportion to p(yi=1) across training data. random achieves reasonable F1 because (1) C0=Q∈Cg and (2) F1 correlates with compression rate Napoles et al. (2011), and b is set to the length of Cg.

Both novel and traditional search user interfaces would benefit from low-latency, query-focused sentence compression. We introduce a new vertex additionLR technique for such settings. Our method is 4x faster than an ilp baseline while better reconstructing known-good compressions, as measured by F1 score.

We formally present the vertex addition compression algorithm, using notation defined in the paper. ℓ linearizes a vertex set, based on left-to-right position in S. |P| indicates the number of tokens in the priority queue.

a.2 Neural network tuning and optimization

We learn network weights for vertex additionNN by minimizing cross-entropy loss with AdaGrad Duchi et al. (2011). The hyperparameters of the network are: the learning rate, the dimensionality of embeddings, the weight decay parameter, and the hidden state size of the LSTM. We tune hyperparameters via random search Bergstra and Bengio (2012)

, selecting parameters which achieve highest accuracy in predicting oracle decisions for the validation set. We train for 10 epochs, and use parameters from the best-performing ecoch (by validation accuracy) at test time.

a.3 Reimplementation of Filippova and Altun (2013)

We assess convergence of the ILP by examining validation F1 score on the traditional sentence compression task. We terminate training after six epochs, when F1 score stabilizes (i.e. changes by fewer than 10−3 points).

a.4 Implementation of SLOR

We use a 3-gram language model trained on the training set of the Filippova and Altun (2013) corpus. We implement with KenLM Heafield (2011). Because compression often results in shortenings where the first token is not capitalized (e.g. a compression which begins with the third token in S) we ignore case when calculating language model probabilities.

To measure latency, for each technique, we sample 100,000 sentences with replacement from the test test. We observe the mean time per sentence using Python’s built-in timeit module. We measure with an Intel Xeon processor with a clock rate of 2.80GHz.