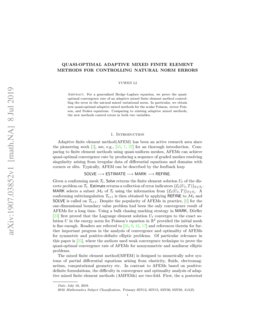 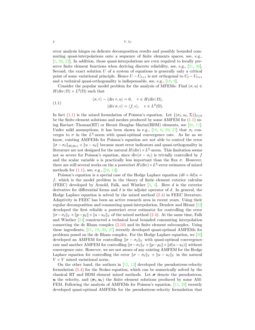 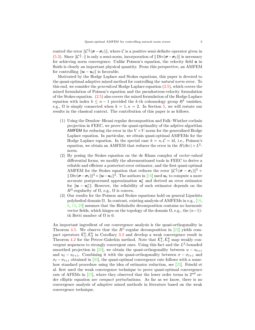 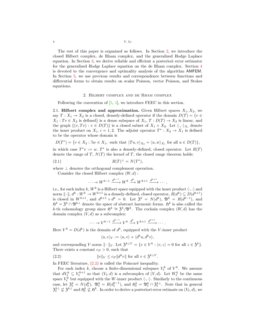 For the planar elasticity equation, we prove the uniform convergence and...
Yuwen Li, et al. ∙

On a mixed FEM and a FOSLS with H^-1 loads

It is well known that the usual mixed method for solving the biharmonic ...
Baiju Zhang, et al. ∙

In this paper we conduct a priori and a posteriori error analysis of the...
Susanne C. Brenner, et al. ∙

Adaptive finite element method(AFEM) has been an active research area since the pioneering work [5], see, e.g., [45, 7, 37] for an thorough introduction. Comparing to finite element methods using quasi-uniform meshes, AFEMs can achieve quasi-optimal convergence rate by producing a sequence of graded meshes resolving singularity arising from irregular data of differential equations and domains with corners or slits. Typically, AFEM can be described by the feedback loop

Given a conforming mesh Tℓ, Solve returns the finite element solution Uℓ of the discrete problem on Tℓ. Estimate returns a collection of error indicators {Eℓ(Uℓ,T)}T∈Tℓ. MARK selects a subset Mℓ of Tℓ using the information from {Eℓ(Uℓ,T)}T∈Tℓ. A conforming subtriangulation Tℓ+1 is then obtained by applying REFINE to Mℓ and SOLVE is called on Tℓ+1. Despite the popularity of AFEMs in practice, [6] for the one-dimensional boundary value problem had been the only convergence result of AFEMs for a long time. Using a bulk chasing marking strategy in MARK, Dörfler [23] first proved that the Lagrange element solution Uℓ converges to the exact solution U in the energy norm for Poisson’s equation in R2 provided the initial mesh is fine enough. Readers are referred to [33, 9, 42, 17] and references therein for further important progress in the analysis of convergence and optimality of AFEMs for symmetric and positive-definite elliptic problems. Of particular relevance in this paper is [25], where the authors used weak convergence technique to prove the quasi-optimal convergence rate of AFEMs for nonsymmetric and nonlinear elliptic problems.

[1, 39, 22]. In addition, those quasi-interpolations are even required to locally preserve finite element functions when deriving discrete reliability, see, e.g., [21, 46]. Second, the exact solution U of a system of equations is generally only a critical point of some variational principle. Hence U−Uℓ+1 is not orthogonal to Uℓ−Uℓ+1 and a technical quasi-orthogonality is indispensable, see, e.g., [18, 8].

Consider the popular model problem for the analysis of MFEMs: Find (σ,u)∈H(div;Ω)×L2(Ω) such that

In fact (1.1) is the mixed formulation of Poisson’s equation. Let {(σℓ,uℓ,Tℓ)}ℓ≥0 be the finite element solutions and meshes produced by some AMFEM for (1.1) using Raviart–Thomas(RT) or Brezzi–Douglas–Marini(BDM) elements, see [38, 11]. Under mild assumptions, it has been shown in e.g., [18, 8, 29, 27] that σℓ converges to σ in the L2-norm with quasi-optimal convergence rate. As far as we know, existing AMFEMs for Poisson’s equation are not able to control the error ∥σ−σℓ∥H(div)+∥u−uℓ∥ because most error indicators and quasi-orthogonality in literature are not designed for the natural H(div)×L2-norm. This limitation seems not so severe for Poisson’s equation, since div(σ−σℓ) is trivially controlled by f and the scalar variable u is practically less important than the flux σ. However, there are still several works on the a posteriori H(div)×L2-error estimates of mixed methods for (1.1), see, e.g., [10, 14].

Poisson’s equation is a special case of the Hodge Laplace equation (dδ+δd)u=f, which is the model problem in the theory of fintie element exterior calculus (FEEC) developed by Arnold, Falk, and Winther [3, 4]. Here d is the exterior derivative for differential forms and δ is the adjoint operator of d. In general, the Hodge Laplace equation is solved by the mixed method (2.4) in FEEC literature. Adaptivity in FEEC has been an active research area in recent years. Using their regular decomposition and commuting quasi-interpolation, Demlow and Hirani [22] developed the first reliable a posteriori error estimator for controlling the error ∥σ−σℓ∥V+∥p−pℓ∥+∥u−uℓ∥V of the mixed method (2.4). At the same time, Falk and Winther [24] constructed a technical local bounded commuting interpolation connecting the de Rham complex (2.10) and its finite element subcomplex. Using these ingredients, [21, 19, 30, 27] recently developed quasi-optimal AMFEMs for problems posed on the de Rham complex. For the Hodge Laplace equation, we [30] developed an AMFEM for controlling ∥σ−σℓ∥V with quasi-optimal convergence rate and another AMFEM for controlling ∥σ−σℓ∥V+∥p−pℓ∥+∥d(u−uℓ)∥ without convergence rate. However, we are not aware of any existing AMFEM for the Hodge Laplace equation for controlling the error ∥σ−σℓ∥V+∥u−uℓ∥V in the natural V×V mixed variational norm.

On the other hand, the authors in [12, 13] developed the pseudostress-velocity formulation (5.4) for the Stokes equation, which can be numerically solved by the classical RT and BDM element mixed methods. Let σ denote the pseudostress, u the velocity, and (σℓ,uℓ) the finite element solutions produced by some AMFEM. Following the analysis of AMFEMs for Poisson’s equation, [15, 28] recently developed quasi-optimal AMFEMs for the pseudostress-velocity formulation that control the error ∥C12(σ−σℓ)∥, where C is a positive semi-definite operator given in (5.3). Since ∥C12⋅∥ is only a semi-norm, incorporation of ∥Div(σ−σℓ)∥ is necessary for achieving norm convergence. Unlike Poisson’s equation, the velocity field u in fluids is clearly an important physical quantity. From this perspective, an AMFEM for controlling ∥u−uℓ∥ is favorable.

Motivated by the Hodge Laplace and Stokes equations, this paper is devoted to the quasi-optimal adaptive mixed method for controlling the natural norm error. To this end, we consider the generalized Hodge Laplace equation (2.5), which covers the mixed formulation of Poisson’s eqaution and the pseudostress-velocity formulation of the Stokes equation. (2.5) also covers the mixed formulation of the Hodge Laplace equation with index k≤n−1 provided the k-th cohomology group Hk vanishes, e.g., Ω is simply connected when k=1,n=2. In Section 5, we will restate our results in the classical context. The contribution of this paper is as follows.

The rest of this paper is organized as follows. In Section 2, we introduce the closed Hilbert complex, de Rham complex, and the generalized Hodge Laplace equation. In Section 3, we derive reliable and efficient a posteriori error estimator for the generalized Hodge Laplace equation on the de Rham complex. Section 4 is devoted to the convergence and optimality analysis of the algorithm AMFEM. In Section 5, we use previous results and correspondence between functions and differential forms to obtain results on scalar Poisson, vector Poisson, and Stokes equations.

Following the convention of [3, 4], we introduce FEEC in this section.

in which case T∗v:=w. T∗ is also a densely-defined, closed operator. Let R(T) denote the range of T, N(T) the kernel of T, the closed range theorem holds:

i.e., for each index k, Wk is a Hilbert space equipped with the inner product ⟨⋅,⋅⟩ and norm ∥⋅∥, dk:Wk→Wk+1 is a densely-defined, closed operator, R(dk)⊆D(dk+1) is closed in Wk+1, and dk+1∘dk=0. Let Zk=N(dk), Bk=R(dk−1), and Hk=Zk∩Bk⊥ denote the space of abstract harmonic forms. Hk is also called the k-th cohomology group since Hk≅Zk/Bk. The cochain complex (W,d) has the domain complex (V,d) as a subcomplex:

Here Vk=D(dk) is the domain of dk, equipped with the V-inner product

In FEEC literature, (2.2) is called the Poincaré inequality.

For each index k, choose a finite-dimensional subspace Vkℓ of Vk. We assume that dVkℓ⊆Vk+1ℓ so that (Vℓ,d) is a subcomplex of (V,d). Let Wkℓ be the same space Vkℓ but equipped with the W-inner product ⟨⋅,⋅⟩. Similarly to the continuous case, let Zkℓ=N(dkℓ), Bkℓ=R(dk−1ℓ), and Hkℓ=Bkℓ∩Zk⊥ℓ. Note that in general Zk⊥ℓ⊈Zk⊥ and Hkℓ⊈Hk. In order to derive a posteriori error estimate on (Vℓ,d), we assume the existence of a bounded cochain projection πℓ from (V,d) to (Vℓ,d). To be precise, for each index k, πkℓ maps Vk onto Vkℓ, πkℓ|Vkℓ=id, dkπkℓ=πk+1ℓdk, and ∥πkℓ∥V=∥πkℓ∥Vk→Vkℓ<∞ is uniformly bounded with respect to the discretization parameter ℓ. It has been shown in [4] that the discrete Poincaré inequality holds:

For each index k, let d∗k denote the adjoint operator of dk−1:Wk−1→Wk and V∗k=D(d∗k). Throughout the rest of this paper, we may drop the superscript or subscript k provided no confusion arises. On the closed Hilbert complex (W,d), Arnold, Falk and Winther [4] considered the abstract Hodge Laplace equation

where f∈Wk and u∈Vk∩V∗k satisfy the compatibility condition f,u⊥Hk. Note that u∈Vk∩V∗k and it is difficult to construct finite element subspaces of Vk∩V∗k. Therefore, the authors in [4] considered the mixed formulation: Find (σ,u,q)∈Vk−1×Vk×Hk, such that

In general, Hkℓ⊈Hk and (2.4) is a nonconforming method . For the sake of simplicity, we assume the k-th cohomology group Hk={0} and consider the generalized Hodge Laplacian problem: Find (σ,u)∈Vk−1×Vk, such that

where C:Wk−1→Wk−1 is a self-adjoint, positive semi-definite, continuous linear operator. C is not necessarily positive definite with respect to ⟨⋅,⋅⟩ and ∥C12⋅∥=⟨C⋅,⋅⟩12 may not be define a norm on Wk−1. We assume that there exists a constant CC>0 with

Let B(σ,u;τ,v)=⟨Cσ,τ⟩−⟨dτ,u⟩+⟨dσ,v⟩+⟨du,dv⟩. The next theorem shows that B satisfies the continuous and discrete inf-sup condition, which implies the well-posedness of (2.5) and (2.7). The proof is the same as Theorem 3.2 in [4].

Assume Hk={0}. There exists a constant γ>0 depending only on cP,CC, such that

for all ξ∈Vk−1,w∈Vk. In addition, there exists a constant γℓ>0 depending only on cP,CC,∥πℓ∥V, such that

Combining it with the discrete inf-sup condition in Theorem 2.1 completes the proof. ∎

The de Rham complex is a canonical example of the closed Hilbert complex. Let Ω⊂Rn be a bounded Lipschitz domain. For index 0≤k≤n, let Λk(Ω) denote the space of all smooth k-forms ω which can be uniquely written as

The exterior derivative d=dk:Λk(Ω)→Λk+1(Ω) is given by

is an example of the closed Hilbert complex (W,d). The L2-de Rham complex [corresponds to (V,d)] is

In order to characterize the adjoint of d, we need the Hodge star operator ⋆:L2Λk(Ω)→L2Λn−k(Ω) determined by ∫Ωω∧μ=⟨⋆ω,μ⟩ for all μ∈L2Λn−k(Ω). The coderivative δ:Λk(Ω)→Λk−1(Ω) is then determined by ⋆δω=(−1)kd⋆ω. d and δ are related by the integrating by parts formula

where the trace operator tr on ∂Ω is the pullback for differential forms induced by the inclusion ∂Ω↪¯¯¯¯Ω. If Ω is replaced by T in (2.11), tr denotes the trace on ∂T by abuse of notation. We make use of the spaces H∗Λk(Ω)=⋆HΛn−k(Ω) and ˚HΛk(Ω)={ω∈HΛk(Ω):trω=0 on ∂Ω}. The next lemma characterizes the adjoint operator of d.

Let T0≤T1≤⋯≤Tℓ≤⋯ be a sequence of nested conforming simplicial triangulations of Ω, where Tℓ≤Tℓ+1 means Tℓ+1 is a refinement of Tℓ. For T∈Tℓ, let |T| denote the volume of T and hT:=|T|1n. We assume that {Tℓ}ℓ≥0 is shape regular, namely,

where rT and ρT are radii of circumscribed and inscribed spheres of the simplex T, respectively. Let PrΛk(T) denote the space of k-forms on T with polynomial coefficients of degree ≤r. Let

where κ:L2Λk(Ω)→L2Λk−1(Ω) is the interior product given by

Other spaces Vjℓ with j≠k,k−1 are chosen in the same way. In Rn, there are 2n−1 different discrete subcomplexes (Vℓ,d) on a simplicial triangulation Tℓ.

To derive discrete upper bounds on the de Rham complex, we need the local V-bounded cochain projection πℓ developed by Falk and Winther [24]. The existence of πℓ implies the discrete inf-sup condition by Theorem 2.1.

Properties (3.1a) and (3.1b) are given by Falk and Winther in [24]. Let Iℓ:HΛk(Ω)→Vkℓ be the interpolation given by applying the Scott–Zhang interpolation (cf. [41]) on Tℓ to each coefficient of ω∈HΛk(Ω). It follows from the property (3.1a) and the same property of Iℓ that

by the Bramble–Hilbert lemma. In addition, it is well-known that

Combining it with the trace inequality verifies h−12T∥tr(v−πkℓv)∥∂T≲|v|H1(DT). ∎

Using (3.2) and the bounded overlapping property of DT, we obtain