This paper studies quasi-Newton methods for solving strongly-convex-strongly-concave saddle point problems (SPP). We propose a variant of general greedy Broyden family update for SPP, which has explicit local superlinear convergence rate of 𝒪((1-1/nκ^2)^k(k-1)/2), where n is dimensions of the problem, κ is the condition number and k is the number of iterations. The design and analysis of proposed algorithm are based on estimating the square of indefinite Hessian matrix, which is different from classical quasi-Newton methods in convex optimization. We also present two specific Broyden family algorithms with BFGS-type and SR1-type updates, which enjoy the faster local convergence rate of 𝒪((1-1/n)^k(k-1)/2). 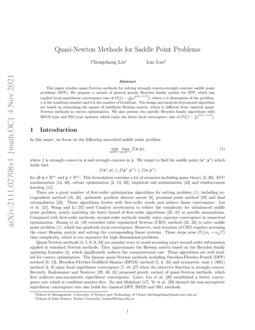 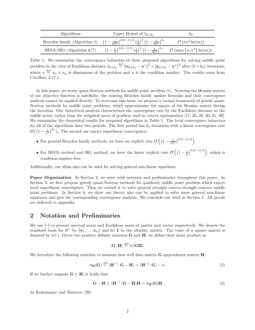 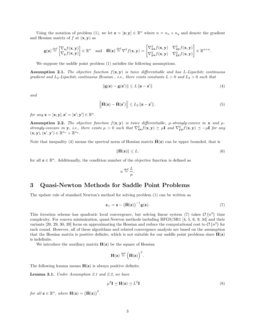 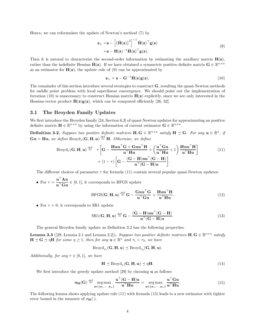 The ℓ_1-regularized sparse model has been popular in machine learning so...
Jianqiao Wangni, et al. ∙

In this paper, we focus on the following smoothed saddle point problem

where f is strongly-convex in x and strongly-concave in y. We target to find the saddle point (x∗,y∗) which holds that

. This formulation contains a lot of scenarios including game theory

In this paper, we study quasi-Newton methods for saddle point problem (1). Noticing the Hessian matrix of our objective function is indefinite, the existing Broyden family update formulas and their convergence analysis cannot be applied directly. To overcome this issue, we propose a variant framework of greedy quasi-Newton methods for saddle point problems, which approximates the square of the Hessian matrix during the iteration. Our theoretical analysis characterizes the convergence rate by the Euclidean distance to the saddle point, rather than the weighted norm of gradient used in convex optimization [29, 30, 31, 20, 39, 17]. We summarize the theoretical results for proposed algorithms in Table 1. The local convergence behaviors for all of the algorithms have two periods. The first period has k0 iterations with a linear convergence rate O((1−1κ2)k0). The second one enjoys superlinear convergence:

Additionally, our ideas also can be used for solving general non-linear equations.

In Section 2, we start with notation and preliminaries throughout this paper. In Section 3, we first propose greedy quasi-Newton methods for quadratic saddle point problem which enjoys local superlinear convergence. Then we extend it to solve general strongly-convex-strongly-concave saddle point problems. In Section 4, we show our theory also can be applied to solve more general non-linear equations and give the corresponding convergence analysis. We conclude our work in Section 5. All proofs are deferred to appendix.

to present spectral norm and Euclidean norm of matrix and vector respectively. We denote the standard basis for

be the identity matrix. The trace of a square matrix is denoted by

tr(⋅). Given two positive definite matrices G and H, we define their inner product as

We introduce the following notation to measure how well does matrix G approximate matrix H:

If we further suppose G⪰H, it holds that

Using the notation of problem (1), we let z=[x;y]∈Rn where n=nx+ny and denote the gradient and Hessian matrix of f at (x,y) as

We suppose the saddle point problem (1) satisfies the following assumptions.

The objective function f(x,y) is twice differentiable, μ-strongly-convex in x and μ-strongly-concave in y, i.e., there exists μ>0 such that ∇2xxf(x,y)⪰μI and ∇2yyf(x,y)⪯−μI for any (x,y),(x′,y′)∈Rnx×Rny.

Note that inequality (4) means the spectral norm of Hessian matrix ^H(z) can be upper bounded, that is

for all z∈Rn. Additionally, the condition number of the objective function is defined as

This iteration scheme has quadratic local convergence, but solving linear system (7) takes O(n3) time complexity. For convex minimization, quasi-Newton methods including BFGS/SR1 [6, 5, 34, 4, 9] and their variants [20, 39, 29, 30] focus on approximating the Hessian and reduce the computational cost to O(n2) for each round. However, all of these algorithms and related convergence analysis are based on the assumption that the Hessian matrix is positive definite, which is not suitable for our saddle point problems since ^H(z) is indefinite.

Hence, we can reformulate the update of Newton’s method (7) by

Then it is natural to characterize the second-order information by estimating the auxiliary matrix H(z), rather than the indefinite Hessian ^H(z). If we have obtained a symmetric positive definite matrix G∈Rn×n as an estimator for H(z), the update rule of (9) can be approximated by

The remainder of this section introduce several strategies to construct G, resulting the quasi-Newton methods for saddle point problem with local superlinear convergence. We should point out the implementation of iteration (10) is unnecessary to construct Hessian matrix ^H(z) explicitly, since we are only interested in the Hessian-vector product ^H(z)g(z), which can be computed efficiently [26, 32].

We first introduce the Broyden family [24, Section 6.3] of quasi-Newton updates for approximating an positive definite matrix H∈Rn×n by using the information of current estimator G∈Rn×n.

The general Broyden family update as Definition 3.2 has the following properties.

The following lemma shows applying update rule (11) with formula (15) leads to a new estimator with tighter error bound in the measure of σH(⋅).

Suppose two positive definite matrices H,G∈Rn×n satisfy H⪯G⪯κ2H. Let G+=Broydτ(G,H,uH(G)), then for any τ∈[0,1], we have

For specific Broyden family updates BFGS and SR1 shown in (12) and (13), we can replace (15) by scaling greedy direction [20], which leads to a better convergence result. Concretely, for BFGS method, we first find L such that G−1=L⊤L, where L is an upper triangular matrix. This step can be implemented with O(n2) complexity [20, Proposition 15]. We present the subroutine for factorizing G−1 in Algorithm 1 and give its detailed implementation in Appendix B.

Then we use direction L⊤~uH(L) for BFGS update, where

For SR1 method, we choose the direction by

Applying the BFGS update rule (12) with formula (17), we obtain a condition-number-free result as follows.

Suppose two positive definite matrices H,G∈Rn×n satisfy H⪯G. Let G+=BFGS(G,H,L⊤~uH(L)), where L is an upper triangular matrix such that G−1=L⊤L. Then we have

Applying the SR1 update rule (13) with formula (18), we also hold a condition-number-free result.

Then we consider solving quadratic saddle point problem of the form

We present the detailed procedure of greedy quasi-Newton methods for quadratic saddle point problem by using Broyden family update, BFGS update and SR1 update in Algorithm 2, 3 and 4 respectively. We define λk as the Euclidean distance from zk to the saddle point z∗ for our convergence analysis, that is

The definition of λk in this paper is different from the measure used in convex optimization [29, 20]111In later section, we will see the measure λkdef=∥zk−z∗∥ is suitable to convergence analysis of quasi-Newton methods for saddle point problems., but it also holds the similar property as follows.

Assume we have ηk≥1 and Gk∈Rn×n such that H⪯Gk⪯ηkH for Algorithm 2, 3 and 4, then we have

The next theorem states the assumptions of Lemma 3.7 always holds with ηk=κ2≥1, which means λk converges to 0 linearly.

Lemma 3.7 also implies superlinear convergence can be obtained if there exists ηk which converges to 1. Applying Lemma 3.4, 3.5 and 3.6, we can show it holds for proposed algorithms.

In this section, we consider the general saddle point problem

where f(x,y) satisfies Assumption 2.1 and 2.2. We target to propose quasi-Newton methods for solving above problem with local superlinear convergence and O(n2) time complexity for each iteration.

Combining Lemma 3.1 and 3.10, we achieve the following properties of H(z), which analogizes the strongly self-concordance in convex optimization [29].

Under Assumption 2.1 and 2.2, the auxiliary matrix operator H(⋅) satisfies

Let z,z′∈Rn and r=∥z′−z∥. Suppose the objective function f satisfies Assumption 2.1 and 2.2, then the auxiliary matrix operator H(⋅) holds that

Different with the quadratic case, auxiliary matrix H(z) is not fixed for general saddle point problem. Based on the smoothness of H(z), we apply Lemma 3.11.1 to generalize Corollary 3.3 as follows.

for some η≥1. We additionally define z+∈Rn and r=∥z+−z∥, then we have

with ~Gk=(1+Mrk)Gk and rk=∥zk+1−zk∥. Similarly, we can also achieve Gk+1 by such ~Gk for specific BFGS and SR1 update. Combining iteration (10) with (33), we propose the quasi-Newton methods for general strongly-convex-strongly-concave saddle point problems. The details is shown in Algorithm 5, 6 and 7 for greedy Broyden family, BFGS and SR1 updates respectively.

We turn to consider building the convergence guarantee for algorithms proposed in Section 3.3.1. We start from the following lemma which is useful to further analysis.

Suppose objective function f satisfies Assumption 2.1 and 2.2 and z∗=[x∗;y∗] is its saddle point, then we have

We introduce the following notations to simplify the presentation. We let {zk} be the sequence generated from Algorithm 5, 6 or 7 and denote

We still use Euclidean distance λkdef=∥zk−z∗∥ for analysis and establish the relationship between λk and λk+1, which is shown in Lemma 3.14.

for some ηk≥1. Then we have

Rodomanov and Nesterov [29, Lemma 4.3] derive a result similar to Lemma 3.14 for minimizing the strongly-convex function ^f(⋅), but depends on the different measure λ^f(⋅)def=⟨∇^f(⋅),(∇2^f(⋅))−1∇^f(⋅)⟩.222The original notations of Rodomanov and Nesterov [29] is minimizing the strongly-convex function f(⋅) and establishing the convergence result by λf(⋅)def=⟨∇f(⋅),(∇2f(⋅))−1∇f(⋅)⟩. To avoid ambiguity, we use notations ^f(⋅) and λ^f to describe their work in this paper. Note that our algorithms are based on the iteration rule

Compared with quasi-Newton methods for convex optimization, there exists an additional term ^Hk between G−1k and gk, which leads to the convergence analysis based on λkdef=∥zk−z∗∥ is so difficult. Fortunately, we find directly using Euclidean distance λk makes sure everything goes smoothly.

For further analysis, we also denote

Then we establish linear convergence for the first period of iterations, which can be viewed as the generalization of Theorem 3.8. Note that the following result holds for all Algorithm 5, 6 and 7.

Using Algorithm 5, 6 and 7 with M=2κ2L2/L and G0=L2I, we suppose the initial point z0 is sufficiently close to the saddle point such that

Then we analyze how does σk change after one iteration to show the local superlinear convergence for greedy Broyden family method (Algorithm 5) and greedy BFGS method (Algorithm 6). Recall that σk is defined in (39) to measure how well does the matrix Gk approximate the auxiliary matrix Hk.

Solving general strongly-convex strongly-concave saddle point problem (1) under Assumption 2.1 and 2.2 by proposed greedy quasi-Newton algorithms, we have the following results for σk: