Quasi-likelihood analysis of an ergodic diffusion plus noise

We consider adaptive maximum-likelihood-type estimators and adaptive Bayes-type ones for discretely observed ergodic diffusion processes with observation noise whose variance is constant. The quasi-likelihood functions for the diffusion and drift parameters are introduced and the polynomial-type large deviation inequalities for those quasi-likelihoods are shown to see the convergence of moments for those estimators. 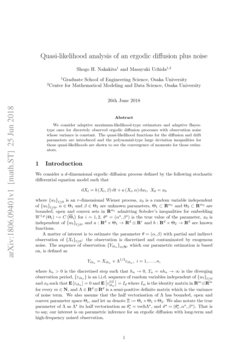 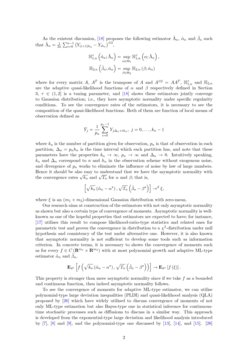 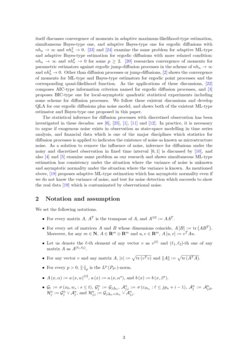 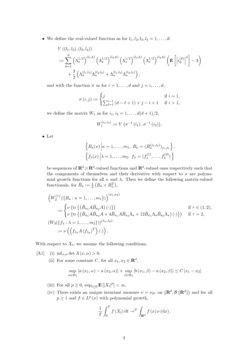 Inference for ergodic diffusions plus noise

is a random variable independent of

A matter of interest is to estimate the parameter θ=(α,β) with partial and indirect observation of {Xt}t≥0: the observation is discretised and contaminated by exogenous noise. The sequence of observation {Yihn}i=0,…,n, which our parametric estimation is based on, is defined as

where hn>0 is the discretisation step such that hn→0 and Tn=nhn→∞, {εihn}i=0,…,n is an i.i.d. sequence of random variables independent of {wt}t≥0 and x0 such that Eθ⋆[εihn]=0 and Varθ⋆(εihn)=Id where Im

is the identity matrix in

Rm⊗Rm for every m∈N, and Λ∈Rd⊗Rd is a positive semi-definite matrix which is the variance of noise term. We also assume that the half vectorisation of Λ has bounded, open and convex parameter space Θε, and let us denote Ξ:=Θε×Θ1×Θ2. We also notate the true parameter of Λ as Λ⋆, its half vectorisation as θ⋆ε=vechΛ⋆, and ϑ⋆=(θ⋆ε,α⋆,β⋆). That is to say, our interest is on parametric inference for an ergodic diffusion with long-term and high-frequency noised observation. One concrete example is the wind velocity data provided by NWTC Information Portal (2018) whose observation is contaminated by exogenous noise with statistical significance according to the test for noise detection (Nakakita and Uchida, 2018b).

As the existent discussion, Nakakita and Uchida (2018b) propose the following estimator ^Λn, ^αn and ^βn such that

where for every matrix A, AT is the transpose of A and A⊗2=AAT, Hτ1,n and H2,n are the adaptive quasi-likelihood functions of α and β respectively defined in Section 3, τ∈(1,2] is a tuning parameter, and Nakakita and Uchida (2018b) show these estimators are asymptotically normal and especially the drift one is asymptotically efficient. To obtain the convergence rates of the estimators, it is necessary to see the composition of the quasi-likelihood functions. Both of them are function of local means of observation defined as

where kn is the number of partition given for observation, pn is that of observation in each partition, Δn=pnhn is the time interval which each partition has, and note that these parameters have the properties kn→∞, pn→∞ and Δn→0. Intuitively speaking, kn and Δn correspond to n and hn in the observation scheme without exogenous noise, and divergence of pn

works to eliminate the influence of noise by law of large numbers. Hence it should be also easy to understand that we have the asymptotic normality with the convergence rates

The statistical inference for diffusion processes with discretised observation has been investigated in these decades: see Florens-Zmirou (1989), Yoshida (1992), Bibby and Sørensen (1995), Kessler (1995, 1997). In practice, it is necessary to argue whether exogenous noise exists in observation, and it has been pointed out that the observational noise, known as microstructure noise, certainly exists in high-frequency financial data which is one of the major disciplines where statistics for diffusion processes is applied. Inference for diffusions under such the noisy and discretised observation in fixed time interval [0,1] is discussed by Jacod et al. (2009), and also Favetto (2014, 2016) examine same problem as our study and shows simultaneous ML-type estimation has consistency under the situation where the variance of noise is unknown and asymptotic normality under the situation where the variance is known. As mentioned above, Nakakita and Uchida (2018b) propose adaptive ML-type estimation which has asymptotic normality even if we do not know the variance of noise, and test for noise detection which succeeds in showing the real data NWTC Information Portal (2018) which is contaminated by observational noise.

Our study aims at polynomial type large deviation inequalities for statistical random fields and construction of the estimators with not only asymptotic normality as shown in Nakakita and Uchida (2018b) but also a certain type of convergence of moments. Asymptotic normality is well-known as one of the hopeful properties that estimators are expected to have; for instance, Nakakita and Uchida (2018a) utilise this result to compose likelihood-ratio-type statistics and related ones for parametric test and proves the convergence in distribution to a χ2

We set the following notations.

Since the observation is masked by the exogenous noise, it should be transformed to obtain the undermined process {Xt}t≥0. As illustrated by Nakakita and Uchida (2018b), the sequence {¯Yj}j=0,…,kn−1 can extract the state of the latent process {Xt}t≥0 in the sense of the statement of Lemma 2.

With respect to Xt, we assume the following conditions.

With the invariant measure ν, we define

where Aτ(x,α,Λ):=A(x,α)+3Λ1{2}(τ). For these functions, let us assume the following identifiability conditions hold.

The next assumption is with respect to the moments of noise.

The assumption below determines the balance of convergence or divergence of several parameters. Note that τ is a tuning parameter and hence we can control it arbitrarily in its space (1,2].

Let us denote ϵ1=ϵ0/2 and f∈C1,1(Rd×Ξ) where f and the components of their derivatives are polynomial growth with respect to x uniformly in ϑ∈Ξ. Then the discussion in Uchida (2010) verifies under [A1] and [A6], for all M>0,

Assume that πℓ, ℓ=1,2 are continuous and 0<infθℓ∈Θℓπℓ(θℓ)<supθℓ∈Θℓπℓ(θℓ)<∞, and denote the adaptive Bayes-type estimators

Our purpose is to show the polynomial-type large deviation inequalities for the quasi-likelihood functions defined above in the framework introduced by Yoshida (2011), and the convergences of moments for these estimators as the application of them. Let us denote the following statistical random fields for u1∈Rm1 and u2∈Rm2

The evaluation of the following conditional expectations holds: