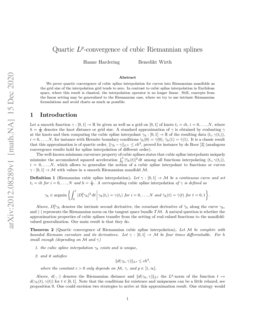 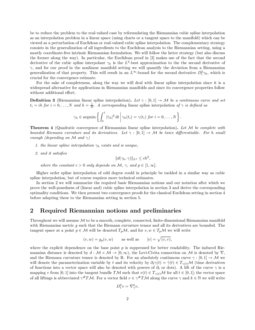 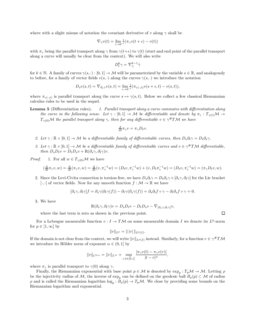 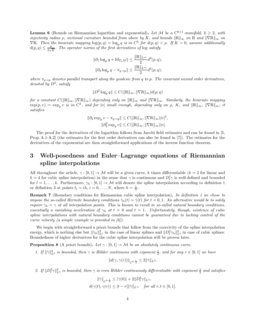 In the classical theory of cubic interpolation splines there exists an a...
Ognyan Kounchev, et al. ∙

The Numerical Recipes series of books are a useful resource, but all the...
Haysn Hornbeck, et al. ∙

Monotone cubic spline interpolation for functions with a strong gradient

Spline interpolation has been used in several applications due to its fa...
Francesc Arandiga, et al. ∙

Convergence analysis of subdivision processes on the sphere

This paper provides a strategy to analyse the convergence of nonlinear a...
Svenja Hüning, et al. ∙

Let a smooth function γ:[0,1]→R be given as well as a grid on [0,1] of knots ti=ih, i=0,…,N, where h=1N denotes the knot distance or grid size. A standard approximation of γ is obtained by evaluating γ at the knots and then computing the cubic spline interpolant γh:[0,1]→R of the resulting data (ti,γ(ti)), i=0,…,N, for instance with Hermite boundary conditions ˙γh(0)=˙γ(0), ˙γh(1)=˙γ(1). It is a classic result that this approximation is of quartic order, ∥γh−γ∥L∞≤ch4, proved for instance by de Boor [2] (analogous convergence results hold for spline interpolation of different order).

Let γ:[0,1]→M be a continuous curve and set ti=ih for i=0,…,N and h=1N. A corresponding cubic spline interpolation of γ is defined as

Above, D2tγh denotes the intrinsic second derivative, the covariant derivative of ˙γh along the curve γh, and |⋅| represents the Riemannian norm on the tangent space bundle TM. A natural question is whether the approximation properties of cubic splines transfer from the setting of real-valued functions to the manifold-valued generalization. Our main result is that they do.

Let M be complete with bounded Riemann curvature and its derivatives. Let γ:[0,1]→M be four times differentiable. For h small enough (depending on M and γ)

Above, d(⋅,⋅) denotes the Riemannian distance and ∥d(γh,γ)∥Lp the Lp-norm of the function t↦d(γh(t),γ(t)) for t∈[0,1]. Note that the conditions for existence and uniqueness can be a little relaxed, see proposition 9. One could envision two strategies to arrive at this approximation result. One strategy would be to reduce the problem to the real-valued case by reformulating the Riemannian cubic spline interpolation as an interpolation problem in a linear space (using charts or a tangent space to the manifold) which can be viewed as a perturbation of Euclidean or real-valued cubic spline interpolation. The complementary strategy consists in the generalization of all ingredients to the Euclidean analysis to the Riemannian setting, using a mostly coordinate-free intrinsic Riemannian formulation. We will follow the latter strategy (but also discuss the former along the way). In particular, the Euclidean proof in [2] makes use of the fact that the second derivative of the cubic spline interpolant γh is the L2-best approximation to the the second derivative of γ, and for our proof in the nonlinear manifold setting we will quantify the deviation from a Riemannian generalization of that property. This will result in an L∞-bound for the second derivative D2tγh

, which is crucial for the convergence estimate.

For the sake of completeness, along the way we will deal with linear spline interpolation since it is a widespread alternative for applications in Riemannian manifolds and since its convergence properties follow without additional effort.

Let γ:[0,1]→M be a continuous curve and set ti=ih for i=0,…,N and h=1N. A corresponding linear spline interpolation of γ is defined as

Let M be complete with bounded Riemann curvature and its derivatives. Let γ:[0,1]→M be twice differentiable. For h small enough (depending on M and γ)

In section 2 we will summarize the required basic Riemannian notions and our notation after which we prove the well-posedness of (linear and) cubic spline interpolation in section 3 and derive the corresponding optimality conditions. We then present two convergence proofs for the classical Euclidean setting in section 4 before adapting these to the Riemannian setting in section 5.

Throughout we will assume M to be a smooth, complete, connected, finite-dimensional Riemannian manifold with Riemannian metric g

such that the Riemann curvature tensor and all its derivatives are bounded. The tangent space at a point

p∈M will be denoted TpM, and for v,w∈TpM we will write

where the explicit dependence on the base point p is suppressed for better readability. The induced Riemannian distance is denoted by d:M×M→[0,∞), the Levi-Civita connection on M is denoted by ∇, and the Riemann curvature tensor is denoted by R. For an absolutely continuous curve γ:[0,1]→M we will denote the parameterization variable by t and its velocity by ∂tγ(t)=˙γ(t)∈Tγ(t)M

∂t or dots). A lift of the curve γ is a mapping v from [0,1] into the tangent bundle TM such that v(t)∈Tγ(t)M for all t∈[0,1]; the vector space of all liftings is abbreviated γ#TM. For a vector field v∈γ#TM along the curve γ and k∈N we will write

for k∈N. A family of curves γ(s,⋅):[0,1]→M will be parameterized by the variable s∈R, and analogously to before, for a family of vector fields v(s,⋅) along the curves γ(s,⋅) we introduce the notation

where πγ(⋅,t) is parallel transport along the curve s↦γ(s,t). Below we collect a few classical Riemannian calculus rules to be used in the sequel.

For a Lebesgue measurable function v:I→TM on some measurable domain I we denote its Lp-norm for p∈[1,∞] by

If the domain is not clear from the context, we will write ∥v∥Lp(I) instead. Similarly, for a function v∈γ#TM we introduce its Hölder norm of exponent α∈(0,1] by

where πγ is parallel transport to γ(0) along γ.

Let M be a Ck+1-manifold, k≥2, with injectivity radius ρ, sectional curvature bounded from above by K, and bounds ∥R∥∞ on R and ∥∇R∥∞ on ∇R. Then the bivariate mapping log(p,q)=logpq is in Ck for d(p,q)<ρ. If K>0, assume additionally d(p,q)≤π2√K. The operator norms of the first derivatives of log satisfy

where πq→p denotes parallel transport along the geodesic from q to p. The covariant second order derivatives, denoted by D2, satisfy

Obviously, an immediate consequence is that the linear spline interpolation γh of γ, if it exists, is Hölder continuous with

and that the cubic spline interpolation, if it exists, is Hölder continuously differentiable with

We proceed by proving the well-posedness of spline interpolation, theorem 4(1) and theorem 2(1).

Obviously, a linear spline interpolation is obtained by minimizing for each i=1,…,N the energy

among all curve segments γh:[ti−1,ti]→M that satisfy γh(ti−1)=γ(ti−1) and γh(ti)=γ(ti). Those curve segments are known to be exactly the constant speed-parameterized geodesics connecting γ(ti−1) and γ(ti), which always exist on a complete Riemannian manifold and which are unique if the end points are close enough to each other (depending on M). By uniform continuity of γ the latter condition will be fulfilled for all i=1,…,N as soon as h is small enough.

As for the well-posedness of the cubic spline interpolation, consider a minimizing sequence γnh, n=1,2,…, of curves satisfying the interpolation conditions such that the cubic spline energy E[γnh]=∥D2tγnh∥2L2 converges monotonically to the infimum, E[γnh]→inf{E[γh]|γh(ti)=γ(ti) for i=0,…,N and ˙γh(t)=˙γ(t) % for t=0,1}. Letting π~γ denote parallel transport to T~γ(0)M along a curve ~γ, we have

as the solution to the ordinary differential equation

with initial value γh(0)=γ(0), where we write π−1γhβ(t) for the parallel transport of β(t) to γh(t) along γh. The solution γh:[0,1]→M exists and is unique by the theorem of Picard and Lindelöf, and it satisfies the interpolation conditions by Gronwall’s lemma. Indeed, let us express all quantities in local coordinates Rd and indicate this by a hat. Further, let ^Π:[0,1]→Rd×d denote the matrix representation in local coordinates of π−1γh. Then ^γh solves the initial value problem

where Γ^γh:Rd×Rd→Rd is the Christoffel operator at coordinates ^γh and the second entry of F(t,^γh,^Π) refers to the matrix defined by Rd∋ξ↦Γ^γh(^Π^β(t),^Πξ)∈Rd. The function F is obviously Lipschitz so that the Picard–Lindelöf theorem can be applied (it is straightforward to show that ^γh and ^Π stay bounded for t∈[0,1]). Since ^γnh satisfies the same initial value problem, only with ^β replaced by ˆπγnh˙γnh, the curves ^γnh converge uniformly on [0,1] to ^γh by Gronwall’s lemma, as do the corresponding ^α. Consequently, ^γh satisfies the interpolation conditions. Finally note that

due to the sequential weak lower semi-continuity of the L2-norm so that γh minimizes E under the interpolation constraints.

It remains to prove uniqueness of γh. To this end we will show local convexity of the problem for h small enough. Indeed, for h small enough the interpolation problem can equivalently be formulated in terms of functions

so that for h small enough the Riemannian logarithm in the definition of vi is uniquely defined and smooth. Furthermore, again by proposition 8(2), the vi satisfy

for i=1,…,N, which by lemma 6 implies ∥˙vi∥L∞≤2C for h small enough. Now introduce

which equals E[γh]. Due to the above bounds on ∥vi∥L∞ and ∥˙vi∥L∞ we can apply lemma 6 to obtain E[γ]≥E[γh]=J[v1,…,vN]≥12∥¨vi∥2L2−1 for h small enough. Thus, the cubic spline interpolation problem in terms of the vi can thus be written as

for a constant K>0 depending only on M. Now recall that for (v1,…,vN)∈Ah we have

Furthermore, due to the homogeneous boundary conditions on each φi there exists c>0 independent of h</s