Branch-and-bound is a widely used technique for solving combinatorial optimisation problems where one has access to two procedures: a branching procedure that splits a set of potential solutions into subsets, and a cost procedure that determines a lower bound on the cost of any solution in a given subset. Here we describe a quantum algorithm that can accelerate classical branch-and-bound algorithms near-quadratically in a very general setting. We show that the quantum algorithm can find exact ground states for most instances of the Sherrington-Kirkpatrick model in time O(2^0.226n), which is substantially more efficient than Grover's algorithm. 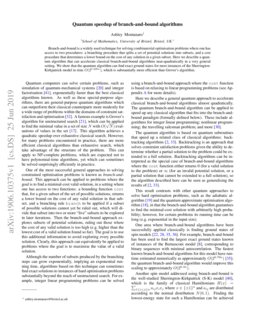 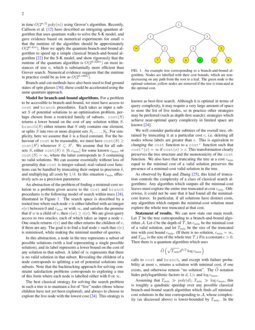 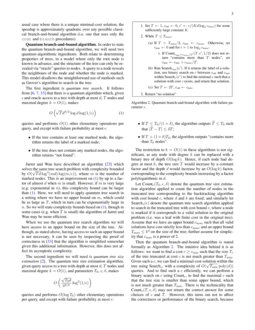 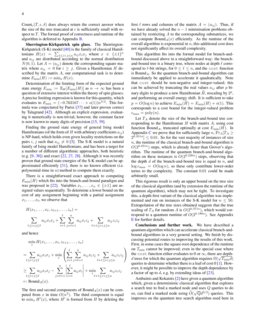 where b and c

A is a matrix, and inequalities are interpreted componentwise. Integer linear programming problems have many applications, including production planning, scheduling, capital budgeting and depot location [14].

We can solve ILPs using branch-and-bound as follows. We begin by finding a lower bound on the optimal solution to the ILP, by relaxing it to a standard linear program (LP) and solving the LP; that is, removing the constraint x∈Zn. This corresponds to the cost function. If the solution s is integer-valued, we are done, as it corresponds to a valid solution to the ILP. Otherwise, consider an index i such that the found solution value si is not an integer. To implement branching, we consider the two LPs formed by introducing the constraints xi≤⌊si⌋, xi≥⌈si⌉. At least one of these must have the same optimal solution as the original ILP. We then repeat with these new LPs. An appealing aspect of this method is that the solution to the relaxation simultaneously tells us a lower bound on the cost, and a good variable to branch on.

The sequences of additional constraints specify subsets of potential solutions to the overall ILP. The branch and cost functions take this sequence as input and solve the resulting LP, to make a decision about which variable to branch on next, and compute a lower bound on cost, respectively. The complexity of the LP-solving step is polynomial in the input size, so the primary contribution to the overall runtime will in general be the exponential scaling in terms of the number of branching steps. A standard classical method could be used (e.g. the simplex algorithm), or one of the recently developed quantum algorithms for linear programming [11, 4, 3, 26, 10].

A particularly simple and elegant special case of this approach is the knapsack problem. Here we are given a list of n items, each with weights wi and values vi, and an overall weight upper bound W. We seek to find a subset S of the items that maximises ∑i∈Svi, given that ∑i∈Swi≤W. We can write this as an integer linear program as follows:

Each variable xi corresponds to whether the i’th item is included in the knapsack. Then the LP relaxation is simply to replace the constraint xi∈{0,1} with the constraint 0≤xi≤1 for all i. This is equivalent to allowing fractional amounts of each item to be included.

The branch-and-bound approach to solving ILPs can immediately also be applied to the generalisation to Mixed Integer Linear Programming, where only certain variables are constrained. Now we only branch on those variables which are forced to be integers. One can also apply it to “branch and cut” algorithms. In this approach, when the LP relaxation returns a non-integer-valued solution, one may also add a new constraint (hyperplane) which separates that solution from all integer-valued feasible solutions.

Appendix B Analysis of Algorithm 2

In this appendix we prove the correctness and the claimed runtime bound of Algorithm 2.

oracle calls, and except with failure probability at most ϵ, returns a solution with minimal cost, if one exists, and otherwise “no solution”.

If this is the case, we first observe that the algorithm always correctly outputs a minimal-cost solution, if one exists, or otherwise “no solution”. This is because at the final iteration (when T>Tmax/2), if no solution has previously been found then Search will explore the entire tree and find a solution if one exists. To see that it outputs a minimal-cost solution, note that the binary search on c using Search is over the range [cold,cnew], and cold is no larger than the largest value of cnew previously computed, so any solution with cost smaller than cold would have been found in a previous iteration.

It remains to prove the runtime bound. Let Tc denote the size of the truncated tree with cost bound c (so Tmin=Tcmin). The first binary search (in part 2a) executes Countc O(logcmax) times, each iteration using O(√Tdlog2(1/ϵ′)) queries; and the second binary search executes Searchcnew O(logcmax) times, where each iteration uses O(√Tcnewd3/2logdlog(1/ϵ′)) queries. At each iteration of the loop, after the binary search using Countc, Tcnew≤3T/2 by correctness of the quantum tree size estimation algorithm. Further, at the first iteration when T≥3Tmin/2 (if such an iteration occurs), for all c≤cmin, Countc does not return “contains more than T nodes”. This implies that cnew≥cmin, because as the binary search terminated at cost cnew, Countcnew+1 must have returned “contains more than T nodes”. Note that this holds even though Countc can return an arbitrary outcome when Tc∈(2T/3,3T/2].

Therefore, at this iteration the tree truncated at cost cnew contains a minimal-cost solution, which will be found by the binary search on c using Searchc, and the algorithm will terminate. On the other hand, if there is no iteration such that T≥3Tmin/2, we must have Tmin>2Tmax/3. Combining these two claims, we have T≤3Tmin throughout the algorithm. The loop over exponentially increasing values of T does not affect the overall complexity bound, so the overall complexity is

We remark that it seems that, in general, Algorithm 2 could not be replaced with simply using the Search subroutine with exponentially increasing values of the cost parameter (an approach taken in [34] for the special case of accelerating backtracking algorithms for the travelling salesman problem). This is because increasing the cost at which the tree is truncated by a constant factor could increase the size of the truncated tree substantially beyond Tmin.

In this appendix, let TA denote the size of the tree corresponding to the classical branch-and-bound algorithm applied to find the ground-state energy of an Ising Hamiltonian H corresponding to an n×n matrix A, using the bounding function BoundA described in the main text, where the tree is truncated at the optimal value cmin.

We will prove the following result:

Let A be an n×n matrix corresponding to a Sherrington-Kirkpatrick model instance on n spins. For all sufficiently large n,

The dominant term in the quantum complexity is the square root of the classical complexity, which is determined by TA, so Theorem 2 implies that the quantum branch-and-bound algorithm has an O(20.226n) running time on 99% of Sherrington-Kirkpatrick model instances.

In order to prove Theorem 2, we will need two technical lemmas, proven in Appendix D.

Lemma 3 was shown in [29] but with an incorrect constant. We will also need a bound on the expectation EA[minz∈{±1}nzTAz]. A precise value for this is known as n→∞, but we will need a bound that holds for arbitrary n:

We are now able to prove Theorem 2. The basic strategy is to upper-bound the expected value of TA, using that (by linearity of expectation) this can be expressed as a sum over all bit-strings x∈{±1}ℓ, 0≤ℓ≤n, of the probability that the node corresponding to x is contained within the truncated branch-and-bound tree. These bit-strings x are precisely those such that BoundA(x)≤minz∈{±1}nzTAz, and a tail bound can be used to upper-bound the probability that this event occurs.

There are two technical difficulties which need to be handled. First, this approach does not give a good upper bound in the case where minz∈{±1}nzTAz is high, which can occur with non-negligible probability, leading to EA[TA] becoming large. We therefore handle this case separately and show that it occurs with low probability. Next, to find a tail bound on BoundA(x), we need to compute expressions of the form EA[minz∈{±1}n−ℓzTAz]; although a limiting form for this is known [37, 42, 39], we will additionally need relatively tight bounds in the case ℓ≈n. We therefore split into cases ℓ≤0.9n (where (n−ℓ)→∞ and we can use the precise limiting result) and ℓ>0.9n (where we use Lemma 4).

Write μ=EA[minz∈{±1}nzTAz], and let γ>0 be an arbitrary value to be determined. We will upper-bound the probability that TA≥B for some B as follows, where we use the notation [Y]

for the indicator random variable which evaluates to 1 if

To upper-bound the last term, we use Lemma 3. We first observe that f(A)=minzzTAz is 1-Lipschitz in each variable, as if we modify A to produce A′ by changing apq to a′pq for some pair p<q,

We next upper-bound the first term by bounding PrA[BoundA(x)≤μ+γn3/2]. We only need to consider ℓ≥0.4n in the maximisation, because when ℓ≤0.4n, trivially upper-bounding this probability by 1 already gives a sufficiently strong bound. Recall that

The function fx(A)=BoundA(x) is 1-Lipschitz in each variable by a similar argument to (2). Thus, for any η≥0,

Writing α=ℓ/n, we have that

On the other hand, for ℓ≥0.9n, we follow a similar argument but apply the nonasymptotic result of Lemma 4 to bound EA[minz∑ℓ+1≤i<j≤naijzizj], which implies that

In either case, we have

observing that γ=o(1). It remains to determine upper bounds on the functions

and to upper-bound the first term by 0.005, for sufficiently large n one can take B=20.451n. This completes the proof. ∎

In this appendix we prove Lemmas 3 and 4. We say that f(x1,…,xN) satisfies the bounded differences condition with constants di, i∈[N], if |f(x)−f(x′)|≤di whenever x and x′ differ only in the i’th coordinate.

If f(x1,…,xN) satisfies the bounded differences condition with constants di, and x1,…,xN are independent random variables, then

using a union bound over z and symmetry of the distribution of aij. By a tail bound on the normal distribution, we have

We implemented the classical branch-and-bound algorithm described in the main text, with cost function BoundA, using a simple depth-first search procedure within the branch-and-bound tree which backtracks on nodes corresponding to partial solutions with an energy bound worse than the lowest energy seen thus far. For an S-K model instance described by a matrix A, this gives an upper bound on the size TA of an optimally truncated branch-and-bound tree (equivalently, on the runtime of the best-first search algorithm applied to find the ground state energy, with cost function BoundA).

This algorithm enabled instances on more than 50 spins to be solved within minutes on a standard laptop computer. We then carried out a least-squares fit on the log of the number of nodes explored, omitting small n, to estimate the scaling of the algorithm with n. Note that, due to finite-size effects, this may not be accurate for large n; however, it gives an indication of tree size scaling. The median normalised ground state energy found for the larger values of n (e.g. ≈−0.71 for n=50) seems to approach the limiting value −0.763167… relatively slowly. These results are consistent with heuristic finite-size results reported in [9] and were validated using exhaustive search for small n.