Dempster-Shafer evidence theory is wildly applied in multi-sensor data fusion. However, lots of uncertainty and interference exist in practical situation, especially in the battle field. It is still an open issue to model the reliability of sensor reports. Many methods are proposed based on the relationship among collected data. In this letter, we proposed a quantum mechanical approach to evaluate the reliability of sensor reports, which is based on the properties of a sensor itself. The proposed method is used to modify the combining of evidences. 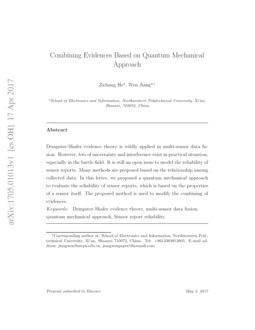 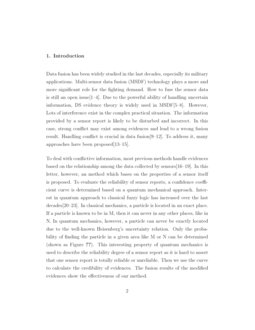 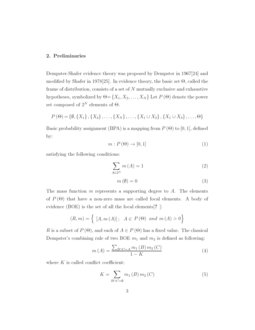 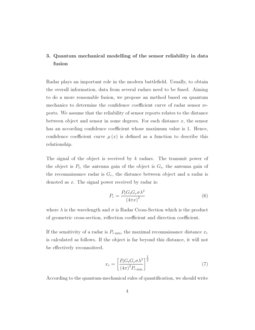 Multi-sensor data fusion based on a generalised belief divergence measure

Electronics and Sensor Subsystem Design for Daedalus 2 on REXUS 29: An Autorotation Probe for Sub-Orbital Re-Entry

The Daedalus 2 mission aboard REXUS 29 is a technology demonstrator for ...
Jan M. Wolf, et al. ∙

Fault detection in sensor nodes is a pertinent issue that has been an im...
Nimisha Ghosh, et al. ∙

How to combine uncertain information from different sources has been a h...
Yuanpeng He, et al. ∙

Metaprobability and Dempster-Shafer in Evidential Reasoning

Data fusion has been widely studied in the last decades, especially its military applications. Multi-sensor data fusion (MSDF) technology plays a more and more significant role for the fighting demand. How to fuse the sensor data is still an open issueGarcia et al. (2017); Ozanyan (2015); Jiang et al. (2016); Zebin et al. (2015). Due to the powerful ability of handling uncertain information, DS evidence theory is widely used in MSDFBasir and Yuan (2007); Dallil et al. (2013); Maherin and Liang (2015); Weeraddana et al. (2015). However, Lots of interference exist in the complex practical situation. The information provided by a sensor report is likely to be disturbed and incorrect. In this case, strong conflict may exist among evidences and lead to a wrong fusion result. Handling conflict is crucial in data fusionMoenks et al. (2016); Perez et al. (2016); Zha (2016, 2017). To address it, many approaches have been proposedWang et al. (2016); Yager et al. (2016); Jiang and Zhan (2017).

To deal with conflictive information, most previous methods handle evidences based on the relationship among the data collected by sensorsDeng et al. (2015); Liu (2006); Murphy (2000); Guo et al. (2006). In this letter, however, an method which bases on the properties of a sensor itself is proposed. To evaluate the reliability of sensor reports, a confidence coefficient curve is determined based on a quantum mechanical approach. Interest in quantum approach to classical fuzzy logic has increased over the last decadesAbd Ali et al. (2015); Bolotin (2001); Dubois and Toffano (2016); Pykacz (2015)

. In classical mechanics, a particle is located in an exact place. If a particle is known to be in M, then it can never in any other places, like in N. In quantum mechanics, however, a particle can never be exactly located due to the well-known Heisenberg’s uncertainty relation. Only the probability of finding the particle in a given area like M or N can be determined (shown as Figure

LABEL:particle). This interesting property of quantum mechanics is used to describe the reliability degree of a sensor report as it is hard to assert that one sensor report is totally reliable or unreliable. Then we use the curve to calculate the credibility of evidences. The fusion results of the modified evidences show the effectiveness of our method.

Dempster-Shafer evidence theory was proposed by Dempster in 1967Dempster (1967) and modified by Shafer in 1978Shafer (1978). In evidence theory, the basic set Θ, called the frame of distribution, consists of a set of N mutually exclusive and exhaustive hypotheses, symbolized by Θ={X1,X2,…,XN} Let P(Θ) denote the power set composed of 2N elements of Θ.

Basic probability assignment (BPA) is a mapping from P(Θ) to [0,1], defined by:

The mass function m represents a supporting degree to A. The elements of P(Θ) that have a non-zero mass are called focal elements. A body of evidence (BOE) is the set of all the focal elementsJousselme2001A:

R is a subset of P(Θ), and each of A∈P(Θ) has a fixed value. The classical Dempster’s combining rule of two BOE m1 and m2 is defined as following:

where K is called conflict coefficient:

3 Quantum mechanical modelling of the sensor reliability in data fusion

If the sensitivity of a radar is Prmin, the maximal reconnaissance distance xr is calculated as follows. If the object is far beyond this distance, it will not be effectively reconnoitred.

According to the quantum-mechanical rules of quantification, we should write an operator which corresponds to the received signal power:

where c is a scale factor. V(x) is a quasi-potential function to model the received power.

where γ∝PtGtGrσλ2(4π)2 corresponds to the parameters in Eq. (6). The quasi-potential function V(x) is roughly illustrated as Figure 1.

Based on quantum-mechanical rules, a quasi time-independent Schr¨odinger equation can be obtained.

where L relates to the level of the radar sensitivity Prmin.

The solution of Eq. (10) is a quasi-amplitude distribution ψ(x). When the object is within the maximal reconnaissance distance xr, we can obtain:

where Jα and Yα are the Bessel function of the first kind and the second kind respectively. α is their order:

Then let us consider the other situation, when the object is beyond xr, the value of V(x) is infinite. According to quantum mechanics, it is impossible for a particle to penetrate the well wall if it is within a infinite well potential. Hence, we can conclude that ψ(x)=0 in this case.

Then we can obtain the probability distribution

P(x), which is illustrated graphically in Figure 2.

By amplifying Eq. (13), we can obtain the confidence coefficient curve μ(x).

Seen from Figure 3, the curve rises rapidly when x is smaller than x0 and comes to its maximum when x equals to x0. Then it declines slowly until x comes to xr, which is reasonable. In practical situation, due to precision and some other intricate issues, a radar do not work well when it is too close to the object. There exists an optimal distance x0 for a radar to work. Then the performance of a radar becomes poorer as it is located further. When the distance is further than the maximal reconnaissance distance, the radar can not reconnoitre the object effectively. With the basis of this curve, we can evaluate the reliability of radar reports effectively. For different types of radars, we can obtain their according confidence coefficient curves as Figure 4. The parameters of these curves are in Table 1.

In the following, the curves are used in combining evidences. Assume we have k pieces of BOEs: m1,m2,…,mk, collected from k radar sensors. By using confidence coefficient curves, each BOE corresponds to one confidence coefficient: μ1,μ2,…,μk. The credibility degree Crdi of BOE mi is defined as:

It is easy to find that ∑ki=iCrdi. Hence, the credibility degree reveals the relatively importance of the collected evidence. After determining the credibility of each BOE, we do a modified average for all k pieces of BOEs to obtain a new evidence m′.

In this section, a numerical example is illustrated to show the effectiveness of our method. In a target recognition system, five radar sensors have collected five pieces of BOEs shown as follows:

The reliability of these sensor reports is 0.55, 0.6, 0.25, 0.45 and 0.5 respectively, which is obtained based on their confidence coefficient curves. Then fusion results and comparison are shown in Table 2.

Four evidences prefer to recognizing the target as A. Hence, data from the third sensor is probable to be interfered and incorrect. As can be seen from Table 2, in this situation, our method works better than Murphy’s while the classical combining rule does not work. The target can be effectively recognized with our method.

In summary, we propose a new method to model the reliability of sensor reports. Unlike previous methods, we focus on the properties of a sensor itself. The confidence coefficient curve of a radar sensor is obtained by solving a a quasi time-independent Schr¨odinger equation. The method is used in combining of evidences. The result shows the efficiency of our method.