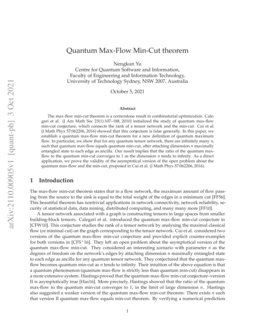 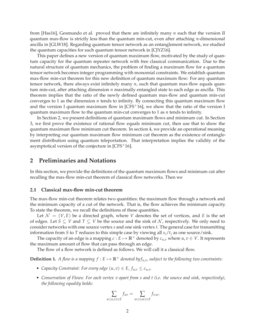 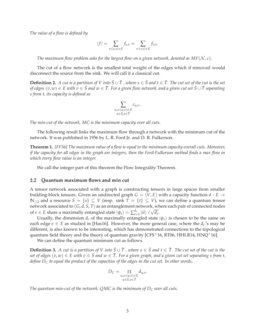 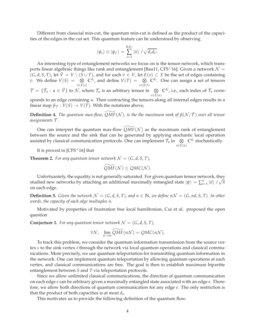 In a second seminal paper on the application of semidefinite programming...
Alantha Newman, et al. ∙

Numerical approaches for investigating quasiconvexity in the context of Morrey's conjecture

Deciding whether a given function is quasiconvex is generally a difficul...
Jendrik Voss, et al. ∙

There are many applications of max flow with capacities that depend on o...
Maxwell Allman, et al. ∙

We tackle the problem of establishing the soundness of approximate bisim...
Massimo Bartoletti, et al. ∙

The max-flow min-cut theorem states that in a flow network, the maximum amount of flow passing from the source to the sink is equal to the total weight of the edges in a minimum cut [FF56]. This beautiful theorem has nontrivial applications in network connectivity, network reliability, security of statistical data, data mining, distributed computing, and many many more [FF10].

In this section, we provide the definitions of the quantum maximum flows and minimum cut after recalling the max-flow min-cut theorem of classical flow networks. Then we

Let N=(V,E) be a directed graph, where V denotes the set of vertices, and E is the set of edges. Let S⊆V and T⊆V be the source and the sink of N, respectively. We only need to consider networks with one source vertex s and one sink vertex t. The general case for transmitting information from S to T reduces to this simple case by viewing all si/tj as one source/sink.

The capacity of an edge is a mapping c:E↦R+ denoted by cu,v where u,v∈V. It represents the maximum amount of flow that can pass through an edge.

The flow of a flow network is defined as follows. We will call it a classical flow.

A flow is a mapping f:E↦R+ denoted byfu,v, subject to the following two constraints:

The value of a flow is defined by

The maximum flow problem asks for the largest flow on a given network, denoted as MF(N,c).

The cut of a flow network is the smallest total weight of the edges which if removed would disconnect the source from the sink. We will call it a classical cut.

The min-cut of the network, MC is the minimum capacity over all cuts.

The following result links the maximum flow through a network with the minimum cut of the network. It was published in 1956 by L. R. Ford Jr. and D. R. Fulkerson.

[FF56] The maximum value of a flow is equal to the minimum capacity overall cuts. Moreover, if the capacity for all edges in the graph are integers, then the Ford-Fulkerson method finds a max flow in which every flow value is an integer.

We call the integer part of this theorem the Flow Integrality Theorem.

A tensor network associated with a graph is constructing tensors in large spaces from smaller building-block tensors. Given an undirected graph G=(V,E) with a capacity function d:E→N≥2 and a resource S={s}⊆V (resp. sink T={t}⊆V), we can define a quantum tensor network associated to (G,d,S,T) as an entanglement network, where each pair of connected nodes of e∈E share a maximally entangled state |ψe⟩=∑dei=1|ii⟩/√de.

Usually, the dimension de of the maximally entangled state |ψe⟩ is chosen to be the same on each edge e∈E as studied in [Has16]. However, the more general case, where the de′s may be different, is also known to be interesting, which has demonstrated connections to the topological quantum field theory and the theory of quantum gravity [CFS+16, RT06, HHLR14, HNQ+16].

We can define the quantum minimum cut as follows.

A cut is a partition of V into ¯S∪¯T , where s∈¯S and t∈¯T. The cut set of the cut is the set of edges (v,w)∈E with v∈¯S and w∈¯T. For a given graph, and a given cut set separating s from t, define DC to equal the product of the capacities of the edges in the cut set. In other words,

The quantum min-cut of the network, QMC is the minimum of DC over all cuts.

Different from classcial min-cut, the quantum min-cut is defined as the product of the capacities of the edges in the cut set. This quantum feature can be understood by observing

An interesting type of entanglement networks we focus on is the tensor network, which transports linear algebraic things like rank and entanglement [Bau11, CFS+16]. Given a network N=(G,d,S,T), let ~V=V∖(S∪T), and for each v∈V, let E(v)⊂E be the set of edges containing v. We define V(S)=⨂e∈E(s)Cde, and define V(T)=⨂e∈E(t)Cde. One can assign a set of tensors T={Tu:u∈~V} to N, where Tu is an arbitrary tensor in ⨂e∈E(u)Cde, i.e., each index of Tu corresponds to an edge containing u. Then contracting the tensors along all internal edges results in a linear map βT:V(S)→V(T). With the notations above,

The quantum max-flow, ˜QMF(N), is the the maximum rank of β(N;T) over all tensor assignments T.

One can interpret the quantum max-flow ˜QMF(N) as the maximum rank of entanglement between the source and the sink that can be generated by applying stochastic local operation assisted by classical communication protocols. One can implement Tu in ⨂e∈E(u)Cde stochastically.

Unfortuantely, the equality is not generally saturated. For given quantum tensor network, they studied new networks by attaching an additional maximally entangled state |ψ⟩=∑ni=1|ii⟩/√n on each edge.

To track this problem, we consider the quantum information transmission from the source vertex s to the sink vertex t through the network via local quantum operations and classical communications. More precisely, we use quantum teleportation for transmitting quantum information in the network. One can implement quantum teleportation by allowing quantum operations at each vertex, and classical communications are free. The goal is then to establish maximum bipartite entanglement between S and T via teleportation protocols.

This motivates us to provide the following definition of the quantum flow.

A flow is a map f:E↦N that satisfies the following:

The value of a flow f is defined as follows.

The value of a flow is the amount of flow passing from the source to the sink. Formally for a flow f:E↦N it is given by

The maximum flow problem is to route as much flow as possible from the source to the sink. In other words, the maximum flow of the network, QMF, is the flow fmax with maximum value.

A flow f:E↦N is a strict flow if fv,s=ft,u=1 for all (s,v),(u,t)∈E. The maximum strict flow of the network, QMFs, is the flow fmax with maximum value.

To prove our main results, we need the following definitions of R flow and Q flow. For F=R or Q, we define the quantum flow over F.

For quantum tensor network N=(G,d,S,T), a flow over F is a map f:E↦F that satisfies the following:

The value of a flow f:E↦F it is given by

For F=R, the constraints are all closed, so the maximum is achievable. For F=Q, the definition uses supremum.

Before presenting the main result of this paper, we first observe the following lemma.

In the second line, we use the conservation of flows. In the third line, we use the following fact: The flow of each edge except those between ¯S and ¯T appears twice: One in the numerator and the other in the denominator. ∎

Using this lemma, we can show

To bound QMFR(N), we choose a minimum cut ¯S∪¯T with C=(¯S×¯T)⊆E. Using Lemma 1, we know that any flow f over R satsifies

This proof of the above lemma shows the following property of flows which saturates the minimum cut.

Interestingly, there is always a rational flow to achieve the quantum minimum cut.

Moreover, there is a rational flow which achieves the maximum flow.

We first prove that

To show this, we only need to provide a flow f over R satisfies |f|=QMC(N). We consider a classical flow network M=(G′,c,S,T) from quantum tensor network N=(G,d,S,T) with undirected graph G=(V,T): G′=(V,E′) is a directed graph where

In other words, the source s has only outgoing edges, the sink has only incoming edges, and other edges in N are duplicated in both directions.

It is clear to observe that the following relation between the min-cut of M and N.

We consider classical flow over M as Definition 1. Theorem 1, the max-flow min-cut theorem, implies that there exists a flow h:E′↦R+ such that

In other words, f is a flow over R in quantum tensor network N and satisfies

If f is also a rational flow, then the statement of this lemma is already true.

Case 1: u∉{s,t}: Since fu,v is a flow, according to the conservation condition on u

there exists wv/ such that fs,w∉Q.

Thus, there exists wv/ such that fw,t∉Q.

By repreating this procedure, we can obtain a circle u0,⋯,um since the graph G is finite. More precisely, we have

and leaving the rest of f unchanged. By using this method to modify fui,ui+1 and fui+1,ui for each i, we can obtain a flow f′:E′′↦ satisfies

and leave the rest of f′ unchange. One can verify that f′′ is still a flow over R with |f′′|=QMC(N) according to Lemma 1.

Moreover, each run of this procedure decreases the number of non-rational edge asignement by at least 1.

Using Lemma 4, we are able to prove the following lemma.

For any N=(G,d,S,T), there are infinitely many n∈N such that

For any cut ¯S∪¯T, the value of the cut in nN is

In the following, we will prove that for any sufficient large k∈N, there exists a flow f:E↦N of kn0m0N such that

The integrality theorem of Theorem 1 states that if all arc capacities are integer, the maximum flow problem has an integer maximum flow.

Applying the integrality theorem on M, we know that there is a flow h:E↦{0,1,−1} with value |C|. We can first simplify that into an equivalent flow h′:E↦{0,1}. In other words, we can choose |C| disjoint paths, consisting of undirected edges, from s to t where we call two paths are disjoint if they do not share edges. We can assign directions for these paths, from s to t. Now we have |C| disjoint paths from s to t. We use P to denoted the set of directed edges in these paths,

We use the information of P to update the flow g:E↦Q.

One can cerify that f is a flow by observing

can be obtained from

by multiplying (km0)r from each handsides for approperate integer r due to the face that P is consisting of directed paths.

One can verify that

This complete the proof. ∎

Given quantum tensor network N=(G,d,S,T), if there exist a flow f:E↦N such that

then there exists a strict flow g:E↦N such that