Support vector machine (SVM) is a particularly powerful and flexible supervised learning model that analyze data for both classification and regression, whose usual complexity scales polynomially with the dimension and number of data points. Inspired by the quantum SVM, we present a quantum-inspired classical algorithm for SVM using fast sampling techniques. In our approach, we develop a general method to approximately calculate the kernel function and make classification via carefully sampling the data matrix, thus our approach can be applied to various types of SVM, such as linear SVM, poly-kernel SVM and soft SVM. Theoretical analysis shows one can find the supported hyperplanes on a data set which we have sampling access, and thus make classification with arbitrary success probability in logarithmic runtime, matching the runtime of the quantum SVM. 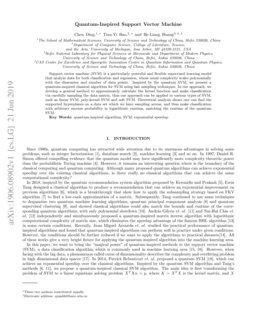 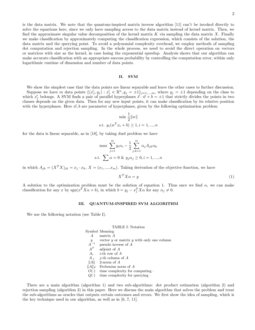 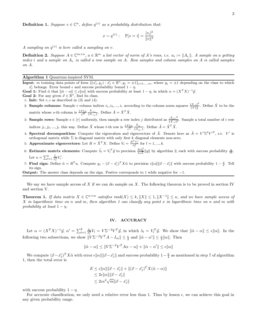 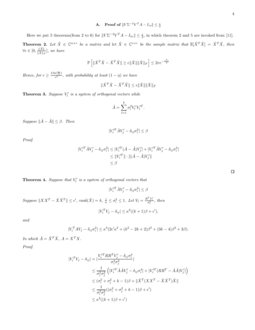 Since the 1980s, quantum computing has attracted wide attention due to its enormous advantages in solving hard computational problems, such as integer factorization [1], database searching [2], machine learning [3]

and so on. In 1997, Daniel R. Simon offered compelling evidence that the quantum model may have significantly more complexity theoretic power than the probabilistic Turing machine

In 2018, inspired by the quantum recommendation system algorithm proposed by Iordanis Kerenidis and Anupam Prakash [5], Ewin Tang designed a classical algorithm to produce a recommendation algorithm that can achieve an exponential improvement on previous algorithms [6], which is a breakthrough that shows how to apply the subsampling strategy based on Alan Frieze, Ravi Kannan, and Santosh Vempala’s 2004 algorithm [7]

[8] and quantum supervised clustering [9], and shows classical algorithms could also match the bounds and runtime of the corresponding quantum algorithms, with only polynomial slowdown [10].

In this paper, we want to bring the “magical power” of quantum-inspired methods to the support vector machine (SVM), a data classification algorithm which is commonly used in machine learning area [15, 16]

. However, SVM is still not powerful enough when dealing with large data sets and spaces, for a phenomenon called the curse of dimensionality which describes the complexity and overfitting problem is usually observed

The main idea is first to transform the problem of making classification to the problem of solving equation XTXα=y, where K=XTX is the kernel matrix, and X is the data matrix. We note that the quantum-inspired matrix inverse algorithm [11] can not be invoked directly to solve the equations here, since we only have sampling access to the data matrix X instead of kernel matrix K

. Thus, we find the approximate singular value decomposition of the kernel matrix

K by developing an indirect sampling technique that will sample the data matrix X instead of K. Finally we make classification by approximately computing the classification expression, which consists of the solution α of the former equation, the data matrix X and the querying point →x. To avoid a polynomial complexity overhead, we employ methods of sampling dot computation and rejection sampling. In the whole process, we need to avoid the direct operation on the vectors or matrices with the same size as the kernel, in case losing the exponential speedup. Analysis shows that our algorithm can make accurate classification with an appropriate success probability by controlling the computation error, within only logarithmic runtime of the dimension of data space and the number of data points.

We show the simplest case that the data points are linearly separable and leave the other cases to further discussion(see Section VI).

Suppose we have m data points {(→xj,yj):→xj∈Rn,yj=±1}j=1,…,m, where yj=±1 depending on the class to which →xj belongs. A SVM finds a pair of parallel hyperplanes →x⋅→w+b=±1 that strictly divides the points into two classes depends on the given data. Then for any new input points, it can make classification by its relative position with the hyperplanes. Here →w,b are parameter of hyperplanes, given by the following optimization problem

for the data is linear separable, as in [18], by taking duel problem we have

A solution to the optimization problem must be the solution of equation 1. Thus once we find α, we can make classification for any given point x by sgn(xTXα+b), in which b=yj−xTjXα for any αj≠0.

We show the idea of sampling to get indices, which is the key technique used in our algorithm, as well as in [7, 6, 11].

as a probability distribution that:

We introduce two algorithms employing sampling techniques for saving complexity. They are treated as oracles that outputs certain outcomes with controlled errors in the main algorithm.

Here we invoke Alg. 1 from [11]. This algorithm achieves computation of inner products within certain success probability and error.

Alg. 2 achieves sampling of a vector that we do not have full query access in time logarithmic of its length.

We show the main algorithm (Alg. 4) that make classification as the classical SVMs. Notice that actual computation only happens when we use the expression "compute" in this algorithm. Otherwise it will lose the exponential-speedup advantage for operations on large vectors or matrices. Fig. 1 shows the algorithm process.

The following theorem is to be proved in section IV and section V.

If data matrix X∈Cn×m satisfies rank(X)≤k,∥X∥≤1,∥X−1∥≤κ, and we have sample access of X in logarithmic time on n and m, then algorithm 4

can classify any point

x in logarithmic time on n and m with probability at least 1−η.

Here E1≤ϵ∥α∥∥→x−→xj∥ with probability no less than 1−η4 is guaranteed by step 10 of algorithm 4.

E2≤ϵ2∥α∥∥→x−→xj∥ with probability no less than 1−η2 is shown in subsection IV-A.

E3≤ϵ2∥α∥∥→x−→xj∥ with probability no less than 1−η4 is shown in subsection IV-B.

with success probability no less than 1−η.

For achieving accurate classification, we only need a relative error E(→x−→xj)TXα less than 1. Thus by lessen ϵ, we can achieve this goal in any given probability range.

Here we put 5 theorems(from 2 to 6) for ∥VΣ−2VTA−Im∥≤ϵ2, in which theorem 2 and 5 are invoked from [11]. We offer proofs for the other theorems in appendix B. Theorem 6 proves ∥VΣ−2VTA−Im∥≤ϵ2 based on the conditions and the former theorems.

Suppose V′l is a system of orthogonal vectors while

Suppose that V′l is a system of orthogonal vectors that

If rank(B)≤k, V has k columns that spans the row and column space of B, then

Suppose that Vl is a system of approximated orthogonal vectors that

and decide the sampling parameter as

In which ∥VTV∥≤43 as shown in proof of theorem 6.

We analyzed the steps of main algorithm and show each step’s complexity is within the logarithmic time.

Inspecting algorithm 1, we can easily find its complexity is

For computation of ~λl by algorithm 1, we have

Observe that ∥→yV′Tl^XT∥F=∥→y∥∥V′Tl^XT∥≤∥→y∥, and we can query the (i,j) matrix element of →yV′Tl^XT in cost O(r). Thus the complexity in step 9 is

for any i=1,...,m, we have ~αi=∑rs=1Rsjus. To estimate Rsj. We take Rsj=eTs^XTXej=Tr[XejeTs^XT] and using algorithm 1 computing it to ϵ1 with success probability η1 that

ϵ′ and β are given in subsection IV-A.

and the success probability is 1−η2=1−rη1. The complexity is

We compute j by a sample of ~α by the following algorithm 2. We do not care about error of j or success probability here because if |~αj|>ϵκ2√m>ϵ∥α∥, it suffice to sample another index of ~α. For the sampling depends on the elements in ~α, the probability that we obtain small |~αj| is low.

Here we can take D as

and control it within logarithmic range of m by reducing ϵ. Or we can simply compute ∥^Xu∥ using algorithm 1 and take it as D.

For ~α=RTu=XT^Xu we need to query ~αi=XTi.^Xu for ∥X∥F∥^Xu∥∥XT^Xu∥ times on average. If we get D in the first way, the total sampling complexity is

Once we have index j and query access to ~α, by algorithm 1, we can compute yj−(→x−→xj)TX~α to the assumption in step 10 of algorithm 4

which is within the logarithmic range of m and n. Considering the error and success probability in query process, the total error is

while the success probability is greater than

Other ways of solving this question are like solving Xα from XTXα=y simply employing algorithm in [11] and use it in estimation of yj−(→x−→xj)TX~α. Or solve α twice by employing algorithm in [11] twice. Though it works for the simplest case, it can not deal with further problem like soft SVM because it simply depends on the ability to solve linear equations with sample access on coefficient matrix.

We here give some discussion about the improvements to be made in our algorithm in the future:

Remember in algorithm 1 we can estimate dot products for two vectors. However, it does not work well for all the conditions, like when ∥→x∥ and ∥→y∥ are donminated by a coordinate. For randomness, [19] implies that we can apply a spherically random rotation R to all →x, which does not change the kernel matrix K

, but will make all the coordinates random variables distributed evenly.

When the training data is not linearly separable, there is not a pair of parallel hyperplanes that strictly divides the points into two classes depends on the given data. Hence the solution to the original optimization problem does not exist. There are two kinds of improving methods here.

A non-linear SVM improves the fitting ability by changing the kernel function, thus making it possible to classify strictly.

Take polynomial kernel for example, we have

Thus we can sample on X, and for K=XTX, algorithm 4 is still suitable here.

While a non-linear SVM may bring overfitting problem while achieving strict classification, another improving methods is soft SVM, which allows for wrong classification on training data and minimize the offsets.

We only consider its sub-equation

Thus to find solution of (5), we only need to add 1γ to all the eigenvalues of ~A in step 7 of algorithm 4 and continue.

Some improvements on our work would be made in the future, such as reducing the conditions on the data matrix and further reducing the complexity, which can be achieved through a deeper investigation on the algorithm and the error propagation process.

We note that our work, as well as the previous quantum-inspired algorithms, are not intended to demonstrate that quantum computing is uncompetitive. We want to find out where the boundaries of classical and quantum computing are, and we expect new quantum algorithms are developed to beat our algorithm.

Appendix B Proof of Theorems in Iv