Quantum Algorithms for the Most Frequently String Search, Intersection of Two String Sequences and Sorting of Strings Problems 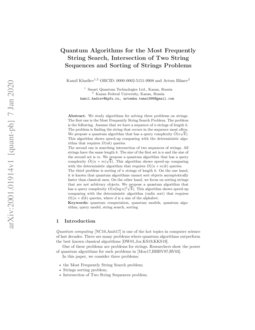 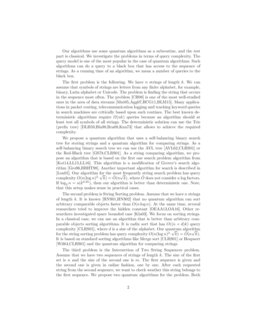 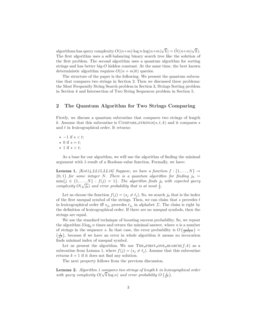 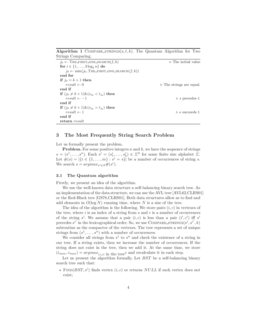 Quantum computing [NC10, AMB17] is one of the hot topics in computer science of last decades. There are many problems where quantum algorithms outperform the best known classical algorithms [DE 01, 21, KS19, KKS19].

One of these problems are problems for strings. Researchers show the power of quantum algorithms for such problems in [MON17, BBB+97, RV03].

In this paper, we consider three problems:

Our algorithms use some quantum algorithms as a subroutine, and the rest part is classical. We investigate the problems in terms of query complexity. The query model is one of the most popular in the case of quantum algorithms. Such algorithms can do a query to a black box that has access to the sequence of strings. As a running time of an algorithm, we mean a number of queries to the black box.

The first problem is the following. We have n strings of length k. We can assume that symbols of strings are letters from any finite alphabet, for example, binary, Latin alphabet or Unicode. The problem is finding the string that occurs in the sequence most often. The problem [CH08] is one of the most well-studied ones in the area of data streams [MUT05, AGG07, BCG11, BLM15]. Many applications in packet routing, telecommunication logging and tracking keyword queries in search machines are critically based upon such routines. The best known deterministic algorithms require Ω(nk) queries because an algorithm should at least test all symbols of all strings. The deterministic solution can use the Trie (prefix tree) [DE 59, BLA98, BRA08, KNU73] that allows to achieve the required complexity.

We propose a quantum algorithm that uses a self-balancing binary search tree for storing strings and a quantum algorithm for comparing strings. As a self-balancing binary search tree we can use the AVL tree [AL62, CLR+01] or the Red-Black tree [GS78, CLR+01]. As a string comparing algorithm, we propose an algorithm that is based on the first one search problem algorithm from [KOT14, LL15, LL16]. This algorithm is a modification of Grover’s search algorithm [GRO96, BBH+98]. Another important algorithm for search is described in [LON01]. Our algorithm for the most frequently string search problem has query complexity O(n(logn)2⋅√k)=~O(n√k), where ~O does not consider a log factors. If log2n=o(k0.25), then our algorithm is better than deterministic one. Note, that this setup makes sense in practical cases.

The second problem is String Sorting problem. Assume that we have n strings of length k. It is known [HNS01, HNS02] that no quantum algorithm can sort arbitrary comparable objects faster than O(nlogn). At the same time, several researchers tried to improve the hidden constant [OEA+13, OA16]. Other researchers investigated space bounded case [KLA03]. We focus on sorting strings. In a classical case, we can use an algorithm that is better than arbitrary comparable objects sorting algorithms. It is radix sort that has O((n+d)k) query complexity [CLR+01], where d is a size of the alphabet. Our quantum algorithm for the string sorting problem has query complexity O(n(logn)2⋅√k)=~O(n√k). It is based on standard sorting algorithms like Merge sort [CLR+01] or Heapsort [WIL64, CLR+01] and the quantum algorithm for comparing strings.

The third problem is the Intersection of Two String Sequences problem. Assume that we have two sequences of strings of length k. The size of the first set is n and the size of the second one is m. The first sequence is given and the second one is given in online fashion, one by one. After each requested string from the second sequence, we want to check weather this string belongs to the first sequence. We propose two quantum algorithms for the problem. Both algorithms has query complexity O((n+m)⋅logn⋅log(n+m)√k)=~O((n+m)√k). The first algorithm uses a self-balancing binary search tree like the solution of the first problem. The second algorithm uses a quantum algorithm for sorting strings and has better big-O hidden constant. At the same time, the best known deterministic algorithm requires O((n+m)k) queries.

Firstly, we discuss a quantum subroutine that compares two strings of length k. Assume that this subroutine is \textscCompare_strings(s,t,k) and it compares s and t in lexicographical order. It returns:

As a base for our algorithm, we will use the algorithm of finding the minimal argument with 1-result of a Boolean-value function. Formally, we have:

and error probability that is at most

We use the standard technique of boosting success probability. So, we repeat the algorithm 3log2n times and return the minimal answer, where n is a number of strings in the sequence s. In that case, the error probability is O(123logn)=(1n3), because if we have an error in whole algorithm it means no invocation finds minimal index of unequal symbol.

Let us present the algorithm. We use \textscThe_first_one_search(f,k) as a subroutine from Lemma 1, where f(j)=(sj≠tj). Assume that this subroutine returns k+1 if it does not find any solution.

The next property follows from the previous discussion.

3 The Most Frequently String Search Problem

Let us formally present the problem.

Firstly, we present an idea of the algorithm.

We use the well-known data structure a self-balancing binary search tree. As an implementation of the data structure, we can use the AVL tree [AL62, CLR+01] or the Red-Black tree [GS78, CLR+01]. Both data structures allow as to find and add elements in O(logN) running time, where N is a size of the tree.

The idea of the algorithm is the following. We store pairs (i,c) in vertexes of the tree, where i is an index of a string from s and c is a number of occurrences of the string si. We assume that a pair (i,c) is less than a pair (i′,c′) iff si precedes si′ in the lexicographical order. So, we use \textscCompare_strings(si,si′,k) subroutine as the compactor of the vertexes. The tree represents a set of unique strings from (s1,…,sn) with a number of occurrences.

We consider all strings from s1 to sn and check the existence of a string in our tree. If a string exists, then we increase the number of occurrences. If the string does not exist in the tree, then we add it. At the same time, we store (imax,cmax)=argmax(i,c) in the treec and recalculate it in each step.

Let us present the algorithm formally. Let BST be a self-balancing binary search tree such that:

Let us discuss the property of the algorithm.

Algorithm 2 finds the most frequently string from s=(s1,…,sn) with query complexity O(n(logn)2⋅√k) and error probability O(1n).

Hence, the total error probability is at most O(1n).

All of these data structures has O((logn)2√k) complexity of basic operations (Find, Add, Delete).

3.2 On the Classical Complexity of the Problem

The best known classical algorithm stores string to Trie (prefix tree) [DE 59, BLA98], [BRA08, KNU73] and do the similar operations. The running time of such algorithm is O(nk). At the same time, we can show that if an algorithm testso(nk) variables, then it can return a wrong answer.

Any deterministic algorithm for the Most Frequently String Search problem has Ω(nk) query complexity.

Suppose, we have a deterministic algorithm A for the Most Frequently String Search problem that uses o(nk) queries.

Let us consider an adversary that suggest an input. The adversary wants to construct an input such that the algorithm A obtains a wrong answer.

Assume that A returns a string s≠s′. Then, the adversary assigns sz′′j′′=a and assigns sij=a for each i≤n/2,j∈{1,…,k}. Therefore, the right answer should be s′.

So, the adversary can construct the input such that A obtains a wrong answer. □

Let us consider the following problem.

We use Heap sort algorithm [WIL64, CLR+01] as a base and Quantum algorithm for comparing string from Section 2. We can replace Heap sort algorithm by any other sorting algorithm, for example, Merge sort [CLR+01]. In a case of Merge sort, the big-O hidden constant in query complexity will be smaller. At the same time, we need more additional memory.

Let us present Heap sort for completeness of the explanation. We can use Binary Heap [WIL64]. We store indexes of strings in vertexes. As in the previous section, if we compare vertexes v and v′ with corresponding indexes i and i′, then v>v′ iff si>si′ in lexicographical order. We use \textscCompare_strings(si,si′,k) for comparing strings. Binary Heap BH has three operations:

The operations Get_min_and_delete and Add invoke Compare_strings subroutine log2t times, where t is the size of the heap.

The algorithm is the following.

If we implement the sequence s as an array, then we can store the heap in the same array. In this case, we do not need additional memory.

We have the following property of the algorithm that can be proven by the same way as Theorem 3.1.

The lower bound for deterministic complexity can be proven by the same way as in Theorem 3.2.

Any deterministic algorithm for Sorting problem has Ω(nk) query complexity.

The Radix sort [CLR+01] algorithm almost reaches this bound and has O((n+|Σ|)k) complexity.

Let us consider the following problem.

We have two algorithms. The first one is based on “Set of strings with quantum comparator” data structure from Section 3. We store all strings from s to a self-balancing binary search tree BST. Then, we answer each request using \textscFind(BST,si) operation. Let us present the Algorithm 4.

The second algorithm is based on Sorting algorithm from Section 4. We sort strings from s. Then, we answer to each request using binary search in the sorted sequence of strings [CLR+01] and Compare_strings subroutine for comparing strings during the binary search. Let us present the Algorithm 5. Assume that the sorting Algorithm 3 is the subroutine \textscSort_strings(s) and it returns the order ORDER=(i1,…,in). The binary search algorithm with Compare_strings subroutine as comparator is \textscBinary_search_for_strings(t,s,OREDER) subroutine and it searches t in the ordered sequence (si1,…,sin). Suppose that the subroutine Binary_search_for_strings returns 1 if it finds t and 0 otherwise.

The algorithms have the following query complexity.

Hence, the total error probability is at most O(1n+m).

The lower bound for deterministic complexity can be proven by the same way as in Theorem 3.2.

Any deterministic algorithm for Intersection of Two Sequences of Strings Problem has Ω((n+m)k) query complexity.

Note, that we can use the quantum algorithm for element distinctness [AMB07], [AMB04] for this problem. The algorithm solves a problem of finding two identical elements in the sequence. The query complexity of the algorithm is O(D2/3), where D is a number of elements in the sequence. The complexity is tight because of [AS04]. The algorithm can be the following. On j-th request, we can add the string tj to the sequence s1,…,sn and invoke the element distinctness algorithm that finds a collision of tj with other strings. Such approach requires Ω(n2/3) query for each request and Ω(mn2/3) for processing all requests. Note, that the streaming nature of requests does not allow us to access to all t1,…,tm by Oracle. So, each request should be processed separately.