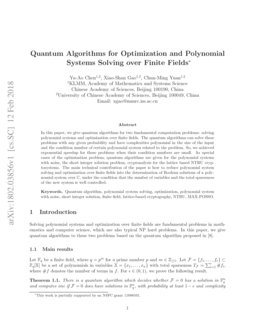 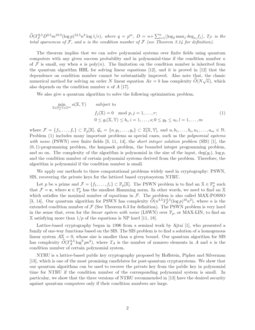 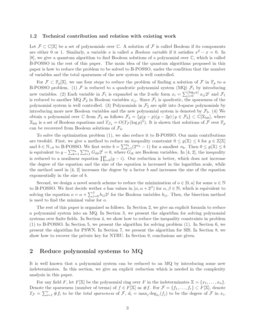 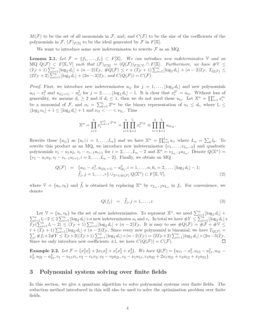 In this paper, we give quantum algorithms for two fundamental computatio...
Yu-Ao Chen, et al. ∙

Decision of whether a Boolean equation system has a solution is an NPC p...
Yu-Ao Chen, et al. ∙

The solutions of a system of polynomials in several variables are often ...
Jasmine Otto, et al. ∙

The Polynomial Learning With Errors Problem and the Smearing Condition

Solving polynomial systems and optimization over finite fields are fundamental computation problems in mathematics and computer science, which are also typical NP hard problems. In this paper, we give quantum algorithms to these problems, which could be exponential faster than the traditional methods under certain conditions.

There is a quantum algorithm which decides whether F=0 has a solution in Fnq and computes one if F=0 does have solutions in Fnq, with success probability at least 1−ϵ and complexity ˜O(T3.5FD3.5m5.5log4.5pκ2log1/ϵ), where D=n+∑ni=1⌊log2maxj\rm{deg}xifj⌋, TF is the total sparseness of F, and κ is the condition number of F (see Theorem 3.13 for definition).

The complexity of a quantum algorithm is the number of quantum gates needed to solve the problem. Since TF,D,logpm are smaller than the input size, the complexity of the algorithm is polynomial in the input size and the condition number, which means that we can solve polynomial systems over finite fields using quantum computers with any given success probability and in polynomial-time if the condition number κ of F is small, say when κ is poly(n,D).

We also give a quantum algorithm to solve the following optimization problem.

Note that for q=p, Problem (1.1) includes polynomial system solving over Fq as a special case. Problem (1.1) is meaningless for Fq with q=pm and m>1, since Fq cannot be embedded into Z.

We apply our methods to three computational problems widely used in cryptography: the polynomial systems with noise problem (PSWN) [2, 17, 20], the short integer solution problem (SIS) [1], the shortest vector problem (SVP) [4, 23, 6]. We also show how to recover the private keys for the latticed based cryptosystem NTRU with our algorithm. The complexity for solving all of these problems is polynomial in the input size and their condition numbers.

The latticed based computational problems SVP and LWE are the bases for 23 of the 69 submissions for the call by NIST to standardize the post-quantum public-key encryption systems [4]. LWE is another important problem in cryptography and can be reduced to the SIS problem [25]. In theory, our results imply that the 23 proposed cryptosystems can against the attack of quantum computers only if the related condition numbers are large. So, the condition number could be used as a new criterion for lattice based post-quantum cryptosystems.

Let p be a prime and F={f1,…,fr}⊂Fp[X] with r≫n. The PSWN is to find an X∈Fnp which satisfies the maximal number of equations in F. The problem is also called MAX-POSSO [2, 20]. Our quantum algorithm for PSWN has complexity ˜O(n3.5T3.5Flog8pκ2), where κ is the condition number of the problem. The PSWN is very hard in the sense that, even for the linear system with noise (LSWN) over Fp, to find an X satisfying more than 1/p of the equations is NP hard [17, 30].

Lattice-based cryptography began in 1996 with a seminal work by Ajtai [1], who presented a family of one-way functions based on the SIS. The SIS problem is to find a solution of a homogenous linear system AX=0modp for A∈Fr×np, such that ||ˆX||2 is smaller than a given bound. Our quantum algorithm for SIS has complexity ˜O((nlogp+r)2.5(TAlogp+nlog2p)κ2), where TA is the number of nonzero elements in A and κ is the condition number of the problem.

The SVP and CVP are two basic NP-hard problems widely used in cryptography. The SVP is to find a nonzero vector with the smallest Euclidean norm in a lattice in Rm. The CVP is to find a vector in a lattice, which is closest to a given vector. The SIS [1] and LWE [25] are the randomized versions of SVP and CVP, respcetively. Our quantum algorithm for SVP has complexity ˜O(m(n7.5+m2.5)(n3+logh)log4.5hκ2), where n is the rank of the lattice, h is the maximal value in the generators of the lattice, and κ is the condition number of the problem. Our quantum algorithm for CVP has a similar complexity.

NTRU is a lattice-based public key cryptosystem proposed by Hoffstein, Pipher and Silverman [19], which is one of the most promising candidates for post-quantum cryptosystems. Our quantum algorithm can be used to recover the private key from the public key in time ˜O(N4.5log4.5qκ2) for an NTRU with parameters (N,p,q) with q>p. In particular, we show that the three versions of NTRU recommended in [19] have the desired security against quantum computers only if their condition numbers are large.

1.2 Main idea of the algorithm

A key method used in our algorithm is to use a polynomial in Boolean variables to represent the integers 0,1…,b for b∈Z>1. Let θb(Gbit)=∑⌊log2b⌋−1k=0Gk2k+(b+1−2⌊log2b⌋)G⌊log2b⌋, where Gbit={G0,…,G⌊log2b⌋} is a set of Boolean variables. Then, the values of θb(Gbit) are exactly 0,1…,b.

For F⊂Fp[X] and Fp={0,1,…,p−1}, we use three steps to reduce the problem of finding a solution of F in Fp to a B-POSSO. (1) F is reduced to a quadratic polynomial system (MQ) F1 by introducing new variables. (2) Each variable in F1 is expanded as xi=θp−1(Xi) and F1 is reduced to another MQ F2 in Boolean variables Xi={Xij,j=0,…,⌊log2(p−1)⌋}. Since F1 is quadratic, the total sparseness of F2 is well controlled. (3) We obtain a polynomial over C from F2 as follows F3={g−θ#g(Ug)p|g∈F2}, where Ug is a set of Boolean variables. It is shown that solutions of F in Fp can be recovered from Boolean solutions of F3, which can be found with the quantum algorithm from [12].

Since all variables are bounded, the objective function o is also bounded, and we can assume o∈[0,u) for some u∈N. We design a novel search scheme to reduce the minimization of o(Y,Y)∈[0,u) to several B-POSSOs. The minimal value of o is found by bisecting the feasible interval [0,u) recursively into subintervals of the form [α,2β) and deciding whether o∈[α,2β) has a solution, which is equivalent to solving the equation o−(α+∑β−1j=0Hj2j)=0 for Boolean variables Hj. As a consequence, we can find the minimal value of o by solving several B-POSSOs.

Problem (1.1) includes many important problems as special cases, such as the polynomial system solving over finite fields [14], PSWN [2, 17, 20, 30], SIS [1], SVP/CVP [4, 23, 6], the (0,1)-programming problem [16], the quadratic unconstrained binary optimization problem which is the mathematical problem that can be solved by the D-Wave System [21], which are all important computation problems and were widely studied.

Comparing to the existing work, our algorithm has two major advantages. First, we give a universal approach to a very general problem. Second, the complexity of our algorithm is polynomial in the inputs size, the degree of the inequalities, and the condition number of the problem. Since the problems under consideration are NP hard, existing algorithms are exponential in some of the parameters such as the number of variables. In this aspect, we give a new way of looking at these NP hard problems by reducing the computational difficulty to the size of the condition number.

The method of treating the inequality constraints with the function θb(Gbit) simplifies the computational significantly. The binary representation ηb=∑⌊log2(b)⌋i=0Bi2i for b is often used in the literature to represent the integers 0,1,…,b. The values of ηb is 0,1,…,2⌊log2(b)⌋+1−1, which may contain integers strictly larger than b and cannot be used to represent inequalities. In [7, 3], the inequality 0≤g≤b is reduced to ∏bi=0(g−i)=0. Our reduction θb(Gbit) is better, which does not increase the degree of the equation and the size of the equation is increased in the logarithm scale, while the method used in [7, 3] increases the degree by a factor b and increases the size of the equation exponentially.

In this section, we give two basic reductions frequently used in the paper: to represent an integer interval with a Boolean polynomial and to reduce a polynomial system to an MQ.

2.1 Represent an integer interval with a Boolean polynomial

It is well known that a polynomial system can be reduced to an MQ by introducing some new indeterminates. In this section, we give an explicit reduction which is needed in the complexity analysis in this paper.

We want to introduce some new indeterminates to rewrite F as an MQ.

Let F={f1,…,fr}⊂Fq[X] be a finite set of polynomials over the finite field Fq, ti=#fi, and TF=∑ri=1ti. In this section, we give a quantum algorithm to find a solution of F in Fnq. Denote the solutions of F in Fnq by VFq(F). For a prime number p, we use the standard representation Fp={0,…,p−1}.

3.1 Reduce MQ over Fp to MQ in Boolean variables over C

Let F={f1,…,fr}⊂Fp[X] be an MQ, ti=#fi, and TF=∑ri=1ti. In this section, we will construct a set of Boolean polynomials over C, from which we can obtain VFp(F). The reduction procedure consists of the following two steps.

Step 1. We reduce F to a set of polynomials in Boolean variables over Fp. If p=2, then the xi are already Boolean and we can skip this step. We thus assume p>2 and set

For any set S, set

Step 2. We introduce new Boolean indeterminates Ui,j and reduce each fibit into a Boolean polynomial over Z. Let t′i=#fibit and let