Quantity vs. Quality: On Hyperparameter Optimization for Deep Reinforcement Learning 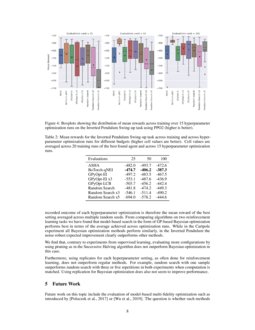 (Loshchilov and Hutter, 2016). However, these methods may require more observations than is often feasible for hyperparameter optimization. Finally, model-based methods such as Bayesian optimization have a principled way to model uncertainty. However, they depend on an acquisition function to decide on the next query point (Picheny et al., 2013). Not all acquisition functions are robust to uncertainty in the observations and especially the most commonly expected improvement is not.

that is the hyperparameter setting λ∗ that yields the largest mean reward across random seeds. The optimization in equation 1 is difficult because f(λ) is unavailable and observations Ψ(λ) are computationally expensive. In particular, hyperparameter optimization faces two problems:

A simple way to approximate f(λi) is to collect repeated evaluations and average the measurements ¯Ψ(λi)=∑Kj=1Ψ(λji). While this approach is conceptually easy, the number of repetitions is often constrained by a computational budget. For this reason, the question is whether repetition is the optimal strategy or if it would be better to just evaluate more hyperparameter settings λi. We now review a number of commonly used approaches to hyperparameter optimization and how these approaches are impacted by uncertainty.

When applying random search in a setting where there is uncertainty, the suggestion of hyperparameter configurations is not impacted. However, the choice of the final recommended configuration may be influenced. In the presence of uncertainty the best observed setting may not be the on-average best setting. This issue can be alleviated using repetition as described in Section 2.2, however at a higher computational cost. In experiments we denote random search as Random Search, Random Search x3, and Random Search x5 for using one, three, or five evaluations, respectively.

. SHA and Hyperband have been shown to outperform random search and state-of-the-art model-based search methods on many hyperparameter optimization benchmarks from the domain of supervised learning. SHA operates by randomly sampling configurations and allocating increasingly larger budgets to well-performing configurations. In the beginning, a small budget is allocated to each configuration. All configurations are evaluated and the top

1/η of configurations are promoted. Then the budget for each promoted configuration is increased by a factor of η

. This is repeated until the maximum per-configuration budget is reached. When tuning neural networks with SHA, the budget is usually the number of training iterations. That way the algorithm can probe a lot of configurations without fully evaluating them. An algorithm that closely resembles SHA is used to tune hyperparameters of deep reinforcement learning algorithms in the Stable-baselines

(Hill et al., 2018) package. We imitate the setup there by using the number of training steps as the resource. We refer to this as ASHA in experiments since we are using the asynchronous version of SHA.

One algorithm from this paradigm that is popular with practitioners is Population-Based Training (PBT) (Jaderberg et al., 2017). In PBT a population of models is trained jointly with optimizing their hyperparameters. Contrary to most other hyperparameter optimization approaches, PBT finds schedules of hyperparameters via perturbation and replacement between generations. PBT has shown strong results in multiple domains including the training of reinforcement learning agents. The crucial difference in the goal of PBT and the goal we are aiming for in this paper is that PBT delivers one optimally trained agent. In this paper we however aim to obtain an optimal hyperparameter setting. While it is possible to trace back the schedule of hyperparameters of the best agent in PBT, we believe that it is less common to share and reproduce these. In addition, due to the fact that PBT finds schedules instead of specific hyperparameter settings it is difficult to accurately compare it to standard hyperparameter optimization methods which find fixed hyperparameters. For these reasons we do not include PBT in the experiments in Section 3.

(Bergstra et al., 2011) and (Snoek et al., 2012) demonstrated the feasibility of using Bayesian optimization for hyperparameter optimization. Bayesian optimization (BO) is a model-based approach to global derivative-free optimization of blackbox functions. Given existing observations of configurations and associated objective values, BO fits a surrogate model from the search space to the objective. This model is usually faster to evaluate than the objective function itself. For this reason, a large number of predictions of objective values can be made. An acquisition function describes the utility of each prediction. By maximizing the acquisition function one can find the optimal next point to evaluate.

As described by (Srinivas et al., 2009), it is common to use a Gaussian Process (GP) as a surrogate model for f(λ). For the covariance kernel the Matern 5/2 kernel is a common choice. Assuming normal observations noise, Ψ(λ)∼N(f(λ),τ2)

this offers a natural framework for uncertainty in observations. Inference for the observation variance

τ2 can be made via maximization of the marginal likelihood. In particular, given a collection of observations C={(λi,Ψi)}ni=1 and a GP prior, one can obtain the posterior distribution at hyperparameter setting λ as f(λ)|C∼N(μn(λ),σ2n(λ)). Assuming a zero prior, the posterior mean and variance are given by:

is the vector of covariances with all previous observations and

K is the covariance matrix of the observations.

where I(r,s)=max(0,r−s) and Ψmin=min1≤i≤nΨi is the minimum observed validation loss. Part of why the EI is popular is that it can be computed analytically. However, if observations are uncertain Var(Ψ(λ)) may be large and Ψmin may just be low by chance. This can result in over-exploitation around Ψmin and the optimization getting "stuck" around this point. In experiments we refer to EI as GPyOpt-EI since we are using the GPyOpt (authors, 2016) implementation. We also show experiments for GPyOpt-EI x3, referring to EI with averaging across three repetitions for each hyperparameter setting.

We note that Equation 3 and 4 are both computationally intensive and non-trivial to implement. However, Letham et al. (2019) showed that NEI outperforms regular EI on objective functions with Gaussian noise and given the true variance. In our experiments we use the qNEI implemented in BoTorch111https://botorch.org/ to calculate the noisy expected improvement. Contrary to the experiments in (Letham et al., 2019) we infer the variance τ2. We refer to this approach as BoTorch-qNEI.

An alternative to the EI criterion is the Lower(/Upper) Confidence Bound (LCB) criterion (Srinivas et al., 2009). The LCB takes the form

where β is a coefficient set by the user. This coefficient is sometimes termed the exploration weight. Tuning the exploration weight may improve the performance of LCB. However, since in practice the computational budget to tune this parameter is rarely available, we use a default value of β=2. While LCB has been shown to be outperformed by EI on noise-less objective functions (Snoek et al., 2012), contrary to EI it is not impacted by uncertainty in the observations. This is due to the fact that it only depends on the posterior mean and variance. In all experiments we refer to LCB as GPyOpt-LCB.

While the choice of acquisition function determines how to choose the next point, one still needs to pick a best setting at the end of the optimization. In the noise-less case this is often done by picking the best observed hyperparameter λi. Frazier (2018) suggested to rely on the GP model and pick the best predicted λ. Since this approach is robust to uncertainty we use the predicted best λ in all experiments. To make this feasible in multi-dimensional tasks we find the best predicted by optimizing an LCB acquisition with β=0, thereby utilizing existing optimization tools in BoTorch and GPyOpt.

First, we compare the introduced algorithms on the cartpole balancing task. The cartpole task (Barto et al., 1983) is a continuous control problem that requires to balance a pole on a friction-less cart. The cart can be moved left or right. A screenshot of the task is shown in Figure 1.

The cartpole task has been used as a benchmark for reinforcement learning (RL) algorithms (Duan et al., 2016) and most recently to benchmark hyperparameter optimization for reinforcement learning (Falkner et al., 2018; Balandat et al., 2019). We tune the hyperparameters of the proximal policy optimization algorithm by Schulman et al. (2017). For this we use the implementation from Stable-baselines (Hill et al., 2018) and the Cartpole-v1 environment from OpenAI Gym (Brockman et al., 2016). In particular, we optimize the log-learning-rate (uniform [−5,−1]) as well as the entropy-coefficient (uniform [0,1]), discount-factor (uniform [0,1]), and likelihood-ratio-clipping (uniform [0,1]). The RL agent is trained for 30000 steps and we use the mean reward across training as the objective for the hyperparameter optimization.

As a second experiment, we consider the Inverted Pendulum Swing-up task. Just like the Cartpole balancing task from Section 3.1, the Inverted Pendulum Swing-up task is a classic control problem. A screenshot of the environment is shown in Figure 3. The friction-less pendulum (red) starts in a random position with random velocity and the goal is to keep it standing up. To achieve this the agent can apply negative or positive effort to the joint. The reward is a function of how upright and still the pendulum is.

In comparison to the Cartpole balancing task, this problem is considered more difficult. We again apply the proximal policy algorithm by (Schulman et al., 2017). This time the hyperparameter search-space consists of the log-learning-rate (uniform [−5,−1]) and the log-entropy-coefficient (uniform [−5,0]). The agent is given 2×106 timesteps for training. The hyperparameter optimization objective is, as before, the mean reward across training.

Figure 4 shows boxplots of mean rewards across training over 15 hyperparameter optimization runs. The hyperparameter optimization is again allowed to train 100 agents. Additional evaluations are again done after 25 and 50 trained agents. It can be seen that after 25 evaluations all algorithms perform similarly except for Random Search x5 which performs worse. After 50 evaluations BoTorch-qNEI clearly performs better than all other algorithms. This trend continues after 100 evaluations and except for BoTorch-qNEI no clear difference can be seen in the performance of the different algorithms. In terms of the median GPyOpt-LCB still performs second-best, however the distribution of its outcomes is very overlapping with that of the other methods. Table 2 shows corresponding means, nevertheless we believe that it is important to consider the distribution of outcomes for each method and believe Figure 4 better represents the results of this study.

We evaluated different hyperparameter optimization methods on two reinforcement learning benchmarks with the goal of finding hyperparameter settings that perform well across random seeds. The recorded outcome of each hyperparameter optimization is therefore the mean reward of the best setting averaged across multiple random seeds. From comparing algorithms on two reinforcement learning tasks we have found that model-based search in the form of GP-based Bayesian optimization performs best in terms of the average achieved across optimization runs. While in the Cartpole experiment all Bayesian optimization methods perform similarly, in the Inverted Pendulum the noise-robust expected improvement clearly outperforms other methods.

We find that, contrary to experiments from supervised learning, evaluating more configurations by using pruning as in the Successive Halving algorithm does not outperform Bayesian optimization in this case.

Furthermore, using replicates for each hyperparameter setting, as often done for reinforcement learning, does not outperform regular methods. For example, random search with one sample outperforms random search with three or five repetitions in both experiments when computation is matched. Using replication for Bayesian optimization does also not seem to improve performance.

Future work on this topic include the evaluation of model-based multi-fidelity optimization such as introduced by (Poloczek et al., 2017) or (Wu et al., 2019). The question is whether such methods are better able to delineate noise even for partial evaluations of hyperparameter settings. Another direction for future work is to better model the observations of the objective, specifically with regards to the noise distribution. As mentioned before, NEI depends on the assumption of Gaussian noise and its performance may deteriorate if the observation noise is significantly non-Gaussian.